Tuning into the Swing Era

The Civic Light Opera of South Bay Cities (CLOSBC) opens a fun musical show this week that features close vocal harmonies from a past era, which include holiday songs known to all, and cute comedy suitable for all ages. The cast of “1940’s Radio Hour” is an eccentric group of 11 wannabe radio stars.

Musical revues can seem like an easy way out if theaters present them and offer little more than a collection of unrelated songs. After all, if you go a step better, and dish up a “Dreamgirls” or “Jersey Boys,” you’ve got some strong material and a storyline in which the viewer can emotionally invest. “Harps […]

ArcLight offers reserved seats, but if you’re late, you lose

ArcLight Cinemas in El Segundo (formerly Pacific Theaters) is taking a contrarian position on the recession. Instead of trimming services and ticket prices, they recently completed a $6 million upgrade, and will be charging up to $13.75 a ticket.

The fate of “Gone With the Wind” hangs in the balance “Moonlight and Magnolias,” Joel Bryant is explaining to me, “revolves around [producer] David Selznick calling in Ben Hecht, one of the quickest punch-up screenwriters in the late ‘30s, and then calling in [director] Victor Fleming as well, pulling him off of ‘The Wizard of […]

Nominations for the Ovation Awards, the highest honor for Los Angeles theater companies, were announced on Monday evening at the Autry National Center for the American West, and L. Trey Wilson’s “Something Happened,” which received its world premiere at Pacific Stages in El Segundo, came away with four nods: Best Production of a Play [Intimate […]

Blast from the past

A look back on the centennial of a great explosion and a ‘trial of the century’ for capital and labor A century ago, the City of Los Angeles was caught in the middle of an escalating struggle between labor and capital. Something had to give — and it did. On Oct. 1, 1910 a strong blast […]

Fog flows in the room from windows that mysteriously open by themselves, lights dim, chairs move for no apparent reason, all of this and much more are on tap in the Westchester production of “Dracula.” Directed by Shawn K. Summerer, this is among the finest productions I’ve seen in a long time. Based on the […]

The play’s the thing, someone or other said, but then so is the production. This one, at the Mark Taper Forum through Oct. 17, being innovatively imagined and directed by Gordon Edelstein, comes courtesy of The Long Wharf Theatre and it features three of the original four cast members – Judith Ivey as Amanda Wingfield, […]

Well, it’s like this, “Beehive” is a musical revue that tips its hat to an era, or at least a decade, and to many of the prominent women – the girl groups of the 1960s, and the solo artists as well – who may today be remembered with a smile (Connie Francis), a shake of […]

A few drops of heaven

Seeking justice or demanding revenge? From the slightest remove, these two aggressive qualities can be hard to distinguish, one from the other. And, as we see all too clearly in “Elektra,” which the Greek playwright Sophocles wrote in 413 or maybe 412 B.C., revenge mostly arrives in the packaging of violence, and of course violence […]

Do the do at Civic Light Opera, Redondo Beach Performing Arts Center

The current buzz throughout the South Bay is next week’s anxiously awaited opening of Civic Light Opera of South Bay Cities’ (CLOSBC) production of “Beehive: The ‘60s Musical” at Redondo Beach Performing Arts Center. Audience members will swarm to hear the six queens in the cast drone through memorable girls’ songs made famous by memorable girls (all named “Honey”) during the 1960s.

We have all heard of musicals whose advertising claims to “make us laugh, cry, and think.” On the contrary, “Les Misérables” is a musical known to make you cry, cry, and cry some more. At some points you may be crying from laughter, or maybe just crying because of the pure beauty of it all, […]

Aerospace Players put on “The Producers” 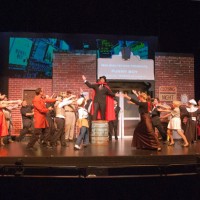 Watch out Broadway, there’s a rising cast of singing and dancing… rocket scientists?