The Beach Cities have never been much of a destination when it comes to authentic Asian food. The landmark Chinese restaurant in the 1960s was Manhattan Beach’s Tai Song, which was more famous for ornate architecture than the taste of their tomato beef, and the food at Redondo’s Polynesian was assisted considerably by the several mai tais you consumed before ordering. Hermosa offered Fook Gin, the seedy Chinese joint that was a hangout for poets in the 1960s and punk rockers in the 1970s. Fook Gin was a beloved institution, and locals were saddened in the 1990s when it closed. Within weeks a new place was open there — Hermosa’s first Thai restaurant, Thai Top.

I remember visiting the place shortly after the change and being unimpressed by the food, which was unusually mild – it was gringo Thai, probably deliberately muted to suit a neighborhood that was unsophisticated about authentic flavors. The restaurant had been cleaned up and had a scruffy charm, but besides convenience there wasn’t much of a reason to go there. 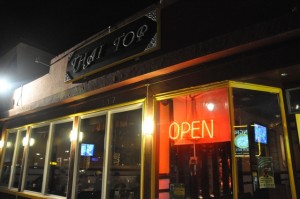 My most recent visit was almost an accident – three of us had planned to go to a restaurant down the street, but were dissuaded by a long wait and a decibel level approaching a jet engine. I thought of Thai Top – and wait, hadn’t I heard from friends that the place had gotten much better lately? It was time, I decided, for a return visit.

The interior has gone upscale, painted in cool tropical colors with stylish accents and a tall wooden screen braided with fabric, but they hadn’t become completely modern – the sound level was low, the lighting subdued. We decided to start with chicken larb, the spicy northern Thai dish of ground meat with lime and chili, then turned our attention to the wine list. It was not inspiring, several reds and a big California Chardonnay that wouldn’t complement this cuisine, but the corkage was modest so I nipped across the street to the Uncorked wine shop to pick up a more interesting bottle. They recommended a Fallegro Favorita, a slightly effervescent Italian white that I had never heard of before.

I got back with the wine just in time to have it open before our starter arrived, and as it turned out the bottle was an excellent match for both that dish and the items that followed. We had asked for the larb, traditionally a very spicy dish, to be made medium, and were glad we did because the spice was still assertive. It was a showcase for the hot, very tart flavors that are popular in northeastern Thailand where this dish originates. The fresh flavors were bracing and authentic, with a fair portion of green salad for the times that the heat built up. The only thing that might have improved it was a dash of the crispy rice powder that is traditionally served over larb – it adds a toasted flavor and crunch that finishes the dish.

We continued with a house specialty of eggplant with shrimp and scallops in spicy sauce, the fried flat noodle called Pad Kee Mow, steamed spinach and tofu with peanut sauce, and barbecued spare ribs. We had asked for the eggplant dish to be served “American hot,” which is several notches below Thai hot, because we wanted to see how spicy it might be – remember, on my previous visit the flavors had been pallid. Everything was full throttle now, and the first impression we had of the dish was more of chilies, the sharp herb called holy basil, and bell peppers than seafood or eggplant. After the first bite the balance of the dish became more apparent – big, bold flavors overlaying the slightly smoky eggplant, with the seafood mild and subtle in the background. It’s a dish I’d have again, though I’d probably ask for it medium next time as it was actually too spicy for one of our party.

We cooled down the fire with brown rice and bites of the spinach and tofu, which were unspiced and came with a mildly sweet peanut sauce. The flavors were simple but satisfying, an antidote to the complex intensity elsewhere in the meal.

The flat noodle had been ordered medium and was fine just as it was, the sauce over the mix of chicken, noodles, and broccoli peppery but not overwhelming. This showed a strong Chinese influence, not surprising since Thailand has a large Chinese population and ancient trading ties with the giant to their north. The ribs also showed this influence, served in a sweet Cantonese-style sauce. I had enjoyed pork ribs in a curry-inflected sauce in central Thailand and was hoping for something more like them, and though these were tender and meaty, I probably wouldn’t order them again.

As we dined we marveled again at how well the wine went with this cuisine that is usually served with beer. I usually select a Riesling or Gewurztraminer with Thai food, but this Favorita was every bit as good, if not better. Thailand actually produces a small amount of wine of mediocre quality, prized by tourists because of the unusual dating – Thailand uses the Buddhist calendar, so you can try a wine from the year 2553 without time travel. I have sampled it, and can only say that the bottle is a better souvenir than the contents.

Our bill at Thai Top was modest – under $70 for enough food for four, including the five dollar corkage fee, and the experience was pleasurable. This quiet oasis on upper Pier is not exploring groundbreaking original or regional dishes – the owners are from cosmopolitan Bangkok and serve their own cuisine. They do a very decent job of serving that fresh, flavorful food with friendly service and fair prices, and they have carved out their own niche in the South Bay.