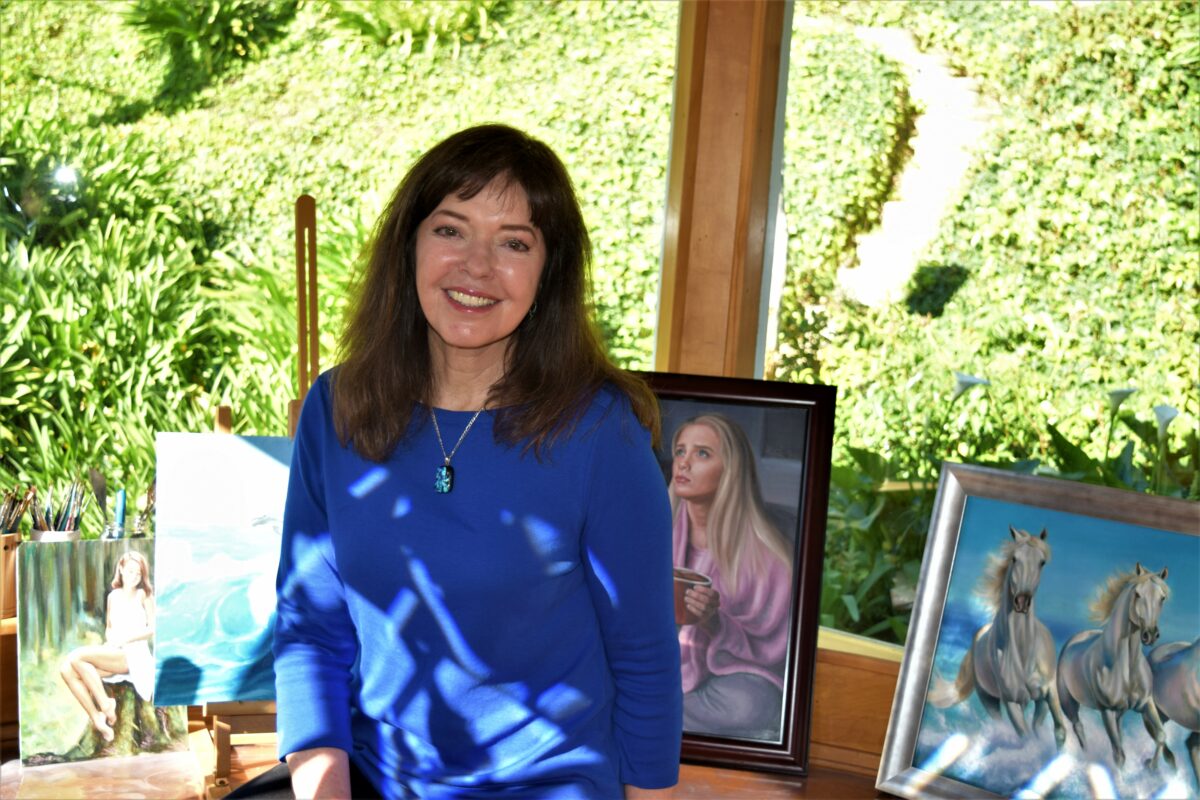 Portrait of a portrait artist

If it has a face, Susan Whiting can paint it

It’s possible you’ve had your portrait done by Susan Whiting and don’t know it; and if not you then maybe a family member or good friend. None of you might suspect that the drawing, whether on the wall or tucked into a desk drawer, was created by her. How can that be? Well, I’ll get to that shortly.

Susan’s family, which included four brothers and a sister, moved from Palos Verdes Estates to behind the gates in Rolling Hills when she was 11, by which time she was already horse crazy. “I just wanted a horse so badly,” she says, and the family’s new home enabled that desire to become a reality. 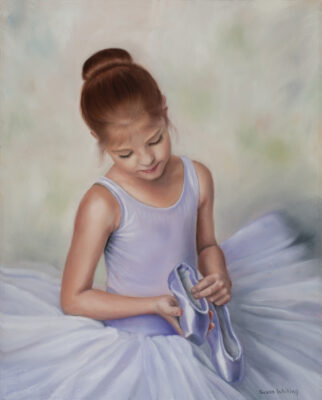 Despite what seems like an ample household, “I was a really lonely child,” Susan says, “so I used to draw imaginary friends. It’s somewhat isolated living inside the gates, the houses are so far apart.”

Susan was among the first students to attend Palos Verdes High School when it opened in 1963. A year later, as a sophomore, she was transferred to brand new Rolling Hills High (Peninsula High), from which she graduated in 1967.

From Rolling Hills she went to college in San Diego as a dance major, presumably by car and not on horseback, then switched to UC Irvine “because they had a really good dance department.” Fate stepped in, however, and this will also answer the question posed in the first paragraph:

“Disney hired me as a portrait artist. I was 20, and it was 1970, and I was a pastel portrait artist on Main Street for eight years. I literally drew thousands of people. It was a good experience for me, but I was kind of glad when it was over because it didn’t have a future.” 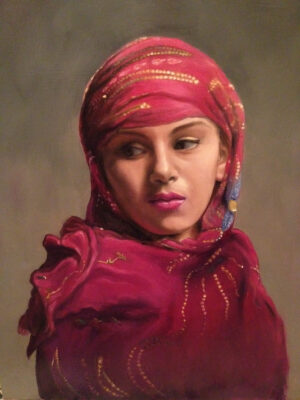 Perhaps not so surprisingly, Susan graduated from UC Irvine not in dance but with a BA in art.

“Then I took a break and raised five kids; I had two and I raised five. When I was married I lived in San Diego. My husband was in the McDonald’s business, and so I used to do portraits for charity. I would just donate them; and I did portraits for friends. When my husband died I came back (to the Peninsula) to take care of my mom who was elderly, and I took care of her from 2011 to 2017, when she passed away. And of course I met Chris”—her significant other with whom she lives near the very top of Rancho Palos Verdes.

Soon after returning north from San Diego Susan found out about the Palos Verdes Art Center. “I immediately signed up for a class because that was my sanity. When you’re caregiving you really need to create a time [for yourself and your art]. If you’re an artist you really need that.” So she studied with Lance Richlin for five years. Richlin is a master of realism, and the detail in his work is exquisite.

As for her children, Susan’s daughter now lives in North Carolina and her son lives in Santa Barbara. “We stay in touch, we’re really close,” she says. “I feel like raising my kids was the biggest accomplishment of my life. So now I just want to do art!” 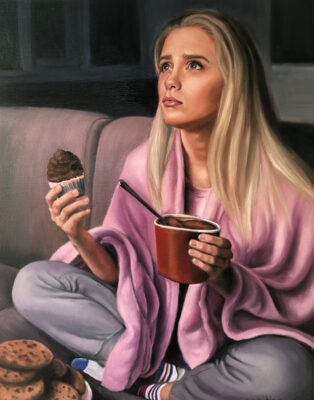 “The Chocolate Night,” by Susan Whiting

She’s always done portraits, and one doesn’t need to look twice to see that Susan can capture the essence of every emotion. Her portrait of a sad young girl, overindulging in rich desserts after, quite likely, suffering a romantic setback, is the subject of “The Chocolate Night,” one of two grand prize winners in the recent “Are You Thinking What I’m Thinking?” art show in the Malaga Cove Library. But right now she’s looking to branch out and is studying with Debbie Giese: “She’s getting me to loosen up and use bigger brushes. But I love detail,” she adds; “I love realism.”

Her studio, in the backyard, is like a castle turret minus the castle. Formerly, it served as a kind of miniature aviary. The space is tight but nicely equipped, and it’s in an idyllic setting: “I love being able to look out and see nature,” she says, and sure enough we see birds, a squirrel, and are briefly joined by her cat. 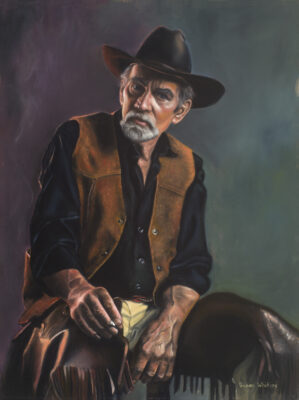 Asked about her favorite artists, Susan doesn’t hesitate. “Norman Rockwell and Michelangelo. It may seem like an odd duo, like pairing Nancy Drew with James Bond, even though both are in the business of espionage. But there’s a softer touch in Susan’s portraits, and you’ll be hard-pressed to find a harsh line. All those years of drawing in pastel at Disneyland seem to have influenced her approach to art in whatever medium she employs.

Some artists, and Lance Richlin is one of them, insist on painting from life, but most of Susan’s work is derived from carefully chosen photographs. “I’ve worked from life,” she says, “but not often because people just don’t have the time to sit for you.” She points to one picture she’s in the process of completing. “To do a portrait like this, just for the face alone, takes several hours.” Ideally, she continues, she’d like to work from life but also have a photograph on hand for reference. “Then I can see their eye color and get a sense of their spirit and their personality.” That last comment also refers to non-human subjects, and not just horses. “I’ve done portraits of dogs for people. If it has a face, I’m there. I love it.” 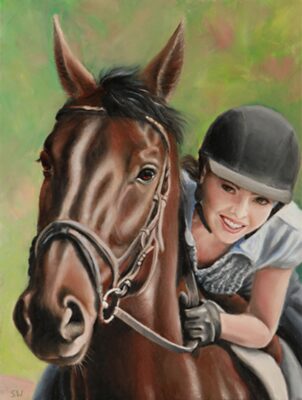 “Jumping for Joy,” by Susan Whiting

As for those decades of drawing or painting horses, well, that’s paid off handsomely, especially when it’s come to having her work adorn posters for the Portuguese Bend National Horse Show, held at Ernie Howlett Park in Rolling Hills Estates. For the first year of that annual event Susan submitted three paintings. “They won 1st, 2nd, and 3rd—and so they had to change the rules.”

Although she’s venturing out in her choice of subject matter (she mentions wanting to do more pictures with an ocean or aquatic theme), we’re unlikely to see panoramic crowd scenes in Susan’s future paintings. The reason for this is fairly straightforward: “I personally prefer things more closeup. I love the intimacy of feeling like, yeah, I could actually have a conversation with this guy.” She points to another work in progress. And this seems true, because one could almost reach in and pet the dogs or feed an apple to the horses in her pictures. 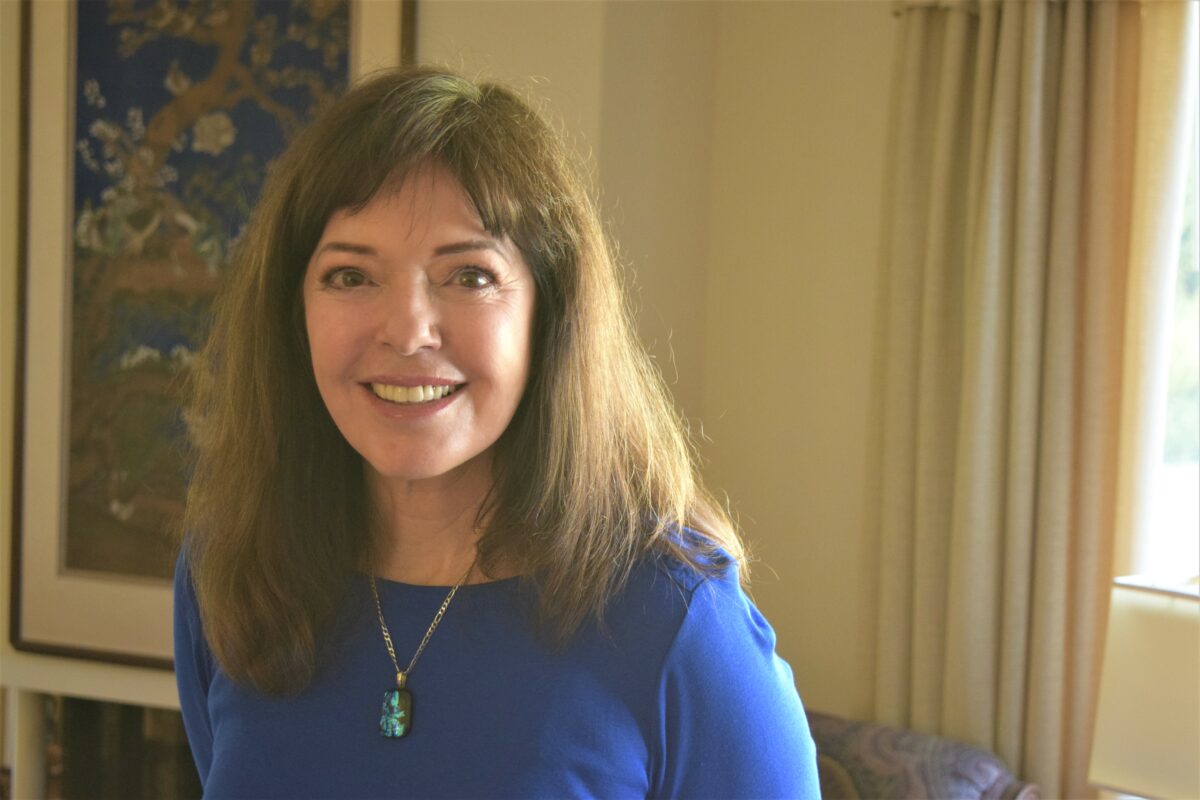 As with her pastel-like painting this could be traceable to her years on Main Street, producing dozens, hundreds, and then thousands of drawings, and required to do so in a relatively short amount of time. “They wanted us to do them in seven minutes. I never could, because I wanted to get a likeness. So it took me 15 or 20 minutes. I was not fast.” I’m guessing that the client didn’t really mind if the result met or surpassed expectations.

“I’m really good at painting portraits, and I do a lot of them on commission. But what I now want to do is to have my paintings tell a story.” 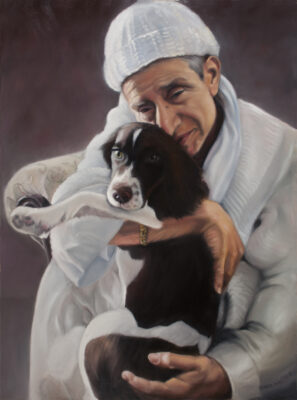 Whatever one’s opinion of Susan’s paintings, the sensitivity behind them is unmistakable. This is a woman who cares deeply about simple things, innocent things, and the vulnerable members of society. “I can’t watch anything violent on TV because I feel it in my body and I get upset.

“When I was living in San Diego we were involved with the Polinsky Children’s Center, which is a place where abused children were taken until a safe place could be found for them to go. They were taken away from their parents for one reason or another. I did an art therapy (program) with them for about two years, and it was so rewarding.” Susan describes how she helped them, through art, to feel more secure and self-confident. “It’s something I’d like to do more of in the future, to work with kids, to help them heal their traumas, (and to help them find) a safe place to express their feelings. It really bugs me when kids are hurt. I hate that.”

It’s rare to find someone with such a big, caring heart, but somehow it’s always evident in her paintings. And as for her art, going forward? 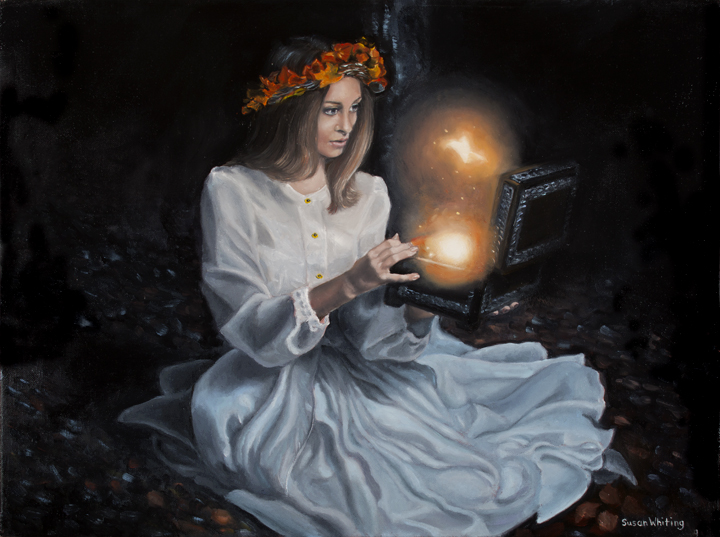 “I love to do commission work,” Susan replies, “but I haven’t done so many this last year with the pandemic. I’m going to keep on painting; it’s just who I am. And I plan to keep on studying. You know, you’re never there. When you’re an artist you’re never done. There’s always more to learn. So I want to learn everything I can, and explore other forms of art.”

Perhaps it can all be summed up in these few words: “Art is a journey of self-discovery and personal growth,” Susan says. “It’s just been a gift for me, and it’s a gift I would love to share.”

To reach Susan Whiting, call (858)382-7553 or email swhiting50@yahoo.com. Her website is SusanWhitingPortraits.com. PEN