The Bull Pen: a No Bull, Beach Institution 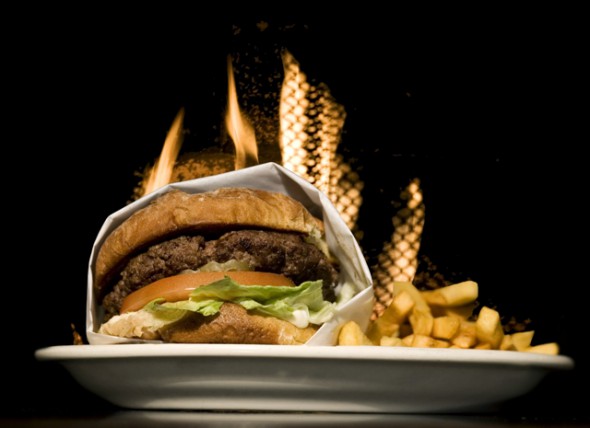 The bull Pen Burger was perfected at birth, five decades ago.

When we asked Paula, our server at the Bull Pen, what had changed in the last 20 years, she had to think a moment. “The honey mustard dressing – that was added 10 years ago,” she finally replied. “The crabcakes were about eight years ago, and they’ve added a few bottles at the bar. Other than that, nothing.”

Welcome to the South Bay’s favorite time warp, a place impervious to trends. The Bull Pen has been around for 50 years, and though the their current location is actually their third, it feels like it has always been here. The high leather booths, piano bar, and clubby atmosphere make it feel like a Rat Pack hangout.

The menu here fits the Bull Pen name – mostly steaks with a few seafood choices, and lamb, chicken and pork grills offered for contrarians. Most meals include soup and salad. And the choices here are distinctly old school as well – the salads are made with iceberg lettuce, with slices of beet on top if you want them – no sprouts, arugula, heirloom tomatoes, or other hip ingredients. That said, it’s a good salad because the dressings are homemade and taste like it. The blue cheese is rich with just enough sharpness and funkiness to let you know it’s there, and the French was tangy with vinegar and herbs.

Paula consented to bring a taste of the soup, a beefy bean soup she described as somewhat like a mild chili. It had the slightest hint of chili flavor in the background, but the dominant notes were of the beef and lightly seasoned broth – good simple comfort food with no frills. 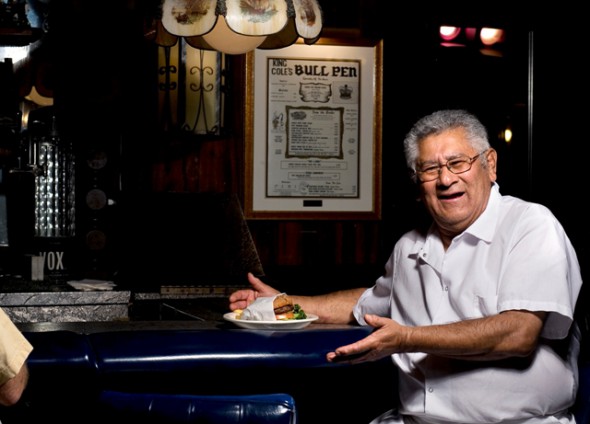 Bullpen chef Joe Wilcox has presided over the Bull Pen kitchen for over four decades.

We were looking at the wine list when I noticed that one side of a table tent had a listing of modestly priced dinners, including a 10-ounce New York steak for $15.95. One of our party who has a small appetite perked up when she saw this; she had already ordered a meal that she knew she couldn’t finish.  When Paula next came by she said she thought the order could be changed, and she practically ran to the kitchen to do so. These dinners really should be more prominently displayed – I have been with people who looked at the menu offerings posted outside and left because everything sounded intimidating.

When the dinners arrived, it was clear that they were in 1950s sized portions. We had ordered a New York pepper steak, tournedos of filet mignon with Béarnaise sauce, the small New York steak, and a plate of chicken livers sautéed with mushrooms. My wife is always delighted when chicken livers are available, but I can generally do without them. I found these palatable while she found them delicious – they were moist and tender with some herbal flavor that gently modified the liver flavors, and I even ate two pieces, which is about as high a praise as I can give.

When our diner of small appetite saw the 10 ounce New York she was glad she hadn’t ordered the larger one; the steak and baked potato were quite sufficient and some went home in a take-away box. I snagged a bite and found it to be tender and flavorful, a good steak at a good price.

We had ordered the pepper steak with some trepidation because we usually like the version with a brandy-peppercorn sauce, while this involved a cooked-down mix of green pepper, black pepper, scallions, and bacon. Paula had warned us that it was spicy, and it was, with a complex, powerful heat worthy of Thai or Korean food. If you like spice consider this an endorsement, and if not consider it a warning. If you do order it, you might consider the rice pilaf as a side, since it helps cool things down better than the baked potato.

The tournedos were a slightly smaller steak but a more filling meal, thanks to the rich béarnaise sauce and big mushroom caps.  This isn’t too surprising given that béarnaise is mainly composed egg yolks and butter – you could consider this the ultimate high style steak and eggs breakfast if you were so minded. It was as rich and luxurious a sauce as any I’ve had, with shallot and tarragon giving just the right scent and flavor of herbal sharpness. A smaller portion is offered among the $15.95 dinners and though I finished it this time, I might order that next time and have room for dessert. I had no such space this time, save for sipping the last of our bottle of Ravenswood Zinfandel.

Our meals had run from $14 to $23. The chicken livers were the least expensive and the pepper steak the most. We felt we had good value from all of them. I can get cheaper steaks in the area but not better. They have a lot of practice at what they do here, and the friendly, professional service and classic ambiance sealed the deal. The Bull Pen is a local institution that has resisted the temptation to rest on their laurels – they are still contenders after 50 years in the business.