The case of the 70-year-old RUHS ring 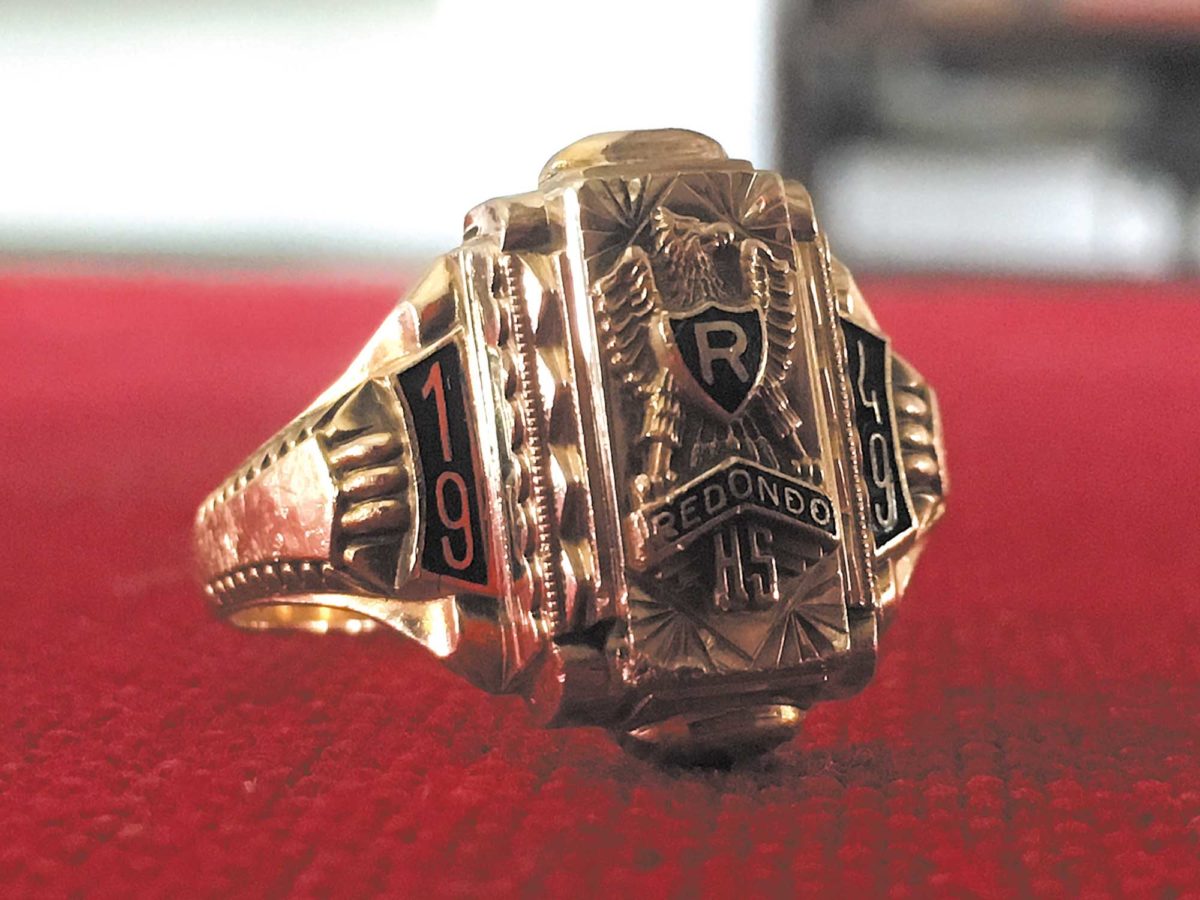 This Redondo Union High School class ring, dated 1949, was found off the shores of Hermosa Beach in July, bearing the initials M.L.G. Photo by David Mendez

A mystery abounds as Redondo Union High School historians have fruitlessly attempted to find the original owner of a 1949 class ring that washed up on the shores of Hermosa Beach two months ago. Though researchers from both the school archivists and the RUHS Alumni Association have turned over a series of leads, none have panned out.

The search began on July 18, when an email popped into Alumni Association President Augustin Garnier’s inbox. One day earlier, an LA County Junior Lifeguard found a ring in the Hermosa Beach sand and turned it into Lifeguard and JG instructor Heidi Nelson. Unable to find an inscription, Nelson handed the ring and the search over to Garnier.

“It’s a classic art-deco style…you need a magnifying glass to really see the craftsmanship in it,” Garnier said.

The ring itself has seen better days. Dents and scratches abound, marring its detailed lines. Dings on its edges resemble bite marks, as if someone was proving the soft metal was actual gold. But for all of its wear, the school’s name and symbols — the Sea Hawk mascot, bearing a shield with a Redondo “R” — gleam, as do the Class of 1949 markings, and a Jostens maker’s mark.

Garnier set to work, first reaching out through social media, asking if any alumni had lost their class ring. “As it might happen, a lot of people responded,” saying they lost their ring in 1987, in ’74, in 2003. None was the right year.

So Garnier reached out to RUHS archivist Terry Martinez. She took the ring to Seymour Jewelers in Hermosa Beach, where it was steam-cleaned. The jeweler also found a light engraving revealing three initials: M.L.G. Digging into the graduation roster for the Class of 1949 found one match for those initials, as well. Case closed, right?

“But the guy whose initials match the initials in the ring, he and his daughter both claim that he never had a class ring,” Martinez said with a shrug. “There’s always a chance that, in a bit of deeper digging, I’m going to be able to find someone who is not on the graduation roster, but graduated with the same initials. What do you think the chances are of that?”

A Jostens employee who is not empowered to speak for the company said the ring maker doesn’t have records from 1949. Other representatives from within the company didn’t return calls by press time.

The search has hit a dead end. But the ring will have its home, set in displays of Redondo’s Alumni House alongside other class rings and memorabilia donated by RUHS graduates.

“The fact that the ring is coming back to Redondo is enough of a closure,” Martinez said. “We don’t always get a perfect ending. If there’s an ending to be found, I’ll find it, but it made its way back to campus from the sands of Hermosa Beach.”