The case of the mysterious Telecaster 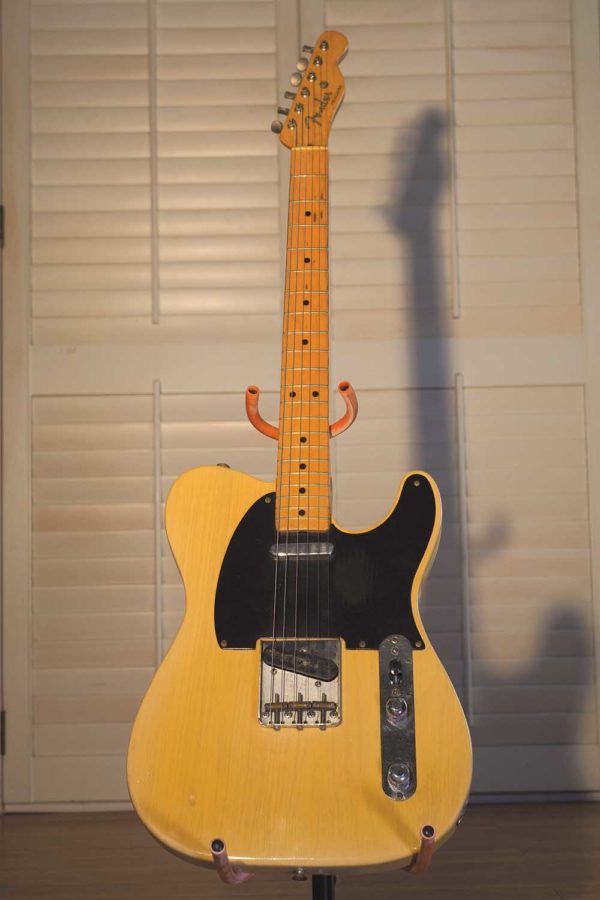 The 1952 Fender Telecaster that found its way to Dietz Brothers Music. Photo by Conner Griffin

It all started with the death of a friend. Two years ago, Marilyn Newhart passed away, and named Pat Dietz executor of her estate. She’d been an architectural writer and a no-nonsense sage, and had made all the arrangements, including the hiring of a good estate attorney. When that attorney discovered Dietz ran a guitar shop in Manhattan Beach, he introduced him to two ladies in Torrance who had something unusual and could use his help figuring out what to do with it.

Dietz called them. “We’ve got this old weird guitar,” they told him.

“They kind of knew they had something,” Dietz said. “They just didn’t know quite what.”

When the ladies brought the guitar to Dietz Brothers Music, Pat opened up the case and beheld the splendor of one of the guitars that made Rock ‘N’ Roll possible: a perfectly intact 1952 Telecaster.

“I pulled it out and you could just tell —  the thing about this guitar, it’s beautiful,” Dietz said. “A lot of guitars, the other ‘52s I’ve seen look like somebody’s skateboard. They look so bad. This guitar was not played much. The frets are okay and it plays good. It’s pretty much perfect.”

Dietz is a guitarist, teacher, and retailer, but deep in his heart of hearts he’s also a bit of musical detective. He’s investigated some of rock’s biggest mysteries, including the secret location of Bob Dylan’s leopard-skinned boxing gym and Lucinda William’s slide guitar predilections.

Every guitar has its own life. Dietz found out everything there was to know about the Telecaster. He interviewed the ladies about its history, took the guitar apart himself to examine its every aspect, and even called the foremost guitar expert in the world, George Gruen, in Nashville. This guitar, it turned out, had lived an epic.

First off, something strange had happened at the Fender factory. Somewhat inexplicably, the guitar had been refinished shortly after it was constructed; this did nothing to diminish its value musically, but did so in the collector’s market, dropping its worth from about $40,000 to $25,000. The guitar also had a feature that would be dropped from Telecasters the very next year: it was embedded with a capacitor “about the size of a film can” that was designed so the instrument could be used as a bass as well as a regular guitar.

“It was kind of a good idea, but whenever you plug it in and flip the switch to the neck pick-up, it’s like ‘What the f*ck is wrong with this sound?” Dietz said. “It sounds like a guitar with no treble. It’s very original.”

It was also a window inside the mind of Leo Fender, the legendary founder of the most famed makers of amplifiers and guitars in American musical history. Fender didn’t play guitars, Dietz noted; he was more of an inventor.

The Telecaster itself was an experiment that would soon lead to another invention: rock music. Up until that point, electrified guitars almost all had hollow wood bodies, which limited how loud they could be played —  because of the f-holes on the body of the guitar and air inside, such guitars produced uncontrollable feedback when played through a lot of amplification. Fender wasn’t the first guitar maker to address this issue by making an electric guitar with a solid block of wood inside its body, but as usual, he did it the best. Tellingly, the guitar was originally named the Broadcaster when it was first produced in 1950, but Gretsh made a drum set by the same name and sued to force Fender to change it; for a year or so, Fender factory workers just snipped off the nameplate and the guitar was known as the “Nocaster.” In mid-1951, they began issuing the guitars as Telecasters. The model would become the most popular solid body electric guitars ever made.

“The thing about this guitar, the reason everybody wants it is, one, it sounds great, but also the fact that even though there were other solid body guitars before it, this is the first one that was successful,” Dietz said. “The first successful electric guitar —  it took off.”

“There was no rock ‘n’ roll yet,” Dietz said. “He was not making it so Jimmy Page could play ‘Black Dog.’ He was just trying to make something that was louder.”

Playing loud was central to the creation of rock music, of course, and Dietz notes that this is true throughout musical history —  Lloyd Loar’s innovations with Gibson mandolins in the 1920s allowed Bill Monroe to invent Bluegrass, while the Yamaha’s DX 7 synthesizer keyboard produced first in 1983 gave rise to a decade of synthesized pop music.

“Somebody should sue the guy who invented that thing,” Dietz said.

Maybe the most human trace of history Dietz discovered about the guitar, however, was from the two ladies. The two women’s husbands were brothers, and the guitar had been their father’s guitar. The man’s wife was “one of those people who bought the best of everything,” Dietz said, and her brother happened to be Marshall Lytle, the bass player in the formative rock band Bill Haley & his Comets. The band, it turns out, used to stop by when touring and jam at Lytle’s sister’s house. Bill Haley had always played hollow body, jazz–style guitars, so the Telecaster, Dietz suspects, probably blew his mind.

“He played it many times,” Dietz said. “These guys would be on tour and stop by and party…I can imagine Haley looking at this guitar. It was probably a real curiosity to him.”

The guitar is for sale, but guitar players stop by the shop regularly to pay it a visit. Most guitarists don’t have the same kind of money as collectors so it’s a bit out of their price range, but Dietz says a funny thing happens when they play the Telecaster. They start out mocking the fact that it costs so much, but turned immediately covetous.

“They always start out going, ‘Yeah, dude, you are going to fleece some rich f***er,’ and end up saying, ‘I think I want to buy this guitar. I am dead serious.’ The cynics drop away. It’s funny, because no doubt there is an element of overkill to the pricing of these things, but I defy someone to sit down and play this guitar and say this is not a cool guitar.”

Meanwhile, his favorite part of the whole experience thus far has been the two ladies who as yet still own the guitar. Sometimes he tells them they should keep it, and put it to good use.

“They are so nice, like they are always blessing me,” Dietz said. “I told them, ‘Maybe you gals should keep this thing and start a band. You know, sling it low.’”