“The day you put on a uniform, you are all one,” First Sgt. Ysamin Espat tells young Manhattan Beach Scouts 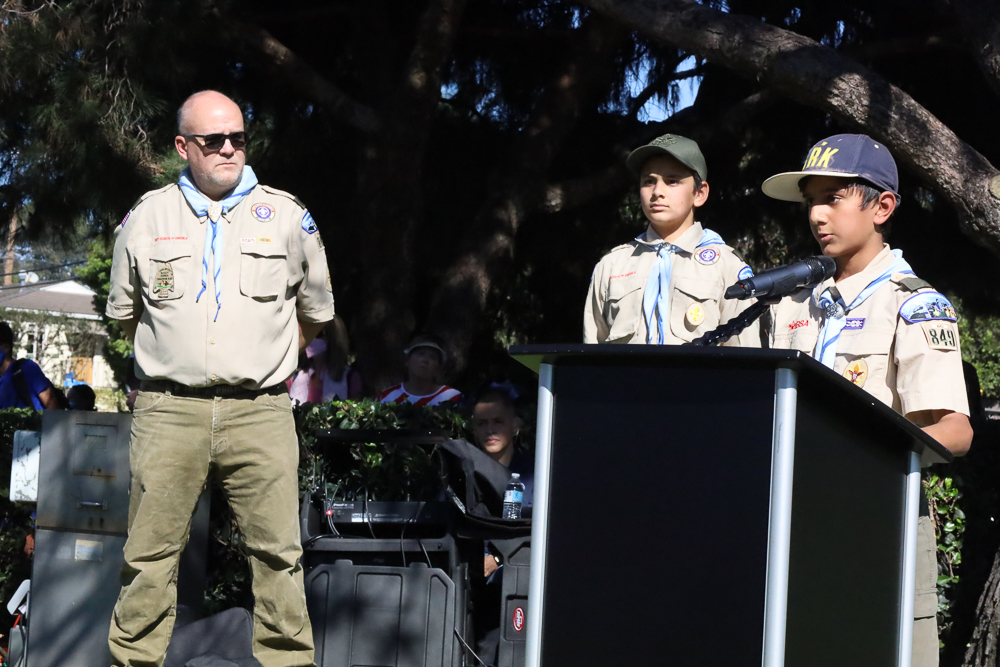 Girl Scout Casey Kaplan, from Meadows School Troop 9805, recalled her grandfather’s stories about being stationed in Germany in 1959, and how 15 years earlier one great uncle landed at Normandy, while her two other great uncles fought in the South Pacific .

Kaplan said her great great grandma prayed every night for the safe return of her three children.

“She prayed that if they came home from the war, she would never taste alcohol in her whole entire life. She lived to be almost 101 and never tasted a drop. Her prayers were answered,” Kaplan said.

Keynote speaker First Sgt., and Boy Scout Troop Leader Yasmin Jerome Espat, arrived in the U.S. from his native Belize when he was 16.

He said he wanted to join the Army to express his appreciation for his adopted country.

“But my wife said, ‘No way.’ She didn’t want me shipped overseas. So I joined the National Guard, and did two tours in Iraq.”

“Veterans Day means a lot to all of us in the military and to our families because we’ve all lost buddies.’ Sgt. Espat said.

He ended his remarks by telling the young scouts, “The day you put on a uniform, you are all one.”

Emcee and City Council member Richard Montgonery noted that the current city council was the first in many years to have or have had family in the military. These included his and Councilman Steve Napolitano’s fathers, and the sons of councilmembers Suzanne Hadley, Hildy Stern, and Joe Franklin.

“Whenever and wherever the nation has called — in times of darkness and danger as well as in times of peace and prosperity — America’s veterans have been there. Veterans have proudly carried the torch of liberty for all to see. ER