The frightfest that was the 2020 Dining Scene 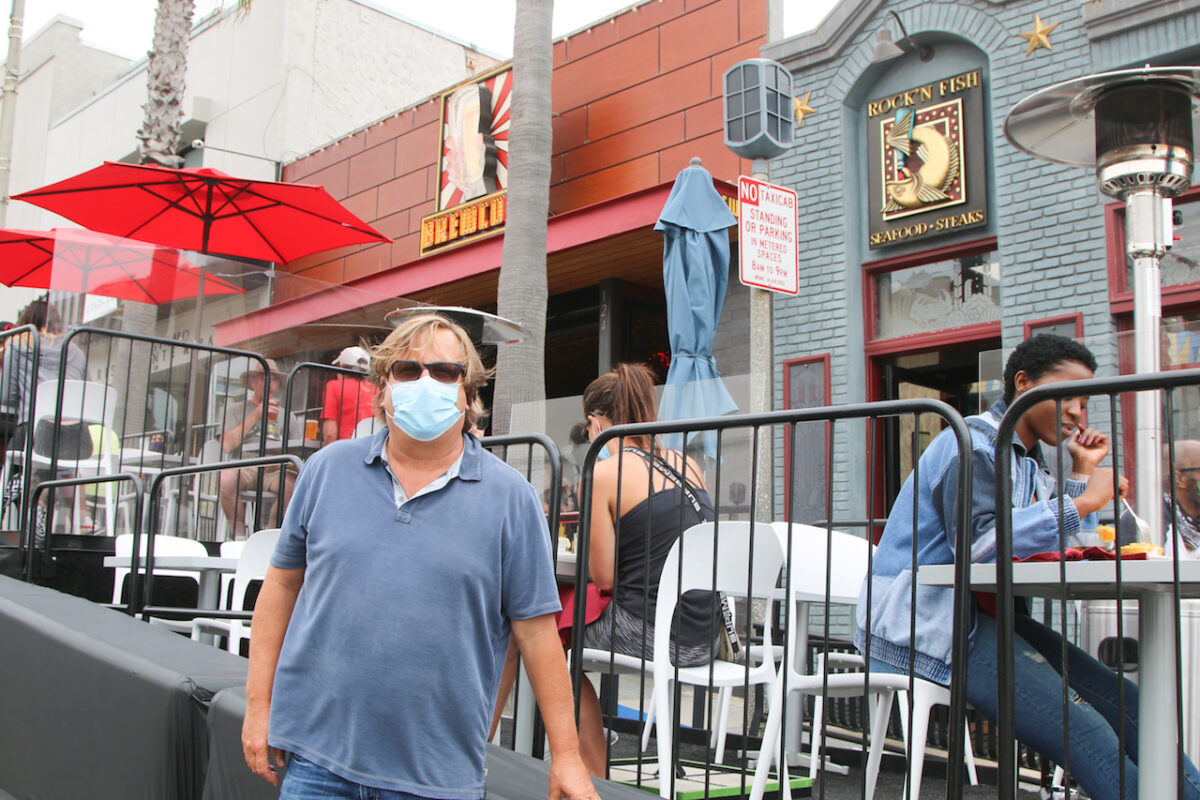 Many classic horror movies start with characters blithely heading for a party or similar happy occasion, when suddenly things turn strange and terrifying. After various travails, they come out the other side scarred, changed, and wiser.

The local dining scene in 2020 fits this scenario almost perfectly. As the year dawned the beach cities were booming, with over 15 new restaurant projects announced. Though Front Porch opened on the Boardwalk in January, the big news was the closure of Abigaile and the announcement that Chez Melange would soon call it a day. February came with a cascade of openings — Matty’s Crawdaddies, Slay Italian, Lucky Seven, Anytime Hawaiian, and Veggie Pub & Grub. Any suggestion that a vegan pub was a questionable concept was brushed aside, because almost any idea could succeed in the South Bay.

Chez Melange’s closing party on February 29  happened a week before the first local transmission of Covid was reported in Los Angeles. Nobody could have known it, but that soiree with a buffet and free-flowing wine was the last big restaurant event of the year. 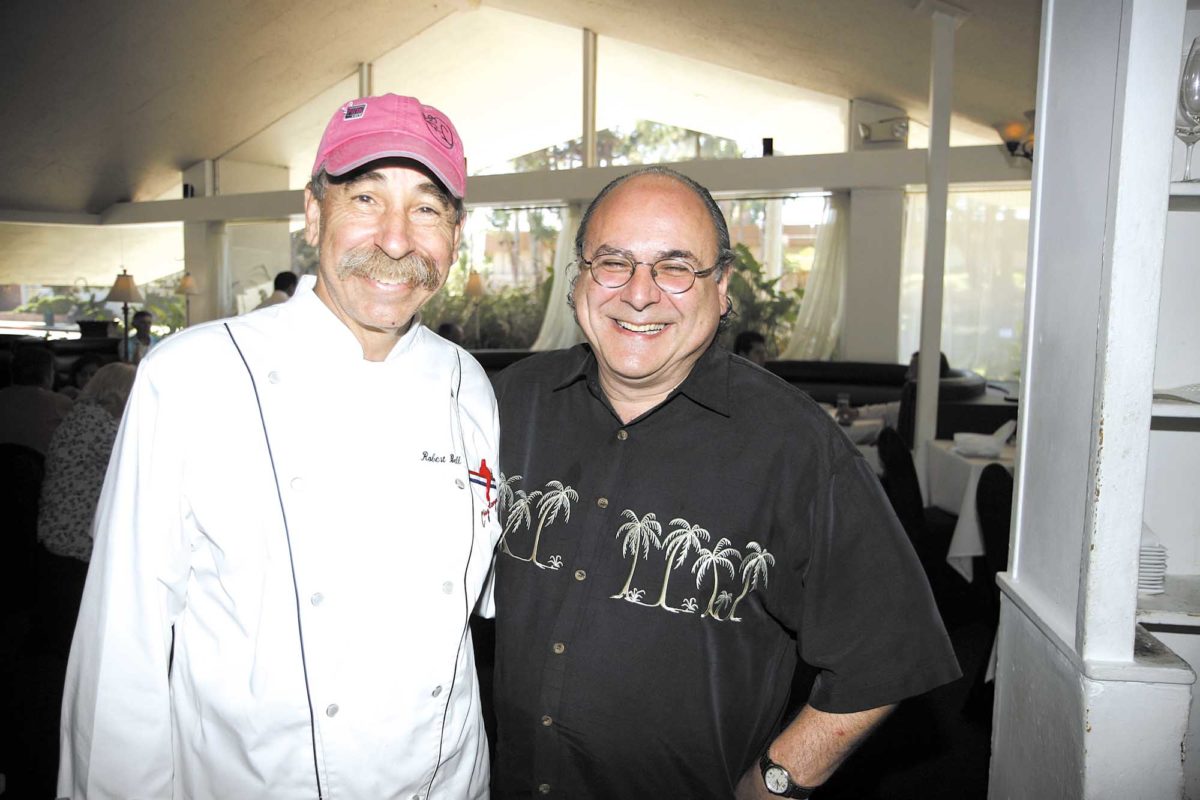 Chez Melange partners Robert Bell and Michael Franks in 2009, on the evening they closed their original location in the former Plush Horse Hotel coffeeshop. Photo by Kevin Cody

A ban on in-house dining was announced on March 16, taking effect the following day. That was St. Patrick’s Day, which left many restaurants with huge stocks of corned beef and Irish beers, among other problems. Some eateries closed to assess their strategy while others shifted to take-out only. A fast-food option that had been popular was unable to take advantage of the situation. The supermarket food bars called “groceraunts,” the hot trend of the previous year, were shut down. Stores roped off those areas and focused on panicked shoppers who stripped the shelves of beans and pasta, which many of our readers are probably still eating. Some restaurants that had large stocks of fresh fish and produce turned into impromptu bodegas, which seemed weird but fulfilled a need. If you told someone two months before that you were going to Fishbar to buy toilet paper, they’d have thought you crazy.

For the next two months most restaurants, whatever they had been serving, offered mainstream American meals for very limited hours. Night owls were shocked to arrive at The Kettle only to find it closed, with no other options for 24-hour dining. Cocktail culture ceased, and some restaurants sold their liquor supplies for cash flow. Front Porch and Veggie Pub & Grub didn’t have the customer base or funding to survive, and closed within a few months of opening. Other entrepreneurs with projects underway reassessed their plans. Esperanza in Manhattan Beach was the first to announce that they would suspend their planned opening, and others followed. There was an atmosphere of uncertainty about whether some existing establishments were closed temporarily or permanently, and rumors flew as the weeks went on. 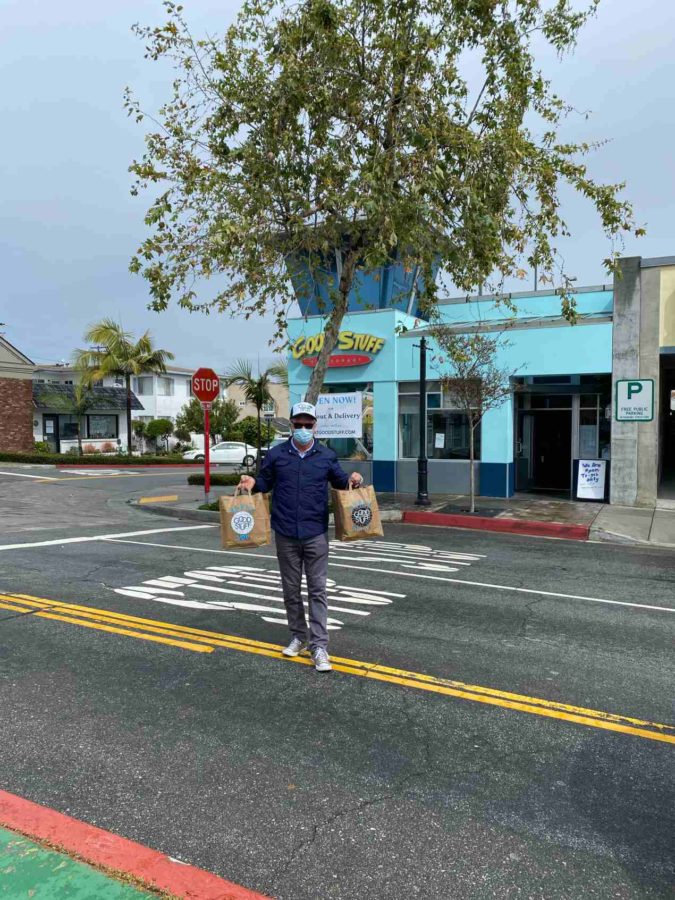 Restaurants with liquor licenses got a lifeline in May when it became legal to sell cocktails to go, though a few had already been doing it surreptitiously. As summer drew near and plans for outdoor dining were debated, some places offered bolder to-go options. HT Grill, one of the few restaurants in a downtown area with a large parking lot, offered drive-in style service where you were invited to eat in your car. It was an idea most of their competitors couldn’t copy, but wasn’t a notable success. As the month wore on some establishments called it quits, including Giuliano’s, Laurel Tavern, Bottle Inn Riviera, and Round Table Pizza, which had nourished generations of high schoolers.

June brought hope as outdoor dining resumed, and some restaurants spent substantial sums to create pleasant patios. The pace varied around the beach cities, with Manhattan and Redondo issuing permits quickly and Hermosa lagging. Most eateries reopened with a fraction of their original capacity, but a few owners who had parking lots or wide sidewalks were able to match or even exceed it. The first city to convert street lanes to dining was El Segundo, but within a few weeks the three neighboring beach cities all had enacted ordinances allowing it. In any other year, eliminating parking near the beach at the start of summer would be inconceivable, but it was not a normal year. 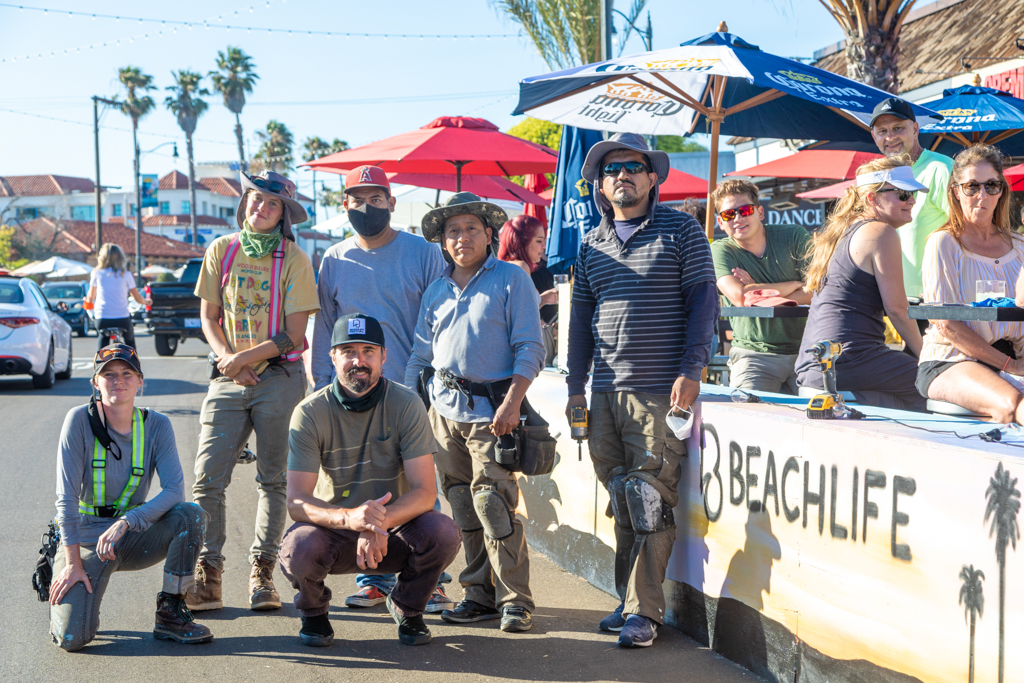 None of these tactics could help restaurants dependent on mall or theater traffic, or that got most of their business from office buildings. Jackson’s Bistro shuttered, business on the Rosecrans corridor slumped, and projects underway at the Manhattan Village Mall went into suspended animation. Caterers suffered even worse as weddings and corporate business evaporated. New York Food Company, the area’s largest caterer, declared bankruptcy.

July was a season of superficial success. The Redondo Pier area, Hermosa Pier Plaza, Riviera Village, downtown Manhattan, and other tourist magnets had brisk traffic. This was less lucrative than usual because while dining areas were full, the tables were widely spaced and closing times were set at 9 p.m.. Live music ceased and customers were politely requested to make room for other patrons at places where they would usually linger over dessert and another round of drinks.

In August, these restrictions were loosened, and restaurant owners became cautiously optimistic. Mia’s and The Source opened in Manhattan Beach, as did the long-awaited Pacific Standard Prime in Redondo. Primo Italia bucked trends by bringing back live entertainment, which was a part of their identity thanks to singing restaurateur Lou Giovanetti. Hey 19, which had done a lively bar trade with entertainment, was less fortunate and threw in the towel.

Redondo Pier venues with outdoor seating thrived, and Boardwalk eateries started serving on the upper pedestrian walkway, a logistical feat that involved staff running up stairs with trays of food and drinks. Those restaurants didn’t get the usual boost from the Lobster Fest, because it was decided that there was no way of doing the festival safely. 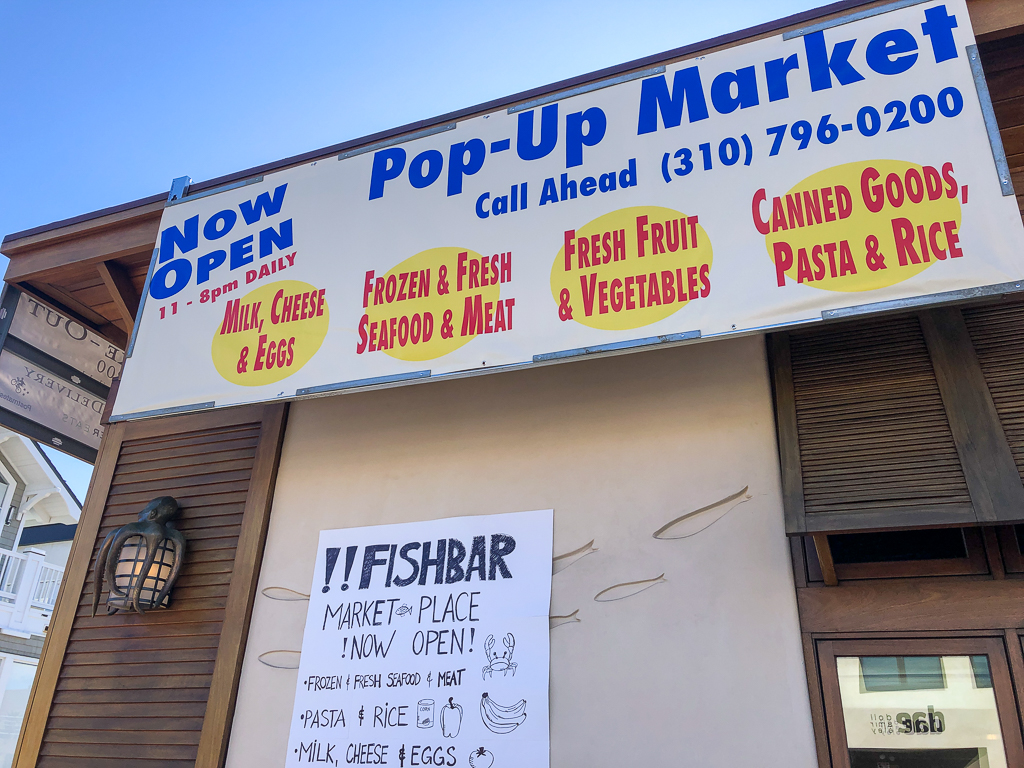 TLike many local restaurants, when FishBar in Manhattan Beach was forced to stop serving because of the pandemic, starting on St. Patrici’s day, it made adjustments to its business model. EasyReader file photo

By the time September rolled around it was obvious that dining decks and sidewalk tables were the only thing keeping some downtown restaurants viable, so their permits were extended indefinitely. It was noticeable that there were wide discrepancies between different cities when it came to defining indoor and outdoor spaces, so some airy patios were closed while other spaces with what looked a lot like indoor seats near a window remained open.

In October the weather cooled, but the dining scene didn’t. Restaurateurs with open spaces kept making money while coping with increasingly strict enforcement of closing time ordinances. Still, restaurateurs saw outdoor dining as their path to profitability, and proved it in the most sincere way. Every company in greater Los Angeles that sold outdoor heaters was out of stock by mid-month, and pop-up tents and other coverings were in short supply.

November started well with the openings of Fruition Organic Market and Deli and high-style Sicilian restaurant Nando Milano, though patrons mourned the announcement that beloved cheap eats landmark La Penita would close by the end of the year.

Then, things went sour just three days before Thanksgiving, when Los Angeles County hit the Covid case threshold that forced the closure of even outdoor dining. Many restaurateurs had just increased staffing for the holidays in the expectation that the current situation was stable.

The last month of the year brought two new openings, Chicago pizza emporium Red & Louie’s and Redondo’s Mi Burrito, and the announcement that Hudson House would reopen under new management. Previous owner Brooke Williamson was heard nationwide on National Public Radio lamenting the plight of restaurant owners and the insufficiency of help from the federal government. Other restaurateurs expressed themselves on a more local level by simply defying the order, most notably at Redondo’s Eat At Joe’s where owner Alex Jordan got national attention for his confrontational attitude and the banner rebranding his restaurant as The French Laundry, where the Governor had recently enjoyed an ill-advised, indoor meal. In Manhattan Beach the city collaborated with restaurateurs by rebranding their dining decks as public parkettes. This strategy was condemned by County officials and may result in legal action in the coming year.

The horror movie that was 2020 isn’t over yet, though the hero who saves the day has been foreshadowed in the form of new antiviral drugs. We won’t know for certain how it ends, but for now we mourn the restaurants we lost last year. In addition to those mentioned, these include 1511, Avenue A, Crepe Lab, El Barrio Tacos, Enrique’s, The Grindz, Locale 90 Hermosa, Outpost 406, Panela’s, Paris Baguette, Pho Show, Polly’s, Side Door, and Slater’s 50/50. We gained a few as well: Fan Sea Sushi, Tacolicious, Ensenada Fish Tacos, Avenue Italy, Beach Cities Café, Peachwave Deli, Riera’s, and Swell Deli among them. More openings are planned in 2021, but the schedule for these, and their potential for success, are in the part of the movie we haven’t seen yet. ER