The grateful ruffian: how the hell Ray Wylie Hubbard keeps getting better 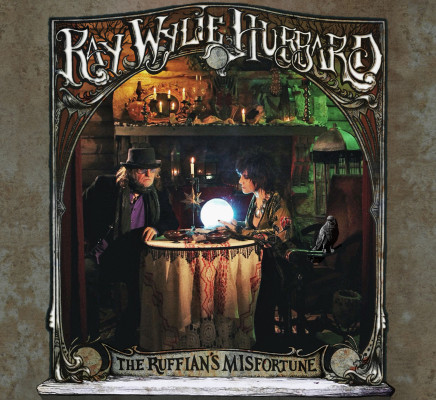 The biography of the songwriter Ray Wylie Hubbard is an unlikely combination of gratitude, grit and outright cussedness.

It’s the story of a naturally brilliant man who wandered through a couple cosmically-inclined debauchery-filled decades, started paying closer attention, midlife, to a few crucial things — particularly that thing called a groove — kept learning, and in his sixth decade of life began producing some of the coolest, wisest, most poetic music around.

Just don’t make the mistake of calling Hubbard a country singer. His name sounds country, granted, and once upon a long time ago he wrote a song called “Up Against the Wall Redneck Mother” that became an outlaw country anthem. And he is indeed originally from Oklahoma and now resides in a little Texas Hill Country town.

All that said, don’t box him in, as a ticket agency recently did in dubbing Hubbard a country act. There’s a saying in journalism, “Don’t piss off a man with a bucket of ink.” Hubbard doesn’t need the ink — he has a deep bucket full of songs that defy any genre and he has a Twitter account and knows how to it: ““i ain’t country..use ‘cool ol low down dead thumb groove badass folkie halfass blues poet with a young rockin band’ instead,” he corrected the ticket agency via social media, where he has made a name for himself within the music industry for his Twitter marksmanship.

“I got to poke them with a stick every so often,” said Hubbard, who will appear at Saint Rocke in Hermosa Beach June 10.

His description of his music happens to be utterly accurate. Hubbard has just released a record called “The Ruffian’s Misfortune” that is the second in a trilogy that began with 2012’s A Grifter’s Hymnal and will conclude sometime in the not-distant future with The Rogue’s Ascension. That the titles have the archaic feel of old picaresque novels — tales popular in the 18th and 19th century which depicted “the adventures of a roguish hero of low social class who lives by his wits in a corrupt society,” according to Wikipedia — isn’t just because they sound good. These, too are accurate descriptions of what Hubbard is up to. He’s a songwriter equally steeped in Edgar Allen Poe and Muddy Waters, and he’s lived through more raucous nights than he’s had a right to survive and knows it.

What it adds up to is a very grateful ruffian, one who acquired a vast store of the tricks of his trade and has used them to make grizzled yet genuinely beautiful art — and in so doing has gotten most of what  asked for out of life.

“It’s a thing, man,” Hubbard said. “I got past 40 — in my 20s and 30s I drank and did a bunch of dope and played honky tonks, then at 41 came out of the fog wanting to write better songs. I got cleaned up, actually learned how to fingerpick, and what’s happening now is I just keep learning new things.”

As a songwriter, Hubbard found liberation in blues grooves. He’s the son of an English teacher and studied literature himself as a young man, and along with some of the recent tools he’s added — bottleneck slide guitar, open D tuning — he has the word hoard of a man who has studied poetry and the life experiences of real-deal midnight rambler. He brings it all to bear to make utterly unique, literate, swampy, groovy music.

“Pretty much I started off in folk music, and I’m not a blue purist, not country, not a rock ‘n’ roll guy, but I’ve been influenced by all that,” Hubbard said. “I feel very fortunate that I saw John Lee Hooker, but I also saw Ernest Tubbs. I can say I’ve been influenced by all of it — country, folk music, roots rock, and of course blues. I feel I can write whatever I want to write. I feel very fortunate to be sleeping with the president of my record label — that’s not Clive Davis, but my wife Judy, let’s make that clear. She says write whatever the hell you want and I’ll try to sell the damned thing.” 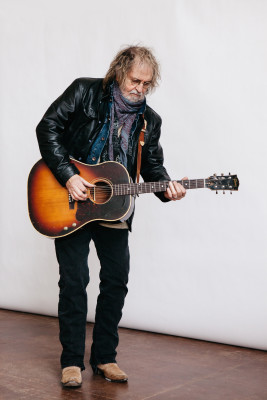 His songs are full of shadowy things, late nights and strippers and car thieves and blues people and black-hearted villains and sometimes the shadow of death itself. His artistic output has increased since the founding of his own record label, Bordello Records, home of the trilogy. And if the trilogy has a thesis statement of a sort, it comes on “Mother Blues” on The Grifter’s Hymnal, which tells the true tale of how he set out as a young man with the goal of having a stripper girlfriend and a gold-plated Les Paul guitar and the dream came true in a way he could not have quite fathomed. It’s mainly set at a nightclub he played in Dallas called Mother Blues, where by dint of having a fiending friend he obtained the Les Paul and by playing Tony Joe White’s funk country classic “Poke Salad Annie” he obtained his stripper girlfriend. But in the end it was the Mother Blues’ door girl, Judy, who much later in life became his wife, and the guitar playing on the song itself is their son, Lucas Hubbard — playing his dad’s gold-plated Les Paul.

The song ends with a litany of the things for which he’s grateful: “I’m grateful that I get to write these old songs and travel around the world and play them for people/And they come out and hear me play/And the days that I keep my gratitude higher than my expectations/Well, I have really good days…”

His son is now part of that young rockin’ band Hubbard travels with.

“I am grateful for the time I share on the stage with him,” Hubbard said. “I look over and think, ‘Hey, that’s my kid, and he’s playing lowdown cool. It’s a kick….He’s a good kid, but it was a lot better before he found out the other guys in the band were getting paid. Then that changed.”

The new record picks up where the last left off and if anything delves ever more deeply into blues territory — a strange and wondrous kind of roadhouse blues, with songs about “badass chick singers,” blueswoman Jesse Mae Hemphill and her “dead thumb groove” and a grateful ruffian’s anticipation of going barefoot in heaven.

And his latest trick? Ray Wylie Hubbard — not a country singer, by the way — sings some legitimate gospel. He’s been contemplating mortality — “I hope God grades on a curve,” he likes to say — and his vision of the afterlife.  Aldous Huxley once wrote that gratitude is heaven. If so, Hubbard is already there. As he sings on “Barefoot in Heaven”, “Ain’t a secret if you know me, I been no account most of my life. But I’ve been converted and now I got the spirit. So there’s a chance I gonna see this paradise….”

Ray Wylie Hubbard plays Saint Rocke June 10. $20. See SaintRocke.com for tickets and times, and RayWylie.com for more information on the artist and his music.