The house that baseball built 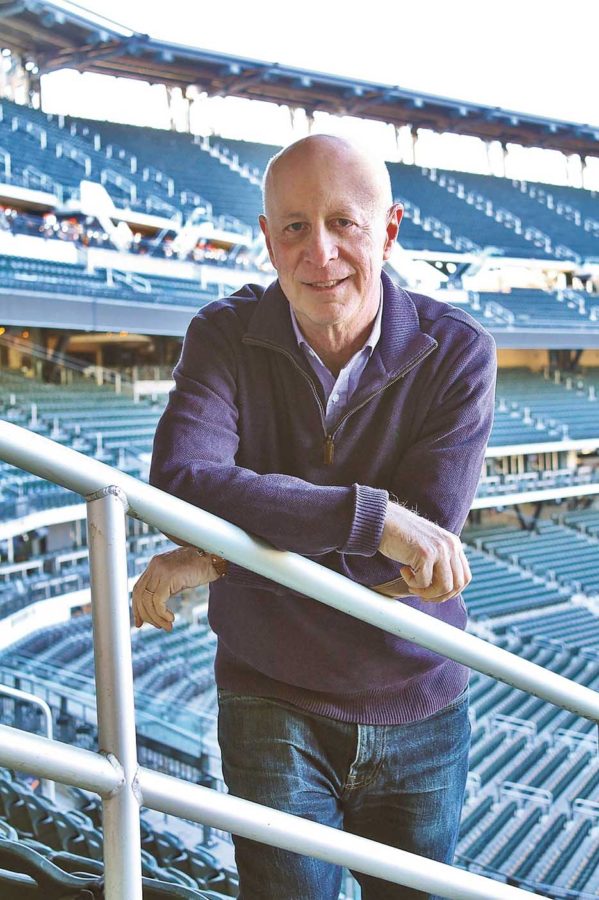 Appearing at Pages this weekend, architecture critic Paul Goldberger sets his sights on the national pastime with ‘Ballpark’

Don DeLillo’s “Underworld” wraps the story of the second half of the 20th century around the seams of one of the world’s most famous baseballs: the “Shot Heard ‘Round the World,” Bobby Thompson’s famous 1951 home run that helped the New York Giants beat the Brooklyn Dodgers, and sent them to the World Series.

The true fate of the ball Thompson hit is unknown, but DeLillo crafts an immersive history that begins with a boy who skips school the day of the game and sneaks into the Polo Grounds, the stadium where the Giants played. In DeLillo’s telling, the boy, Cotter, emerges from a scrum with the ball and walks out of the stadium, knowing he has a piece of history in his hands. He’s pursued by a bigger, older man, Bill, who was also in the scrum, and wants the ball for himself.

Cotter starts heading south along Eighth Avenue, and Bill follows. Bill menaces Cotter and nearly gets the ball back, but one problem emerges: Bill is white, Cotter is black, and they have found themselves in Harlem. Bill gives up, and Cotter’s last glimpse of him is of “a flushed and panting man who has vainly chased along a railroad track for the five-oh-nine.”

Today, the Polo Grounds are no more, the Giants play in San Francisco, and the Dodgers are in Los Angeles. That stretch of Eighth Avenue has been renamed Frederick Douglass Boulevard and, a bit farther south, slums have given way to fancy restaurants.

Baseball changes, and so do the buildings where it’s played and the streets that surround them. That story of change is the subject of “Ballpark: Baseball in the American City,” a delightful new book from Paul Goldberger. Goldberger, who will be appearing at Pages: a Bookstore in Manhattan Beach on Sunday for a reading and discussion, is a contributing editor at Vanity Fair and a longtime architecture critic for publications like The New Yorker and The New York Times.

Goldberger presents a story in which the evolution of baseball and its parks mirrors the evolution of the urban environment and our attitude toward it. Baseball and architecture may seem like an unlikely pairing, Goldberger acknowledged in an interview. But reading the book makes one wonder why it’s never been done before.

It is baseball, for example, that compels fans to take road trips to all 30 Major League ballparks. It would take a maniacally committed hockey partisan, for example, to set out to see every NHL stadium, because the experience of each is almost exactly the same: a pill-shaped slab of ice with a giant four-sided television hanging overhead. But in baseball, every park is different. Fenway Park has the Green Monster left field wall. The Arizona Diamondbacks have a jacuzzi that the Dodgers romped through to celebrate winning the division. The Houston Astros have a train that runs just over the center field wall.

But Goldberger’s study is not a fan’s road trip. There is no numbing hagiography of the ballpark experience. “I’m not suggesting that Fenway Park is the equivalent of ‘Hamlet,’” Goldberger joked. Instead, he looks closely at stadiums past and present, and thinks carefully about what they say about us and our priorities.

This often means looking not just at the ballparks themselves, but about how people get to them. When baseball was first played in parks built for that purpose, people would walk or perhaps take a horse-drawn street car; those were their only options. Stadiums got bigger as public transit like the subway allowed more people to get from one part of a city to another. Not coincidentally, this era at the beginning of the 20th century produced baseball’s most cherished venues, like Fenway, Wrigley Field in Chicago and the old Tiger Stadium in Detroit. But once the automobile came around, everything changed. And nowhere is this truer than in Los Angeles, at Chavez Ravine.

Goldberger said that Dodger Stadium is “simultaneously one of the best and one of the worst” ballparks. Once inside, the sightlines and engaged crowd make for one of the best experiences in baseball. But getting there and parking, he said, is a notorious bummer.

Like other expensive construction, stadiums are supposed to last a while. They endure as the smaller buildings around them change, and remind us how differently we used to see things.

“When Dodger Stadium being planned, the notion that the automobile might choke Los Angeles rather than liberate it was not on anyone’s radar,” Goldberger writes.

From donuts to downtown 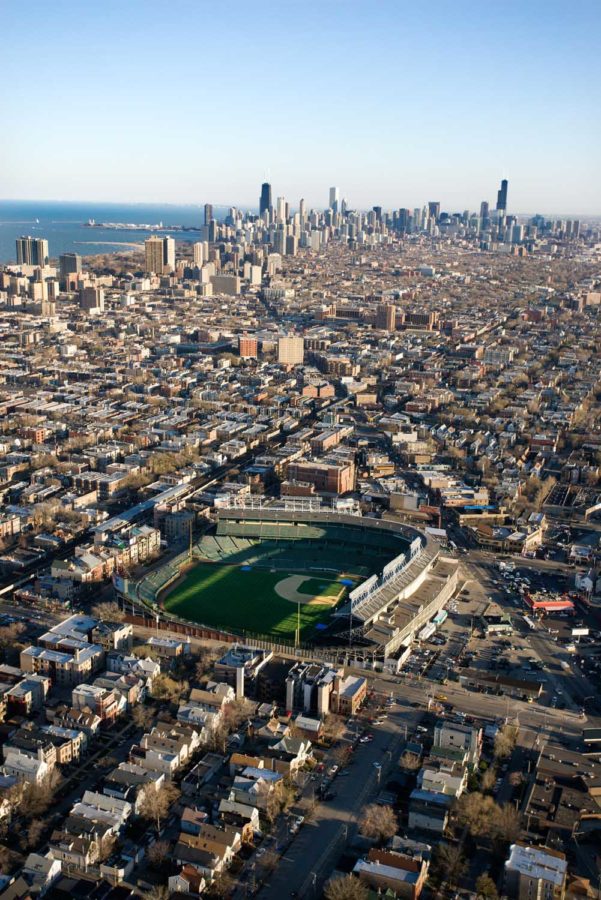 Let’s go back to Thompson’s home run ball. Today, as in 1951, a baseball fan lucky enough to catch a foul ball or a home run is considered the ball’s owner. But this rule did not get solidified until the 1920s; until then, errant balls were thought to be the property of the team of the player that hit them. As Goldberger convincingly argues, this was largely a reaction to changes in the physical space where the game was played. Once owners began building bleachers closer in, and positioning seats along foul lines, players started hitting the ball into places where fans could grab it. Only then did the question emerge of to whom foul balls and home runs belonged.

“Who would have thought that that was ever an issue?” Goldberger said.

Baseball is several decades older than the other three major U.S. sports, and those years were crucial to making the game what it is. Baseball came together before the era of mass media and instant communication, which allowed different versions of the sport, with different rules and styles of play, to emerge in different parts of the country. The New York version of baseball differed from the Massachusetts one; they came together when teams from the different areas worked out rules so they could play one another. As a result, the league followed the game, not the other way around, Goldberger points out.

This legacy of teams that existed as improvised clubs before the hierarchy of professionalized sports continued into the early 20th century, when the denser urban landscape made for a much more fractured fan base. Today, only New York, Los Angeles and Chicago support two baseball teams. Compare this to the 1910s, when, as Goldberger notes, the “Baker Bowl,” home to the Philadelphia Phillies, was just five blocks away from Shibe Park, home to the Philadelphia Athletics.

The clustering of teams gave rise to something much closer to soccer fandom in Europe, in which the existence of multiple teams within one city produces levels of devotion that seem more intense because of how fans construct an identity out of the teams they root for. It seems odd to think of a “working class” or “intellectual” baseball team, but soccer fans in Europe make these distinctions all the time. Not coincidentally, London, which has about as many people as New York City, has 13 professional soccer teams.

Alas, as baseball spread west, it also spread out within the city, and to the suburbs. In what Goldberger terms the “Era of Concrete Donuts,” teams in the post-war era aimed for stadiums that were often shared with football teams and always surrounded by massive parking lots. It led to a smoothed out dulling of the experience of visiting a ballpark, and was dramatically different from the stadiums of old, which had developed around the constraints of densely built up cities. Teams eventually learned their lesson, though, and maligned stadiums like Houston’s Astrodome gave way to today’s trend of parks integrated into the urban core, like Baltimore’s Camden Yards.

If this reminds you of debates surrounding contemporary housing and transportation issues, you’re right. Goldberger said that is to some extent inevitable in writing about architecture, even the architecture of something meant for pleasure.

“There is a degree of social responsibility in architecture criticism that does go beyond other realms. Architecture is partly an art, but it’s also the reality of cities and what surrounds us, and how we relate to it. Like all critics, the architecture critic is hopefully creating a more literate and discerning public,” Goldberger said.

Pages hosts Paul Goldberger Sunday at 4 p.m. To purchase a ticket, go to pagesabookstore.com. Tickets include beer and peanuts, and will get attendees $1 off Dodger Dogs at Ercole’s across the street.