“The Lehman Trilogy” – a sound investment 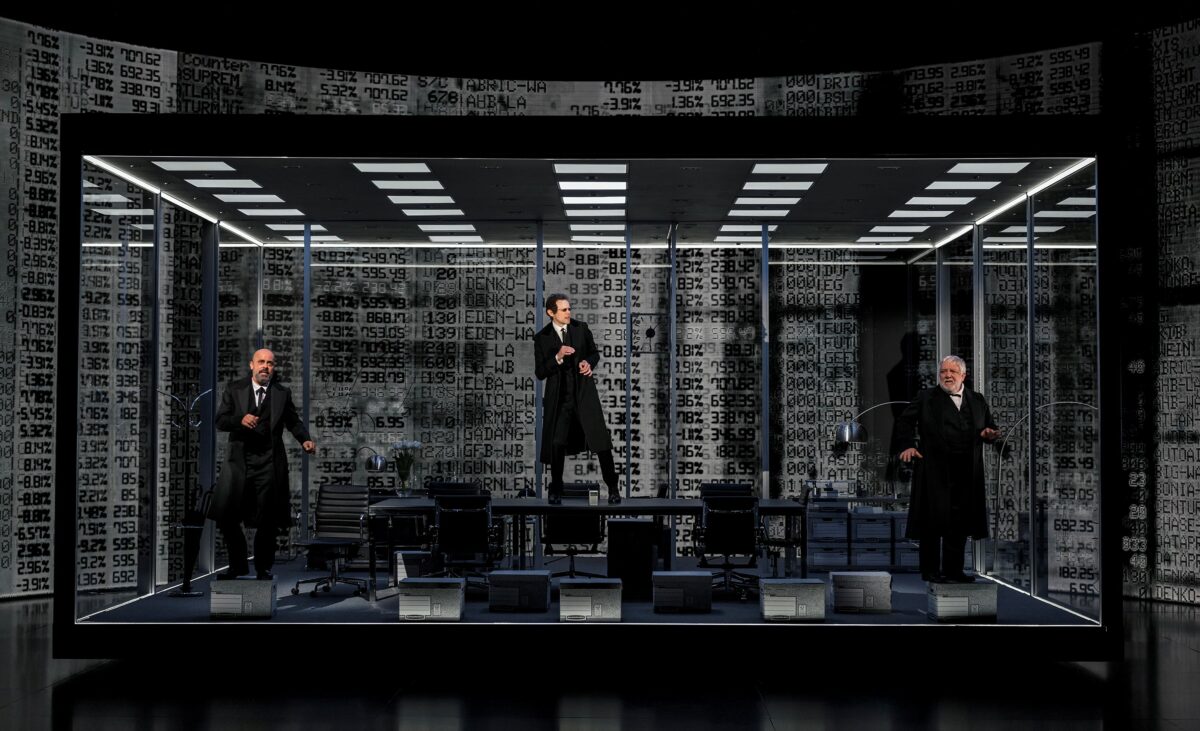 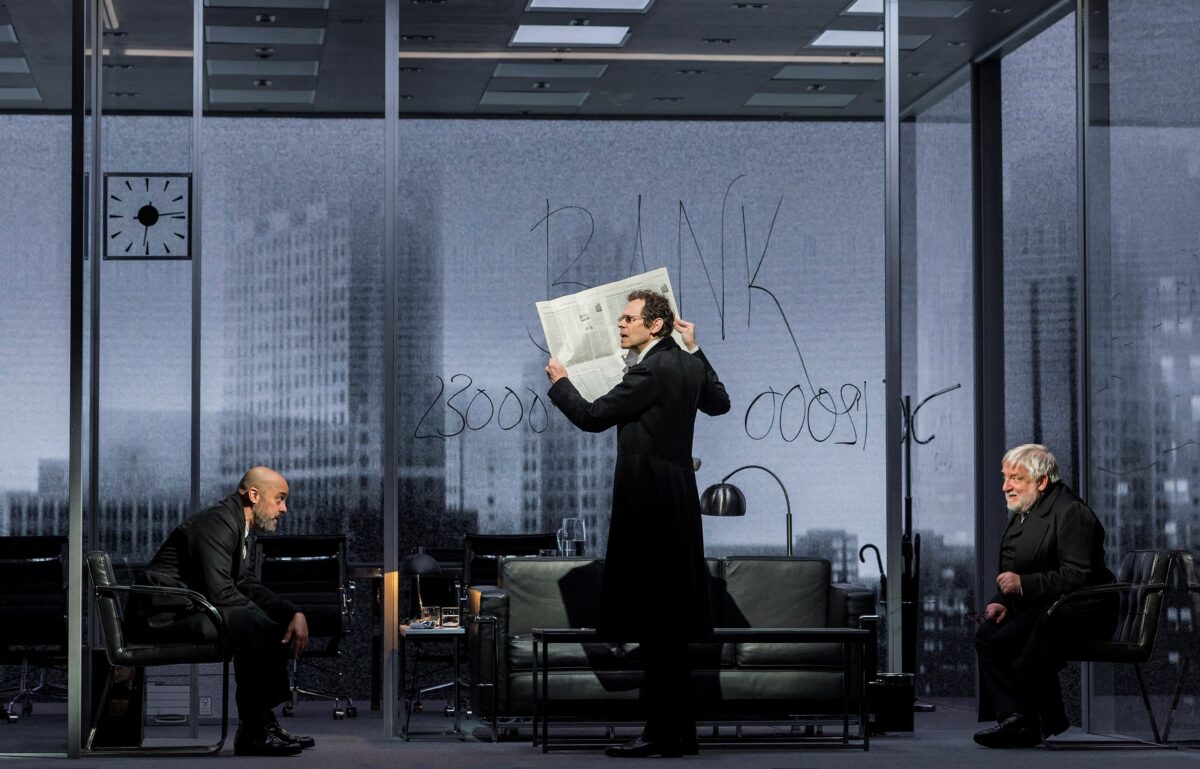 The bigger they come, the harder they fall

“The Lehman Trilogy” at the Ahmanson

It would seem like a hard sell: a three-and-a-half hour play about the fourth largest investment bank in the United States and its demise, in 2008, as the largest bankruptcy in U.S. history. But never mind all that. “The Lehman Trilogy,” directed by Sam Mendes, is a masterpiece, an engaging theatrical experience from start to finish.

Beginning in 1844, when Henry Lehman (Simon Russell Beale) arrived in America from Rimpar, Bavaria, and opened his drygoods business in Montgomery, Alabama, soon joined by his brother Emanuel (Howard W. Overshown) and then brother Mayer (Adam Godley), “The Lehman Trilogy” depicts the rise and fall of an American—or immigrant’s—dream, and one that only comes to an end 164 years later. The play can also be viewed as an entrepreneurial, Jewish saga in the States and perhaps—for those seeking wider historical analogies—the Medicis in Florence: Cosimo, son Lorenzo (the Magnificent), and grandson Piero.

Likewise there are three generations here, three chronological blocks of time, each one piggybacking on the accomplishments or even setbacks of the former. While the play apparently stays true to time and place, this is after all a historical dramatization with sharp edges often smoothed over. For example, we do not see the original founders as being underhanded in their dealings with others, no evident hardball tactics in other words, although it would be rare indeed for fortunes to be made without squeezing out a few others on the way up. The fledgling company built much of its earliest success by striking advantageous deals with plantation owners, the latter dependent on their slaves. Growth, not charity, was the immediate goal. And while there were bumps along the way—devastating fires, the Civil War, stock market crashes—the resiliency of the Lehmans circumvented these potential fatal disasters. 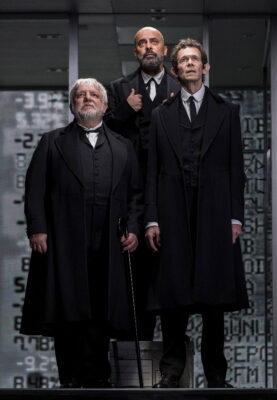 “The Lehman Brothers” was written by the Italian playwright Stefano Massini, and it was originally five hours in length. Ben Power adapted it into English and presumably did the paring as well. Unlike the typical play, where the characters interact only with one another, this one’s almost like storytelling mixed with a lesson in recent history, in which Beale, Godley, and Overshown mostly narrate to the audience what is taking place. When we first encounter them, the brothers appear dressed in what seem to be period clothing; and although there are two intermissions, where years may have passed while we’ve chatted in the lobby, there are no wardrobe changes, even with the three actors also taking on the roles of numerous children, wives, lovers, and others. One who hasn’t seen the play may well wonder: How can this trio of middle-aged men assume such diverse roles and not appear a little absurd in the process, and that of course is the question I’ve been waiting for, and waiting to answer.

Beale, Godley, and Overshown are extraordinary actors, the first two in particular, and it should be noted that both Beale and Godley were in the Broadway as well as the West End, London, cast of this show. I can think of a few actors, like Ian McKellan or Mark Rylance or, more locally, Dakin Matthews, who are complete masters of their craft, actors who could stand on the stage and read from the telephone book and you’d still be mesmerized. Without doubt, they constitute the main reason for attending a performance of “The Lehman Trilogy.”

But the show really is more than the sum of its parts in other ways, from the stage direction by Sam Mendes (“American Beauty,” “The Road to Perdition,” “1917,” etc.) to the scenic design by Es Devlin. The set is basically the rooms of an office within a glass rectangle that sits on a turntable. The props are minimal, desks and chairs and paper or filing boxes, the latter easily converted into stools, steps, and stepladders, as needed. In one sense, as the stage revolves, so does the world, so do the years, and much later, although metaphorically, it all spins out of control. Also, more than in most plays, and in an unobtrusive cinematic sense, is the score by Nick Powell, performed live on piano by either Rebekah Bruce or Em Goldman. The music underlines key moments and often duets with the video projection by Luke Halls, the visuals ranging moodily in black and white from an empty ocean to plantation fields and to the busy metropolis of New York City.

As noted, the Lehman story spans three generations, the second focused on Philip Lehman (Emanuel’s son) and Herbert Lehman (Mayer’s son), played by Beale and Overshown respectively. Philip’s tenure with the company was from 1887 to 1947, and he may have been the strongest link in this chain, extremely bright but a little smug (in Beale’s portrayal). His son, Robert “Bobbie” Lehman, was at the helm from 1925 to 1969. Godley, in the role of Bobbie, is frankly sensational.

And then there are no more Lehmans in Lehman Brothers and less than 40 years later there’s a fatal wrong turn or two and this edifice of American capitalism implodes. What began as a business with tangible items became an intangible numbers game. There’s a whirlwind of numerical figures on the backdrop, too fast and furious to be comprehended. The last part of the play may be a little hard to follow, and I think that’s because there’s little theatrical appeal, and the lack of a character to be involved with, after Bobbie’s death. But that’s fine; a proper and pat ending isn’t required, even though this one ends with a “crash.” This is, rather, a portrait of a journey, and one of the most rewarding theatrical journeys I’ve ever been on.