The middle of everything [restaurant review] 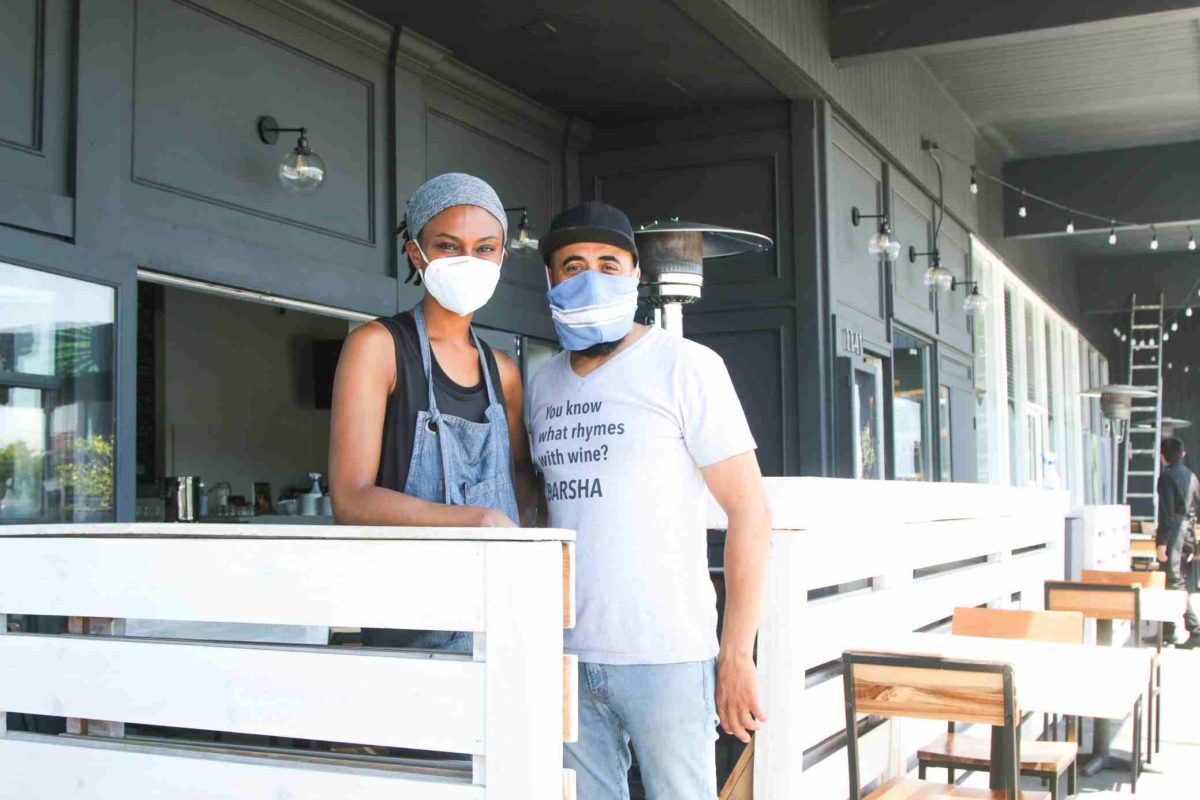 Lenora and Adnen Marouani have added an expansive outdoor patio since the ban on indoor dining. Photo by Kevin Cody

The ancient Romans called the waters around the Italian peninsula “the ocean at the center of the world” – that’s one literal translation of the word Mediterranean. In an era when travel was fastest by water, control of the center of that sea was a natural advantage for their empire. In times of war, troops moved quickly, and when the empire was at peace, spices and other trade goods flowed and made merchants rich.

Most Americans know at least a little about that history and how trade routes to east and west and the New World shaped Italian cuisine. They’re less likely to know how the same commerce influenced Tunisia, the northernmost point in Africa that is less than 200 miles from Sicily. Millennia of trade and conquest formed a distinctive culture and cuisine there, but it is little known because few Tunisians emigrated to the United States.

As far as I can discern, the entire Tunisian emigre community in the South Bay consists of one person, a charming fellow named Adnen Marouani who opened a restaurant called Barsha with his wife Lenora. (They already owned a wine shop in Manhattan Beach by the same name.) The restaurant has gamely faced the travails shared by all eateries this year and is currently serving at outdoor tables shaded by a roof overhang. The distance from the street that can sometimes make them hard to find is an advantage at the moment, since the traffic noise is a bit further away than at some other alfresco spaces.

Tunisian cuisine has influences from Morocco, France, and Italy. At Barsha these are fused with a Californian affection for farmer’s market produce. This fits well with a cuisine that is surprisingly rich in vegetable dishes for Americans who think that all of North Africa is desert. (It isn’t. Much of Tunisia has a climate that is – here’s that word again – Mediterranean). At Barsha modern and ancient traditions come together in a tabbouleh made with quinoa instead of the traditional bulghur wheat, which is a nifty idea. The more defined texture and slightly nutty flavor add a dimension to the mix of greens with lemon and olive oil, and the coriander-pickled radishes add some bright, sharp flavor. Another item for vegetable lovers is their roasted cauliflower with cilantro, calabrese pepper, almonds, and dill. Peppers and dill aren’t often used together because the delicate green herb is easily overwhelmed, but when the balance is right it’s remarkable. 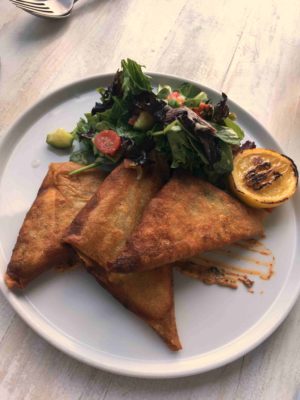 Tuna conserva is available as a bruschetta or as a fried turnover called a brik at brunch. It’s tuna salad for grown-ups. Photo by Richard Foss

For a starter that shows European influences in this cuisine, order something involving the tuna conserva, in which the fish is poached in olive oil and seasonings and served cold. This is available as a bruschetta at dinner or as a fried turnover called a brik at brunch and is luscious in either. It’s tuna salad for grown-ups, the slight pickled flavor of capers mingling with chopped scallion and a bit of harissa, the Tunisian pepper sauce that is milder and more nuanced than Sriracha. Barsha also offers house-made pate, farmer’s cheeses, and charcuterie, cultural relics from nearly a century of French occupation that only ended in 1959. That influence is also evident in the La Goulette mussels, which are named after a section of the port in the capital of Tunis. They’re steamed in beer with tomato and capers, which is like some French recipes, but you also taste preserved lemon and other spices that are uniquely North African.

Tunisian cuisine is big on proteins served over or in stews with complex broths that resemble a mild, fragrant curry. Standouts here include chicken mosli in a sauce with smoky charred tomato, and the superb lamb and beef meatballs over couscous in a mild but rich sauce. Though many items here have a dash of harissa chile sauce in there somewhere, few would qualify as hot on the spectrum of Mexican and Indian food. 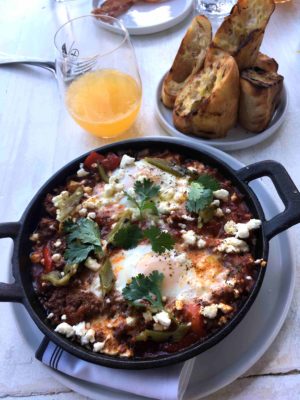 Shakshuka is the perfect brunch item for those who enjoy spicy, flavorful food. Photo by Richard Foss

The mosli has more than a hint of heat, but if you want something with a kick stop by at brunch when they’re serving shakshuka, eggs poached with merguez sausage in a sauce heavy with cumin, paprika, nutmeg, garlic, and peppers, peppers, peppers. It’s served with toasted baguette, and you’ll want every crumb of bread to capture every drop of sauce.

For those who prefer their food a bit milder but still with some zip to it, the branzino filet over risotto-style couscous will hit the spot. The fish is seasoned with a spice mix called tabil based on coriander, caraway, garlic, and chili, which could be potent in large amounts but is used moderately on the fish as a rub. Any excessive heat is quenched by a bite of creamy vegetable risotto which has a native American twist thanks to the addition of succotash. Another mild item is the lamb cheeks submerged in a thick risotto, a combination that is almost too rich. Lamb cheeks have an unusual texture when slow-cooked because the collagen melts to gelatin, which is the same thing that happens in good pot roast. I will ask for an extra portion of the crispy shallots next time, because both the flavor and texture were a nice contrast.

To drink, there is an impressive list of wines and some fine beers on draft, but I strongly suggest one of the wine-based cocktails. It is rare that I recommend one of these, because usually the wine is an inferior substitute for spirits in a place without a liquor license, but these are exceptional blends of sparkling or still wines with vermouth, cider, juices, and various botanicals bottled and fresh. If you drink cocktails for flavor rather than the kick, give these a try.

Tunisia has a variety of traditional desserts, most of which are heavily sweet variations on fried dough. Barsha uses Tunisian flavors in more subtle items, like a rose-scented lemon mascarpone trifle over pound cake. I almost never like things with a rose flavor because they are usually overwhelmingly floral, but I was won over by this one. The fig brownie with almonds and ice cream hit the spot too, and someday I intend to try the caramelized apple glazed with red wine but so far, I keep ordering the trifle.

Some people who visit Barsha do so out of a search for novel dining experiences, which have been particularly lacking in a time when most of us aren’t driving to different neighborhoods around Los Angeles. They come back because there are interesting ideas solidly executed. Though the ambiance is now that of a shopping center parking lot rather than their lovely interior with its North African art, the food takes you to a faraway land.