The old man and the little mermaid 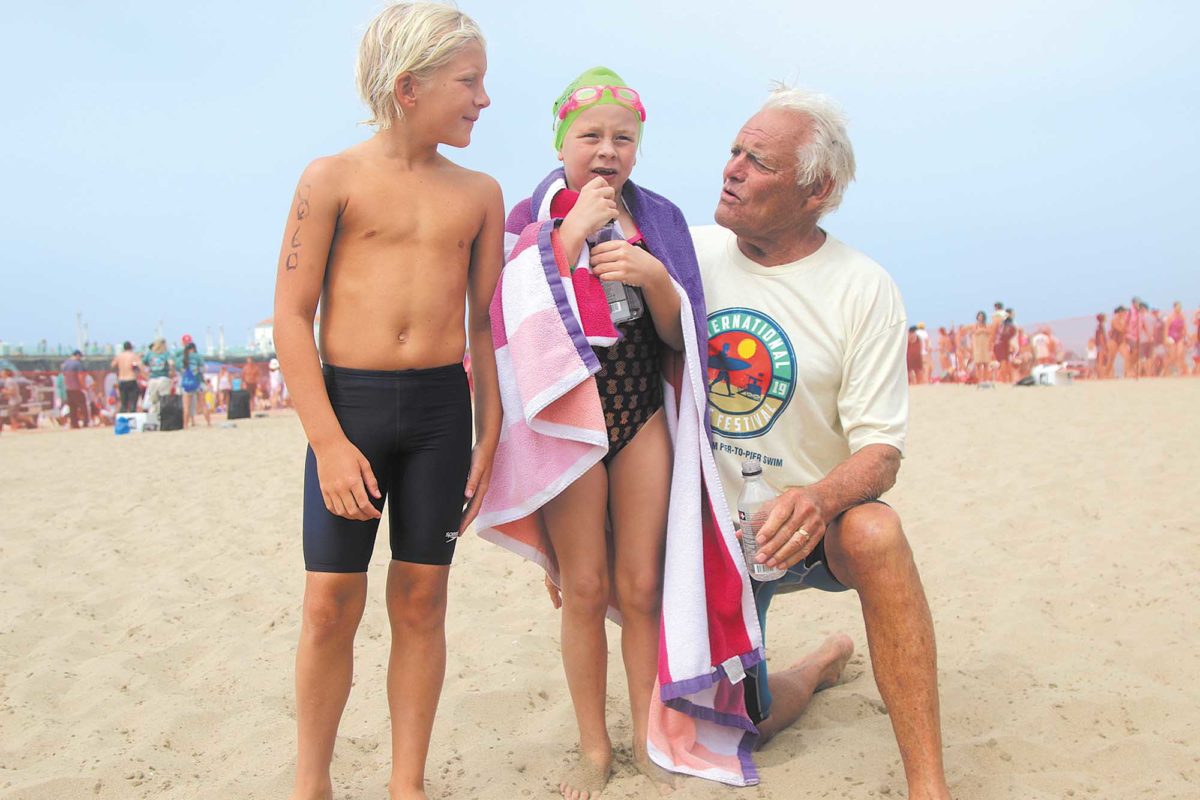 “You’re on your own, just you and the ocean.” – Dwight Crum Pier to Pier announcer Dick Douglas

She’s the youngest person ever to swim in the two-mile Dwight Crum Pier to Pier race. He was the oldest person in Sunday’s race. In an after-race photo, he looked like a proud grandfather and she a proud granddaughter. Adelei Mosteller, 7, of Manhattan Beach, and Fred Tisue, 80, of Eden, Utah, did not know each other before Sunday. But both love the ocean and both have an inner desire to excel.

Tisue is a former Los Angeles County Lifeguard and was a member of the U.S. water polo team at the 1960 Olympic games, where he scored a games’ high 12 goals.

Though Mosteller and  Tisue are separated by 73 years, they gave very similar answers when asked what they were thinking mid-way through Sunday’s race, when the Hermosa Beach Pier was fading away behind them and the Manhattan Beach Pier loomed far off in the distance in front of them.

“I felt like I was standing still,” Mosteller said. “Like I wasn’t moving at all… So I just kept swimming.”

She had only one real complaint after finishing in one hour, 28 minutes and 33 seconds: “I swallowed a lot of water,” she said.  She crossed the finish line in 989th place, out of 1,216 finishers and shaved six minutes off her time from last year, when she became the youngest ever to complete the Pier to Pier.

Tisue’s response to the same question reflected his greater experience and a better understanding of the mental challenges in long-distance swimming.

“I tried to keep my head in the water and not look up at the Manhattan pier,” he said. “Because when I did sneak a peek it looked so far away.”

He admitted that mid-way through the journey his mind drifted to a question that was unavoidable for a guy his age: Why was he still doing this after so many pier-to-pier races. He has competed in the race every year since it began in 1963.

“The answer was that it’s a ritual for me, a ritual that I really enjoy – once it’s over and I’m back on land,” he said. “That’s when I’m glad I did it again.”

Half an hour after finishing in one hour, eight minutes and 53 seconds, placing him 745 overall — his personal best was 47 minutes many, many years ago – Tisue flashed a grin that lit up his weathered face like a neon sign that said “Glad to be Alive and Still Swimming.” 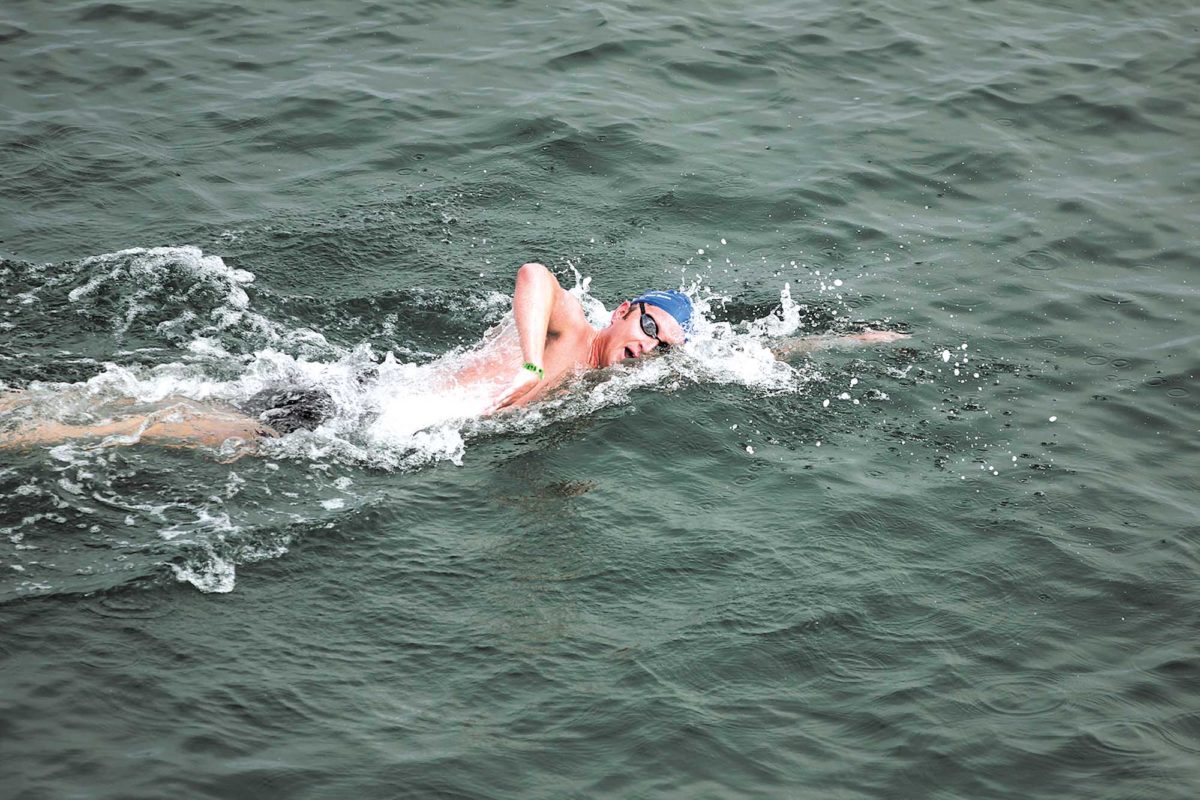 Race announcer Dick Douglas, who has wielded the microphone for every Pier to Pier race since 1981, started whipping up the gathering crowd north of the Manhattan Beach Pier shortly after 9:30 a.m. Sunday, a half-hour after race director Gary Crum fired the starting gun just south of the Hermosa Pier. The race was named after Crum’s dad Dwight, a former lifeguard chief, upon his passing in 2000, at age 77. Gary was also a lifeguard chief.

“They’re about 3 minutes away from the Pier,” Douglas announced while standing in the back of  a Lifeguard truck, as the first bobbing blue swim cap came into view. Unlike most years, when the leaders draft off one another until they reach the surfline and the winner is decided by who is fastest sprinting up the beach to the finish line, Sunday’s lead swimmer was already sprinting up the beach when the second-place swimmer, who was also alone, rounded the pier.

“What a dominant win in just 35 minutes, 42 seconds” Douglas barked into the microphone.

It was a dominant win for Ryan Bullock, a 35-year-old Hermosa Beach audiologist. And not only because of his time. Sunday’s win marked his fourth in a row and his fifth in the last six Pier to Pier races.

As impressive as that run has been, Bullock knew he has a long way to go to match the accomplishments of Alex Kostich, 49, who finished second, a minute back, in 36:59.

Kostich has won 11 Pier to Pier races over the past 21 years.

“Alex would still be adding to that total if it weren’t for Ryan,” Crum said.

Bullock said his strategy was simple: “I try to get a good clean start and usually draft someone ‘till I’m past the Hermosa pier, then I find a moment to break away,” he said. Drafting is the common practice of following closely behind another competitor, and being pulled along by the vacuum created by the leader.

Like Mosteller and Tisue, Bullock said even elite swimmers have to combat the haunting feeling that they are not making progress.

“I try not to look up at the Manhattan pier, because it stays the same size all the time,” he said.

The Arkansas native was awarded a swimming scholarship to Missouri State, swam competitively through graduate school, and then moved to Hermosa Beach. He became a recurrent Los Angeles County lifeguard in 2015.

He was especially pleased with his time this year. “That’s the fastest I’ve ever done it,” he said. His time last year was 39:13.

“It’s my fourth pier to pier race,” she said as she gathered her breath moments after the race. “I was just hoping to finish it, so this feels really good.”

Douglas said he never tires of watching the swimmers sprint up from the water and lunge across the finish line.

“Just to see the sense of accomplishment on their faces, knowing that they met their goal, makes me feel good,” he said.

“You don’t just wake up one day and do this race,” he said during his announcing. “It takes years of training.”

At another point, he described the differences between ocean racing and pool racing.

“There’s no stopping, no hanging on the walls, no standing on the bottom, no black line to follow,” he said. “You’re on your own – just you and the ocean.”