The picture’s title? Spin the wheel, open the fortune cookie, and then they will find out! 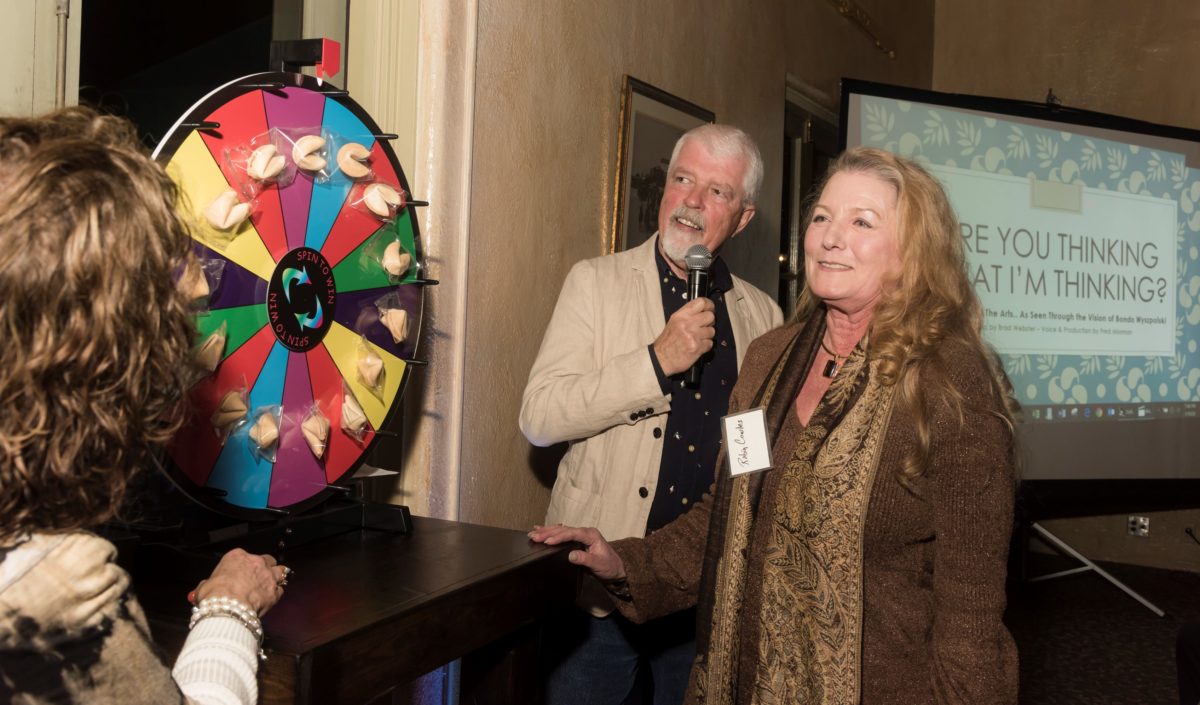 The wheel stops, but now the heart beats faster: Emcee Bernard Fallon and artist Robin Cowles. All photos in this story are by Tony LaBruno

Spinning, spinning; and where it stops, nobody knows! 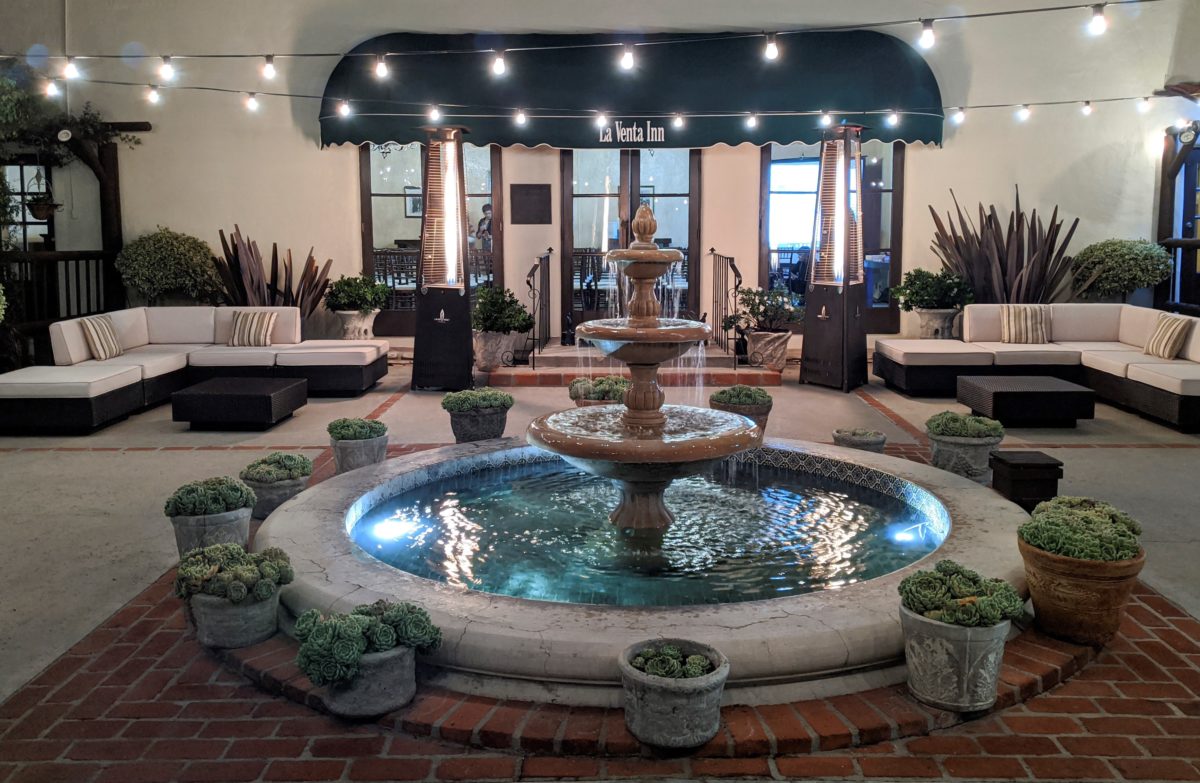 One evening in early January, 34 artists, or in some cases their go-betweens, gathered at La Venta Inn, high upon the hill in Palos Verdes Estates. After wine and hors d’oeuvres, they sat down together before getting up one by one to spin the Wheel of Fortune Cookies at the front of the room. When the wheel stopped, and let me emphasize that the anticipation could have been cut with a butter knife, a fortune cookie was removed from the wheel and handed to the artist, who opened it, removed the slip of paper, and read aloud the words of wisdom it contained. 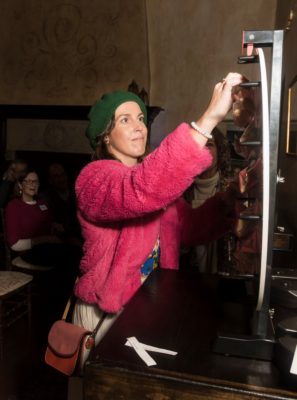 However, instead of the standard good omen, e.g., “Travel plans are afoot” or “Old friends will soon visit,” what each artist discovered was a title. Not “title” as in the deed to a new home or title as in Marquis or Marquise, but rather the title of their future artwork. Which is to say that when Steve Mirich saw the words “From Swan Lake to Swanee River,” and when Drica Lobo found “Martians to the Left, Humans to the Right,” it was understood that their next paintings would probably differ significantly from what they usually create.

And that was entirely the point of “Are You Thinking What I’m Thinking? (subtitled “A Galvanizing Art Challenge”), an art show in the making that will be unveiled on March 15 over brunch at La Venta Inn, where it will stay briefly before traipsing down the hill to the Malaga Cove Library, remaining on view there from March 18 to March 30, with another big shindig on March 28. I hope you’re writing all this down.

Naturally, it would have been much easier if artists simply drew titles from a hat, but, let’s face it, even the non-believers among us always study, however briefly, the predictive contents of a fortune cookie. And then, to add Chance to presumed Fate or Destiny, there’s The Wheel (said to the ominous strains of “Carmina Burana”). And so it’s kind of like, “It can’t be a complete coincidence that I’ve gotten the title I did and not some other.” 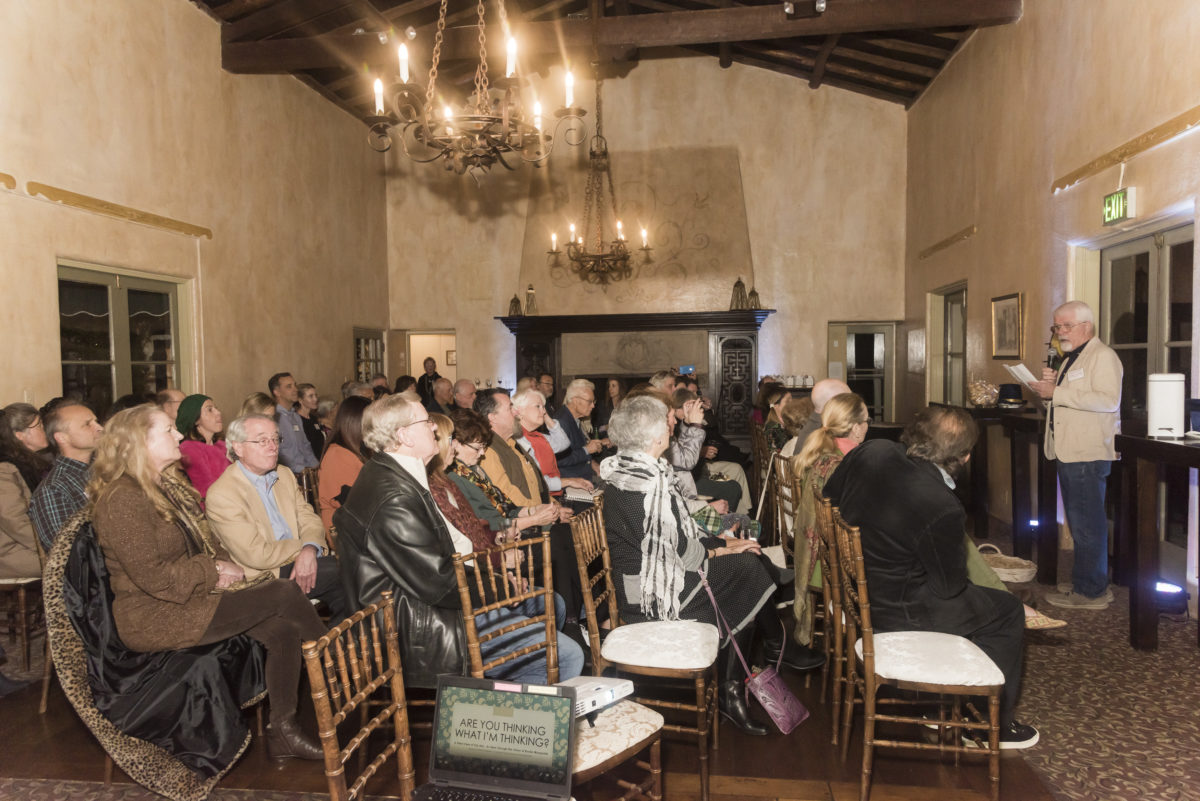 A somber hush has befallen the assembled artists as Bernard Fallon reads them their rights, or last rites, before they begin to spin… the Wheel of Fortune Cookies!

At the event, or “reveal,” which included opening remarks by Bernard Fallon (himself ending up with the title, “Waking Up in My Halloween Costume”) and a slide show purporting to be a documentary about yours truly, artists were free to leave after they’d received their title. But no one left. Possibly they wanted to see what their fellow artists received or, what’s more likely, what they themselves missed out on. 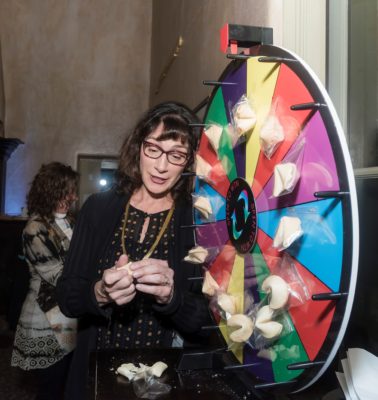 Here’s what some of them said afterwards:

“Thank you so much for this fabulous challenge. It’s a tough stretch for me to get ‘out of the box,’ but I sincerely welcome this experience to help me do so. The opportunity to meet artists I hadn’t met before and to spend time with those I already knew is memorable. I’m very excited to see the results!”–Joyce Welsh.

“I so enjoyed the reveal. The concept is intriguing, and I can’t stop thinking about my ‘challenge.”–Janice Schultz.

“This art adventure has caused my head to reel with thoughts outside the self-imposed limits I constantly push against.”–Errol Gordon.

“The enthusiasm of everyone in the room was amazing!!”–Jody Wiggins.

“What a fun and clever way to unite artists in challenging them to create from a different perspective.”–Bronwyn Towle.

“What a great way to engage the arts community and feed our creative brains.”–Drica Lobo.
“I have never taken on such a challenge, and I expect it to be fun, unique, and also perplexing!”–Lynn Attig.

“I look forward to seeing how each artist interprets their ‘Spin the Wheel’ challenge!”–Debbie Abshear.

So, let’s backtrack a few months and see how this whole endeavor came about. 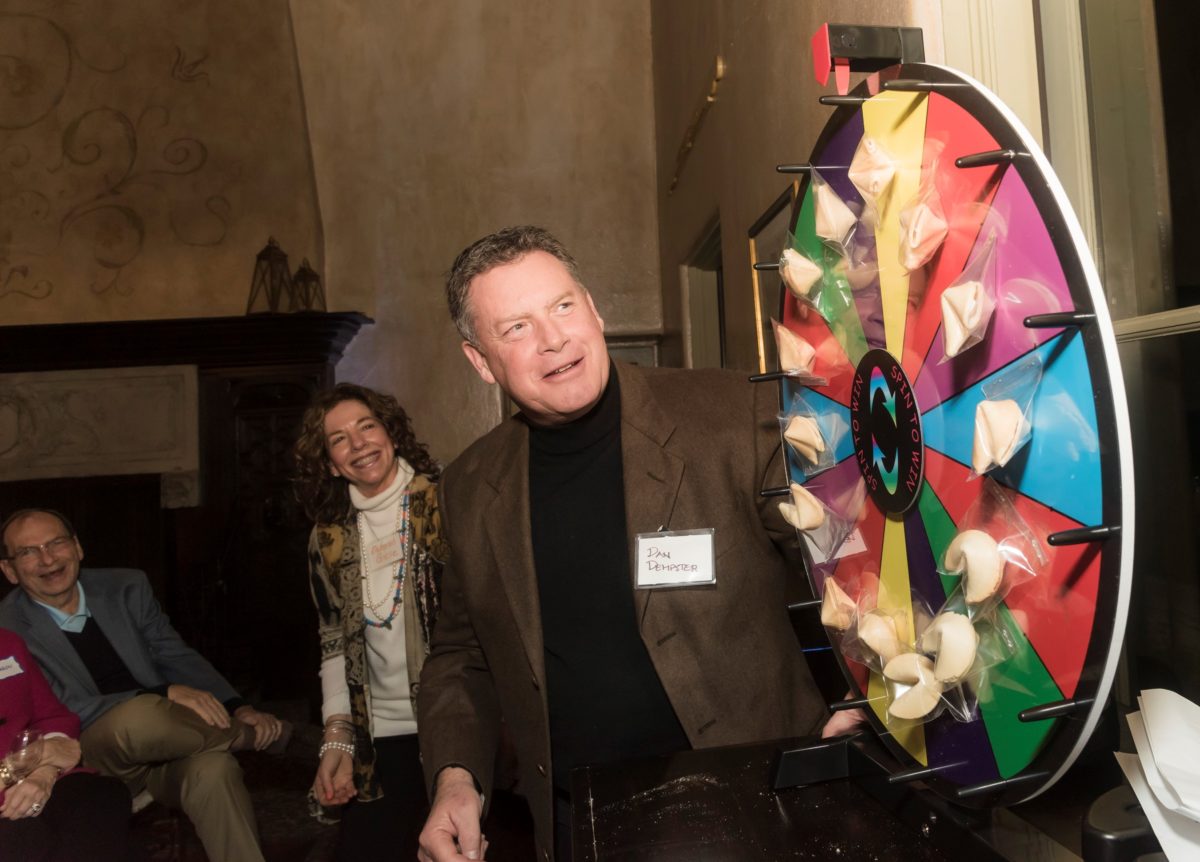 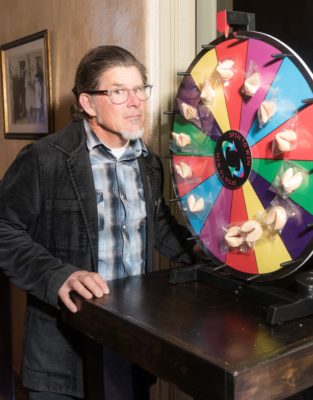 Why not do it this way instead?

Last summer, I stopped in at an art show on the Peninsula and, for the most part, saw familiar motifs. Sunsets over the pier, tidepools with cliffs in the distance, landscapes that could have been (and perhaps were) copied from photographs, favorite cats and dogs and a garden of flowers. That sort of thing. Not exclusively, of course, but enough of it to taint the overall impression. Also, and it hardly needs to be said, these works weren’t about to cause Vermeer or Van Gogh to lose any sleep.

And so, not realizing that I was in essence throwing down the gauntlet, I mentioned to Debbie Giese of The Artists’ Studio of Palos Verdes that it could make for an interesting show if the artists were given an unusual title and asked to crack it open (figuratively) for ideas. Which of course was later manifested (literally) when they cracked open their fortune cookie. In other words, instead of venturing out, seeing bicyclists on The Strand or strollers on Fisherman’s Wharf and then setting up an easel to paint them, the artists would first need to visualize their subject and to conceptually massage it with their imagination.

Behind this was the goading, the nudging, to create a work unlike anything they’d ever attempted.
Or, as Bernard Fallon put it during his opening remarks:

“Hit ‘pause’ on what you are known for. Many of us experiment in the studio and express things that we don’t reveal to others. Of course gallery owners don’t want you to change your style because they are pushing your brand. This is an opportunity to show your work from the back office filing cabinet.

“Bondo envisions you walking into the Malaga Cove Library Gallery and not necessarily recognizing the work by the usual suspects.” Ah, that’s true: I’d want people to say, “I didn’t know that Susan Whiting painted battleships” or “When did Tom Redfield start painting dinosaurs?”

“But don’t worry,” Fallon continued, “we are not going to moralize or judge. The idea is to do something completely different with the title you’ll get in a few minutes.” Then, looking with great concern at his wristwatch: “It’s a starting pistol at a Race Against Time! You have 65 days to turn in your framed artwork…” 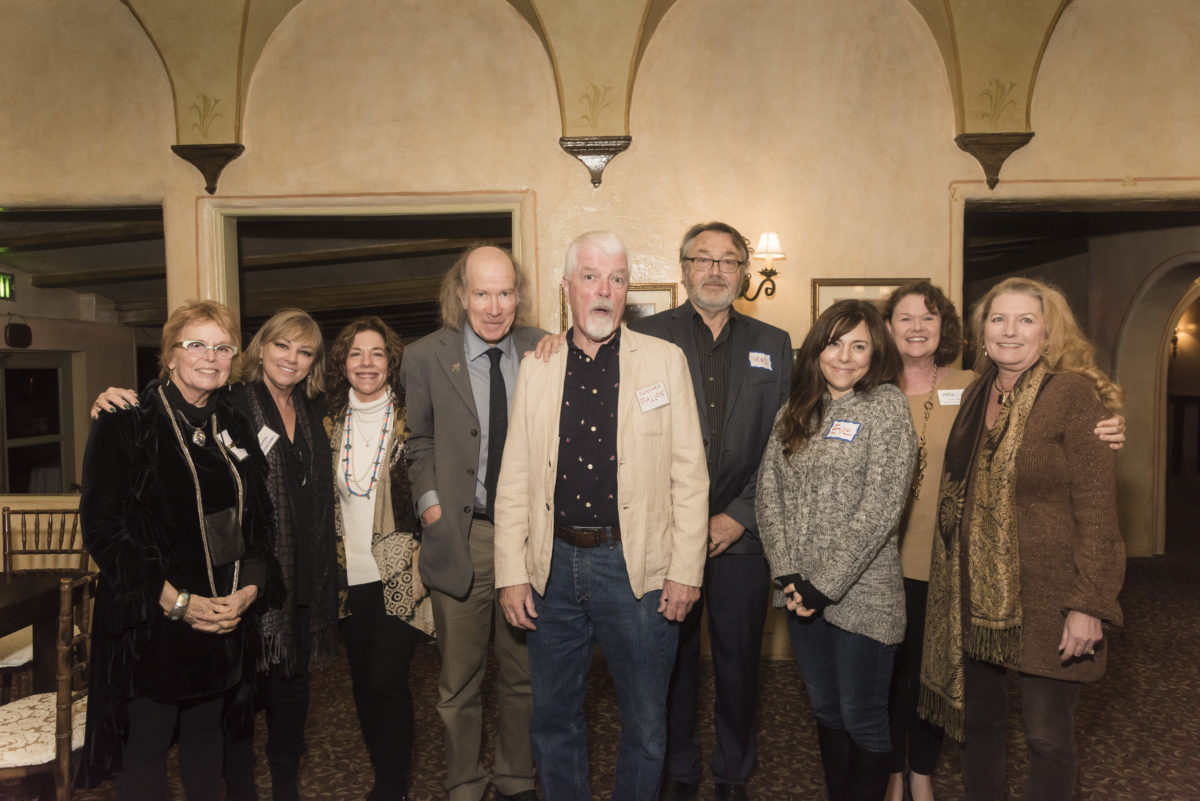 During the course of my conversation with Debbie Giese I mentioned I’d been jotting down titles (some of them chapter headings for never-to-be-realized novels) for some 40 years. They were all spontaneous; I didn’t fish for them. This meant that a few, here and there, weren’t suitable for young audiences, but on the other hand they were working notes and were never intended to be shared. But I shared them with Debbie and also Jody Wiggins. Now the cat’s out of the elevator, as they say. 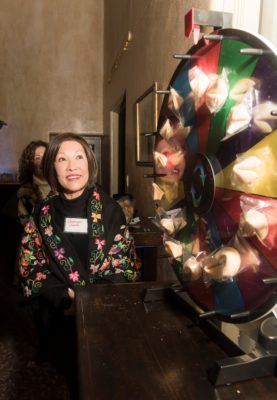 From there it blossomed quickly, but not because of me. I washed my hands of the show even before there was water in the basin to wash with. But Debbie began having powwows with computer-savvy artist Robin Cowles and artist Karen Wharton, the latter also co-owner of the New York Food Company, which manages La Venta Inn. And then, before I could pack up and leave town for a few months, we were all sitting down with Colleen Cotter, the Executive Director of the Peninsula Friends of the Library, and Eve Wittenmyer, the Branch Manager of the Peninsula Library District.

One afternoon, while we were munching on tacos, I suggested to my pal Brad Webster that he sit in on one of these event-planning meetings. Expecting an excuse (“I’m off to the woods to catch a wild boar for dinner with my bare hands”), I was surprised by his willingness to participate, even though he’d assisted me with “L’aura borealis: 100 Ways to Look at the Muse,” which was a featured exhibition of the Palos Verdes Verdes Art Center in 2012. In turn, Brad turned to Fred Missman, a mutual friend and professional DJ, who then narrated and produced the slide show documentary about my life, as mentioned above.

In other words, boxed in, my year-long sabbatical on Easter Island was put on hold. 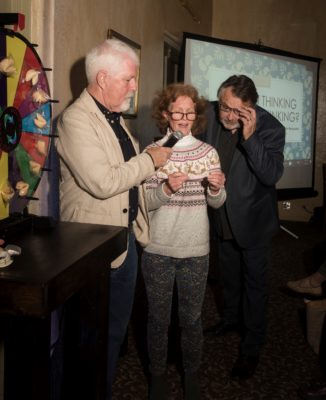 Courageous, but not overly cerebral

One thing about the forthcoming “Are You Thinking What I’m Thinking?” exhibition that should appeal to many of us is the range of artists who agreed to partake in the “challenge.” A number of them have never shown together, largely because their skill levels and interests vary widely. A few of the artists were invited not because we suspect they’ll be the Next Big Thing, but because it was felt that this would be an ideal opportunity for them to step out of their creative comfort zone. For some, adhering to one topic or theme is a deliberate choice, and they can return to it later. But for others, meaning those who are hesitant to dive into deeper waters, let me hand the microphone to Gustave Flaubert, who said that “in the arts timidity is the worst possible thing and the greatest sign of weakness.” He also added, and it’s right here in an email the French novelist sent me last week, If you always play by the rules you will only become competent at best.

As for the titles, we abstained from anything divisive, which means that we skirted the political and religious. But, that said, every artist is at liberty to create a provocative piece. Some people believe we should hold artists to a higher standard, but I would think that holding them to a lower standard is more interesting. If someone wants to paint Harvey Weinstein with a halo or Greta Thunberg seized by Somali pirates, that’s fine by me. 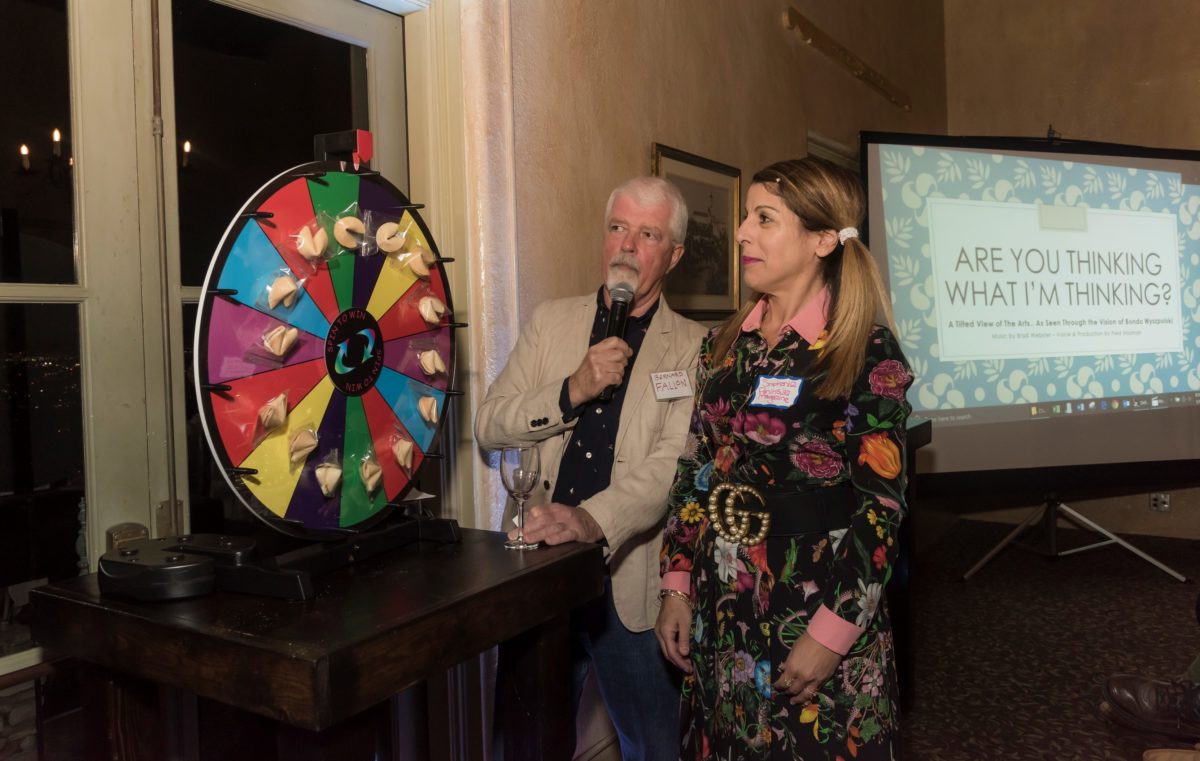 Let me quote another writer, Argentina’s Ernesto Sabato: “That a woman be fashionable is only natural; that an artist be fashionable is an abomination.” There are trendy topics galore currently making the rounds, promulgated by graduate-level art classes and their pontificating instructors. But let’s stand back from too much art that stridently explores transgender or non-binary rights, body shaming, migration, white fragility and black or brown pride. Relevant topics, to be sure, but not when couched in some abstract, socio-political theory that’s at the expense of the soul and beauty of the artwork itself, and by beauty I don’t necessarily mean pleasing to the eye like a lioness and her cubs on a Valentine’s Day card. 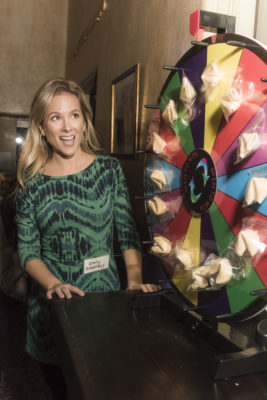 Perhaps this is a circuitous way of saying that purely abstract work (“puddles of paint,” as Bernard Fallon put it) won’t be appearing in this show. However, what one will see in less than two months should be visually inventive and outside the scope of what these now-intrepid artists are usually known for. In the future, people will hesitate before trying to pigeonhole them and their art.

Are You Thinking What I’m Thinking? debuts Sunday, March 15, at La Venta Inn (796 Via Del Monte, Palos Verdes Estates) with art viewing and brunch at 10:30 a.m. and 12:30 p.m. Open to the public; limited seating and reservations required. For additional details email karen@newyorkfood.com.

From March 18 to 30 the exhibition will be shown at the Malaga Cove Library Gallery, 2400 Via Campesina, Palos Verdes Estates. A free reception takes place on Saturday, March 28, from 5 to 7 p.m. Open to the public. RSVP to Colleen Cotter, ccotter@pvldfriends.org. PEN

Are You Thinking What I'm Thinking?, Art show at La Venta Inn