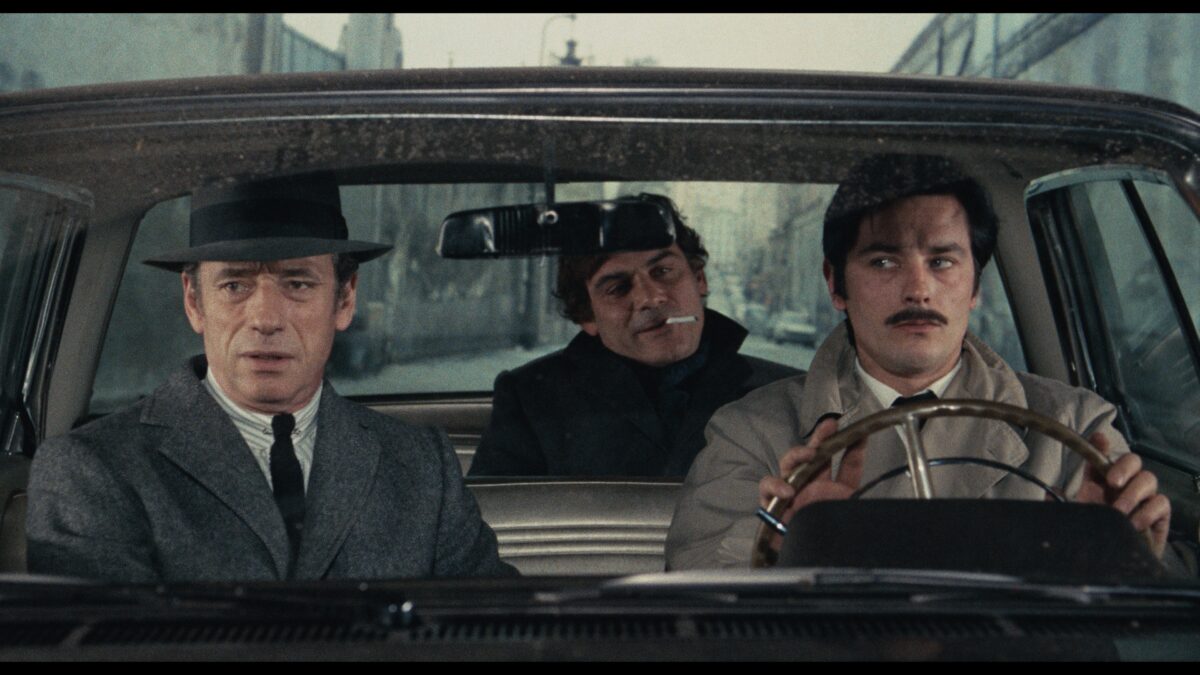 Yves Montand as Jansen, Gian Maria Volontè as Vogel, and Alain Delon as Corey in "The Red Circle." Photo courtesy of Rialto Pictures.

“The Red Circle” (“Le Cercle Rouge”), the stunning heist film by the master director-writer Jean-Pierre Melville, has been given a 4K restoration by Studiocanal and a re-release by Rialto Pictures. If you don’t know this 1970 film by the director who was one of the primary influences on the New Wave film movement of the 60’s, you’re in for a real treat.

Melville audaciously plays his hand at the very beginning with a quote from the Buddha Siddhartha Gautama, “When men, even unknowingly, are to meet one day, whatever may befall each, whatever their diverging paths, on the said day, they will inevitably come together in the red circle.”

Police Captain Mattei is escorting recently captured criminal Vogel back to Paris on the night train from Marseille. Vogel manages to escape and disappears into thin air. Back in Paris, Mattei is excoriated and threatened with prosecution by the Chief of Internal Affairs who believes there are no accidents, only deliberate actions. At that very moment in a Marseille prison, a guard arrives at the cell of Corey, a thief near the end of his five year term, with news that he will be released the next morning. But before he goes, the guard knows of a “job” that will be perfect for him in Paris. He has inside information on the weaknesses of the security system at a major jewelry boutique. All he needs are a couple of trust worthy partners, one of whom is a sharp shooter.

But first Corey needs getaway money and goes to the home of the man for whom he took the prison sentence, Ricco. But Ricco, proclaiming loyalty and gratitude to the high heavens, has betrayed Corey at every opportunity. When Corey is able to “borrow” money from Ricco at gunpoint, there will be retribution, and probably blood.

Vogel, on the run, hides himself in an unlocked car trunk in the parking lot of a diner. Coincidentally, or perhaps not really, that car belongs to Corey who has stopped along the way for a meal. When Corey encounters escapee Vogel, the wheels start to turn. Vogel could be that second man. The straight line begins its curve. Vogel is tough, cold blooded and fearless, but he’s not a sharp shooter; he does, however, know one—a derelict ex-cop named Jansen. They have their gang and now need to prearrange a fence, who declares that the contraband will be very hot. His risk will be exceptional so they will have to be content with paying him a much higher percentage than usual.

Mattei is unconcerned with the threats of his superior; it is a matter of extreme pride that he catch Vogel. He begins to apply intense pressure on his network of informants for any word on Vogel’s whereabouts. Primary among them is nightclub owner Santi who swears he knows nothing, though Corey and Jansen met in his bar. The curved line is showing signs of what it will inevitably become when everyone and everything collides. 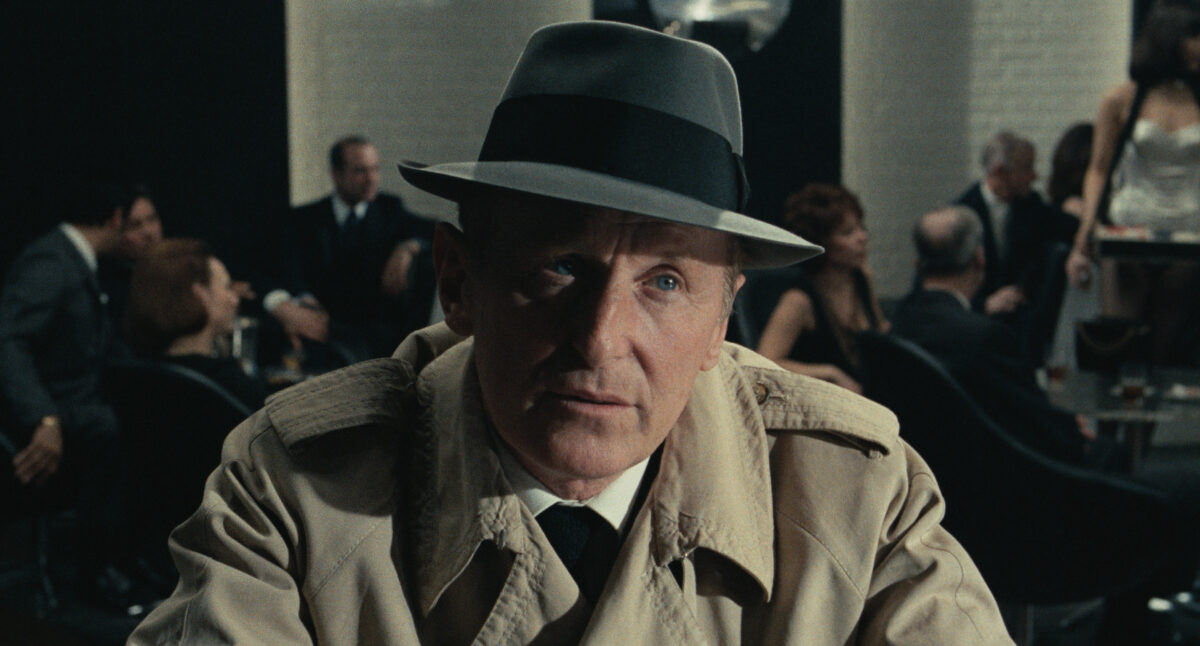 Bourvil as Mattei in “The Red Circle.” Photo courtesy of Rialto Pictures.

Melville’s plotting is outstanding; the characters are fully developed in multiple shades of gray; and the dialogue is crisp. Taking a page (well, multiple pages) from the classic heist pictures “Rififi” (which he had originally been scheduled to direct) and his own “Bob Le Flaneur,” Melville uses extensive periods of silence to convey the tension. Cinematographer Henri Decaë is able to give technicolor a noir look. Decaë, one of the greatest of all cinematographers got his start with Melville on what would be a first film for both of them. That collaboration continued through many of Melville’s most famous films along with those of New Wave directors Malle, Truffaut, Chabrol, and Goddard.

The casting is pitch perfect with Alain Delon, who was already a Melville favorite and is at the top of his game. He uses the dialogue as a prop to the weapon of his silence. It’s almost impossible to ignore his beauty but here it is insignificant to his character and it is Corey that you see, not his physical traits. He is the anchor of this film who constantly cedes control to his co-stars at just the right moments. It is difficult to think of anyone else who could have played this role nearly as well and certainly not as believably.

Yves Montand brings gravitas and grounding to his role as the ex-cop. The introduction of Jansen lying in bed with the DTs, imagining snakes and bugs filling his room and bed is the only over the top moment in the film that is given insufficient support when Jansen is soon going cold turkey and barely breaking a sweat. Although Montand’s natural elegance is used to good end, he is less effective as a gritty cop who quit in disgrace. Gian Maria Volontè is murderously believable as Vogel. And Bourvil, the one-named actor known primarily for his slapstick comedy films, is a revelation as the relentless, patient police captain in search of one prey and unknowingly homing in on something even bigger. His deadpan style works counterintuitively well as a character who becomes something of a puppet master as he increasingly applies pressure to his list of stooges. François Perrier, as Santi, is the perfect weasel who believes he’s in control and yet somehow betrays everyone in an unsuccessful effort to maintain his meager place within the marginal underworld.

Melville was a famously precise and difficult director who was able to get brilliant performances, even in implausible casting choices from his actors. Case in point, Jean-Paul Belmondo as a priest in “Leon Morin, Priest.” He worked with both Belmondo and with Alain Delon three times. It’s interesting to note that he originally planned to team Belmondo and Delon in “The Red Circle” but decided against it when he learned that the two actors had signed to appear together in a gangster period piece that same year. Instead he cast Montand as Jansen, the role intended for Belmondo, which only highlights the questionable suitability of Montand in that role.

Melville, who died at age 55, was quite prescient on some things. When reflecting on his legacy following the release of this film in 1970, he stated,” I don’t know what will be left of me 50 years from now. I suspect that all films will have aged terribly and that the cinema probably won’t even exist anymore. My guess is that the final disappearance of cinemas will take place around the year. 2020, so in 50 years’ time there will be nothing but television.” Not bad as a fortune teller, but as a codicil to his statement, most films that were judged great at the time, are still great; some that weren’t have become great. Television has admittedly often taken over as a source of storytelling but only because some stories are better told in multiple parts, something that cannot be done effectively on the big screen. But giving lie to his statement regarding his own films, if you have never seen this movie, or even if you have, fly to the theater to see it on the big screen. It’s lost none of its original power and with the restoration is even more stunning to experience.

Opening Friday July 16 at the Laemmle Royal as well as the Laemmle Playhouse 7 and Town Center 5.