The steak that would be king 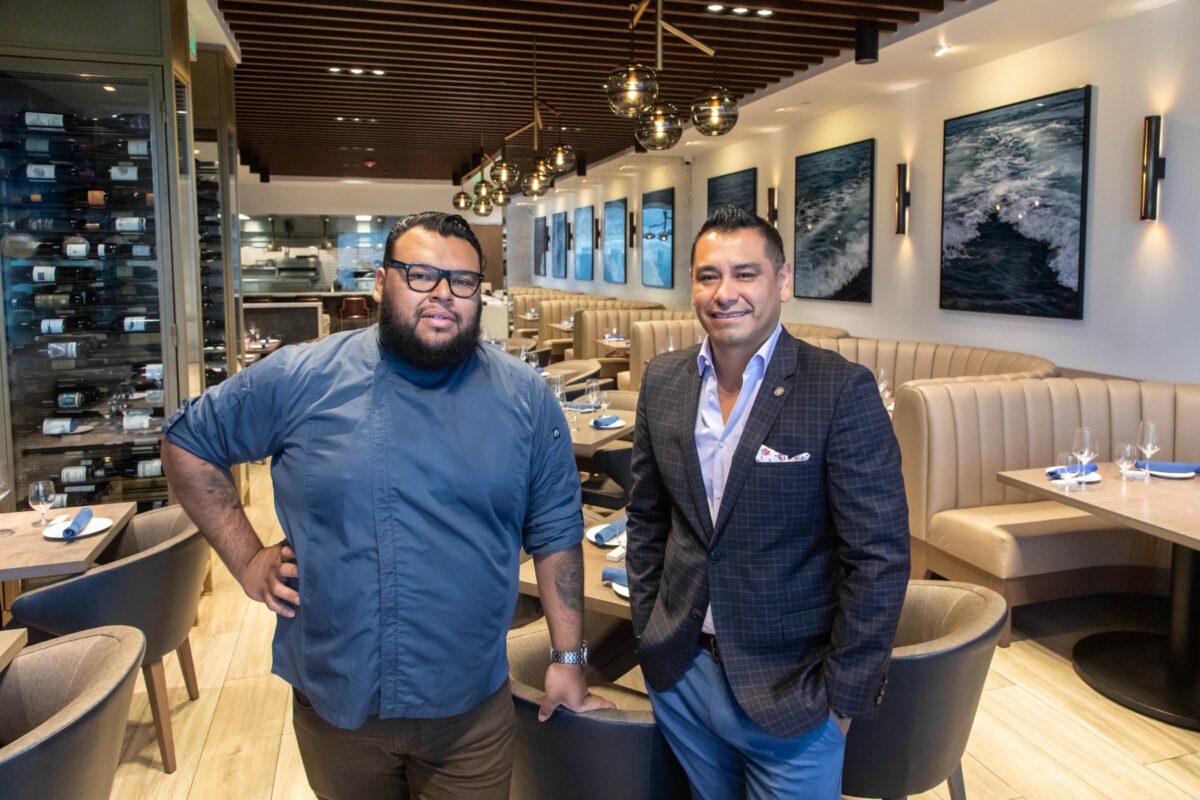 Naming a steakhouse “The Rex” may seem presumptuous, because that title asserts kingship. Another steakhouse might assert that they are the queen of such establishments, or perhaps a prince, but that makes all other steakhouses subjects or vassals. It does make sense because good beef was historically the food of the aristocracy in most of the world, as no peasant in their right mind would kill a cow in its prime of life when it was giving milk, pulling a plow, or doing other useful work.

Redondo’s claimant to royalty opened in May on Avenue I in Riviera Village, and has been doing astonishingly well. I know this because it took me three tries to get a reservation, even for a midweek evening, which is a record many places might envy. We finally got one and I was asked whether we’d like to sit inside or out, and we chose outside based on a report that it was quieter. After we got there, I wished we had chosen differently, because the interior boasts a sleek mid-century design and was not particularly loud. The outside patio was pleasant enough, the tables widely spread, and the overhead light softly glowing after dark, but I preferred the clubby old school vibe.

The menu isn’t as retro as the décor – not a surprise because chef Walter Nunez was noted for innovative vegetable dishes when he cooked at Jardinière in San Francisco. That said, this place really is about the meat, and isn’t vegetarian-friendly due to animal-based stocks in the sauces. Our party of three included one person with a beef allergy, and our server David was conscientious about checking everything with the kitchen before putting in our order. 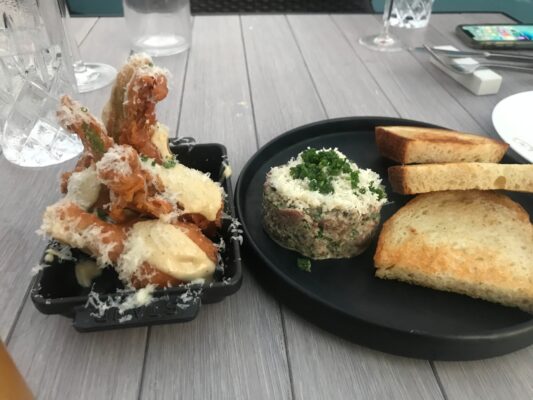 The crispy onion and steak tartare at The Rex. Photo by Richard Foss

We started with crispy spring onions (their riff on onion rings), a peach and beet salad, and a steakhouse classic, steak tartare. The spring onions were fun – whole green onions breaded and fried, topped with Caesar dressing and grated parmesan cheese. Oddly, they don’t have a Caesar salad on the menu, but based on this dressing I’d order one if they did. I’d order the onions again too, because they’re a simple item done very well. The peach and beet salad with herbed goat cheese was an admirable complement to them, some chopped chive and arugula to balance the sweetness of the beets and unctuousness of the cheese.

Unfortunately the tartare was a major disappointment thanks to an excessive amount of horseradish in the mix. Had this been on the side so we might have added it to taste we’d have used half as much, and been able to enjoy the flavor of the meat. As it was, we took a few bites and set it aside.

With our starters we had cocktails that were very well balanced – whoever created the bar menu has a knack when it comes to combining flavors. Some combinations are unlikely – who knew that gin, bitter Cynar liqueur, cucumber, and ginger would go so well together? Somebody figured it out, as well as one of the rare drinks I can remember that used banana liqueur, but wasn’t over-sweet.

There was considerable skill in the flavor combination in the spaghetti with geoduck clam, braised leeks, crème fraiche, and yuzu too. Geoducks don’t look or taste like standard clams – they’re gigantic and most of the meat is from a long, fleshy tube that is outside the shell, the flavor is slightly sweet, and the texture has a moist crunch that is appealing. Pairing that sweet, delicate meat with leeks, yuzu, and a scattering of chopped chives lent a bit of citrus and sharpness that tied everything together. The portion was small, a good shared appetizer or light meal, but it was satisfying. 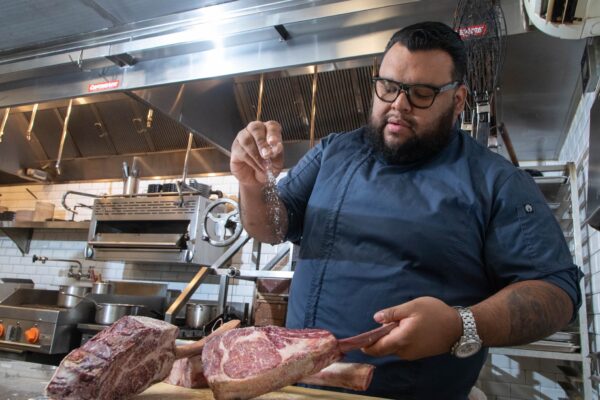 For our main courses we ordered a kurobuta pork chop, the fish of the day, which happened to be john dory, and their “tour of beef” sampler of three small steaks. The kurobuta seems to have been partly roasted and then battered and finished in a deep fryer – that’s a guess, but I can’t figure out how else a thick chop could have such a fine, almost tempura-like crust. It was topped with an arugula salad with kumquats in a citrusy dressing, and it was completely successful. Kurobuta pigs, otherwise known as Berkshire hogs, were imported to Japan in the 1860s, and since there were no native pigs to breed with, they remain a separate genetic strain. They haven’t been crossbred for factory farming and have a richer flavor and juicier meat than other pork, and this chop showed off these characteristics.

The john dory was a seasonal special that I’d highly recommend if it’s on the menu when you go. The fish had been roasted and put atop a delicious pea risotto, an item that really should be offered as a side by itself. The portion of fish was on the small side but with the risotto was sufficient for a main course.

Since we were at a steakhouse I had to have a steak, or rather three of them. The “tour of beef” offered 3-ounce portions of filet, New York strip, and ribeye for $63. I’m always interested in the chance to try different cuts of meat side by side to experience the different texture and flavor and leaped at the chance. This experience wasn’t quite up to my expectations because the three-ounce portions are very difficult to cook to the medium-rare that I had requested. The New York and ribeye were on the medium side of rare, the filet past medium and a bit dry. It’s a technical challenge to get the classic slight char exterior and red center on small pieces like this. The novelty makes it worth trying once, but I’ll have a full-sized ribeye on the next trip. The meats come with your choice of sauces, and I requested a bone marrow bordelaise and a peppercorn sauce that was peppery indeed.

There was nothing but the meat on that plate, so we ordered sides of baby baked potatoes, and broccolini with garum, a sauce invented in ancient Rome that is based on fish oils. If that sounds odd, keep in mind that you’ve probably had another fish-based sauce called Worcestershire – it gets its distinctive tang from anchovies. Garum is more assertively fishy but has the same gigantic blast of umami, and it’s a daring choice to use it in one of the principal green vegetable sides. We all enjoyed it, but those who don’t have a tolerance for rich fish flavors might be advised to pass. The baby baked potatoes were decent but not outstanding, and next time I’ll try the roasted mushrooms that smelled delicious when they were delivered to a nearby table.

The wine list by the glass is small, but well-chosen. We had a Tablas Creek white blend and Cartuja red blend with the starters, with a Paraduxx cab to accompany my steak. The bottle list is a wonder to behold, with some decently priced moderate choices and also superb bottles that will strain most wallets.

The dessert choices were curiously limited and also odd – a banana cream tiramisu, sweet cream sundae, and German chocolate cake. All sounded quite sweet, and we ordered the cake out of curiosity. It was surprisingly good but not at all the classic – the frosting was an oblong blob atop something that looked like a brownie but did have the mix of chocolate and coconut that is in the classic. It was an odd but successful finish to the meal, but I wish they had a larger selection with some less sweet items.

Dinner for three ran $278 for food plus another $110 for beverages before tip. And we hadn’t ordered the most expensive food or anything from the high end of the wine list. At this price point there are still a few things that need work, but the Rex is off to a promising start. I wouldn’t crown them king yet, but they’re in line for the throne.