The taco reinvented in Redondo – twice 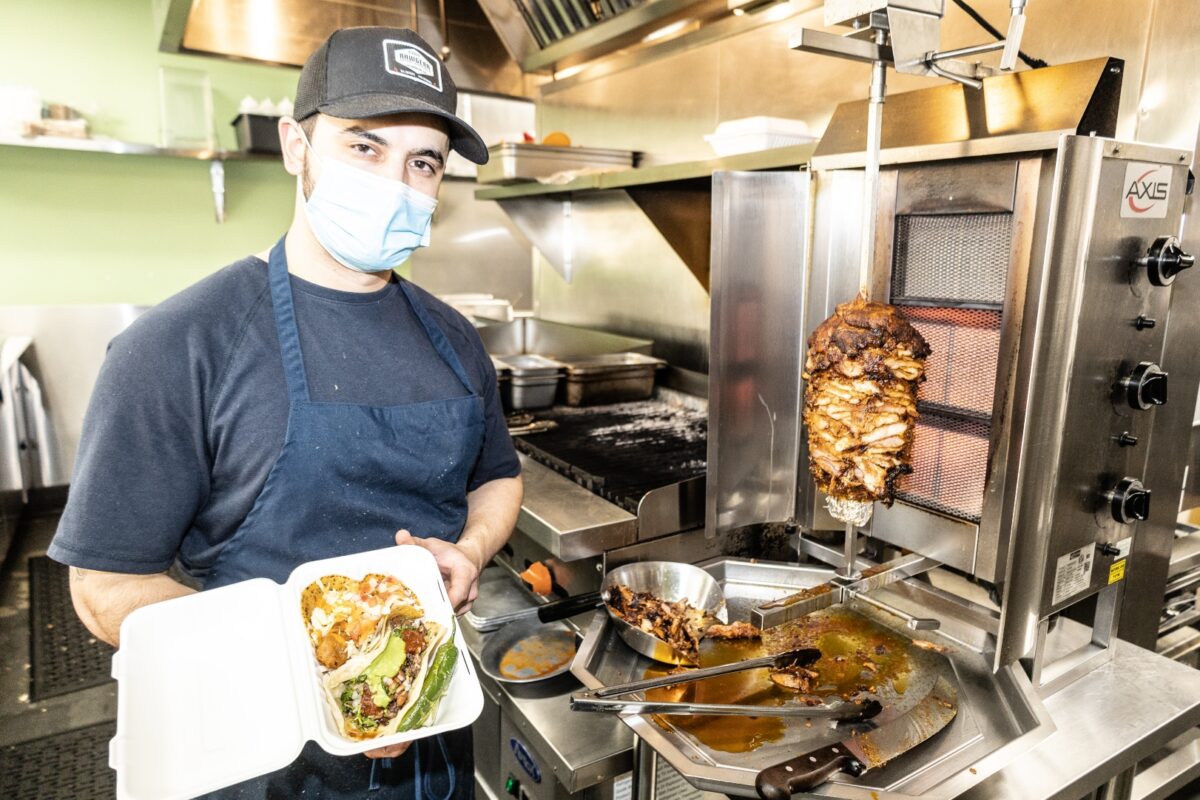 Vida Modern Taqueria and Tigres Fuego have different ideas about the 21st century taco, and they're good ones.

People who grew up in Mexico City find the way Americans eat tacos to be peculiar. Tacos there are a bocadillo, a snack, and making a meal of them would be like eating an entire can of the little Vienna sausages usually found impaled on toothpicks on cocktail party trays. I’m sure people have done that and called it a meal, and I would make bets on which of my friends have done it, but it’s not something you’d see on a menu.

Angelenos love tacos, both the traditional variety and in experimental and hipster versions. The Korean taco craze started in 2008, and opened the gates to putting almost anything in a corn tortilla. They’re fast to make and to eat, and there’s something about them that attracts creative chefs.

Two well-established local restaurateurs who made their reputation serving other things opened very different taquerias recently. I visited them on consecutive days to compare the experiences.

Vida is a collaboration between Mickey Mance of Mickey’s Italian Deli and Justin Essman of Baja Sharkeez. Tigre’s Fuego is a project of the team behind Baran’s 2239. One is famous for old school pizzas, and pastas; and the other known for adventurous contemporary cuisine. 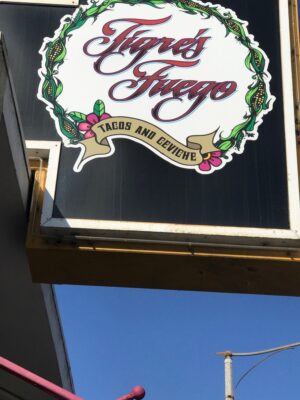 The sign at Tigre’s Fuego is hard to read from a distance, but it’s worth watching for. Photo by Richard Foss

Surprisingly, the one from the contemporary group is far more traditional. Tigre’s Fuego is by brothers Jonathan, and Jason Baran, and chefs Tyler Gugliotta and Jimmy Tapia. The name, which translates into “Tiger’s Fire” is based on the two chef’s nicknames – Tyler was called El Tigre, and Tapia owned a food cart called Tacos Fuego. Tigre’s Fuego isn’t much bigger than a taco truck, with a few stools at a postage-stamp sized counter and a trio of small, sidewalk tables, and they don’t try to pump out a huge variety from the small kitchen. At first, they only offered tacos and ceviches, but they recently added a burrito and a weekly special.

On our visit we opted for a Baja-style ceviche, a beer-battered swordfish taco, a turkey carnitas taco, and the California burrito with al pastor marinated pork. The Baja ceviche is one of the less spicy of the seafood items served here, made with rockfish, pico de gallo, cucumber, avocado, and chamoy sauce made from pickled fruit with chillies. That sauce sets this apart from most ceviches served locally thanks to its sweet, mild heat – it’s reminiscent of Korean gochujang sauce, in case you’ve ever tried that. There’s a little Jalapeno heat in the citrusy marinade, plus sharp onion and citrus, so some strong flavors are competing for attention here. It’s cool, refreshing and deliciously hot, all at once, and I definitely recommend it.

The seafood chunks in the swordfish taco are beer battered, and fried, and served with the standard cabbage, crema, and pico de gallo, mango bits, and some of the house chile sauce. If you order these, eat them as soon as they arrive to enjoy the maximum crunch from that batter, because it goes soft quickly. The recipe is standard, but very well executed.

The turkey carnitas is anything but standard. They confit the meat in duck fat to get intense flavor, and a crisp exterior, then chop it so the mix is moist and slightly chewy. I heard someone at a table speculating that they use turkey instead of pork because it’s healthier. That may be true, but the Aztecs had no beef or pork available. They did have plenty of turkeys. This taco has very ancient roots, which you won’t care about at all while you’re actually eating it because it’s amazing. I enjoy carnitas a lot and this version is superb.

I’m not actually sure who first put French fries in a burrito, and as a general thing I haven’t been a fan of doing so because it adds carbs ,but not much flavor. It works here because the fries are cooked very crisp, and add crunch to the mix of meat, beans, cheese, and avocado with cumin crema. I chose al pastor style as soon as I saw the rotating skewer behind the counter, because very few places in the South Bay make it in the traditional manner. That involves stacking marinated meats on a vertical skewer with layers of onion, garlic paste, and seasoning and letting it slow-roast, usually with pineapple on top so the citrus juice trickles down, infusing the meat. Here they put citrus in the marinade instead, reasoning that it will give every slice a more even flavor and avoid adding too much acid that can make the meat mushy. This meat has a firm texture and deep, complex flavor, so it works. The burrito is served with a very zingy red sauce and some tomatillo salsa verde, but we saved that for our chips because there were plenty of great flavors already.

Tigre’s doesn’t serve alcohol, but had house-made drinks including pineapple-mango juice blend and hibiscus-agave juice. I found the former very good, the latter a bit too sweet for my tastes. Lunch ran about twenty bucks per person and was worth every penny. Bring a picnic blanket or cushion and be ready to head for the beach or a local park if the seating is all taken. 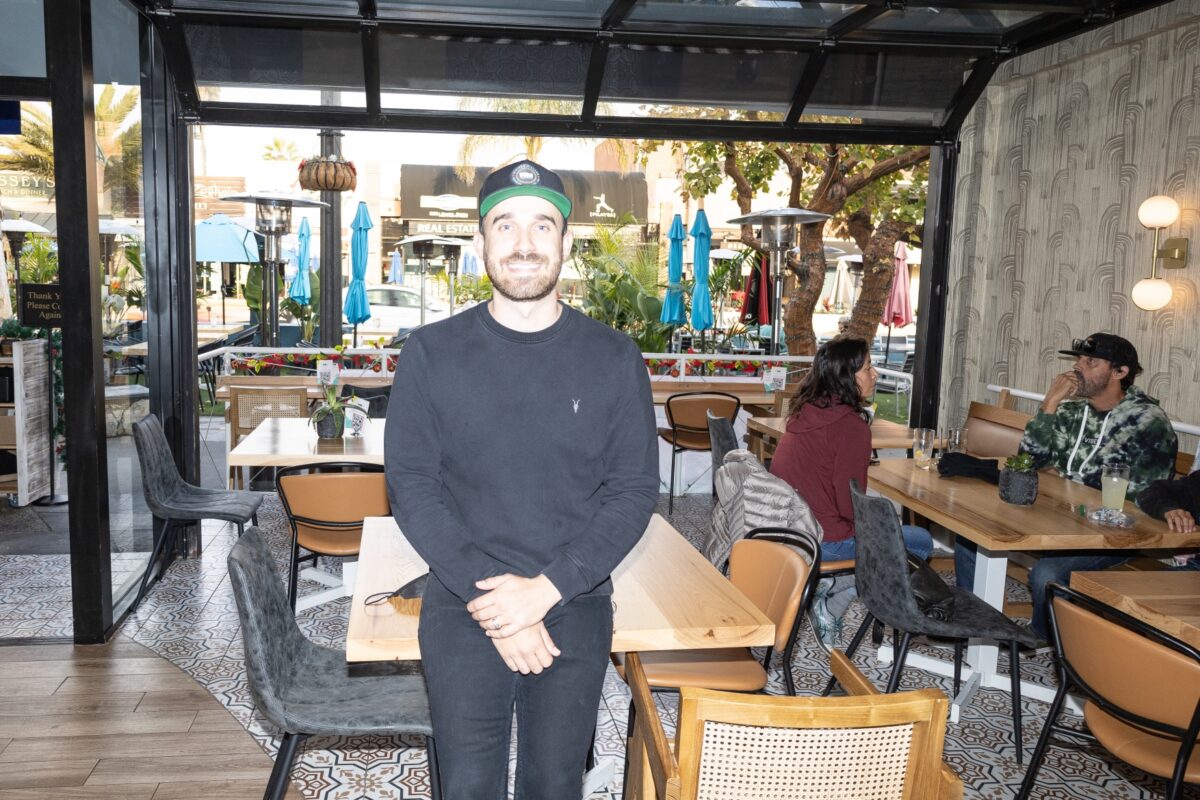 Vida Modern Taqueria has no problem with seating, either inside their digs on Catalina Avenue or on the outdoor dining deck. Their menu is much larger and more experimental, with nods to modern East LA ideas. I had visited before and tried a shrimp taco, cinnamon carnitas taco, and a small Mexican Caesar salad. Technically all Caesar salads are Mexican because they were invented in Tijuana in 1924, but this version included toasted pumpkin seeds and fried chip strips, plus cotija cheese and an avocado lime dressing. It only vaguely resembled the traditional version, but had an echo of the flavor balance, and since it was good, I didn’t quibble. The shrimp taco was solidly executed and had a nice citrusy bite thanks to the lime crema, while the cinnamon carnitas was handled with delicacy. I expected the cinnamon to be a powerful flavor, but it was subtle – if I hadn’t been told it was there, I would have wondered what was adding interest to every bite.

On my return trip we ordered guacamole, a trio of crisp-shelled ahi tacos, octopus, codfish, Beyond Beef tacos, and a chicken chimichanga. The guac was on the citrusy side, with little or no onion, and only a breath of jalapeno. It was decent but not exceptional. The ahi tacos were a cut above, thanks to the unusual addition of wasabi-brussel sprout slaw, a novel idea. Sprouts are a member of the cabbage family and cabbage is usually used in seafood tacos. The balance was perfect with the wasabi just enough to spice things up. Unfortunately whoever was adding the lime crema was a bit enthusiastic that day – I’d have preferred less of it, or for it to be on the side. 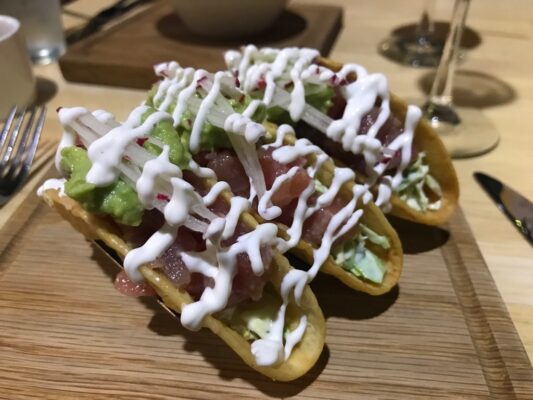 The codfish taco nailed the preparation of the standard item, while the Beyond Beef taco was excellent. It was every bit as good as the best ground beef tacos I can remember having, and maybe better, thanks to judicious spicing that added a smoldering background heat modified with herbs and spices. If you haven’t believed that you could really enjoy plant-based meat, this is a taco that will change your mind.

We were slightly disappointed by the octopus taco with grilled jalapeno and grilled red onion, because the flavor was unexpectedly timid. This item is described on the menu as highly spicy, but it wasn’t actually much spicier than the Beyond Beef taco. My wife had been skeptical of even taking a bite of it based on the description, but enjoyed it. That was a win for her, but I had been hoping for more zip.

After the parade of flavors in the tacos, the chimichanga was a bit of a disappointment because it had been overzealously sauced with both lime and chipotle cremas. I wish I had been given the option of having these on the side, because it was hard to taste anything under the sauces, and the crisp flour tortilla shell turned into a slippery, soft mess almost immediately. It was a surprising misstep from a place that had been doing very well up to then.

We started our meal with cocktails from their low-alcohol menu, which unfortunately needs work. They replicate traditional cocktails with low-alcohol versions of vodka and tequila, which creates the taste of a watered-down drink. Full strength alcohol has textures, astringency, and oils that are part of the experience, and you miss them when they’re not there. Forget trying to mimic a classic and create a satisfying drink with low-strength alcohol – it’s not easy, but it can be done. An example is their sangria, which is very good.

For dessert we had churros that are fresh-fried to order and served with ice cream. These were very good, though drizzled with more sweet chocolate sauce than I’d prefer.

A very full dinner for two at Vida Modern Taqueria ran just under $100, of which about $30 was alcohol. Having had both, which would I go back to? Both, for different experiences. Vida has some fine items and all they need to do to make the others better is to stop drowning them in sauce. Tigres Fuego has their act dialed in.