The Warner Grand Theatre, a gem from the golden age of cinema 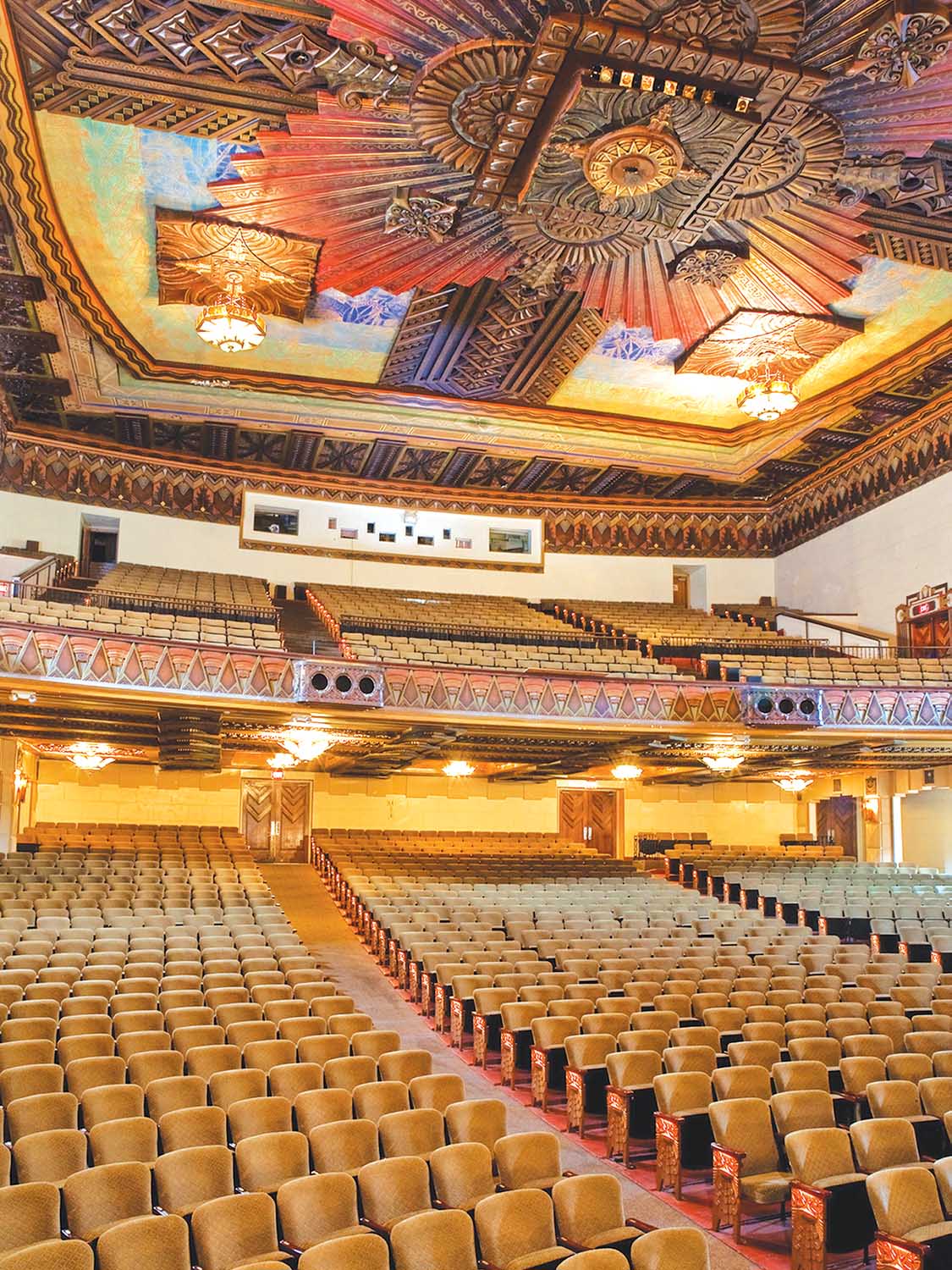 The auditorium of the Warner Grand Theatre, looking towards the mezzanine. Photo retouched by Heli and courtesy of the Grand Vision Foundation.

They weren’t called picture palaces for nothing, and that’s why prosaic terms don’t quite fit when describing the insides of the Warner Grand Theatre in San Pedro. If today’s rolodex theaters are like weekend yachts, the Warner Grand would be a luxury liner, a land-based flagship for a vanished golden age of cinema. But hulls rust, paint peels, and decks crumble.

The Warner Grand (then named the Warner Bros. Theatre) was designed in 1929 and built in 1931. It’s touted as a prime example of Art Deco, a decorative style originating in the 1920s with (per Webster’s) “geometric motifs, curvilinear forms, sharply defined outlines, (and) often bold colors.” Among the things it came to embody was a kind of hip, nonchalant, Jazz Age sensibility.

On the other hand…

“It’s art deco, but it’s movie-palace Art Deco,” says Liz Schindler Johnson. “I’ve heard it called exuberant; there’s Art Nouveau elements in it,and some people even call it Neo-Byzantine because the design and the proscenium of the stage is very Egyptian-looking. So it’s a combination of styles that are very intricate.” 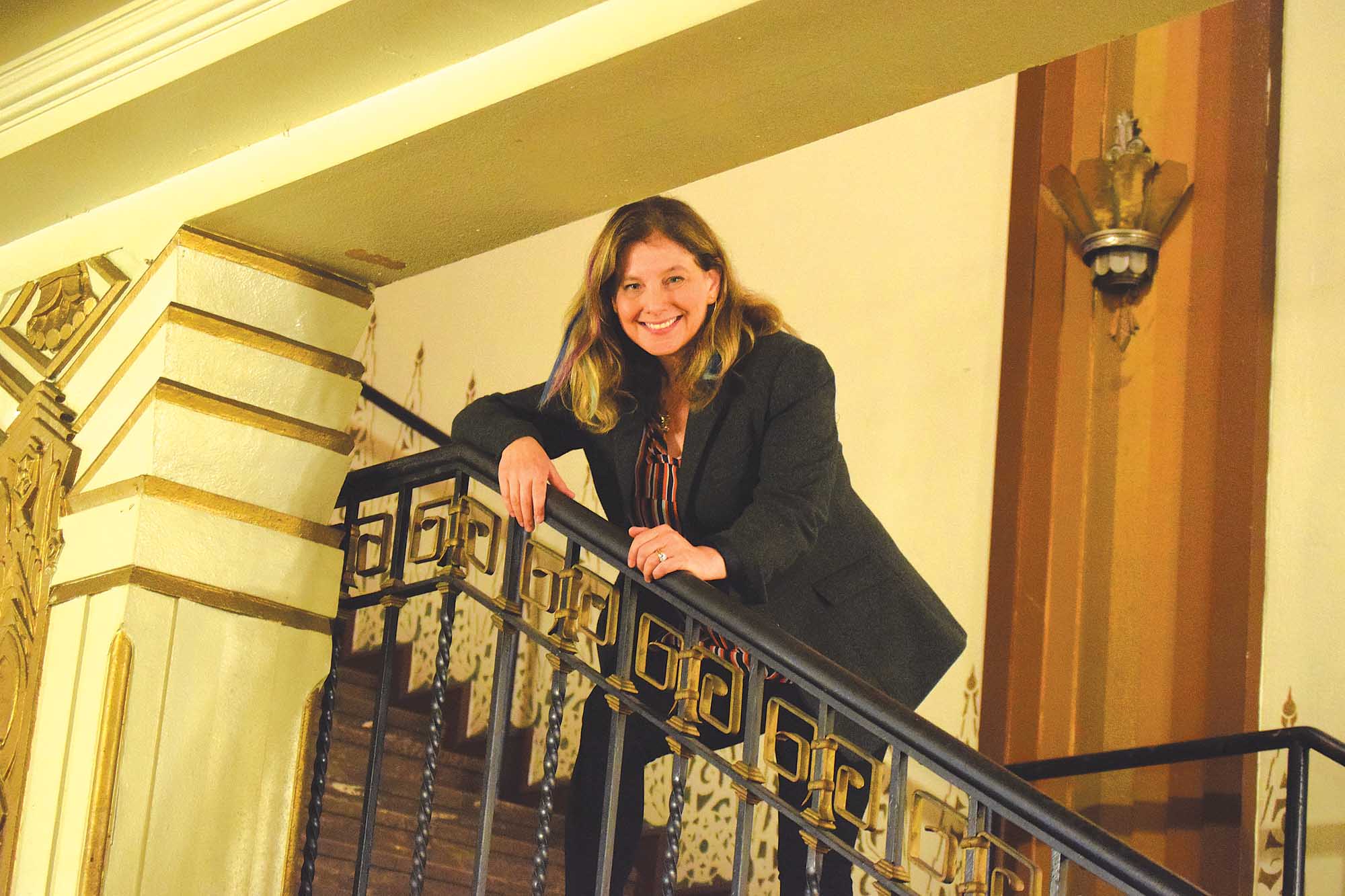 Schindler Johnson is as good an authority on the Warner Grand as you’ll find. Her undergraduate major was art and she attended graduate school at UCLA in Urban Planning. Although the City of Los Angeles now owns the building, Schindler Johnson is the Executive Director of the Grand Vision Foundation, a non-profit organization established in 1996 to preserve and restore the Warner Grand Theatre. Grand Vision’s stated goal is to revitalize the community through the performing arts and to date they’ve raised over $4.5 million to help in upkeep and upgrades. Grand Vision’s current project, and it’s why you’re reading this, is called Love the Lobby.

Years of use and abuse

The refurbishing of the theater has been proceeding, sometimes in fits and starts, for over 20 years. This is clearly noticeable when one steps into the 1,500-seat auditorium, it’s mezzanine alone able to accommodate more patrons than many of today’s shoebox theaters. After the marquee and its accompanying neon, beacon-like vertical sign were restored in the late 1990s, Grand Vision launched its Save the Seats campaign in 2003.

Over the course of some 80 years the seats had taken a beating, and had been recovered or patched up innumerable times. A seat specialist was called in who dug through the layers of material. As a result, says Shindler Johnson, “We were able to recreate the original pattern that was on the seats in 1931 when the theater opened.”

It’s one thing to have your four or six dining room chairs upholstered, but 1,500?

The Foundation got to work, and then some.

“We raised more money than we had ever expected,” Schindler Johnson says. “There was a lot of community support. And so we were able to redo the seats and also we enlarged some of them to take away the teeny-tiny seats that were uncomfortable for today-sized people.”

The restoration extended beyond the seats, and included improving the stage rigging, the sound system, the carpeting, and the floors.

The bulk of the restoration inside the auditorium was complete by the time the recession hit in 2008. People weren’t exactly reaching into their pockets as much as they had been just a couple of years earlier.

In the meantime, mindful of their stated mission to revitalize the community through the performing arts, the Grand Vision Foundation acquired a storefront building just down the block from the Warner Grand and created the Grand Annex, an intimate music-listening room, reminiscent of McCabe’s in Santa Monica, but often with a cabaret-style seating arrangement. It seats 150 and plays host to various musical acts, from Americana and folk to jazz and blues. “We built up something new there,” says Schindler Johnson, “while we also take care of something old and try to keep both ends of the community going through the arts and the performing arts.”

Yes, yes, you must be thinking, but what about Love the Lobby? What’s that about? 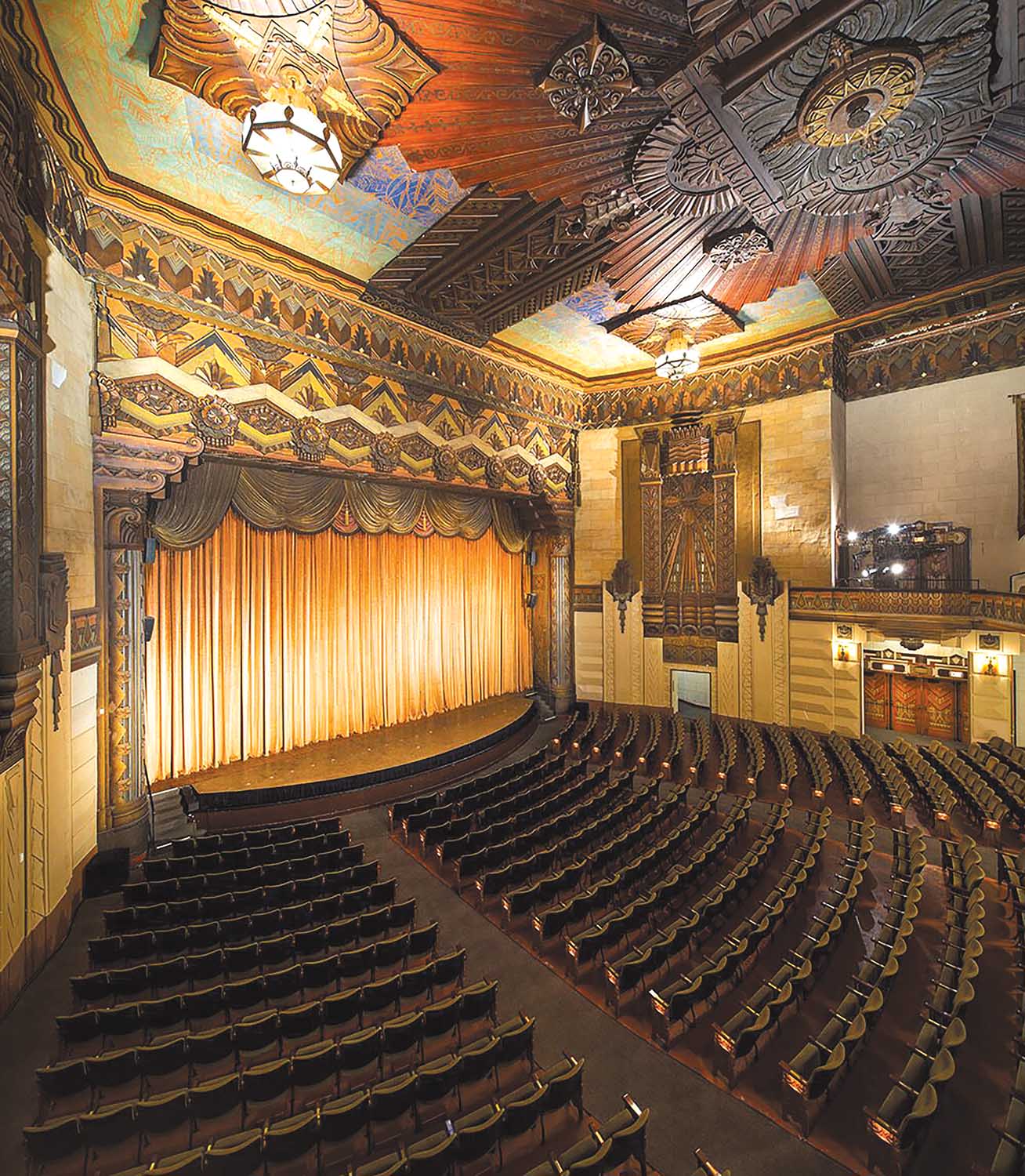 The auditorium of the Warner Grand Theatre, looking towards the stage.

To be pleasantly wowed when stepping into a magnificent foyer or entrance hall is often a good feeling and it can set the tone or mood for what follows. Sure, the Warner Grand has a magnificent auditorium and there’s a splendid view from the mezzanine balcony, but unless you’ve come in through the roof you first have to walk in via the front doors on Sixth Street. And so while the auditorium may dazzle us when we pause before descending the carpeted aisle, “You don’t really get that feeling when you come into the lobby. It’s rather pedestrian,” Schindler Johnson admits. “It just hasn’t been given the love it needs.”

Schindler Johnson is pretty clear on what she wants: “I would like to see this not-very-beautiful lobby turn beautiful again.”

One may ask, Why or How did its beauty fade? The first answer is, Because everything was painted over in a rather bland off-white. Why did that happen? Well, now we have several possible scenarios.

“It was probably peeling,” Schindler Johnson replies. “Probably wasn’t in the best condition, and they probably didn’t have the money or know-how to fix it.” A second answer might be that the advertised gold-and-silver leaf floral designs were not really gold and silver but rather a cheaper pot metal that tarnished into something mustardy in color. “So people forget or don’t like it, and it’s just not what it was.”

The third possible reason why the lobby was literally and liberally whitewashed could have been because the curly and zigzag designs simply looked dated or fashioned out. In any case, Art Deco was a short-lived style. It should be mentioned that not only did the theater have other names (the San Pedro Theatre in 1937, the Stanley Warner San Pedro Theatre in 1956, the Warner Theatre in 1957, and the Stanley Warner Theatre in 1959), but during the 1970s it screened Spanish-language films and was called Teatro Juarez. At that time, according to the Los Angeles Conservancy website, “changes to the opulent interior included covering the plush velvet seats in red, green, and beige vinyl as an homage to the Mexican flag.”

It was only in the 1980s that the theater became the Warner Grand.

Fortunately, there are a couple of photographs that show the lobby of the Warner Grand during its heyday, and one can discern painted flourishes on the walls, the columns, and on the ceiling’s timbered beams. Not so fortunately, the pictures are in black and white, but the overall pallor appears to have been more of a pale café au lait in tone, which jives with the basic hue of the auditorium.

A restoration artist was brought in, and then another, for exploratory work. In various places on the lobby walls and ceiling they’ve cleared some patches and retouched others to help convey not only what was there but the scope of the task that lies ahead, as well as estimates regarding cost. In the meantime, paint is beginning to come off the walls, but for now this isn’t necessarily a bad thing:

“My impression,” says Schindler Johnson, as we examine one section of the lobby wall, “is that time is helping us to do our own historic preservation because in places the paint is peeling off by itself, revealing the layers under it. Under the layers, the old paint is preserved.” As with the seats in the auditorium, it’s a bit like excavating the ruins of a recent civilization to get at the remnants of the older civilization that came first. Eventually, and this is the goal, the lobby will sparkle in its original color and decor.

Originally there was a fountain inset in the wall between the two doors leading into the auditorium. Long ago dismantled and boarded up, it’s one more project waiting to happen, along with replacing the dull red tiles (dating back, perhaps, to the glory days of Teatro Juarez?) with a carpet that would muffle extraneous sounds.

“The carpet had a geometric pattern that I was told was mostly red,” Schindler Johnson says. “As soon as the City of Los Angeles decides they will have a very regular carpet cleaning schedule we will all get together and put in a carpet.”

Of course, without a target date any project can drag on indefinitely. In this case, the goal is to complete the lobby restoration by the end of 2020, or in time for the Warner Grand’s 90th birthday.

Larger donations naturally expedite the financial goal, but one way for members of the public to contribute to the Love the Lobby campaign is to adopt a seat in the auditorium for $350 (four seats for $1,200). The donor is thanked with a personalized brass nameplate that’s affixed to the seat. Currently, about 400 upper balcony seats are available. Although a good sum of money is still needed, the endeavor transcends the monetary because at one time there were a dozen other movie theaters in San Pedro, and where are they now? Where are they in the rest of the South Bay? No one should ever want the last of a dying breed to vanish. When that happens, there’s just no going back.