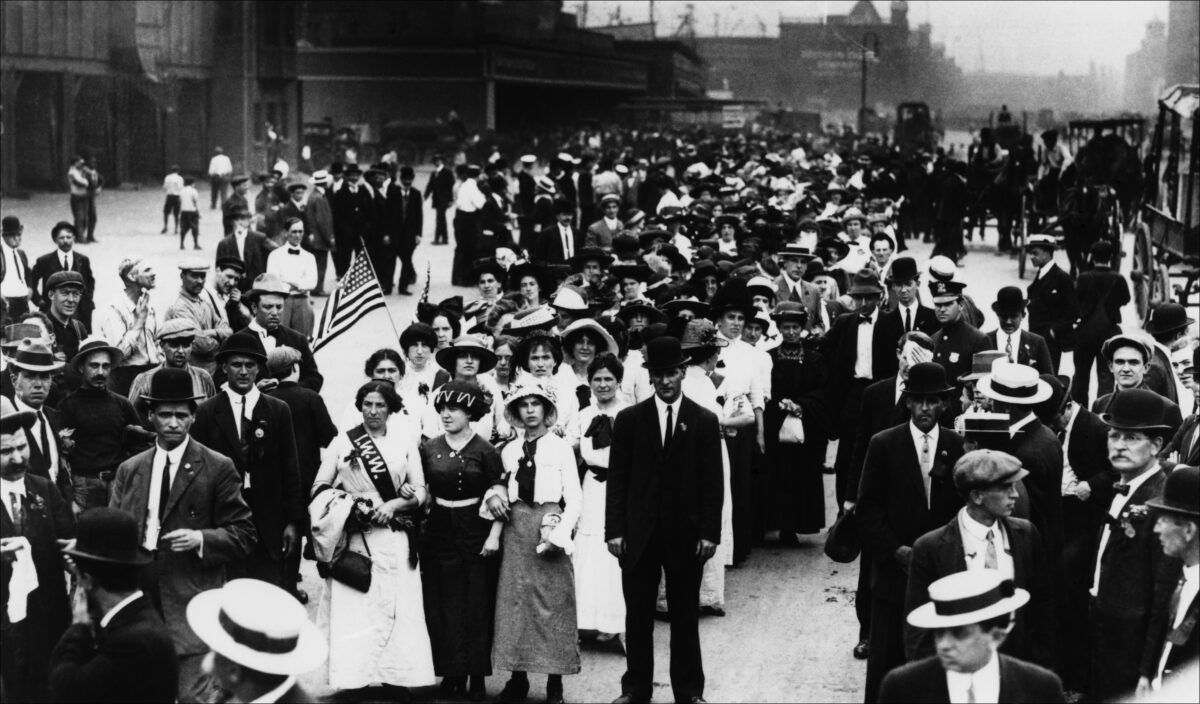 "The Wobblies," written and directed by Stewart Bird and Deborah Shaffer. Photo courtesy of Kino Lorber. 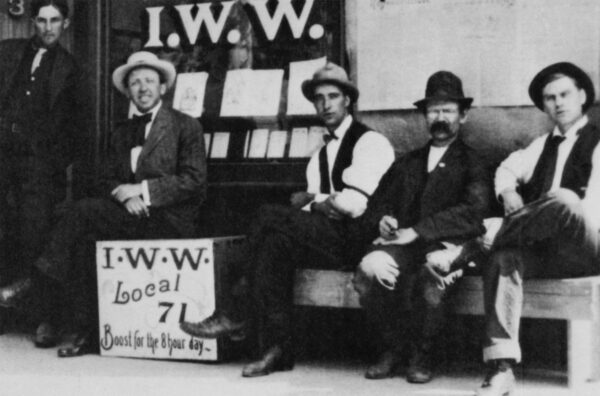 “The Wobblies,” written and directed by Stewart Bird and Deborah Shaffer. Photo courtesy of Kino Lorber.

“The Wobblies,” an iconic documentary made in 1979, has been given a beautiful 4K restoration by the Museum of Modern Art as it enters the Library of Congress National Film Registry. Written and directed by Stewart Bird and Deborah Shaffer, this documentary presents a nostalgic look at what was, at the turn of the 20th Century, one of the most important and radical labor movements in the Western World.

As told through interviews, archival footage, and the music of the crusade, one comes to realize that the IWW, Industrial Workers of the World, was more than a movement; it was, as stated by Roger Baldwin, the founder of the ACLU (American Civil Liberties Union), a religion.

The late 19th Century saw the rise of capitalism as the American population went from rural to urban, as did the jobs. With the rapid consolidation of industry, as exemplified by steel magnate Andrew Carnegie and oil baron John D. Rockefeller, wealth disparity grew. The few with the massive resources hired the unskilled poor at wages so low that life was unsustainable. Labor unions for skilled workers had begun to pop up but there was no one to represent the masses of unskilled labor who kept the fires of industry stoked. Such was the disdain for these workers that Jay Gould, a financier and railroad speculator, was quoted as saying “I can hire one half of the working class to kill the other half.”

The IWW was created to protect the interests of the working class while also bringing about the demise of capitalism. Founded in 1905, well before the Russian Revolution, it had as its goal to “support the struggle of the working class against the employing class until the workers of the world organize as a class, take possession of the earth and the machinery of production and abolish the wage system.” Early leaders of the movement were Eugene V. Debs, Big Bill Hayward, Mother Jones (yes, there really was a Mother Jones), and Elizabeth Gurley Flynn. They set their sites on unskilled laborers in the mining, agricultural, and lumber industries. The unionization efforts were targeted toward those on the bottom rungs of the labor ladder — immigrants, women, and African Americans.

The goals of the IWW were radical for the time: shorter hours (an 8 hour day), and higher pay. The titans of industry were adamantly opposed to these goals and did everything they could to prevent their implementation. Whenever and wherever possible, the IWW organized the workers and led strikes. So offended by these demands, the captains of industry employed local police, government militias, and thugs to break the will of strikers. Some of the strikes worked, most notably a strike by mill workers in Lawrence, Massachusetts for higher pay and shorter hours. The militia, some of whose members were on Spring break from Harvard, was brought in to break up the movement but the violence against this largely female work force shone an unflattering light on the owners and the strike was settled in labor’s favor.

Worried leaders of industry learned to better control future strikes by passing laws that restricted free speech and organized meetings and employing increasingly more violent tactics using the police and the military. Local governments found ways to turn the tables and charge union organizers and followers of crimes perpetrated by anti-unionists, finding ways of prosecuting strikers for the deaths of their fellow organizers who had been shot by the local security forces.

The goals were good but eventually the leaders of the IWW set their sights above the workers and attached their anarchist views of capitalism to the struggle, losing sight of the day to day struggles of the workers’ need for immediate relief.

The success of the IWW can be attributed to helping those working under the most horrific and dangerous conditions such as lumberjacks. Aid for migratory workers was more elusive and sometimes just amounted to protecting them from predatory rail workers who tried to shake them down as they rode in box cars from one field to the next. When the leadership came to their aid and rode the trains with them, the engineers and stokers stopped targeting them. But then a bigger menace reared its head in the form of hijackers bent on stealing the money the union leaders were carrying from one stop to the next. If you have ever heard the expression “grease the wheels,” it refers to hijackers getting pushed off trains by the union organizers. Falling off the box car, they were ground up under the wheels – hence “greasing the wheels.” 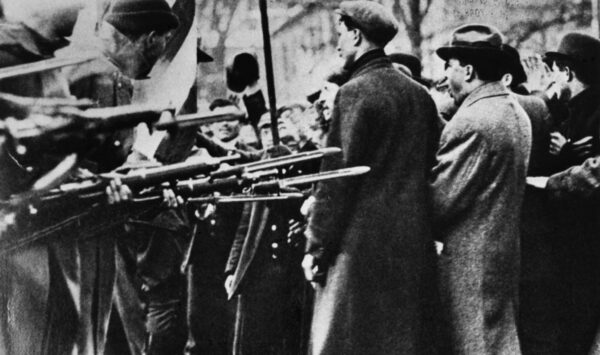 “The Wobblies,” written and directed by Stewart Bird and Deborah Shaffer. Photo courtesy of Kino Lorber.

The advent of World War I spelled the death knell for the IWW. Working together with the captains of Industry, the full force of the U.S. government was unleashed against them as the IWW was accused of being German agents when they fomented strikes. They were prosecuted under obstruction laws for their anti-war activities. Big Bill Hayward was arrested along with 100 other IWW members on “conspiring to hinder the draft, encourage desertion, and intimidate others in connection with labor disputes” in 1918 for anti-war activity. He fled to the Soviet Union in 1921 rather than serve a sentence of 20 years. The sentencing judge? Kenesaw Mountain Landis, the first commissioner of Baseball who presided over the Black Sox scandal. The wholesale prosecution of the leadership followed by the deportation of hundreds of immigrant workers based on “suspicion” of anti-American activities was too much weight to bear and the union soon disappeared from view.

But Bird and Shaffer don’t want this idealistic, Socialist, and unrealistic movement to disappear entirely from view. In 1979 they were still able to find survivors of the movement to interview. All still loyal to the crusade of the organization speak reverentially of their time as laborers who benefited, albeit briefly, from the efforts of the IWW leadership. They talk of the soup kitchens that were started to feed the hungry and the camaraderie they felt. Pulling archival photographs from the time and underscoring the film with the songs of the day, Bird and Shaffer create a long-lost world. There really was a Joe Hill and he wrote many of the anthems still remembered by the interviewees. So many of these songs were resurrected during the 60s folk era; songs like “Hallelujah, I’m a Bum” and “Pie in the Sky” by Joe Hill that states “You’ll get by in the sky when you die” which was a parody of the Salvation Army hymn “In the Sweet By and By.”

“The Wobblies” is, in its way, a wistful film, one that fits very much into this era of massive income disparity. With what we know about humanity, the us vs. them, and life in general, it’s easy to see why this would fail. Grandiose plans and goals usually do, but somehow you do have to try. It brings to mind the great Tom Lehrer and his song “Folk Song Army” that could have been written about the IWW movement. “Remember the war against Franco? That’s the kind where each of us belongs. Though he may have won all the battles, We had all the good songs!”

Opening, appropriately enough on May 1, International Workers’ Day, at the American Cinematheque in Los Feliz.