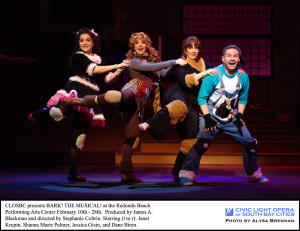 If you gathered up all of the musicals that the Civic Light Opera of South Bay Cities has produced during its almost 20 years, and you put them into one great big pile, “Bark! The Musical!” would be the runt of the litter. All bark; no bite.

There isn’t a story or plot, but rather a flimsy pretext: In the first act, Dane Biren as Rocks, the new pup in town, is dropped off at Deena’s Doggie Daycare, where five other canines have been boarded. Each has its little doggie bed on one of the tiers of the set, while the onstage combo placed to the right provides live accompaniment. Visually and musically, it works well.

The problem with Rocks is that he can’t bark, so the other dogs help him out. And that, boys and girls, is pretty much it.

Because there’s nothing here that approaches a narrative, it’s unlikely that the viewer will empathize with the characters. For example, Harrison White plays King – the old gray mare of the pack – and toward the end of the show he delivers a somber but sappy dirge about how his boy-owner Billy promised him the world when they were both young, but later ran off and presumably married a cat lover, and now King is ready to croak. Which he does.

Unfortunately, King’s demise isn’t moving because the show’s creators haven’t given us a good reason why we should be moved. They’ve just provided a diverse collection of trite songs that try to be lyrically clever, and so the whole thing condenses into a musical revue that’s jazzed up to some extent with a string of high school skits.

Maybe grade school, when we consider that the second tune, its subject fairly obvious, is called “Whizzin’ on Stuff.” Biren sings this one – and I hope that by now someone has pulled him aside to say how foolish he looks (no offense intended; I’ve seen him in other plays and he’s a credible actor). The third number is called “Three Bitches,” and it’s sung (naturally) by the trio of girl dogs – Jessica Gisin as Golde, Janet Krupin as Chanel, and Shanna Marie Palmer as Boo – in high-pitched Betty Boop voices that’s reminiscent of a bad moment out of “Little Shop of Horrors.” The additional actor not mentioned, Justin Michael Wilcox as Sam, looks like he was headed off to an audition for “West Side Story” but made a wrong turn.

Of the trite songs that try to be clever, a couple of them succeed, in particular “Il Cane dell’ Opera,” sung by the high-strung and spoiled diva Chanel (her owner was into opera – clearly Poochini). Krupin has an agile, versatile voice, and pulls this one off, with all the antics that go with it, rather nicely.

Costumes? The actors don’t wear any, just fluffy knee pads and wrist bands and so on. It’s not enough. They never impress us as canines, just retarded human beings.

Which is too bad, and which I state with much regret, because all of them – and especially Palmer who sort of looks like Stevie Nicks in “Rhiannon” mode – give spirited performances. We can even applaud the martyred director, Stephanie Coltrin.

Sometimes the choreography edges into the impressive from the ho-hum, but at the end one has only a two-word (So what?) or three-word (What’s the point?) response.

It’s possible that “Bark!” is better suited for the Hermosa Beach Playhouse, where it would have been more intimate and taken less of a bite out of the pocketbook. But, like “The Green Room,” another dog that the company tried to one-over on us, it would still have been a clunker.

No one goes to a musical expecting to be educated or to gain profound insights into human behavior, but neither does anyone go expecting their intelligence to be insulted with pure drivel. Unless you’re looking to acquire a bad case of cultural food poisoning, turn around and run: This doggerel should be avoided at all cost.