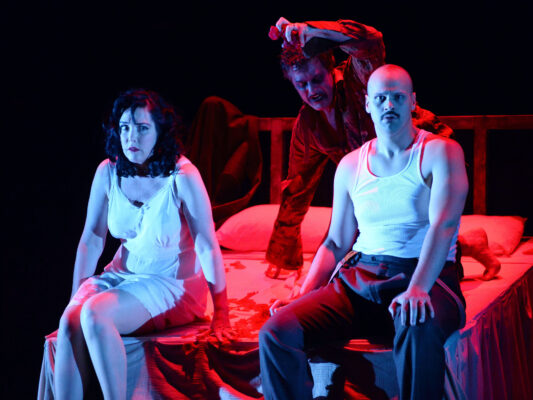 In 1999, while the world was looking forward to the new millennium, Tobias Picker was gazing back more than a century, to the novel Thérèse Raquin that Émile Zola had written in 1868. Picker had already composed the operas “Emmeline” and “Fantastic Mr. Fox;” Zola would go on to write Nana, Germinal, L’Assommoir, and several other classics of the naturalism school of downer French literature.

With librettist Gene Scheer, Picker has had a field day with the madness and mayhem of Zola’s tale of doomed love. Murder is not new to opera, and neither is suicide, Picker said before the performance last Saturday. Drowning in opera, he added, is not that common.

To this should be added incest, adultery, and ghostly revenge.

Without any discernable loss, Zola’s story, set among the working class in Paris during the 1860s, has been bumped up a few decades to post-WWII Paris, 1945 for Act I and 1946 for Act II, when the scent of conflict and occupation still lingered.

As with many of Zola’s heroines, Thérèse (Mary Ann Stewart) has been trapped in her dreary social milieu virtually since birth. She has been coerced into a dull marriage with an invalid cousin, Camille Raquin (Matthew DiBattista), whose mother, Madame Lisette Raquin (Suzan Hanson), has seemingly arranged all this in order to be assured of a caretaker both for her son and for herself in her old age.

Along comes the dashing, good-looking, and physically strong Laurent (Ed Parks), who may be an old friend of Camille but is also something of a moocher. Before long he is setting his designs on Thérèse, and she’s more than willing to meet him halfway.

Camille admires and trusts his friend, and so when Laurent pushed him overboard and into the Seine while the two of them and Thérèse are boating, he’s horrified in addition to being terrified. 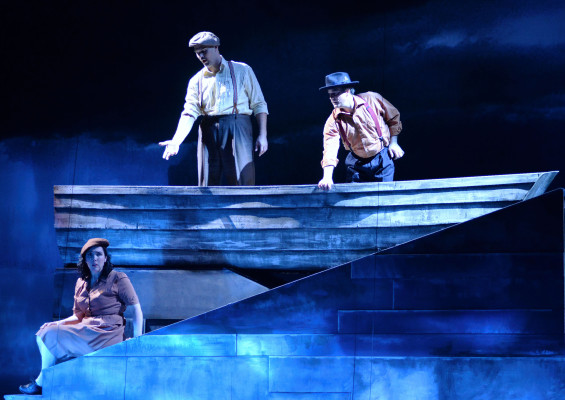 At this point, with the sky the deep color of a bruise and the music both dark and agitated, we’re essentially immersed in a noirish thriller, think Hitchcock, maybe even David Lynch, and the first act ends with a pronounced exclamation point.

Eleven months pass, Camille’s death has been accepted as accidental, but in the interim feelings of guilt have been consuming Thérèse no less thoroughly than the river consuming her husband. From here on out, in addition to her singing – and there’s a wedding night aria-lament that’s first-rate – Stewart is a study in inner torment.

In this sense, she’s somewhat like Lucia in Donizetti’s opera, but perhaps much more like Lady Macbeth, and it’s hard not to think of LBO’s production of Ernest Bloch’s “Macbeth” from a couple of seasons back.

There are three characters with incidental, supporting roles – Ani Maldjian as Suzanne, Zeffin Quinn Hollis as Olivier, and John Matthew Myers as Monsieur Grivet – who serve as the choir, if you will, meaning that they are family friends whose presence exudes a normality that contrasts with Laurent’s and Thérèse’s increasing paranoia. 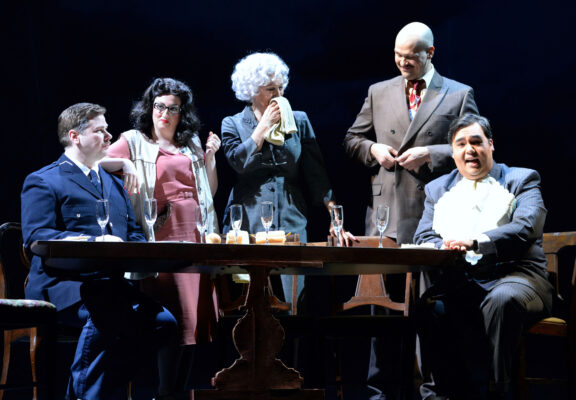 The remorse that Thérèse feels not only becomes contagious, but while she and Laurent are sitting on their bed the ghost of Camille seems to crawl right up through it. It’s a real “Dawn of the Dead” moment, and no expense or makeup kit is spared in transforming DiBattista into a veritable zombie. But it also give the singer the opportunity to clear out his pipes (“While I drowned, they kissed!”) and sing a gorgeous and heartrending aria.

If that doesn’t scare the pants off Thérèse, what will? Her babbling is overheard by Madame Raquin, who finally understands that what happened on the river was no accident, but she soon lapses into a catatonic state – unable to convey to anyone what she knows.

Well, where else can a naturalistic novel go but down? Thérèse, her nerves shattered, drinks poison, and, hopelessness like a cloud before him, Laurent follows suit. If there’s anything surprising here it’s that, traditionally speaking, opera singers take a long time to die. Between a fatal dagger thrust and the glazing of the eyes a tenor usually gets in two or three more arias. But here there’s no fooling around, and death descends quickly, like a guillotine. Then everything goes dark.

So, what are we left with? An impressive, jolting, heavily atmospheric work that calls to mind Puccini’s “Il tabarro,” also set in Paris, on a barge in the Seine, in fact, but the moody and dark production values are more reminiscent of other LBO productions, not only “Macbeth,” noted earlier, but Stewart Copeland’s “Tell-Tale Heart” and the Philip Glass opera, “Fall of the House of Usher,” the latter illuminated by lighting director David Jaques, whose talents are again on display in “Thérèse Raquin.”

Tobias Picker has composed a score that goes from cohesive and tonal to frantic, that pulls and pushes every emotion possible, and which must have been challenging to write and then rewarding to have written. He’s a major voice in contemporary opera, and the chance to experience this one should not be lightly dismissed. My verdict? Here’s hoping that Andreas Mitisek and Long Beach Opera will further collaborate with Picker in the years ahead.