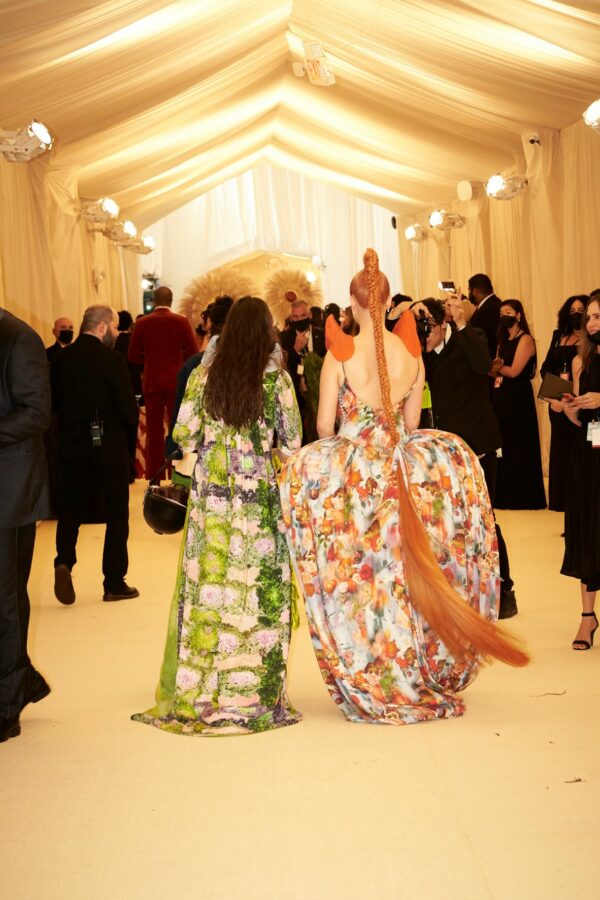 by Stephanie Cartozian and Kevin Cody

Even a casual reading of the many magazine, and online articles about Peninsula High graduate Hillary Taymour invoke images of a strong-willed, defiant, Type A personality.

The irony is those are the qualities Taymour rebelled against when she left the Peninsula for West Hollywood to become a fashion designer, at age 19. And those are the qualities that over the past two years have made her the subject of articles in Vogue, Harper’s Bazaar, GQ, the New York Times and Newsweek; and made her a social media star on fashion insider websites such as The Zoe Report, The Wildest, Ssense, Dazed, Fashionista, and Glamcult. 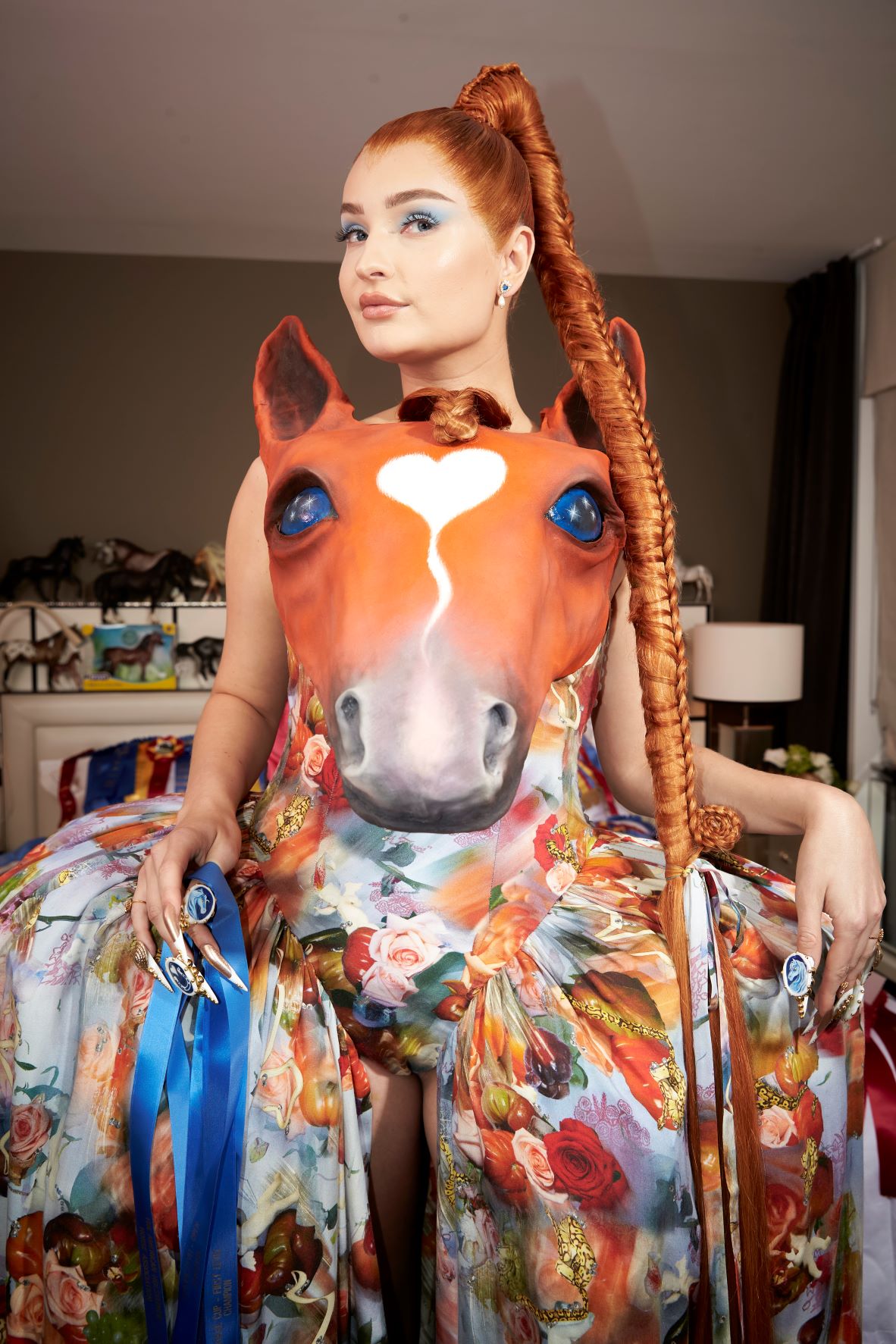 Taymour is the founding designer of the fashion house Collina Strada. Her clothes are available in mainstream stores such as Nordstroms, and Urban Outfitters, and in New York, and London luxury boutiques such as Forty Five Ten and Assembly. Prices range from $275 for a hoodie, to $500 for dresses.

During this past March’s New York Fashion Week, Harper’s Bazaar wrote, “At the eye of this cultural storm is Hillary Taymour, the creative director of Collina Strada. She has the twisty long hair of a TV teen witch, the attention of celebrities like Rihanna and Lorde, and the nerve to make phenomenal cosmic clothes with an itty-bitty carbon footprint.”

“I love doing runway shows, I’m truly a show pony,” Taymour wrote in an email interview with Peninsula. “It is the most stressful, intense work ever. We work until midnight, sometimes until 4 a.m., every day for about three weeks until the show. But the payoff feels great. I get to correct previous mistakes, and keep perfecting my craft.”

Fashion Week offers a stage where Taymour and other designers from small fashion houses can go head to head with their larger rivals.

“Working with my long time collaborator [photographer] Charlie Engman we were able to create these amazing videos at runway shows that really put us on a level playing field with the large fashion houses. The videos are a must watch on our YouTube channel,” she said in her email.

Her shows include models in wheelchairs, models over 50, and transgender and nonebinary models.

By her own account, Palos Verdes was an unlikely launching pad for her success.

“Growing up in PV created a level of expectation that I really felt like I needed to become a doctor or lawyer,” Taymour wrote in her email interview. “Most families have such high expectations, and it can be an unhealthy competitive atmosphere for kids. It wasn’t until I moved out of PV that I realized I could really become whatever I wanted. It was then I had the freedom to go down my fashion path.” 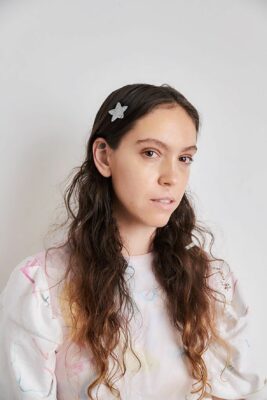 Taymour’s obsession with fashion, and her defiant personality were evident at an early age.

“I’ve always been clothes obsessed,” she told The Zoe Report in January, 2021 “I used to throw tantrums when I was little because my dolls didn’t have the right clothes to go where I was going. I always wanted clothes to be different.”

“When I was eight we had a big house, and when one sister went to college, we all changed rooms. And my mom said, ‘Do you want to redo your room?’ she told Ssense. “And I was like, ‘Yes, I need a week to think about it.’ And I brought her all these drawings, and was like, ‘So when you enter, it’s a beach scene, and you have to walk up onto this plexiglass, and it’s going to a platform, and there’ll be sand underneath and lights coming through, and we’re going to knock down this wall and put an aquarium in.’ And she’s like, ‘I thought we’d get a bedspread and paint it yellow.’ I cried for two weeks. I couldn’t talk to her.

“And then my parents were shocked when I didn’t want to go to school for accounting.”

Taymour had horses and a Jack Russel terrier named Ringo. But little else was conventional about her younger years.

“I was very surf punk, but very weird. I’d wear the same thing for days, I didn’t care. I did go through a phase where I wasn’t dressing as loud, but I was in a toxic relationship,” she told Ssense

To placate her parents, she attended Loyola Marymount after graduating from Peninsula. But not for long

“I paid a Harvard student to write an English paper for me — I paid this kid like $200 — and then my professor gave me a C,” she told The Zoe Report. “I got really upset and [the professor] was like, ‘Do you want to go talk to the dean about it?’ and I was like, ‘No, I’m just going to drop out, this is stupid,” she said.

In 2009, at 19, she moved to West Hollywood, and enrolled in FIDM (Fashion Institute of Design and Merchandising). That same year, she began making leather, and quartz harnesses, and other fashion accessories that became popular among Los Angeles rock musicians. 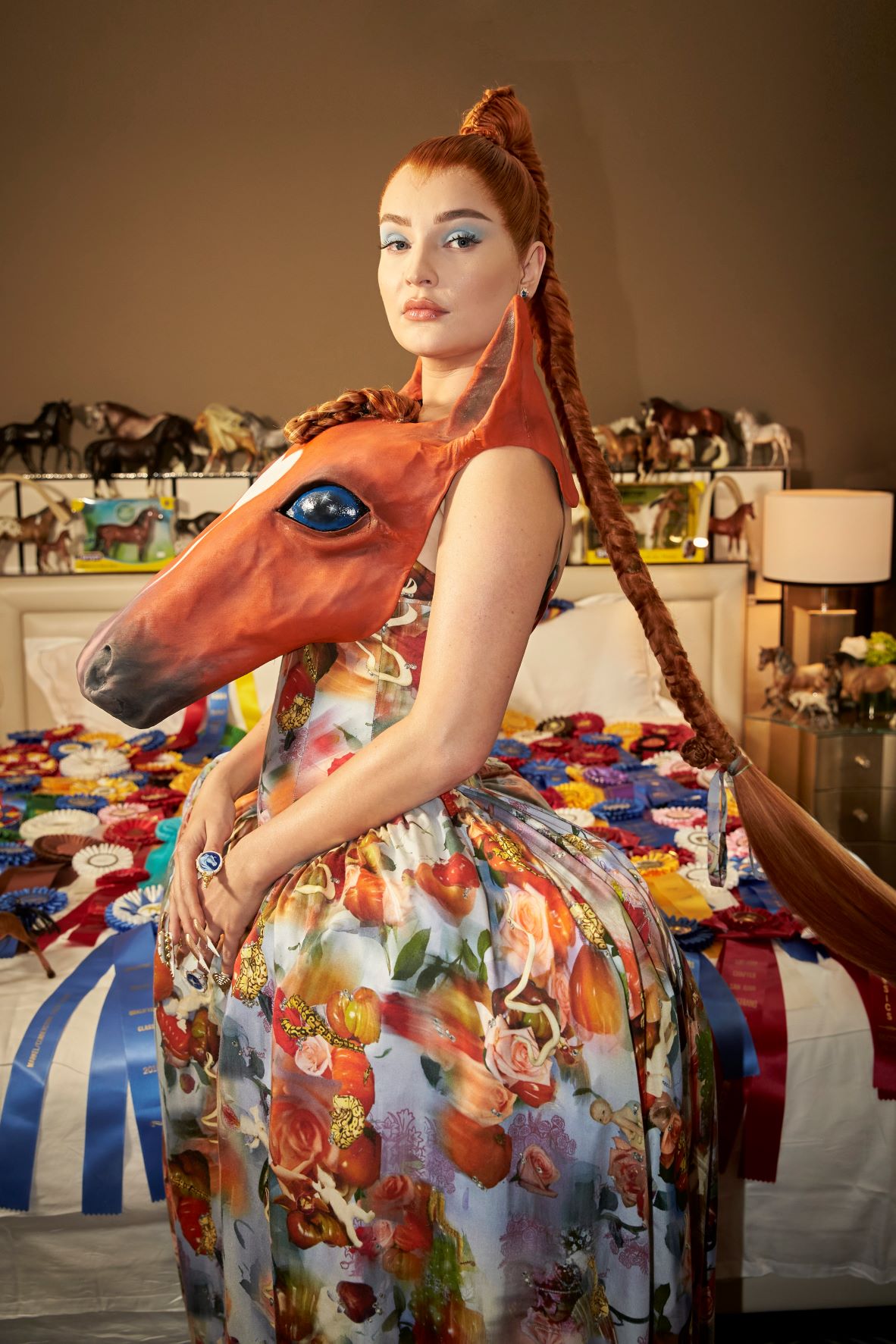 The name of her company is a play on her first name.

“Collina means hill in Italian, and strada means road. It’s like an alter ego,” she explained in her email.

In 2010, a chance encounter gave her the confidence to move to New York

“I was in Las Vegas,” she wrote in her email, “and someone asked to buy this harness I was wearing. I needed it as a sample for a trade show, so I couldn’t sell it. But that’s when I knew I was doing something special.”

“I wanted to do ready-to-wear, and at the time, you couldn’t really have a successful ready-to-wear label in L.A.,” she told The Zoe Report. “And I hate L.A. I don’t fit in there. I don’t know how to not work constantly, and I think L.A. is where you go to chill…. So I came here [New York], where everyone works all the time.” 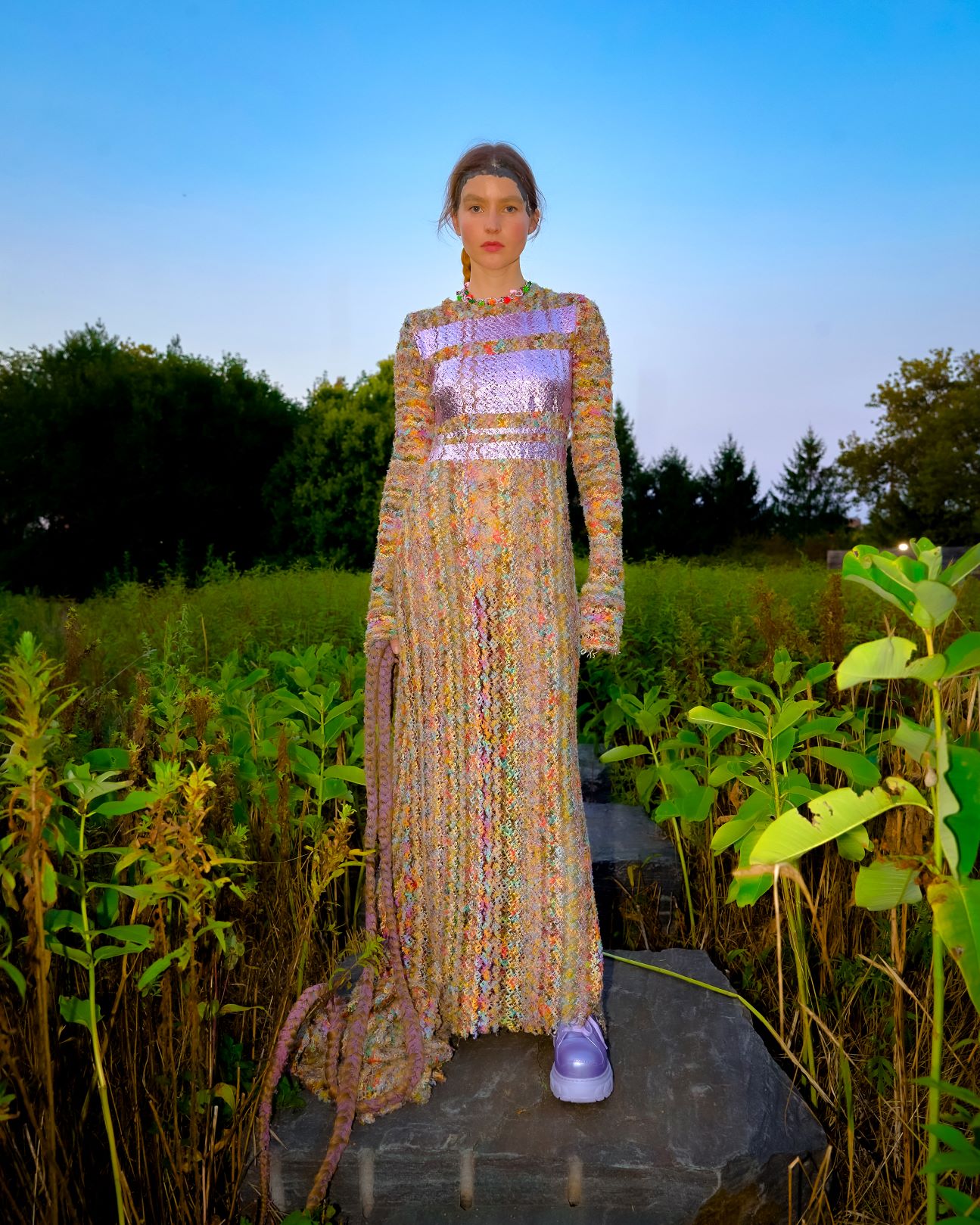 Taymour describes her designs as “slow fashion,” a term of art, which she explained in her email: “We keep a lot of our same bodies, and concepts seasonally in the collection. I really wanted to create a unique marketplace where, if you see someone on the street wearing the brand it doesn’t ever feel like last season’s product. It’s more like, ‘Oh you have that Collina printed button up.’ It’s more of a collectible that way,” she wrote in her email.

Not all retailers are fans of “slow fashion.”

“Sometimes we hear from retailers, ‘It looks too much like last season.’ Well, look, if someone buys a dress from me in 2018, and they still want to wear Collina in 2022, they shouldn’t have to buy another dress. This is the meaning of slow fashion,” she told Harper’s Bazaar

“Collina Strada is a platform for climate awareness, social awareness, change and self expression. We are a platform where we can really advocate for the beliefs and systematic changes we would like to see happen,” she wrote in her email.

Taymour’s sustainability focus has led Collina Strada to becoming an industry leader in the use of new, organic fabrics.

“There were no sustainability classes when I attended FIDA. In today’s fashion books, we are a leading example. I do my research and people approach us with new technologies,” she wrote in her email.

She works with “deadstock,” (fabric remnants), and newly invented fabrics such as rose “sylke” (roses spun into fiber), orange peel fiber, and fabrics derived from milk, mushrooms and kombucha.

“One thing she insists upon before using an organic fabric,” she told Ssense, “is that ‘you would never guess that dress is like, an eco-friendly, made from scratch organic fiber eco-dyed dress, and made in New York City by hand for $600… I’m trying to make it fun, party, loud, but still having a care for the environment.’”

Like slow fashion, deadstock, and organic fabrics are problematic for retailers.

“Stores are like, ‘We want 200 of this jacket,’” she told Harper’s Bazaar. “And I’m like, ‘We only made 40. We can’t ethically make more. Or, literally, it’s deadstock fabric, and there are no more. A lot of buyers and stores aren’t used to being told no.”

Taymour’s break with fashion conventions extends to her work processes.

She was among the first designers to create a new line in the metaverse, and announce it before actually making any garments. She uses FaceTime to visit factories and showrooms.

“I am such a small business that I am able to be nimble, and create on a whim. I love creating in the metaverse because anything goes. You don’t have to think about gravity or materials, you can just conceptualize without any limitation,” she said in her email.

“I tend to get a lot of inspiration when dreaming, and will wake up and write it down. I love watching old rom com films for inspiration on Y2K patterns.  Nature is the ultimate inspiration. Between bugs, landscapes, animals, bacteria, and clouds, every shape and color imaginable is around you.”

Architectural elements in her designs invite comparisons to Frank Gehry, whose designs, he has acknowledged, would also be impossible without computers.

“We could be on the best-dressed list, or the worst-dressed list, but hopefully it’s one of those moments people will reference,” Taymour told Vogue. ‘Remember that time Kim Petras and I dressed up as horses for the Met Gala?’ We certainly won’t be forgetting it any time soon.”

In her email, Taymour noted, “Each designer tends to continue with a certain theme. Dolce Gabbana, The Row, Gucci, Caroline Herrera, Marchesa — they all conjure up a distinct feeling, or an expectation by the customer.”

“I think the hand made elements of Collina Strada are what makes us special. Each print is custom designed, and has the brand name hidden in it. Some prints take up to three weeks to make. Also the unique optimistic perspective of the brand really stands out. It’s about having a point of view and showing ways you can change, but also staying positive about things that are tough to tackle, such as climate change.”

Taymour’s success appears to have brought her to a crossroads, where she must choose between “small and nimble,” and not having to answer to a boss or stockholders; or having the $250,000 needed to launch a line of shoes she has designed. And having influence over her industry’s environmental, and labor practices.

“I feel like if I were a dude, there would be a lot less of this,” Taymour told Harper’s Bazaar. “Some executives have been extremely condescending to me. Then they look at my sales numbers, and the brand reach, and they realize this isn’t some hobby I do in my bedroom after school. I thought it would fade away as I got older, but even in my 30s now, it’s amazing the way I’m sometimes talked down to.”

“We’re a small brand, and we’re showing people what’s possible,” she told Harper’s Bazaar. Then, sounding more like a Loyola Marymount MBA graduate than an FIDM graduate, she said, “I can’t implement systemic change in my own system, you know? I want to be in charge of $100 million, and figure out where materials are coming from, and what we’re doing on the planet. That’s what needs to be next.” Pen