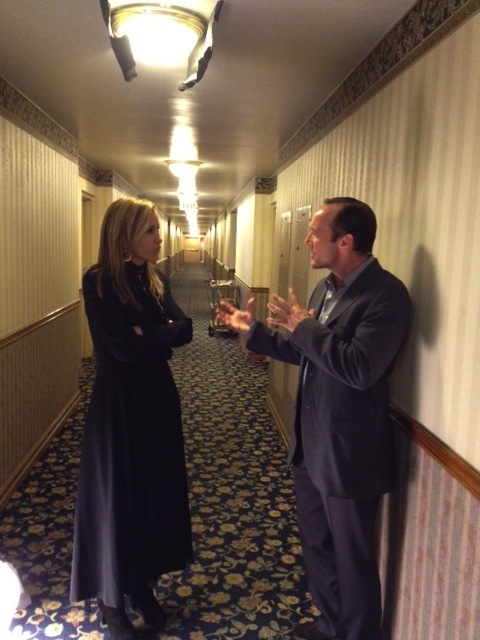 Felicity Huffman and Clark Gregg in "Trust Me" 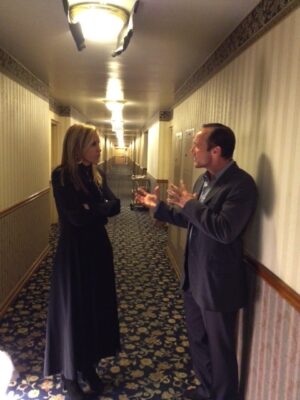 Clark Gregg and Felicity Huffman in “Trust Me”

“Trust Me,” written, directed and starring Clark Gregg is a film that renews your faith in the small independent movie. Gregg, a veteran of both the big and small screen is one of those actors who’s almost always the bride’s maid and not the bride. But “Trust Me” reveals what a triple threat he is and he’s been able to call on his wide circle of highly accomplished colleagues to put together a film that is hopeful until it is no longer. Even more remarkably, Gregg has created an homage to film noir that delivers a punch to the gut when you least expect it.

Howard (Gregg) was a child actor who even then was an also-ran. But like most actors, he’s lived on the “what if” and “almost” for years. He’s the guy you rarely notice and if you do, he’s certainly not someone to inspire passion. But he’s persistent and now he’s an agent representing children. But like his own career, these are the “also-ran” kids, most of whom occasionally book a gig but mainly go from audition to audition with their ambitious stage mothers prodding them on and crushing their dreams with disappointment. In those rare occasions Howard actually represents a child with talent, that kid is usually poached by one of his successful rivals, foremost among them the very slick Aldo. As Howard goes from meeting to meeting in his very old beater, Aldo arrives in style in a hummer driven by his body guard.

Howard, unlike his rivals, really cares about kids. He knows how lonely and depressing that life can be and he offers himself on the altar of compassion. He runs lines, he interprets scenes and bolsters fragile young egos with belief and pep talks. But he’s also an easy read. Coming close to booking a gig for one of his marginal clients, he overplays his hand and loses the job and the kid. To make matters worse, he ruins the audition of a young teen when he hears cries coming from one of the audition rooms. Assuming the worst, he bursts in on what had been the girl’s heartfelt and genius interpretation of the material. The girl still gets the part but Howard’s position at the bottom of the ladder is only solidified in front of Meg the casting agent.

But all is not lost as the young teen, Lydia, seeks him out. She’s recently arrived from Oklahoma with her alcoholic father and she needs a champion and an agent. Her career is about to explode as she is Ang Lee’s choice to portray the lead in the new Harry Potter-type young adult franchise and she needs guidance. This is the break Howard has been looking for his whole life and nothing is going to get in his way, not Aldo, not Agnes, the producer of the film, and certainly not Meg.

The more you see of Howard and his constant minor missteps, because everything always falls in the realm of “coulda woulda shoulda,” the knot develops in your stomach. The guy is a loser, a nice guy, but fatally flawed and destined to be the friend and never the lover or the guy who makes the team and is forever confined to the bench. Even when he meets and charms the girl of his dreams, you just know that he’ll screw it up. But he doesn’t and the hope that Gregg as writer and director give to Howard allows you to lower your defenses and raise expectations. Howard does have a winner within him. Everything is going to turn out alright and here is where I’ll leave you because how Gregg twists and turns this tale is what makes something that seemed so mundane at the beginning become something extraordinary at the end.

For such a small film, Gregg has assembled a formidable cast. Amanda Peet as the woman out of his league is given the chance to show warmth and growth. Alison Janney playing the beleaguered casting director reveals both her exasperation for Howard’s incompetence as well as sympathy for the good points she recognizes. Felicity Huffman has a ball playing hard-as-nails duplicitous producer (is there any other kind?) and the chameleon-like Sam Rockwell once again disappears into his role as Aldo, the uber agent and amused nemesis of Howard. But the film actually succeeds or fails on the shoulders of Saxon Sharbino as Lydia the breakout teen actress. Her depth is breath taking.

Film noir is a genre that is often attempted and rarely executed well. In order to succeed, the femme fatale must fool both the hero and the audience. The stakes must be high and the loss devastating. Suffice it to say that Gregg has made his mark on the genre. He is an accomplished actor but his true calling may actually be as writer and director. It is hoped that his is only the beginning of what could be an even more stellar career. Don’t miss this one.

Opening Friday June 6 at the Laemmle NoHo or catch the advance screening hosted by Clark Gregg on June 2 at the American Cinematheque at the Aero Theater in Santa Monica.