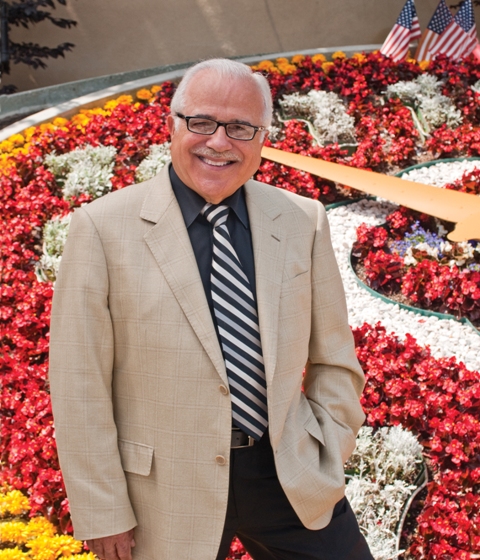 Michel Medawar admires the new flowers planted around his clock he gave to the City of Rolling Hills Estates. Now located on the corner of Silver Spur and Harlyne Norris Drive at the Promenade Shopping Center. Small American flags are placed at the top of the clock. Photo by David Fairchild

An interview with Michel Medawar, conducted by his son Roy

My life and time have been immeasurably bound together. With each tick of the clock, I sense the guidance of God, moment by moment. My journey to Palos Verdes is a measure of the ticks and tocks of the timepiece of my life.

In 1976, at age 41, I was living out my dreams in a land I deeply loved. Lebanon was home. My home. It had only been seven short years since the dedication of the first talking flower clock in the world in the heart of Lebanon, in Beirut. On the hour the clock announced the time in three languages: Arabic, English and French. At noon it played the Lebanese National Anthem. And then, on November 22 each year, tens of thousands would gather around that clock at noon to celebrate the Lebanese Independence Day. I still hear that anthem play for those few moments at my first clock, and though surrounded by thousands, you could hear a pin drop. What a moment, what a wonderful tick of the timepiece of my life.

By that time, I had installed my clocks all over the world, with retail stores and factories to produce and sell my products. And yet, I found myself at a crossroads. The war in Lebanon was escalating rapidly with no end in sight. Personally, I had refused to take a public position politically, by walking carefully down the middle. But the time for neutrality was coming to an end. I knew it. The Lebanese President would have granted any request I made to keep my businesses safe, but that would require me to make a stand. I would have to make a public and definitive political choice, a choice that would place my status and my financial health above my faith and my family. 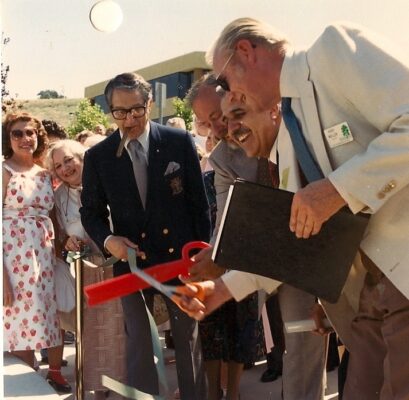 It was another click of the clock, which enlightened the choice I then made. Nineteen years before, at the age of 21, I stood at Lebanon’s famed cliffs overlooking the Mediterranean Sea, determined to end my life. I had chosen a destructive path, without order or purpose. I came to that precipice without hope, ready to throw away my life. But in that moment, God placed his hand on me. I could hear my father’s words echoing in my mind, words about the prodigal son in the Bible. Those words changed my life. The story Jesus told is of a young man who demanded his inheritance and squandered it on life’s pleasures. With empty pockets and an even emptier heart he returned to his father in hopes of being hired as a laborer in the fields alongside his father’s servants. Instead, he was welcomed home as a son, with open arms and complete forgiveness. On those cliffs above the sea, I did surrender that day; I surrendered my life to my Lord and Savior. Those ticks of the clock colored my decision in 1976.

My choice in 1976 was to put my faith and my family above my status at home and my financial resources. It was a difficult, but necessary, decision for me. I had no desire to leave home, but God had even brought peace in that difficult decision.

The United States had already had a tremendous impact on me growing up. In the summer of 1941, a customer walked into my father’s shop for a repair, and wanted his watch back before July 4th. My father turned to me and said, “Son, that man is the President of the American University in Beirut, and the Fourth of July is the day the United States of America declared its independence from the British.” I was six years old, and I remember that moment like it was yesterday. I attended schools taught by American missionaries. I visited the United States on behalf of the Lebanese government. I sponsored seven American missions to come to Lebanon.

And so the decision in 1976 was to leave Lebanon, with my family, and make for us a new home in a distant land. In April of that year, my wife Yolla, and I, with our four children, landed on American soil. I was humbled by the support and welcome we received. All I had learned of America was true. And God had prepared me for that transition.

As we settled, I traveled often to Europe and Arabia, installing and servicing my clocks. I even maintained a small factory and warehouse in Torrance. My wife and I were so blessed and thankful that our children were being educated in this great land and not fighting in a senseless war.

The years past and time moved forward. It was in 1985 that I was informed that we were no longer simply legal residents, but now American citizens. At that moment, I was that six-year-old boy watching the American University President walk out of my dad’s shop with awe and wonder, and here I am now an adopted son of this magnificent nation. With the great gift of citizenship in hand, I had to share something of beauty and historical significance in the only way I knew how, a talking clock.

Wading between two sides of a local political debate, I invited the mayors of Rolling Hills Estates and Rancho Palos Verdes for dinner. On that night, differences were put aside, and I proposed the donation of the first Flower Talking Clock in the U.S. It was to be a gift to my new country and for this paradise in which we live, Palos Verdes. On April 21, 1987, The Palos Verdes Flower Talking Clock was dedicated in the presence of over 500 personalities, including the cities’ mayors and my dear friends Danny Thomas and Casey Kasem.

At the heart of the clock is a Patek Philippe time base designed specifically for my invention of the talking clock. The Time Base was the result of my collaboration with the electronic division of Patek Philippe in the early 1960s. The clock announces the time on the hour. And at noon, the clock plays “The Star Spangled Banner.”

I drive by the clock nearly every day, making sure it is keeping time and the flowers are healthy. I will even provide tours below ground to highlight the technology of the clock. But when I look at the clock what I really see is freedom.

The first talking flower clock in Beirut has been destroyed. My stores and my factories are the victims of the war in Lebanon. As the time of life has passed, there are a few moments that stand out as life-changing. But through it all I learned that God had a plan, a plan that included an American University president with a broken watch, a cliff overlooking the Mediterranean, and a choice to put my faith and my family above all else. He prepared me for each choice, and I follow His will, not mine.

I look back at this journey of nearly 80 years without regret. With my partner and best friend beside me and all of our children and grandchildren nearby, I wake up every morning thanking God for giving me the grace to trust his will.

My life and time – and God – have been immeasurably bound together.