Tziporah Salamon: All dressed up with somewhere to go 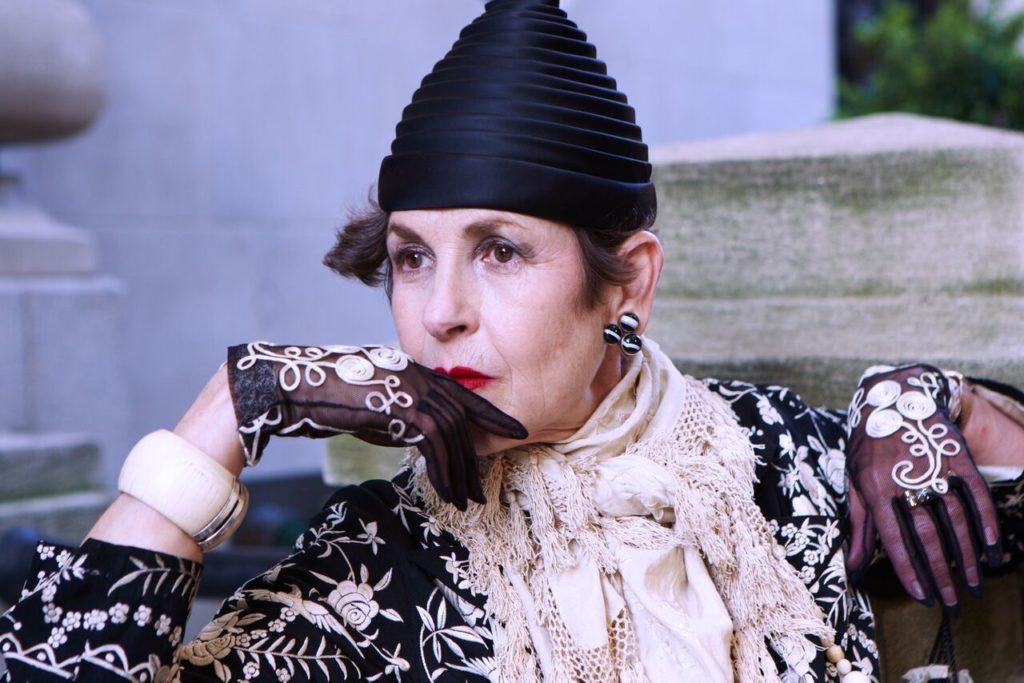 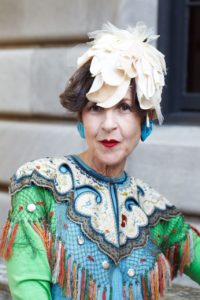 We won’t charge you, but by the time you’re done reading this article you’ll be on your way to becoming the best-dressed person on your block, and maybe in all of the South Bay, who knows.

This coming Sunday, New York-based Tziporah Salamon is giving a two-hour show-and-tell at the Palos Verdes Art Center that elaborates on her newly-released book, “The Art of Dressing,” subtitled “Ageless, Timeless, Original Style.” The key word here, I think, is style, and although the book contains 150 color photographs “style” remains an intangible. Even so, with enough learning and exposure we’ll know it when we see it.

“It’s the image that leaves an indelible mark on the viewer forever,” Salamon writes. “It requires discipline, study, and attention… Style does not just happen; it needs to be cultivated, chiseled, refined.”

Style also implies originality, confidence, and a bit of daring. Toward the end of her book, Salamon profiles several older women whom she admires, and they offer some opinions as well on what constitutes style.

“It always starts with curiosity,” says Valerie Von Sobel. “You have to be devoted to the subject. It comes from a deep desire to express, whether it be a garden or architecture. If you understand proportion, texture, the mixing of unusual elements and adornments, all your aesthetic expressions will sing the same tune. It’s both instinctual and developed.”

“Be emboldened,” says Marjorie Stern, “try something different, don’t pay attention to what others say, take risks, have courage, take a chance, develop your own style.”

Sometimes that means pushing it to the very edge. For example, in her biography of Elsa Schiaparelli, Meryle Secrest wrote of Daisy Fellowes that “She took delight in wearing black to a wedding and red to a funeral.” 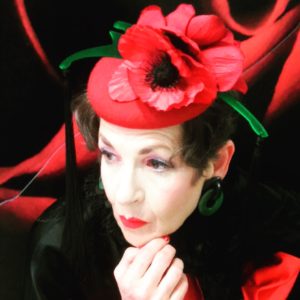 I dress, therefore I am

Now, take all of the above and apply it to Tziporah Salamon, who wakes up each day and composes an entirely new outfit. People she’d encountered would often ask her what she does, and while at the beginning she might have replied that she was a hostess, a cashier, a salesgirl, and so forth, she soon discovered the proper response: “I dress.” But of course this implies more than just opening up the closet and peering inside:

“When I am assembling an outfit, “she writes, “I think of the total look… Dressing is an artistic endeavor with you as the painter, your body as the canvas, the various components of your outfit as the paints, and your eyes as the brush.” Or, as she tells me over the telephone from New York: “I don’t have to invite you to my studio to show you my paintings; you get to see my paintings every day on my body.”

Referring back to my very first sentence, those who have read this far are about to be rewarded with several essential tips, as important to the art of dressing as the Commandments were to the tablets Moses carried down from Mount Sinai.

Know your body and its proportions, height, width, etc., and thus which colors and what shapes work best with it. Within your budget, of course, invest in staples, but remember it’s quality over quantity. In doing so, choose the classic over the trendy because, as you know, fashion is here and gone but style endures. Lastly, don’t underestimate the importance of a good seamstress and tailor.

As for specific articles of clothing and their combined effect, much depends on the occasion and the place. “No matter what,” Salamon writes, “always dress as well as you can, and in a becoming and thought-out outfit.” This is somewhat seconded by what Carmen de Lavallade tells us: “Be conscious of your appearance. You want to look sharp. You want to look respectful.” 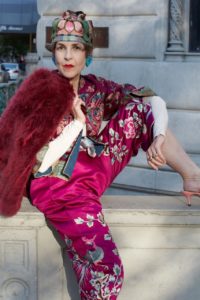 How a person gets to where they are from where they started can often be circuitous or labyrinthine, and both words apply to Tziporah Salamon, the child of Hungarian Jews who survived the Holocaust and relocated to Israel in the early 1950s. Papa was a tailor and mama a dressmaker. Despite empty pockets, despite dusty roads and few amenities, people dressed well, even elegantly (in style, Salamon says, “Budapest was considered a rival to Paris”). If there was poverty, there was also a solid sense of community. Besides, much more than in most places, they were all in this together.

Her father’s tailoring shop was Salamon’s “Magic kingdom,” but in 1959, when she was nine, the family moved from Israel to Brooklyn. Culture shock hardly describes it: Salamon’s first impression of New York was that the sun never shone there. And, figuratively, it wouldn’t shine until many years later. At the age of 12 she even changed her name to “Lynn” because no one had ever heard of “Tziporah” (it’s a biblical Hebrew name; “tzippor” means bird) and naturally the “Tz” threw everyone off.

For all that, Salamon was a bright young lady, and she enrolled at the University of Buffalo. However, she decided to spend her junior year overseas, back in Israel. A decade had passed, but embedded in her mind was a picture of Israel as (in my words) a cross between the Emerald City of Oz and one of those magical paintings by Marc Chagall.

“I told my parents I was going back to study,” she says over the phone, “but I told all my friends that I wasn’t going to come back, that I was hoping to meet an Israeli and settle down and marry and raise my kids there. 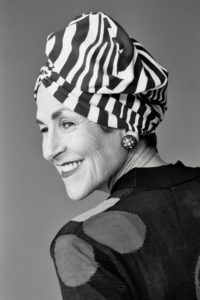 “And what happened was,” she continues, “everything I hated about America in 1959 when we moved here was now in Israel. The first thing my relatives wanted to do was show me the skyscrapers and the supermarkets.”

Skyscrapers? Supermarkets?! Where was the village charm Salamon remembered, where people were so trusting they never bothered locking their doors?

“The first time my heart was broken [was when] we left Israel and came to America. America was the enemy when we got here. And now [I’ve gone] back to Israel to live happily ever after and America is now in Israel. The wound of the nine-year-old girl opened up all over again. And I was just devastated. There was no home.”

Back in the U.S., Salamon graduated with a degree in English literature, attended UC Santa Barbara where she earned a Masters in Education, and then headed up to Berkeley to pursue a Ph.D. in Psychology, with the goal of becoming a therapist. In the eleventh hour, however, she decided to move back to New York hoping for a career in fashion. A photo of Nancy Cunard (think of the shipping line) convinced her to cut her hair, and she immersed herself in the world of designer Coco Chanel, “Vogue” editor-in-chief Diana Vreeland, and others. She embarked upon a string of jobs and at the same time asked herself what precisely she was hoping to become. A stylist? No. A designer? No. A buyer? No. A fashion consultant? Well, that was a possibility. It was while working as a hat- and coat-check girl at a new restaurant that started her wearing a different hat for each day (currently, she has about 300).

Now, she may regret including it, but there’s a small passport-sized photo of Salamon that was taken before she clipped her long brown curly locks, when she could have been in her early 20s, and it reveals a youthful exuberance that few, if any, of the other images can claim. She looks delightful and approachable. I might point out that while most of the pictures in the book, by a variety of photographers, capture a mature elegance (Salamon is, after all, in her mid-60s), I would have hesitated using images taken by Ike Ude who, undoubtedly in a well-meaning effort to eradicate wrinkles and blemishes, has given her subject a waxy appearance and, worse, undermines what the book is about, which is to be cognizant of how you look and to adjust accordingly. 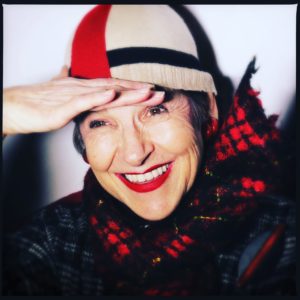 Bill Cunningham was a photographer who pedaled around New York City on his bicycle and shot passersby for his New York Times “On the Street” column. Salamon first met him in 1990, and then of course many times thereafter, by which point she had a minor reputation as a woman who lived for and loved to dress. Salamon had been hoping he’d write the introduction to “The Art of Dressing,” but Cunningham passed away last June.

Not a hard and fast rule, I imagine, but for the most part Salamon seems to dress from the top down, meaning she first selects a hat (“Hats are the exclamation point! The perfect finishing touch to any outfit.”), and then, in roughly this order, a blouse, pants, earrings, shoes, handbag, shawl, coat. She emphasizes good, and comfortable shoes; suggests mixing costly jewelry with costume jewelry, and advises that one should “always wear earrings as they frame the face.” An outfit can produce a different effect by merely changing the buttons. Her choice of bright red lipstick is certainly a strong accent, although I did notice that fingernail polish makes only an occasional appearance.

One may ask, where do you find all this stuff, and isn’t it expensive? Salamon, and many of the well-to-do women she includes in her book (she should have included a couple of women with restrictive budgets), often go to flea markets or thrift stores. But there’s a key, even to this: befriend the people who work in these places. 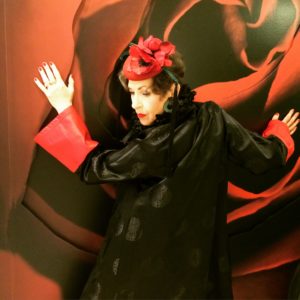 At the PV Art Center, Salamon will present a chronological walk-through of how she’s dressed over the years, and how it’s changed as she’s gone from her 30s to her 40s, her 50s and now 60s. “What I want to wear now,” she tells me, “is very different than what I wanted to wear in my 30s. I talk about the evolution of a woman aging as well, and its impact upon us and our choices.”

She points out that the key chapter in “The Art of Dressing” is the one called “The Keeper of the Cloth,” because it explains, within a religious context to some degree, why she does what she does: “I take the role of dressing, and my being a dresser, very seriously… I really do see it as a calling for me.”

Number one, though, she dresses well to bring delight to herself. But there’s more to it than that, of course:

“I think what I do is I give women permission to dress again, to play in their closets,” Salamon says. “I give them permission, I free them, and I entice them to do it. They look at me and they say, ‘Wait a minute, you’re having such fun with clothes. I want it too; I want to have fun with clothes!’ If that’s what I’ve done, and in my way leave the world a more beautiful place in the way we dress, then I’ve done my job.”

The Art of Dressing with Tziporah Salamon, a two-hour show-and-tell that includes high tea, takes place Sunday from 2 to 4 p.m. at the Palos Verdes Art Center, 5504 W. Crestridge Road, Rancho Palos Verdes. Tickets, $45. Copies of the new book, autographed and personalized, will be available. (310) 541-2479 or go to pvartcenter.org. ER