Finding light in dark times Local art galleries: postponements, and viable alternatives to showing their art by Bondo Wyszpolski Almost all local galleries are closed or closing temporarily, but what do the gallery owners have in mind during the meantime? Receptions have been cancelled, and some exhibitions that have been scheduled may never open. We’ve […]

Small, subtle, and gently magnificent A Portuguese Bend jeweler crafts works of art and beauty by Bondo Wyszpolski The first sketchbook Marianne Hunter shows me dates back to 1977, but she’s been making jewelry for half a century so perhaps there’s an earlier sketchbook or two lying close by. The word “exquisite” is often overused, […]

Tziporah Salamon: All dressed up with somewhere to go 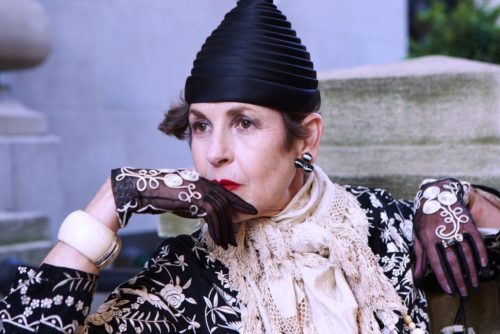 Style Stays, Fashion Fades Tziporah Salamon brings “The Art of Dressing” to the PV Art Center by Bondo Wyszpolski We won’t charge you, but by the time you’re done reading this article you’ll be on your way to becoming the best-dressed person on your block, and maybe in all of the South Bay, who knows. […]