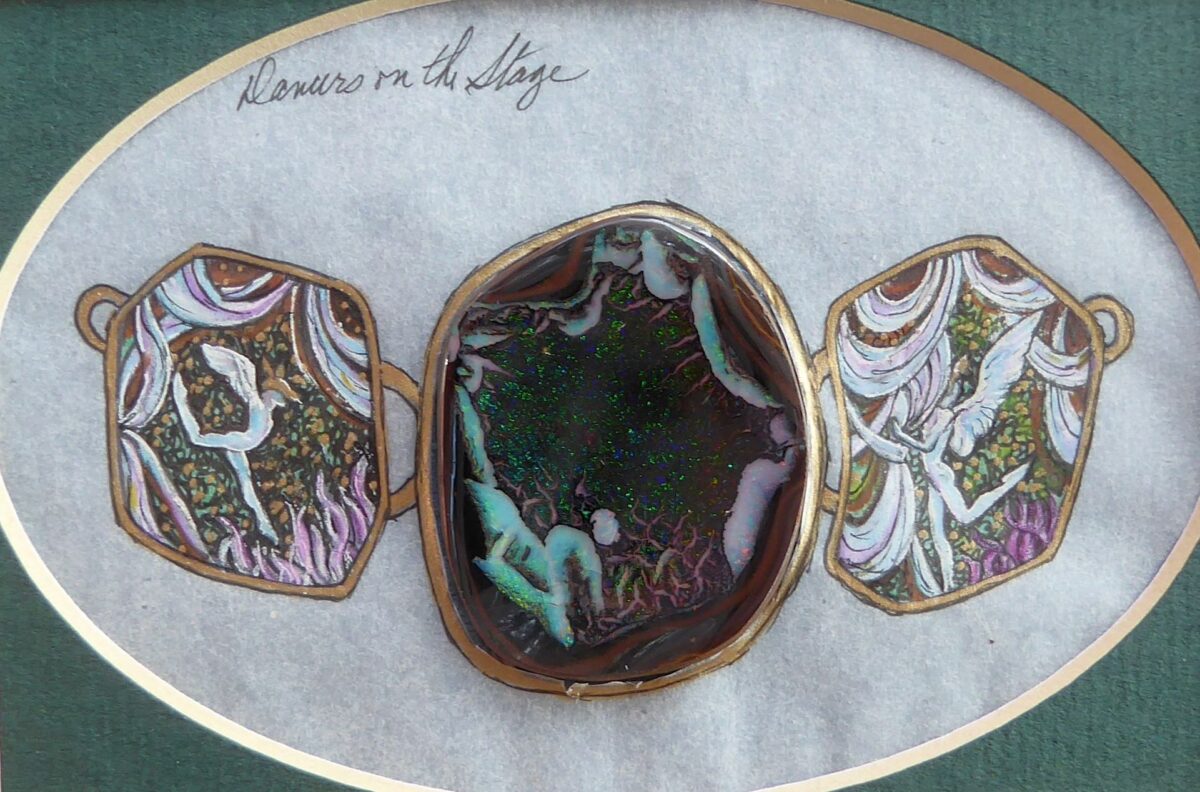 Dancers on the Stage - jewelry designs by Marianne Hunter

Dancers on the Stage – jewelry designs by Marianne Hunter

The first sketchbook Marianne Hunter shows me dates back to 1977, but she’s been making jewelry for half a century so perhaps there’s an earlier sketchbook or two lying close by.
The word “exquisite” is often overused, same with the word “sensibility,” but if there are better ways to describe the work and the person I’m sitting down with I don’t know what they are. 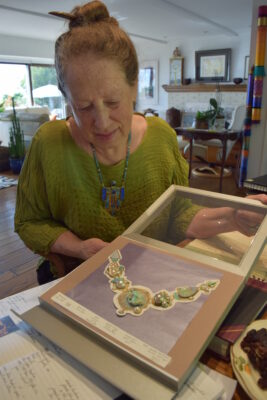 Marianne Hunter displaying the fruits of her craft. Photo

Married to the equally talented and skillful woodcarver William Hunter, Marianne may be described or defined in some circles as an artisan or craftsperson, but what she creates is never mere handiwork. The finished pieces, mostly pendants or brooches, are thoughtfully designed, almost storyboarded in some cases, visual and non-visual poetry with many of them bearing poetic titles.
Elaborate praise goes only so far. The jewelry needs to make an appearance, the preliminary drawings as well. Her influences are many, some not so surprising, such as the Viennese Secessionist and the French-Belgian Symbolist styles of the late 19th and early 20th centuries, along with Art Nouveau and in particular René Lalique.
“Lalique is my jewelry hero,” Marianne says, “because his artwork was so finely wrought and so exquisitely detailed. And also incredibly inventive. He used materials that nobody used before him in fine art jewelry–tortoise shell and bone and wood. Materials that weren’t considered valuable and, therefore, ‘No, this can’t be a part of a fine piece of jewelry.’” But the naysayers were proved wrong, weren’t they?
In her earliest days, Marianne Hunter worked primarily in grisaille, that is to say, in black and white, and her subject matter was curtailed in the realms of fantasy and myth. Her husband, thankfully, nudged her out of that self-confined way of thinking, and into new territory. “So, now I’m all over the map,” Marianne says, “but I feel that’s the reflection of a curious mind.”
It’s a curious mind that we are funneled into by way of her sketches. Items were numbered, what metals were used were dutifully noted. “When you look through these,” Marianne says, “you can start to see different areas of development where I’ve got themes going.”
In the early years she was making about 50 pieces a year. They were small and the smithing was relatively easy. “And then as I went on I came into contact with so many more materials.” More choices, then, requiring more deliberation.
And where does she find her ideas?
“The way I draw is partly whatever it is I’m thinking about at the moment. So that comes into my work. And I’m interested in anthropology and I’m interested in dance and I’m interested in other art forms. I really like other cultures; and I love fantasy, all kinds of fantasy and mythology.” 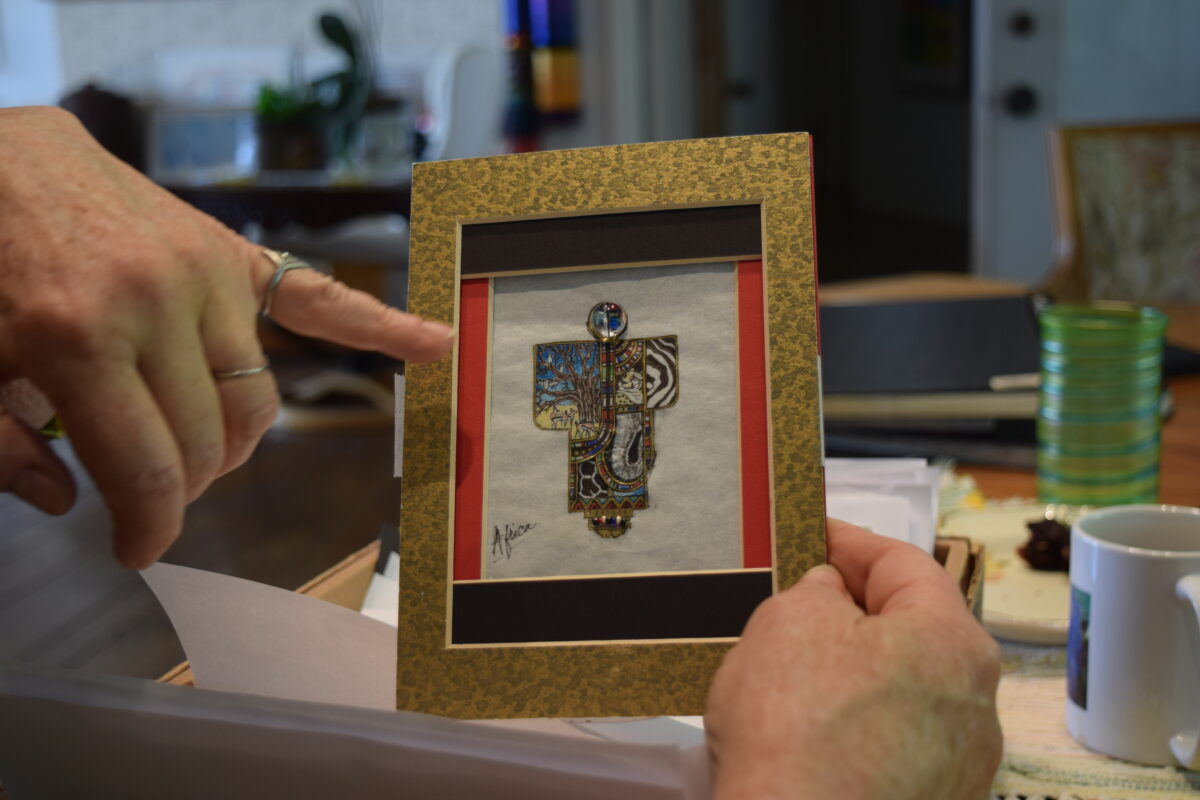 Marianne Hunter shows a preparatory sketch for a piece of jewelry

There are stories with fairy tale themes as well as pendants and brooches with African or Australian undercurrents. One prominent design that occurs in numerous permutations are her Kabuki Kachinas, as she calls them. “They ended up being my signature work. I can tell any kind of story in these figures. I can go anywhere I want with them reflecting how I feel about that. They’re everything from, really, art nouveau to very stylized and modern.”
It took her, Marianne says, 50 years to get to Japan. “And it was everything I imagined and more. Walking into some of the older buildings that had been maintained, or down the street in the older towns, was like walking into a woodcut.” The appeal is understandable. Peter Quennell called Japan “a universe of half-tones and subtle hints.”

They speak, she listens

Sometimes a gem will remind her of something, Marianne says. In that inch or half-inch cloud an idea for a piece may emerge. An opal, for example. “That’s one of the things I’m good at,” she adds, referring to her ability to extrapolate an image or part of a story. One grouped set of stones that she shows me reminds her of photographs taken from the Hubble telescope: “An expansion of galaxies and the beautiful colors in space.”
“And also, by this time, the titles have become poems. I make no claim as to how good the poetry is, but it’s heartfelt. It’s just a longer title; it’s the way I feel about the piece.” And now, because the exactitude of her work has led her to create just 18 pieces a year instead of the previous 50 a year, “I have a lot of emotion left over. So it ends up in the poetry.”
It’s not just the physical work that is taking more of her time, Marianne says. The decisions about the physical work are taking more time as well. 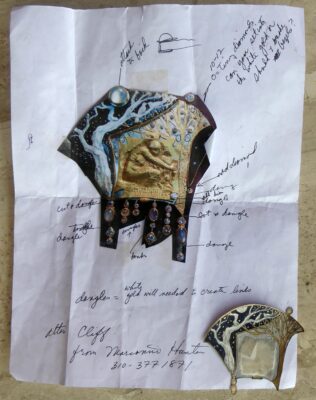 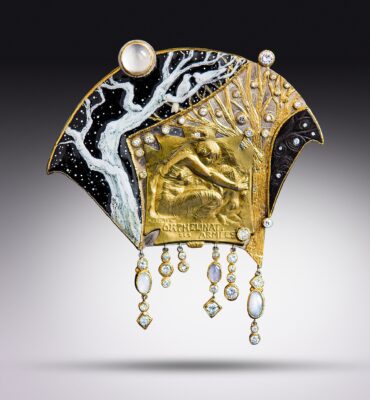 Some of that pre-planning is made by what her trained eye conveys to her brain. She has boxes of different materials, tiny stones and other objects she may have saved for years, even decades, waiting for the right setting or the right context. Like sifting through patterns to see what plays with or against something else. “And I just keep moving them around on the bench until I find the things that [go together].”
She says at one point, as she shows sketches and photographs of recent and past work: “I love these materials. It’s a real indulgence for me to be able to do this.”
In Tucson, each year, sellers gather to display their wares. Booths, tents, every place imaginable. Marianne used to be a regular. But now?
“I don’t have good self-control,” she confesses; and since she already has so much material on hand, in addition to crafting less than 20 pieces annually, “I just get myself in big trouble, so I don’t go to Tucson anymore.”
But some of her favorite dealers make house calls as they pass through California. She’ll patiently look through everything, the high-end stones as well as the less expensive. One just never knows…
Meanwhile, the jewelry-making continues.
“I like doing commissions as long as I know that the person who’s placing it is familiar enough with my work that they know they like it, and they trust me.” That’s the key; she doesn’t want a client who starts telling her how to design something. First she’ll gather all relevant information from them, so that client and artist are on the same page. “And then I do a drawing to scale before I finish the piece so that I get an approval.”
Recently she’s been bidding on and collecting orphan medals made in France during the aftermath of the First World war to raise money for the orphans of the French army. Specifically the one designed by Lalique. There’s something in the somber quality that strikes a chord with Marianne, and with each medal she’ll add a little here, there, to enhance its poignancy.
She shows one, and it’s a real beauty. Quiet, subtle. And we’ll use that word again: exquisite.
“I keep one piece a decade,” she says, “and I’m thinking of keeping that one.”
How do we describe these little works of art? So small, and yet how firmly they resonate through time and space.
Marianne Hunter’s jewelry and sketches will be on display at the Palos Verdes Art Center from March 16 through April 22 in Capturing a Vision: The Portuguese Bend Tradition. PEN