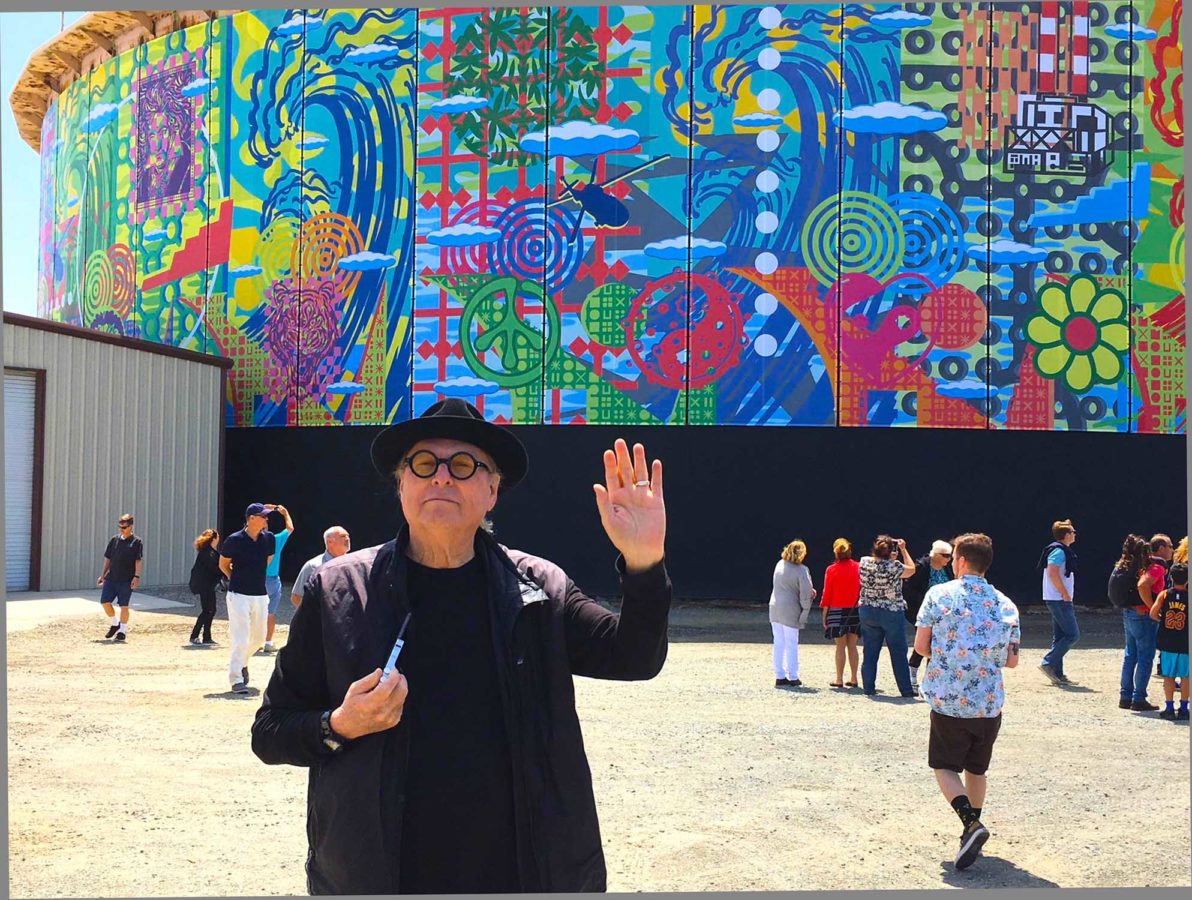 John Van Hamersveld at the unveiling of his 510-foot water tank mural in El Segundo, April 28, 2018. Photo by Sebastian Amespil

Kaleidoscopic grandeur
Peninsula resident John Van Hamersveld’s new whirlwind of a mural unveiled in El Segundo
by Bondo Wyszpolski
There was no way to tie a curtain around it or throw a sheet over it, but Saturday’s “unveiling” of John Van Hamersveld’s 510-foot wraparound mural has transformed a large rusted water tank overlooking the shores of El Segundo into a massive, if not monumental, work of art.
The tank belongs to the L.A. Department of Water and Power and is located on Grand Avenue, at the Scattergood Power Plant. In the eyes of some residents, this paint-peeled behemoth had become an eyesore. One of those people was Jimmy DeSisto, who’d drive by it when taking his kids, Gianna and Enzo, to the beach. About four years ago, he said something to his friend Drew Boyles, who was then an El Segundo council member. As usual, wheels were slow to grind. So let’s skip ahead a few years and visit another part of the South Bay.

A year or two ago word got out that Van Hamersveld was an alumni of El Segundo High School. At the time, Van Hamersveld lived in Lunada Bay, so how come he didn’t attend Palos Verdes High School? Well, until the early 1960s the Peninsula was still rather barren, and in John’s early years, PV High, Rolling Hills High and Miraleste High were still some years away. So, if you were a teenager, sayonara: you were bussed off the hill. One class was sent to Narbonne, and a couple of others to El Segundo. That’s how it it is; Fate always sends us in one direction or another.
During his high school years, Van Hamersveld swam and surfed, and on the new mural it visibly proclaims that this work is dedicated to Hap Jacobs and Dale Velzy. In the early 1950s, the two men went into business to make surfboards under the label of Velzy and Jacobs, and it was Jacobs who made John’s first surfboard.
Van Hamersveld was also a proficient skier, and after high school his nose and toes were pointed in that direction. But then, at 18, a certain mishap on the slopes had him rethinking his plans, and he headed to the Art Center College of Design, which led to him doing illustrative work for surfing magazines, which led to the “Endless Summer” movie poster, before being capped by a memorable stint creating album covers for the likes of The Beatles, The Rolling Stones, and The Jefferson Airplane. Not the sort of thing a professional skier would have had his hands in. And so, John says, as the conversation veers back to the mural, “It’s incredible how it all falls together.” 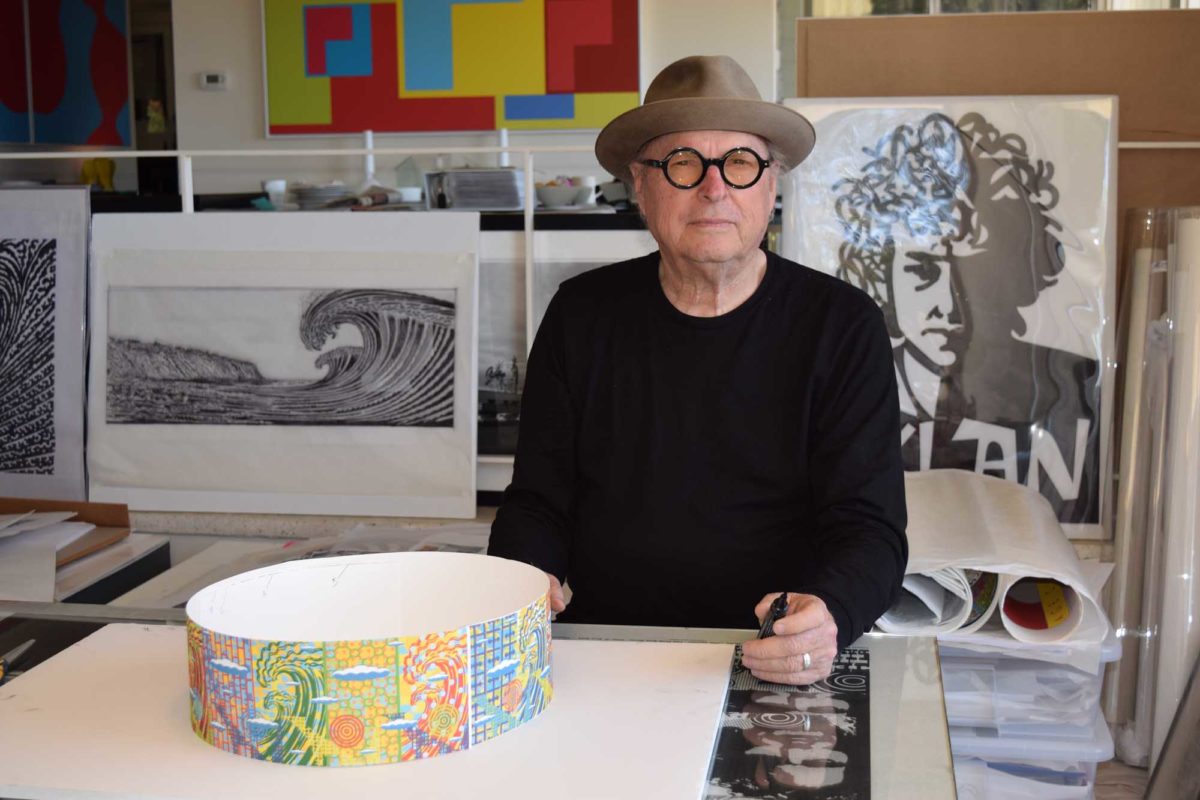 John Van Hamersveld in his studio with the model of his latest mural. Photo by Bondo Wyszpolski

Clothing a megastructure
When El Segundo Mayor Suzanne Fuentes got word of Van Hamersveld having graduated from El Segundo High School, she and an assistant drove up to his home in Rancho Palos Verdes to talk with him about being inducted into the school’s hall of fame. Several months went by, and then, in September of this past year, the event finally took place and John was honored as a commendable alumnus. 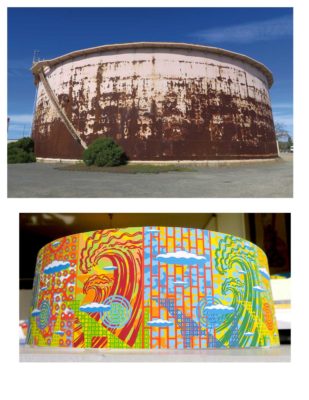 The water tank beforehand, and how Van Hamersveld envisioned his mural around it. Photos by the artist

At the luncheon on that day, he was asked if he’d consider doing a mural for the city. He directed this inquiry to Alida Post, his agent, business manager, and wife. It’s not clear if the people suggesting a mural knew what they wanted, but presumably they’d seen or heard about Van Hamersveld’s other work, including his mural in Hermosa Beach and his installation in downtown Los Angeles. He also created a 360-foot long mural for the 1984 Olympics, here in L.A.
Designs are one thing, logistics for a large-scale project are another. Apparently, to remove what paint remained, or even to paint over it, would have generated some sort of harmful environmental effect, and so the solution was to to wrap the tank in panels, 51 of them, each one 10 feet wide by 32 feet high. Do the multiplication and you’ll see it comes out to 510 feet wide.
Because of the wind factor, which can be severe along the coast, the material is a kind of porous mesh, printed by Spin Imaging on a 14-foot-wide press. Grommets are inserted into the fabric every five inches and placed over vertical rows of nails descending from the top of the tank at 10-foot intervals, then pulled tight and aligned with the adjoining panels. The company TRC was selected to do the nuts and bolts portion of the job that keeps the mural secured.

Surf report
A couple of weeks ago, Van Hamersveld sent me an article on ukiyo-e, or Japanese woodblock prints. Although he didn’t comment on this one way or the other, the mural could be said to resemble a marriage between pop art and woodblock prints. The work is comprised of designs or images in pure colors, without shading, and if there’s a sense of depth it comes from two primary sources, the first being an ubiquitous cloud image in different sizes. For the eye, this sets in motion the idea that what we are looking at is almost three-dimensional. Then we have the layered designs, some overlapping one another, with the lighter images seeming to project forward while the darker images appear to recede.

Detail of the mural. Photo by John Van Hamersveld

That’s accomplished with an understanding of how contrasting colors “pop” when juxtaposed with one another. We look at one design or image, and then our eye is pulled to another design or image, seemingly behind it. Or, as Van Hamersveld says, “It’s all devised to make an illusion rather than a narrative.”
Actually, it does both.
“If you walk around (the tank) you’re seeing these images that I’ve done over the years, so it’s like a social introduction to these cultures that I’ve been a part of.”
A narrative of what you’ve been doing spanning X-amount of years?
“Well, let’s put a number on it,” John replies. “I think it’s like 50 years.”
Okay, a 50-year retrospective embodied on one tank.
But then Van Hamersveld points out one of the most significant aspects of the mural, this being the 15 tall waves in different colors that endlessly chase one another around the tank. If you’re a surfer, he goes on to explain, you’re always thinking about the wind and whether the moon is full or not full and the effect this will have on the tides and the swells as they travel inshore from distances near and far.
“So surfing and the ocean are very mythical,” he continues, “but it’s also cyclical, meaning every year it comes around at the same time, the same place, the same hour.” 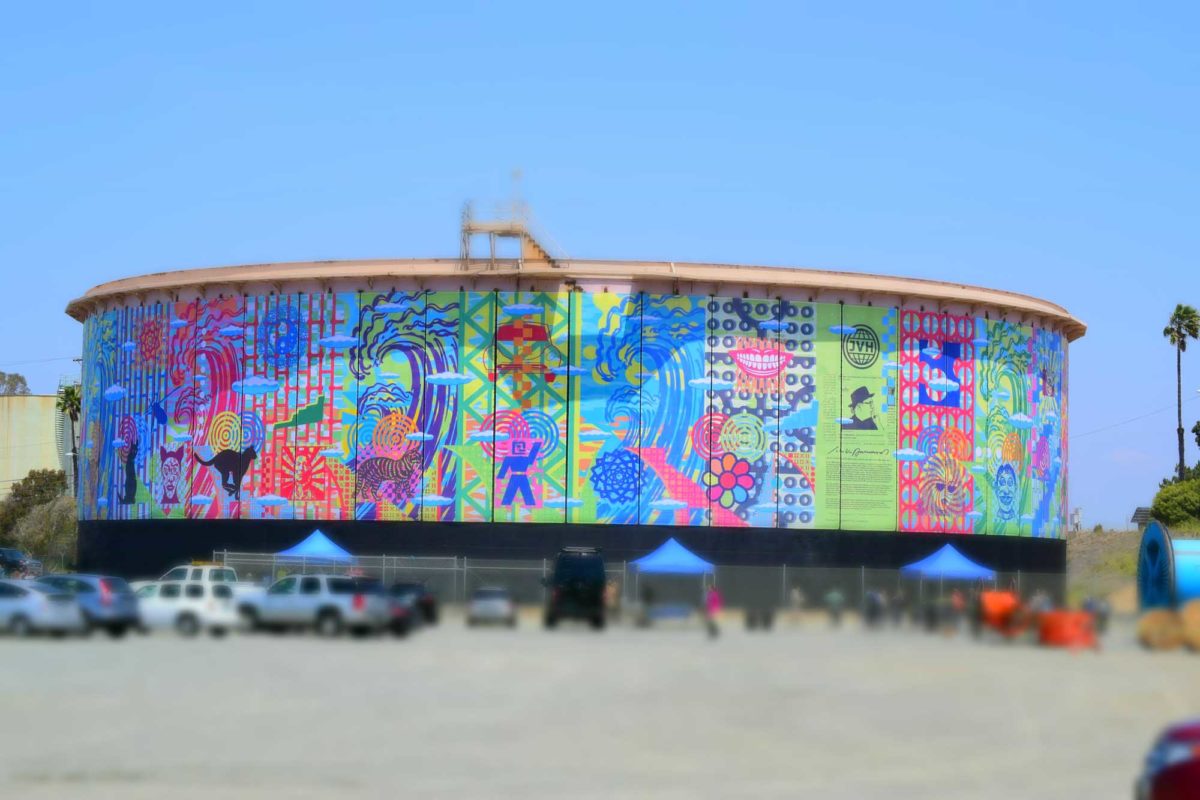 The mural from the south, away from the public eye. Photo by Bondo Wyszpolski

If we put it another way, the circular mural encapsulates this repetitiveness and becomes endless. While the physical circumference of the tank remains at 510 feet, one can argue that in itself the mural has no beginning and no end. It’s one big eternal psychedelic swirl.
Now, maybe you’re wondering what this thing is actually called? When I inquired, John replied: JVH Art Tank. Well, no offense to anyone, but shouldn’t it have a more colorful title, like Poseidon’s Playhouse or Magical Mystery Tank? With the help of his thesaurus, John lightly responded: Imaginary Mind Boggling Water Tank. How it ends up being referred to remains to be seen.

Symbols and sunlight
As for the images that crop up in the mural, they can be associated with many different eras, as noted above. At the unveiling, Van Hamersveld mentioned that the Indian, for example, dates back to 1968 and the Johnny Face to 1970.
People will want to learn more about these “hieroglyphics.” They’ll be pointing to the cat, let’s say, and asking what it means or stands for.
“Right,” John replies. “So the cats are from a story called ‘Indigo Eye’ that I wrote. It’s about an artist who meets a cat that turns into a woman and takes care of him.
The journalist smiles broadly and laughs. Gosh, what fellow wouldn’t want a cat like that?
Other images include the four signs of life, an allusion to the Las Vegas Fremont Street Experience that John created some years ago, as well as portraits of Beethoven, Mozart, and Jimi Hendrix, the latter designs referencing his poster work. If we Google-search Van Hamersveld’s name his images will all but literally jump out of our screen. 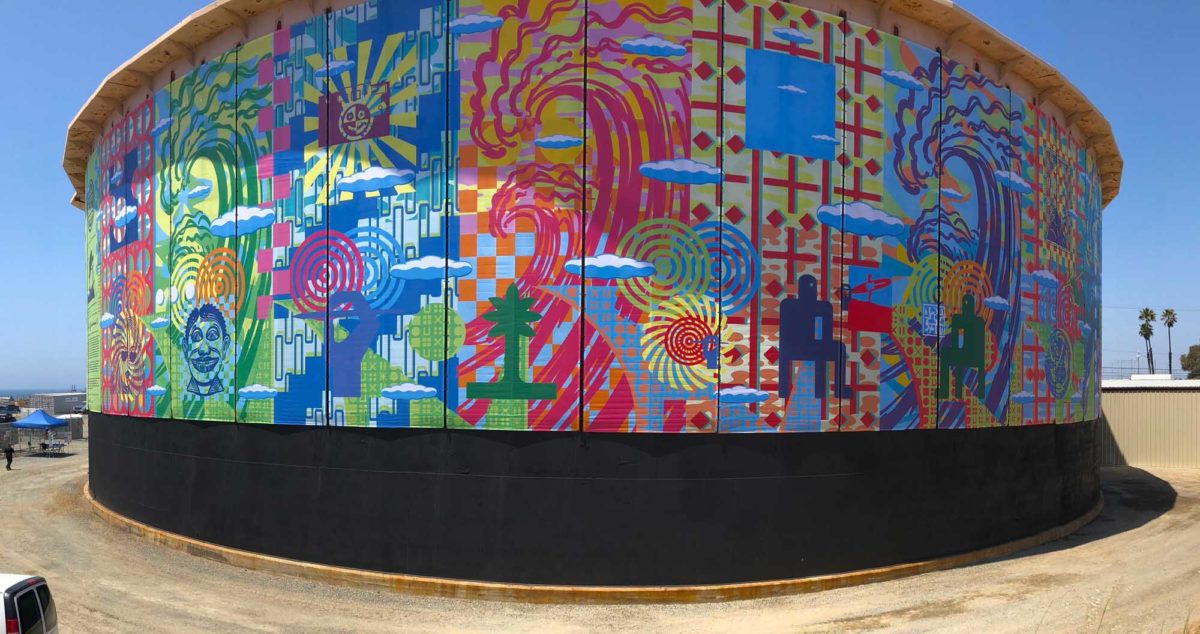 The El Segundo mural in all of its colorful splendor. Photo by John Van Hamersveld

The next question we might ask is this: Is the JVH Art Tank permanent?
At the unveiling, John said something like, “Hopefully the sun won’t terrify it,” but working in tandem with the wind it very likely will. He points out that with some of the architectural designs he’s been involved with (the Fatburger chain, for instance), the California sun has a field day for maybe 10 months out of 12. In some cases, every three years or so “it has to be redone to get the intensity back again.”
Eventually this is bound to be an issue, but in the meantime it’s big and bright and here to be enjoyed. Maybe the city could add a few floodlights so that weary passengers flying into or from the airport at night can have a little thrill. Maybe, too, the site could be open to the public every couple of months, because the mural gains further significance when we can walk around it and see if from close up.
Alida Post, who also spoke about the water tank mural at its unveiling, points out that her husband’s mural adds to the rich history of this artform in L.A., even though most of them have vanished over time. This latest one in El Segundo joins those that John has created in San Pedro and in Hermosa Beach, as well as the frieze that encircles the crown of the Manhattan Beach Art Center. “The South Bay’s been very good to us,” Post says. Need it be added that Van Hamersveld’s work has in turn been very good for the South Bay?
John Van Hamersveld’s water tank mural is located at the Scattergood Power Plant, 720 W. Grand Ave., El Segundo. No public access to the site, but it can be viewed from several angles on or near the street. ER