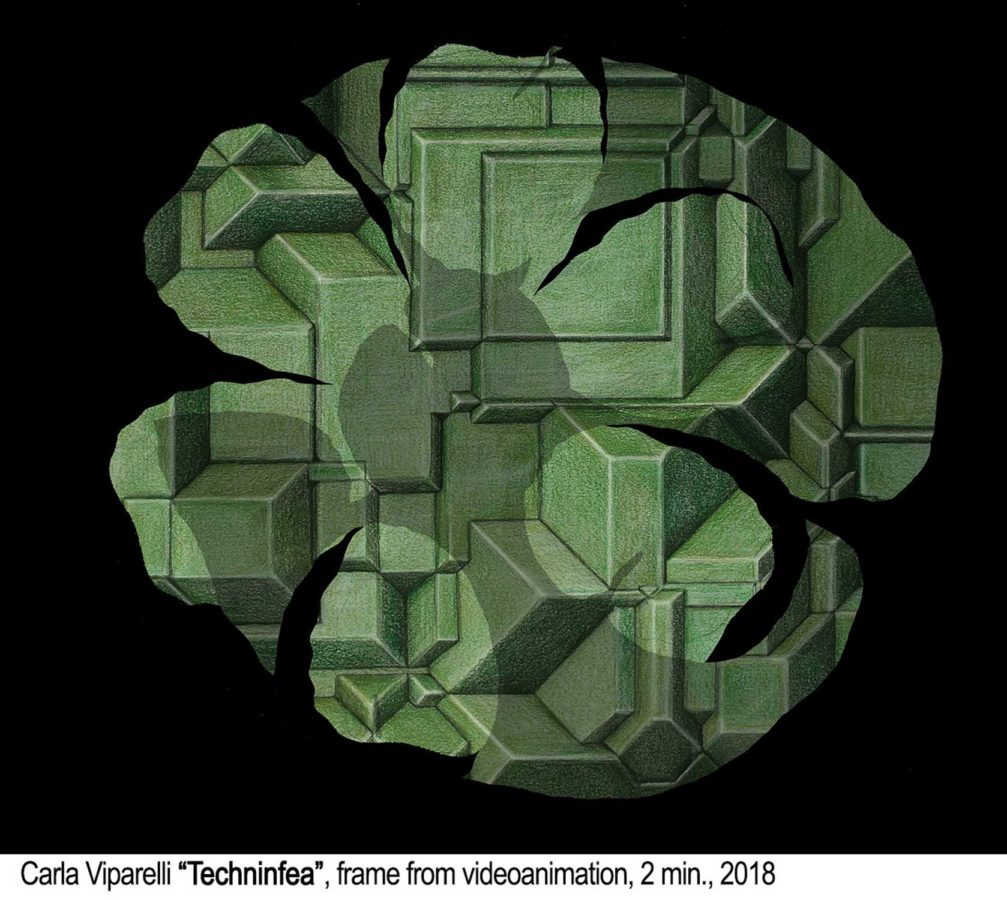 Artistry in motion
“Mimesis,” with painting and video animation by Carla Viparelli, opens in Manhattan Beach

Simply put, most local art venues feature local artists. However, working with the Manhattan Beach Art Center, curator Homeira Goldstein has turned this idea on its head in a big way: Carla Viparelli, whose solo exhibition “Mimesis,” opens this Friday, is from Naples, Italy.
Viparelli has previously shown in Little Tokyo, Culver City, and Lancaster, with one work in the Culver City gallery catching Homeira’s eye. It was an animated video, which Homeira then purchased.
“I’ve seen a lot of video animation,” Homeira says, “but this one was altogether different and innovative and new.”
Viparelli’s videos don’t feature cartoonish characters with lots of color, scene changes, and rapid movement, but have a kind of gravitas. Homeira compares them to microscopic cells, the encounter between sperm and egg is how she phrases it, because there is a gradual converging and interweaving of the visual forms. 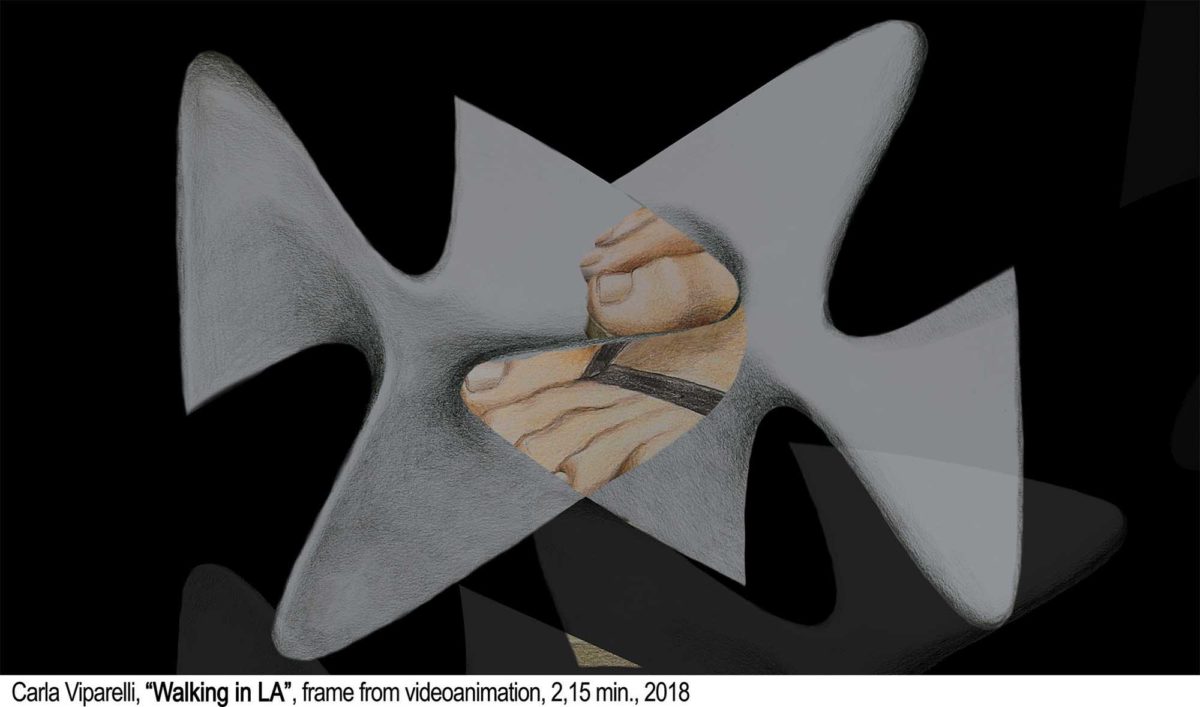 The forms that glide and rotate towards one another and intermingle are compositionally different. One may have strong, clearly defined geometric patterns while the other may resemble a water lily. The effect is somewhat kaleidoscopic, and like a somber dance and perhaps marriage between the architectural and the organic. Two becoming one, before separating.
There are four wall-sized videos in “Mimesis,” each newly created for this show.

Past glories, present time
Viparelli lives in a country saturated by reminders of its artistic glory, especially during the Renaissance era, but the artist herself emerged from an altogether different discipline: She has a degree in philosophy from the university in Naples.
“My work is more philosophic than artistic,” she says, noting that art is best felt or filtered through philosophy and, conversely, “that art is the best way of being a philosopher.”
If we can describe Viparelli’s work as visual philosophy then this would imply that we have to focus and pay attention while immersing ourselves in her work. Each video is on a loop, and they’re about two or three minutes in length. As we watch the forms meet, integrate, and separate again, there’s plenty for us to ponder.
“The show is about the invisible,” the artist says. “Invisibility doesn’t mean that something is invisible in itself, simply that our perception” doesn’t allow us to see it. What appears to our senses is just part of the larger spectrum, similar, perhaps, to our seeing the tip of an iceberg but being cognizant of the fact that so much more of it remains hidden. 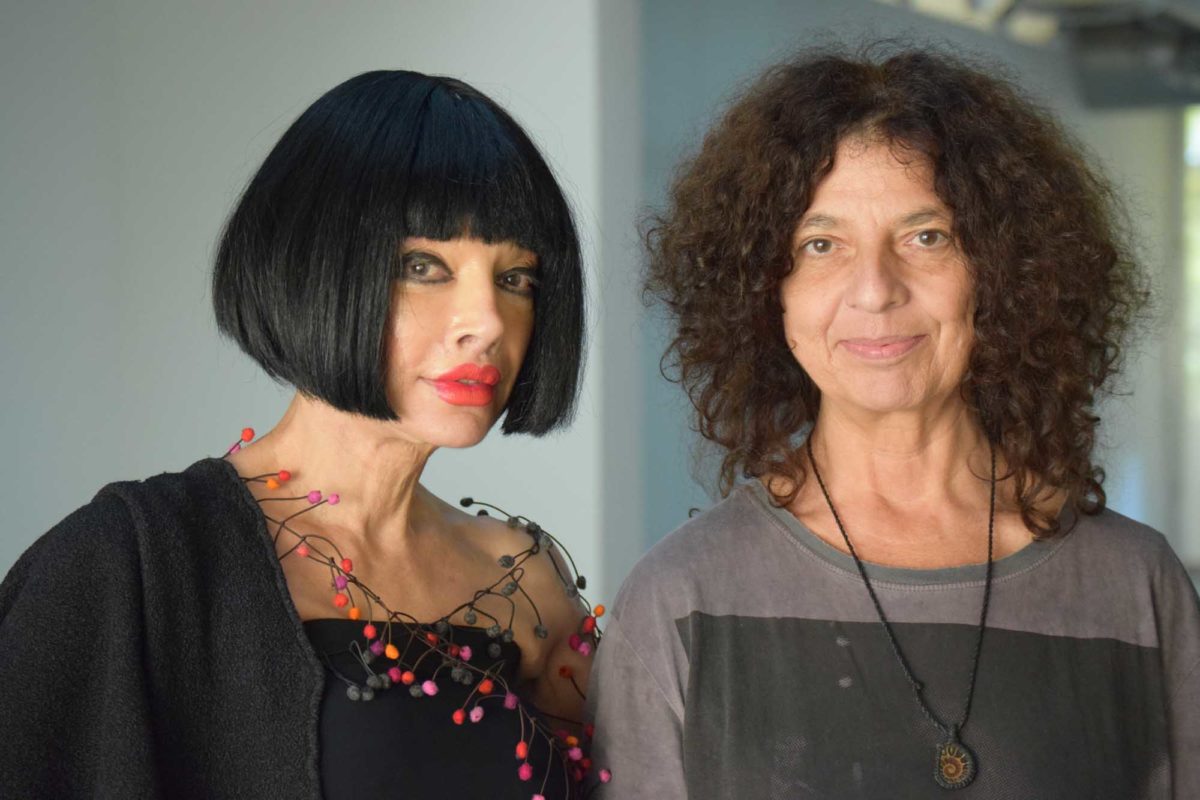 And, as Homeira points out, it’s in the juxtaposition, and the converging, that the impact of the work is greatest. We are invited to contemplate it in ways that differ from painting or sculpture.
Each video also has its own soundtrack or soundscape, confined as much as possible to the vicinity of the specific work.
Viparelli says she began as a figurative painter and notes that contemporary Italian artists have to come to terms with the country’s rich heritage. Some artists may try and reject this heritage altogether, but that’s not the case with Viparelli: “I like to play with the figurative and update it, but not lose it.”

Instilling a human touch
Looking at Viparelli’s animation videos, one may want to know, How does she do it?
The short answer is PhotoShop, but here’s the problem: “It’s not the right software to do animation,” she says, “so I have to build (the film) frame by frame.” Which means that a video of two and a half minutes may take two or three months to complete. However, this also gives Viparelli a certain freedom in the creative process that she might not otherwise have, and also to imbue electronic technology with a degree of human warmth. Despite the medium, the personal touch comes through in the finished work. 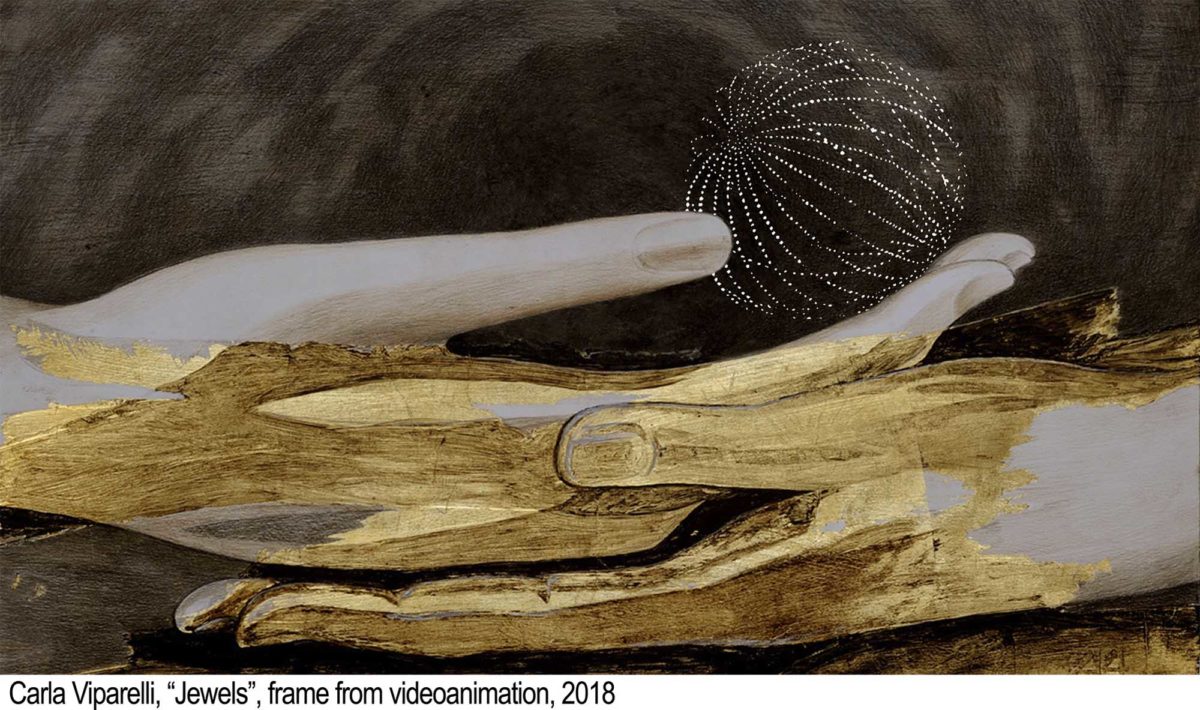 I mentioned earlier that Viparelli has shown in Little Tokyo, but she’s also shown in Tokyo, Japan, as well as elsewhere in Asia and in across northern Europe. But it’s here, in California, that she’s found the the public to be most receptive and, conversely, where she has been most inspired by regional artists. 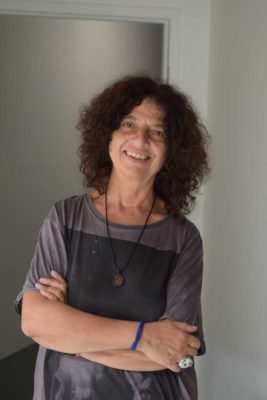 It seems that the art she has encountered in Los Angeles, with its embracing of light and space, is pretty much the opposite of what she grew up with in Naples. And yet because of that, she finds the arts here to be therapeutic.
Immersing herself in L.A.-based art, Viparelli says, “I learned to be lighter, to be less representative, and less didactic. It was a necessary meeting, and I discovered this, not immediately of course, but after a while, inside. It was exactly what I needed, and then adapted.”
The same goes for her experience of Los Angeles, which at first overwhelmed her. She found it “very far from my idea of the world, from my life in the south of Italy, because the scale is so big.” Being in L.A. traffic she thought, “They are crazy; how can they live here?”
But, traffic aside, Viparelli has responded well to the energy and the local vibe. Meeting Homeira has been a gift, she says, and she feels this could be her best exhibition. Whether or not that proves to be the case, it’s a classy show, elegant, and thought-provoking.
Mimesis, featuring the work of Carla Viparelli, opens tomorrow (Friday) with a reception from 6 to 9 p.m. in the Manhattan Beach Art Center, 1560 Manhattan Beach Blvd., Manhattan Beach. Program at 7 p.m. It’s being presented by Homeira Goldstein and Time4Art. Gallery hours, Wednesday through Saturday from 10 a.m. to 9 p.m., and Sunday from 10 a.m. to 5 p.m. Closed Monday, Tuesday, and holidays. Through Dec. 30. Call (310) 802-5450 or go to citymb.info. ER