Vin Scully knocks it out of the park in Redondo Beach 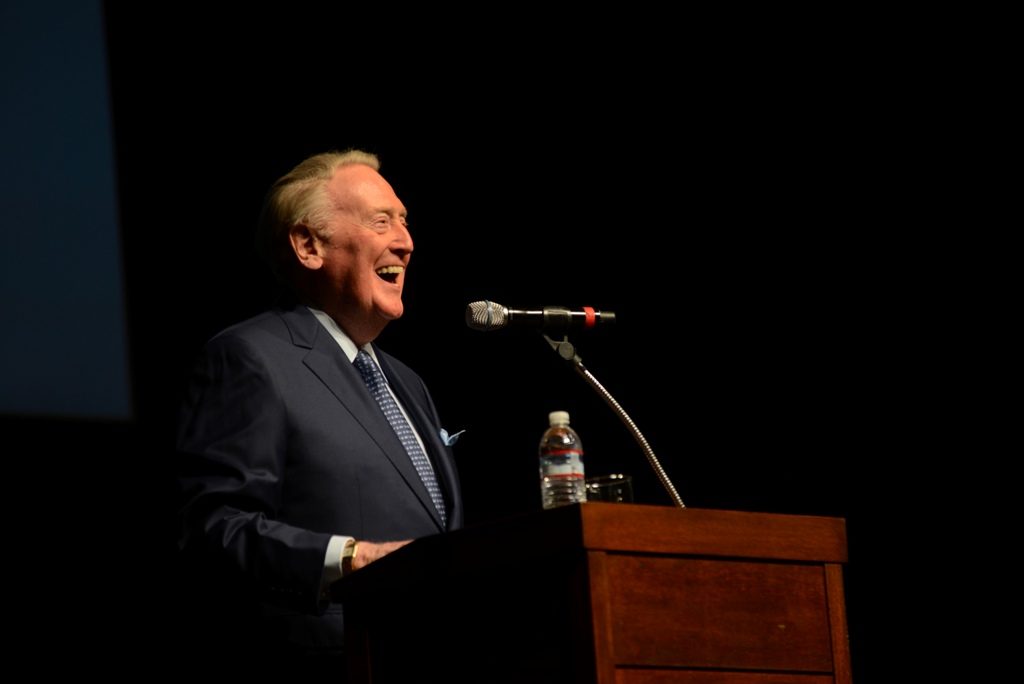 Vin Scully addressing Distinguished Speaker Series subscribers in Redondo Beach in 2017, and having as much fun talkng about baseball as he did when he began six decades earlier Photo by Deidre Davidson Photography

Vin Scully having as much fun talkng about baseball as he did when he began six decades ago. Photo by Deidred Davidson Photography

When Vin Scully was a young boy living in a New York City walk-up, he listened to whatever sports game was being broadcast.

‘I would get a pillow and I would crawl under the radio, so that the loudspeaker and the roar of the crowd would wash all over me and I would just get goose bumps like you can’t believe. I knew that of all the things in this world that I wanted, I wanted to be that fella saying, whatever, home run, or touchdown. It just really got to me.”

“That’s why, if you’ve ever heard me announce a game, you’ll notice that when the crowd roars, I stay quiet. I walk to the back of the booth and remember what it was like listening to games as a young boy,” Scully told Distinguished Speaker subscribers during his talk last Wednesday at the Redondo Beach Performing Arts Center.

Whatever the reason for Scully retiring last year, at age 89, after 67 seasons as the “Voice of the Dodgers,” it wasn’t for a loss of enthusiasm for baseball, nor for fans losing their enthusiasm for Scully. Nor for lack of energy.

Scully talked baseball for nearly two hours without pause before stopping because, he said, “I can see the audience has had enough.” That was the only false note of the evening. 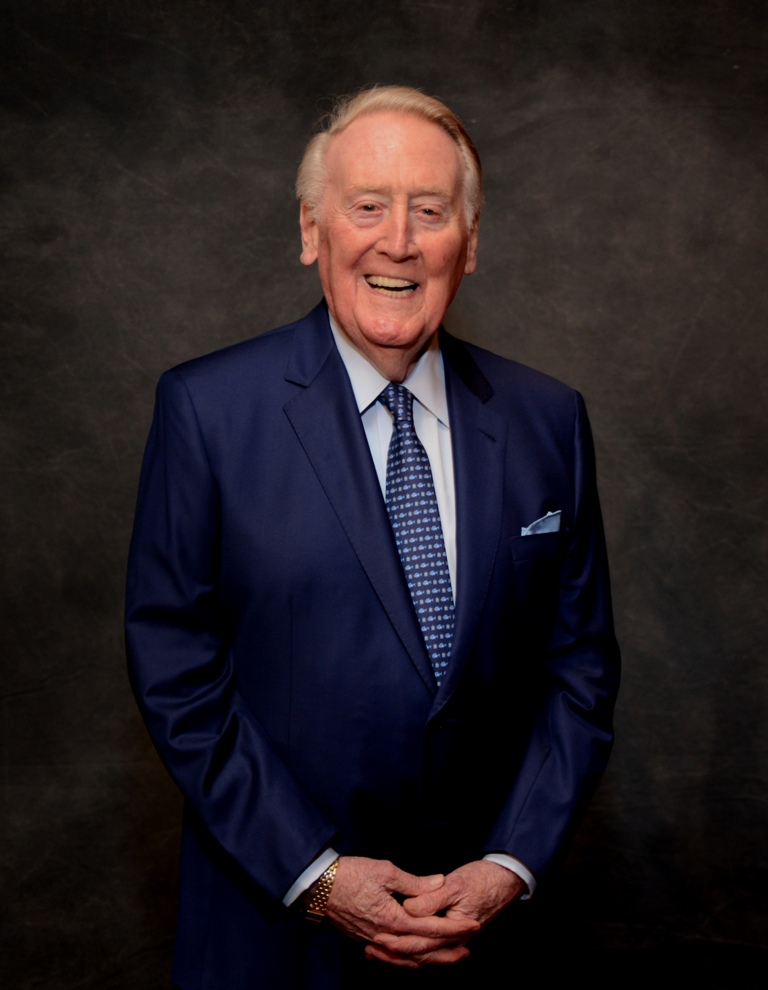 His best stories were about home runs.

“The home run electrifies everyone. But they’re all a little different. We always think of the hitter, but rarely the pitcher,” he said.

Scully made the story about Giants Bobby Thomson’s “shot heard ‘round the world” about the Dodger pitcher Ralph Branca, who threw the home run pitch.

“The Dodgers were 13-1/2 games ahead of the Giants in August 1951 and Brooklyn was already celebrating their trip to the World Series. Come September, they were tied with the Giants. The pennant was to be decided by the final game of a three-game playoff. The Dodgers were leading 4-1 going into the 9th. But the Giants were fighting back and Ralph Branca, the Dodgers’ best pitcher was called in to retire the side.

“Ralph was to be married a few days later. His fiancee Ann was sitting below my booth, by the Dodger dugout. The first pitch was a fastball strike. The second pitch was fastball home run.

“I knew Ann and watched her when the ball went into the stands. She opened her purse, took out a handkerchief and brought it up to her face. Her shoulders were shaking.”

The game was at the Polo Grounds, the Giants’ home field.

“I walked the 460 feet from home plate to the clubhouse by the outfield fence and all I could hear was the Giants going crazy. I opened the door to the visitors’ clubhouse and there wasn’t a sound. Ralph was spread eagle, face down on the floor. I had to step over his right arm. Pee Wee Reese and Jackie Robinson were sitting with their heads down. I pulled up a chair next to them.

“It was a memorable day. But the reason for my story is because it’s about courage. Branca was a New Yorker. He went to New York University. At every charitable event in the city that spring Bobby Thompson would be honored and Ralph would be invited to attend. He always showed up and he never complained. That was 1951.

“In 1996, the Wall Street Journal broke the story that the Giants had cheated. They had binoculars in the clubhouse to watch the catcher’s signals. A buzzer in the office rang in the bullpen. The catcher in the bullpen would signal the pitch to the batter with a towel.

“At no time, even after it came out in the papers, did Branca ever say the Giants cheated. He carried his cross with as much grace as anyone I ever met. That was the most courageous home run I ever saw.”

“The crowd’s roar was incredible. I shut up. I went to the back of the booth. Then it hit me. We were in Atlanta, Georgia. The crowd was saluting a black man for breaking the record of the all-time icon Babe Ruth. I’m looking at the greatest home run ever. I felt fortunate to be there.”

Scully described the third home run he talked about as “my great contribution to the Dodgers.”

It came in the ninth inning of Game 1 of the 1988 World Series against Oakland.

“For some reason, I had this idea. During a commercial I told the assistant director to follow me. Usually he’s telling me what to do.

“When we came out of the commercial, I said to the fans, ‘If you’re here tonight, and look in the Dodger dugout, you’ll see there’s no Kirk Gibson in the dugout. Obviously he’s not playing tonight.’ The camera panned the dugout. I had no idea where Gibson was.

“He was in the trainer’s room with ice packs on each leg.

“When I said, ‘Obviously, he can’t play,’ Kirk said, ‘Fertilizer you Scully,’ and told the bat boy to tell Tommy I’m coming down.

“That may be the only time I ever said a prayer for a player. I said ‘Lord, he’s played so hard and so well through his injuries, lifting his team on his shoulders. Just don’t let him strike out.’

“He hit some squirrely foul balls. Had they stayed fair, he’d have been thrown out. He couldn’t run.”

With two out, the count 3-2 and the tying run on second base, the left batting Gibson swung for a pitch on the outside edge of the plate.

Only after the pandemonium receded did Scully speak.

“In a year that has been so improbable, the impossible has happened,” he memorably declared.

“It was one of the greatest home runs in Dodgers history,” he told his Distinguished Speakers’ audience. “And all because I got Kirk’s fanny off the training table.”

He and the school’s best ball player Larry Miggins were talking in the back row of class when Miggins asked Scully what he would like to do for the rest of his life.

“I said I know the odds are against it, but I’d love to be a sports announcer.

“Larry said, ‘That’s a long shot. But talk about a long shot, I’d like to be a Major League baseball player.

“Four years later the St. Louis Cardinals come to Brooklyn and Larry was in the starting lineup. In those days, I filled in for Red Barber when the ‘eternal tide’ [bathroom break] called him from the booth.

Upon Barber’s death in 1992, Scully told the New York Times, Barber was “the consummate reporter,” and “perhaps the most literate sports announcer I ever met…. He had a profound influence on my life and is a major reason for any success that I might have had in this business.”

With Barber on a bathroom break, Scully took the microphone.

“He hit home run. I had trouble calling it because as he was running the bases all those high school memories came flooding back.”

“If there are any young players here to night, I want you to not only dream, but dream high

and don’t let go of that dream. You never know. It paid off that day in Brooklyn for Scully and Larry Miggins.”

Captain Scott Kelly, the only American to have spent a year in space, from March 2015 to March 2016, will address Distinguished Speaker Series subscribers on Monday, May 8, at 8 p.m. For more information visit SpeakersLA.com. ER