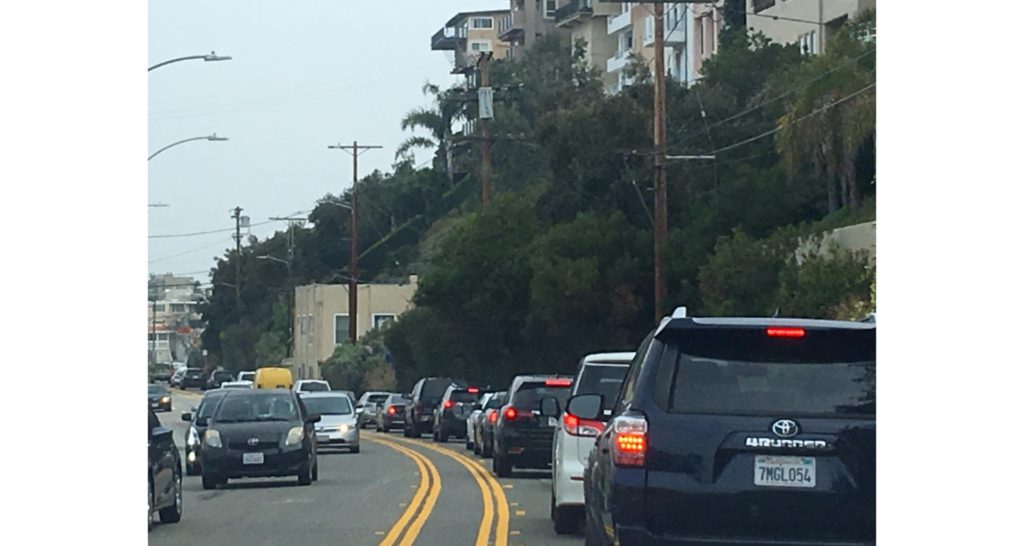 On the Tuesday after Memorial Day weekend, Pat Mendelson arrived home from work later than usual. His wife, Karla, knew immediately something was wrong by the mournful look on his face.

“They closed lanes on Vista Del Mar,” he replied.

Mendelson has commuted for 20 years to Colorado Plaza in Santa Monica. His commute was already among the slowest 16 mile drives on Earth —  it had steadily creeped up over the years to 45 minutes heading north in the morning and 90 minutes returning in the early evening.

The look on Mendelson’s face was the realization that hours of his family life in Manhattan Beach had just been taken from him. Now he was looking at spending more than four hours a day going to work and back.

“I love my job, but I dread going to work,” Mendelson said. “It just doesn’t seem possible that they could do something this crazy.”

The Los Angeles Department of Transportation had closed two of the four lanes on Vista Del Mar, one going south and one going north, which had long been a key commuter route for Manhattan Beach and other South Bay residents heading north. The road’s reconfiguration, which also entailed moving all parking along Vista Del Mar to the west side of the street, was as an extension of District 11 Councilman Mike Bonin’s “Safe Streets for Playa Del Rey” plan —  itself a part of Mayor Eric Garcetti’s Mobility 2035 and VisionZero plan —  intended to end pedestrian traffic fatalities along the street.

Little advance warning had been given to commuters. The Vista Del Mar part of the plan was enacted as an emergency measure, putative in response to the death of a 16 year old girl who’d been hit crossing the street in 2015.

“On Monday, crews will begin working on Vista Del Mar, which has been the scene of a series of horrible collisions, with pedestrians being killed by speeding cars,” Bonin wrote. “The city will restripe the street, moving all of the parking to the west side of the street, creating U-turn pockets, and narrowing the road to one lane in each direction. This will make the street safer, create more parking inventory, reduce speeding, and curb the use of Playa del Rey streets as a short-cut from the South Bay to points north.”

The problem was many South Bay residents don’t just look at Vista Del Mar as a shortcut, but as the only remotely efficient way to go north. The 405 Freeway and Pacific Coast Highway are less direct routes to people who work in coastal communities to the north, and those routes are already jammed during peak rush hours. The route from Highland Avenue in Manhattan Beach to Vista Del Mar and then to Culver and Jefferson boulevards had become a key corridor for South Bay commuters.

These numbers are consistent with the L.A. Department of Transporation’s counts a few miles further along Vista Del Mar, at it’s intersection with Imperial Highway. According to LADOT traffic engineer Eric Hou, average traffic at that intersection is 24,265  vehicles per day in 2016, including 2,200 per hour at peak times.

Karla Mendelson, who formerly drove the same commute as her husband, discovered a Facebook page, Keep Vista Del Mar Open, and through it found other residents throughout the South Bay, including all three Beach Cities, Westchester, and Playa Del Rey, who were organizing oppostion to the lane closures. A Vista Del Mar resident, Susanne Madden, had started a Change.org petetion that had accrued 3,600 signatures. More than 800 people signed up on the Facebook page, and core group of 30 people gathered to organize what they called “the resistance” effort.

And so a week ago Monday, Mendelson found herself, as part of the Keep Vista Del Mar Open movement, standing on the corner of Nicholson Street and Culver Boulevard —  right after Vista Del Mar turns into Culver —  passing out flyers to commuters.

“It really wasn’t something that was on my bucket list, but I did it,” Mendelson said.

“Keep Vista Del Mar Open are for safer streets,” she added. “We are for bike paths. But we’re also for sensible solutions that keep traffic moving. There were so many options that were never even considered, agencies and officials that were never contacted. And of course, there was no regard for the people who count on these roads to get them to their jobs and schools.”

A GoFundMe page was set up on Tuesday of this week and overnight had raised almost $7,000 of its $25,000, money intended, in part, to launch a lawsuit against the City of Los Angeles and obtain a court order to reopen the closed lanes. At issues is the means with which the city was able to embark on the road changes without a California Environmental Quality Act (CEQA) impact report contemplating what the changes would do the surrounding areas, both traffic-wise and environmentally.

Ed McPherson, an attorney and Manhattan Beach resident who has commuted via Vista Del Mar to his office in Century City for 34 years, is helping the activist group find legal representation. McPherson noted the city declared the street an an emergency situation not after the fatality that occurred in 2015 but after the $9.5 million settlement that was reached with the family of the girl who died, Naomi Larsen.

“So which was the emergency, the fatality, or the settlement?” McPherson asked.

The complaint Larsen family filed focused on the lack of a crosswalk and street lights, McPherson said.

“Nothing in the complaint said, ‘We need parking only along the west [side of the street] and we need to take out all of these lanes.’ Nobody said she was struck because of those lanes,” McPherson said. “The girl that got struck got struck after midnight, while crossing the road illegally to get to a car that was parked illegally.”

“This plan was not well thought out,” said Manhattan Beach Councilman Richard Montgomery. “There was no notice. We are, after the fact, trying to find solutions that help people get to Culver City and beyond from the South Bay. And the safety issues —  well, we are seeing safety issues now, with only one lane.”

“[The accident] happened in the wee hours, in the early morning,” Montgomery said. “It had nothing to do with commuter traffic.” 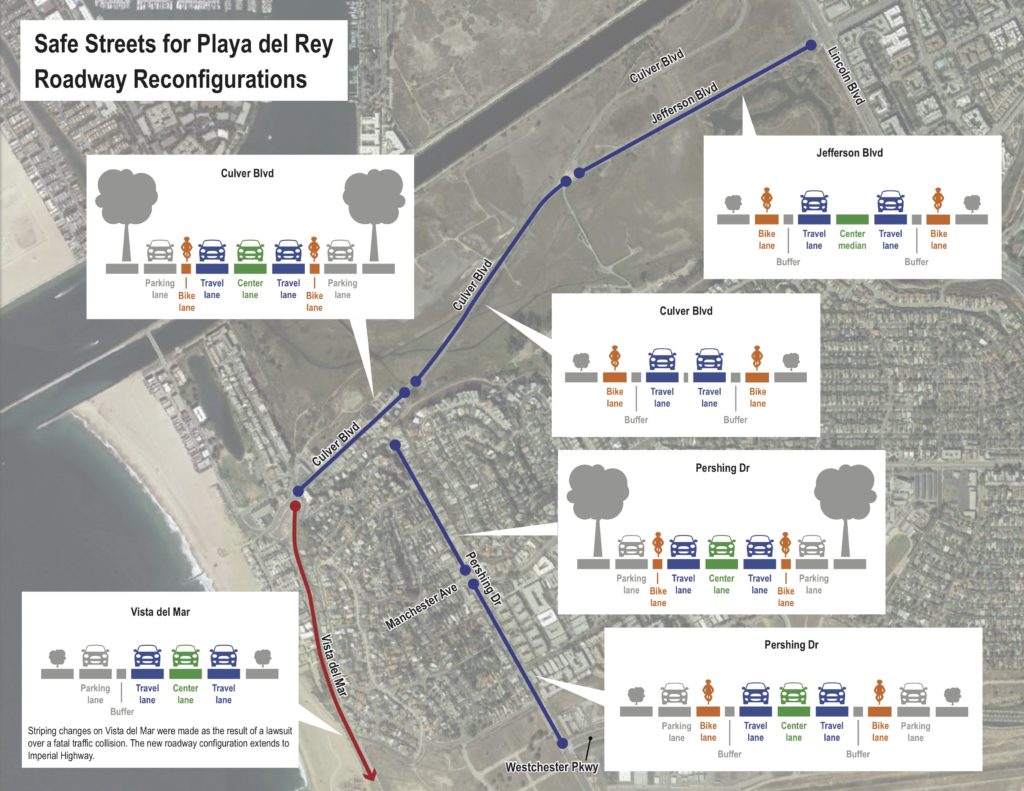 “Crosswalks would not have made enough of a safety improvement because pedestrians would still have to cross four lanes of traffic,” Hasan said. “There was a desire to slow down speeding traffic during non-peak hours and the lane reductions aim to do that.”

Mendelson said that everyone agrees ending traffic fatalities is a laudable goal.

“But if we took away roads every time someone got killed or injured, we’d have no roads at all,” she said.

Dean Francois, the founder of Friends of the South Bay Bike Path, said he’d worked on “road diet” plans along the Esplanade and on Grant Avenue in Redondo Beach. Both were successful, he said, but neither was a main arterial such as Vista Del Mar.

“I’m in favor of road diets, but this project will just give road diets a bad name,” Francois said. “It doesn’t work on such a heavily travelled street like this. It’s just not the way to do it.”

LA Department of Transportation officials believe the congestion will lessen with time.

“It is expected that congestion will decrease over time, as people find alternative routes,” said Hou, of LADOT,  “but most importantly, when DOT re-configures the existing signal timing to accommodate the new configuration.”

Mendelson thinks that if the lane closures remain the South Bay’s economy will be negatively impacted.

“If people can’t get to and from jobs, all of a sudden the South Bay is a less desirable place to live,” she said. “We are going to take a hit on property values and of course our quality of life is impacted.”

She said years back she and her husband actually tried commuting by bike, but the path was often sandy and traffic in the Marina Del Rey portion was dangerous to navigate. Likewise, mass transit options thus far are limited. Many will need to use the 405 freeway and PCH as an alternative route.

“People here live and work on the western edge,” she said. “We stay on the Bay. It doesn’t make sense to go three miles east on a clogged road to get to a clogged freeway going northeast then take a clogged 10 [freeway] back to Santa Monica or Marina Del Rey. This is a really poorly thought out and poorly executed plan.”

Activists suggested a few solutions they thought would work better, such as working with the county to expand beach parking and possibly offer it free while eliminating all street parking along Vista Del Mar. McPherson said he had, ironically, been contemplating the need for expanding the street to three lanes each way just prior to the lane reduction. Montgomery thinks reducing the street by one lane, overall, and having two lanes open going north in the morning and then switching so two lanes are open going south in the evening might be a better version of a road diet.

Bonin and his staff did not return calls and emails for this article. He appeared at a town hall event at Loyola Marymount June 4 and spoke with activists. “He appears to have pretty much dug in,” said Madden, the Marina Del Rey activist who launched the Change.org petition.

On June 6 another town hall meeting was held at the Westchester Municipal Community Center. Bonin sent staff members to address concerns of the public.

“Hundreds of people turned out and Mike Bonin wasn’t there,” Madden said. “It’s the biggest thing he’s doing to this area, and he didn’t have the courage to show up.”

Manhattan Beach Mayor David Lesser, who is conducting a town hall meeting this Saturday regarding the lane closures, said he spoke with Bonin last week and was told that the plan would be reassessed at one month, three months, six months, and a year. Lesser was left with concerns as to how South Bay residents and officials could provide input.

“This remains an ongoing concern and people really need to rise up within the district,” he said.

Lesser is also helping organize a meeting at which Manhattan Beach and other regional officials will offer input to LADOT officials on June 20.

“Between the mayor’s plan, this multi-pronged reginional approach, on one hand, and South Bay resident’s resistance on the other —  whatever returns Vista Del Mar to the state it was in, we’ll be happy with,” Montgomery said.

A Community Conversation meeting hosted by Mayor David Lesser will take place June 17 from 10 a.m. to noon at the police/fire conference room at 400 15th St.