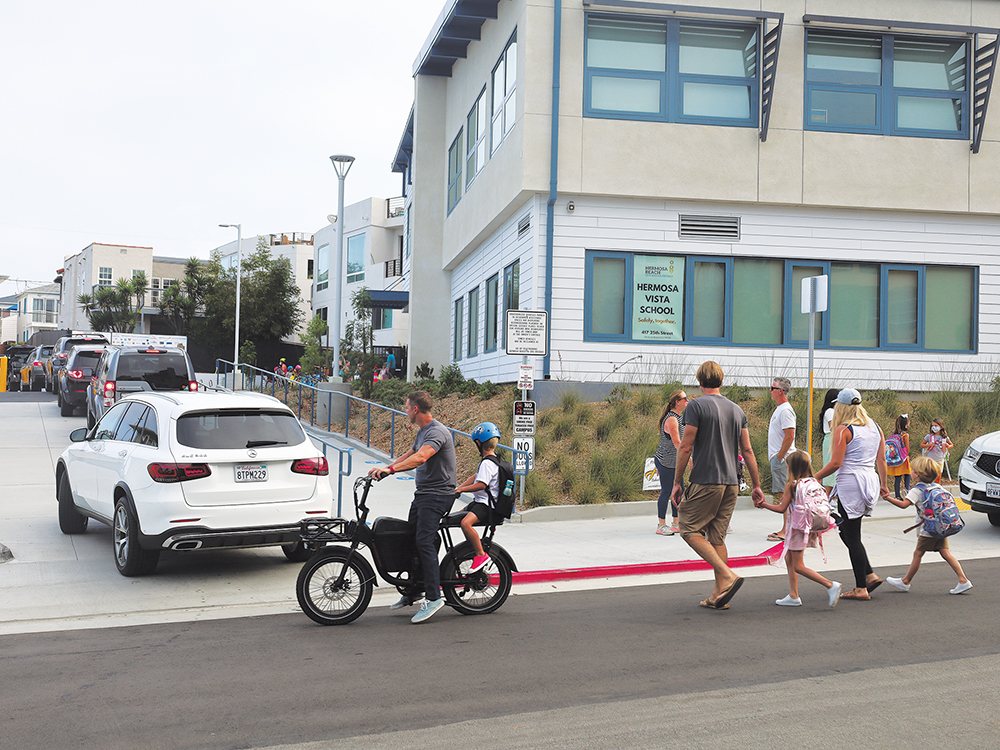 Getting students efficiently and safely to and from the newly modernized Hermosa Vista School (formerly North School) has been the subject of formal studies and formation of a plan – which has now been put into action.

With mixed results during the 25th Street school session’s first few days, according to some residents impacted by the irregular traffic flow.

John Williams lives across from school.

“It’s like Los Angeles International Airport,” he told a reporter. “Drop offs are easy. People pull up, drop off child and leave. Pickups are the problem. People pull up and wait for their kid to find them. Pick-up traffic on Friday was backed up from 25th Street to 22nd Street.”

Neighbor Scott Davey, said he believes the program needs more time to develop. Davey is a member of the Neighborhood Transportation Management Program (NTMP), which contributed $20,000 toward a plan that showed how students could be dropped off on campus, rather than on the streets surrounding the school.

“It’s only been a few days,” he said. “Let’s collect the data and then go from there.”

“We have only had two days of school,” he said earlier on Tuesday. “We are working with our families to train them to use the drop-off/pick-up as they did successfully last year. That process will likely take a couple of weeks like it did last year.”

Doug Krauss, Hermosa Beach’s Environmental Programs Manager, said part of the plan incorporates “signage added by the city and other improvements – along with its ongoing commitment to programs, such as the Safe Routes to School program – to ensure students are safe and to minimize traffic impacts on surrounding residential streets.”

Krauss noted that there is “more traffic at the start of the school year,” which makes it “difficult to assess how this plan is working. But the Neighborhood Traffic Management Plan is adaptable.”

Complications in the plan have long been anticipated. The program was designed to smooth traffic during school hours, according to its authors, but peak-hour congestion at delivery and pickup points was described as “unavoidable,” and parking and roadway hazards, it was predicted by planners, “[will] pose significant impacts,” according to a 2020 staff report to the Hermosa Beach City Council.

Elements of the plan include “staggered” start and finish times for students in different grades. Many parents have been observed parking off-campus and walking their children to the school.

Brenda Levy, who lives near Prospect Avenue in the south end of Hermosa, drove her twins Travis and Riley to Hermosa Valley Park, then parked and walked her sons through the park to the school.

“I wanted to avoid driving through the neighborhood around the school,” she said. ER