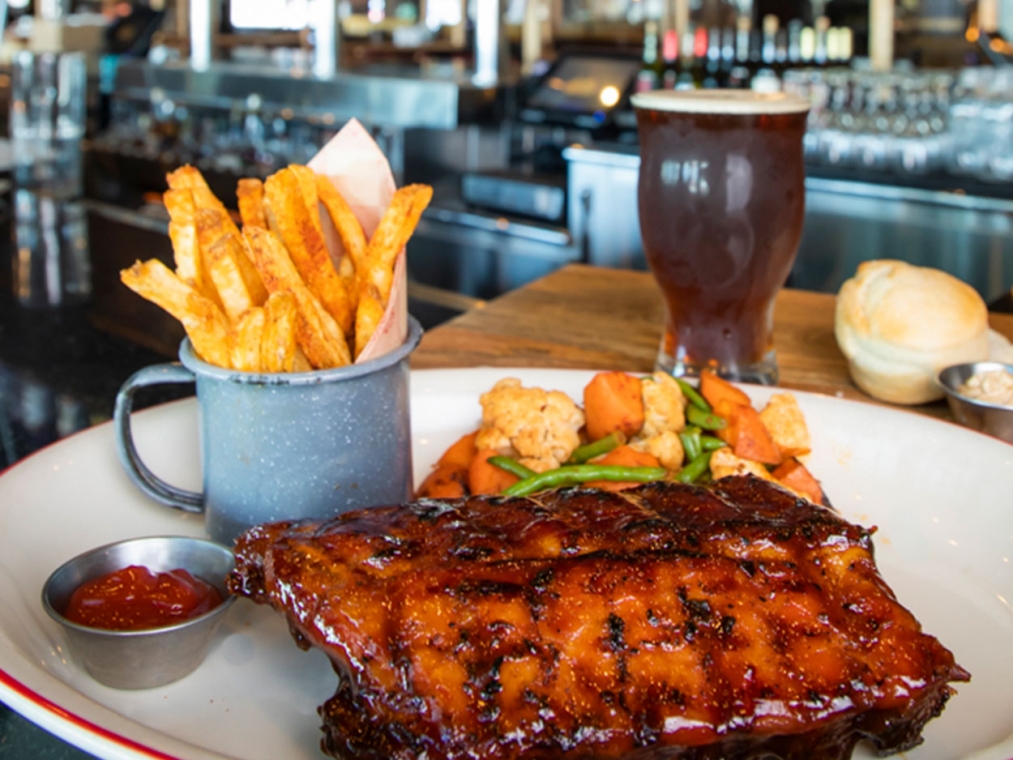 Lucille’s St. Louis ribs are meatier than the baby backs, with a sauce that has a fine balance of sweetness and spice. Photo courtesy of Lucille’s Smokehouse Barbecue

I have expat friends who live in New Zealand and stay with me when they visit family here. Their first actions on arrival follow a pattern. On the way from the airport, even before dropping their luggage, we stop for Mexican food, and within the next two days we go out for barbecue. These are the flavors they miss that are unattainable in the antipodes – Mexican restaurants there are a pale shadow of the real thing, and as for barbecue, in NZ, that usually means sausages and kebabs seared in a cut-down oil drum. It’s not bad as grilled meats go, but doesn’t compare with the slow-smoked Southern style in all its glory. If you ask any American living overseas what they miss, that’s likely to be the one of the first things they mention.

My Kiwi friends couldn’t visit for two years due to Covid, so when they showed up last week, they had a powerful craving for those unavailable foods. They got their Mexican fix on arrival, and when it came to barbecue day, I took them to Lucille’s. It’s a favorite of theirs not only for its variety of styles of barbecue, but for sides that go way beyond the usual offerings of beans, greens, and pasty white bread.

I drove on autopilot to their old location – Lucille’s moved about an eighth of a mile south of their original digs. The new space is a bit larger and has three distinct areas – a lively bar, a main dining room with an interesting mix of modern style and kitschy decorations, and an outdoor patio that lacks the Southern-fried décor of the other spaces, but is much quieter. We gravitated to the patio because we like to converse at normal levels, and settled in with menus.

The seasonal menu had several chicken specialties. We started with smoked and fried wings along with deviled eggs topped with deep fried chicken skin instead of the usual bacon. I was impressed that someone could think of something less healthy than bacon to top cholesterol-laden eggs with, but if anybody could, it would be Southerners. The one thing that all regional variations of Southern food have in common is the juxtaposition of sweetness, richness, and spice. When done right it’s downright addictive. 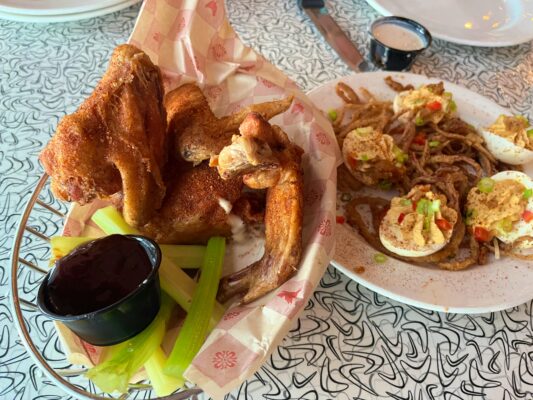 Unfortunately, the first things to arrive at our table did not hit that balance. The biscuits were light and fluffy but topped by a huge amount of sugar, more like a Mexican sweetbread than a traditional biscuit. They were served with a honey butter that was more honey than butter. The biscuits aren’t bad if you scrape off the top and leave the overwhelmingly sweet butter in its cup, but there was a pile of sugar and crumbs untouched on our plate.

The deviled eggs arrived on a bed of fried, shredded onion topped with a modest amount of chicken skin, accompanied by chopped tomato, bell pepper, and green onion, and a healthy amount of seasoning salt with paprika. Deviled eggs are a party and picnic favorite, and these were colorful and tasty, particularly when you added some crunchy onion to each bite of egg. The smoked and fried chicken wings were coated with the same salty and spicy dry rub. The wings were fried crisp but were still moist inside and had a moderate smoke flavor that was complemented by the Alabama white sauce that came with it. White sauce is made with cider vinegar, horseradish, brown sugar, and mustard, and it’s not a common style to find in California – props to Lucille’s for mainstreaming an obscure American style.

Since our New Zealanders were eager to try as many things as possible, all four of us at the table got two-meat combos with different sides and shared. Since the portions are generous, this meant an awesome variety, and amount of food was on the table. Of the meats, we agreed the St. Louis ribs, brisket tips, chicken with Alabama white sauce, and pulled pork were the clear winners. The brisket tips (called burnt ends) are a fatty piece of meat that cooks to tenderness inside a shell of crusty sauce, and were particularly good. The St. Louis ribs were both meatier than the baby backs and were in a sauce that had a better balance of sweetness and spice. The baby backs were by comparison almost like the sweet tomatoey ribs from Polynesian restaurants.

The sliced brisket was very good, but not quite as fine as the burnt ends, and I’d certainly have it again. The tri-tip wasn’t as popular because that lean cut becomes dense, and chewy when cooked past medium, which this was. It hadn’t dried out and wasn’t a failure – if I’d had this without the other meats to compare it to, I’d have called it a modest success.

The spicy Southern greens and fried okra were my favorite sides, and both were prepared at expert level. I liked the corn pudding very much once I removed the huge lump of honey butter that had been put on top of it.  When you have something as sweet and subtle as good corn pudding, adding sweetness is a mistake. Sure, put it on the table for those whose sweet tooth knows no bounds, but let those who like the natural flavors of their food enjoy it. I wasn’t a fan of the tomato pie but other people at the table were. This mix of roasted tomatoes and cheese in a ritz cracker crust reminds me of old school Italian American food that has never been one of my favorites, but that’s apparently exactly how it’s made. Likewise, I didn’t like the mashed potatoes because they contained lots of cream and were whipped, and I prefer mine with a few lumps for texture. The cole slaw was good, the beans weren’t – they were a bit under-seasoned and there was much more broth than beans.

A variety of desserts are offered, but we laughed when our server offered them. We took home enough food for an entire second meal, and if you order starters here, you’ll probably do the same. You might do that even if you don’t order starters, because the portions are that generous.

I was in the neighborhood with my brother a few days later, and since he heard about the smoked fried chicken he was eager to try it. We decided to order a half-chicken dinner with Hatch chile cheese grits, and fried okra sides and an entrée of jambalaya with a wedge salad. The wedge was the standard item with a tangy blue cheese dressing, and I was pleased that they hadn’t tried to Southernize it by making it sweet or spicy. The grits were quite good, the dried and crushed corn a near-flavorless vehicle for cheese and sharply spicy Hatch chile. It’s a seasonal item, and if you like roasted green chile, get these while they’re still on the menu.

The chicken is offered with either a hot honey sauce or Lucille’s version of a Nashville sauce. I was wary of both so asked for them on the side. This turned out to be the right thing to do, because I didn’t like either. I have never understood putting honey on fried chicken and the version with chili pepper in it didn’t convert me, and the Nashville hot sauce reminded me of Chinese chili oil, thin, runny, and one-dimensional. I tried both sauces and ate the juicy chicken unadorned except for salt and pepper. The chicken usually comes with Kool-aid pickles, a Southern novelty that I declined.

The jambalaya was decent but not exceptional, with plenty of sausage and seafood in a sauce that I found just a bit heavy on the bell pepper. It was good, but the Ragin Cajun is still my go-to for this item.

On both trips we tried cocktails, and found them to be generally well made and balanced. Beer and wine are available too, though the wine selection is curiously unbalanced. Chardonnays and Cabs are there, but not some of the wines that go best with roasted meat and spice, like Syrah, Tempranillo, or Zinfandel. I assume that they keep this list relatively short because most people associate beer with barbecue, but if they offer wines that are better suited, they might sell more of them.

Dinners at Lucille’s start at around $20, with the mammoth two meat combos at $36, modest for the amount and quality of food. Lucille’s has either won or been runner-up in our Readers’ Polls for best barbecue for as long as I remember, and they maintain an enviable consistency of quality. There’s more than barbecue at Lucille’s, but that’s what I mainly go there for, and I always leave with a takeout bag, and a smile.