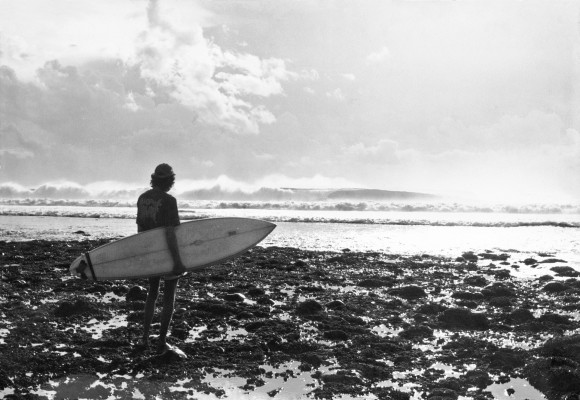 You probably know Eustace Tilley, even if the name doesn’t sound familiar. He’s the mascot of the New Yorker magazine, decked out in gloves and top hat, studying a butterfly through a monocle. In a small history of the famous lepidopterist, one writer observed that it was not clear whether readers of the storied magazine were meant to identify with Tilley or laugh at him. Even when Tilley appeared on the cover of the first issue, back in 1925, he was already a “foppish anachronism,” more suited to the Victorian era than the Jazz age. 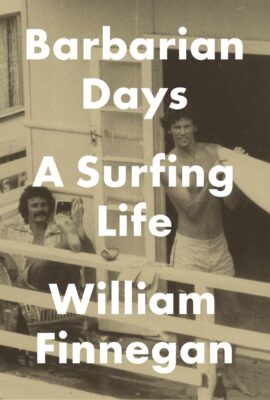 William Finnegan will read from Barbarian Days: A Surfing Life 7 p.m. Friday at {pages: a bookstore} in Manhattan Beach.

The more optimistic interpretation is that Tilley sees things others don’t. The squinting eyes, and the miniature looking glass—firmly fixed to some invisible garment for frequent use—suggest a reverence for close observation, even of a crudely rendered trifle: the idea that if you pay close enough attention, just about anything is worth reading and writing about.

The writings of William Finnegan, a staff writer at the New Yorker since 1987, certainly support the second picture. Finnegan writes insightful and thoroughly reported stories about places and people that probably aren’t getting enough attention. Ranging from Mozambique to California’s Antelope Valley, he unearths hidden situations that the reader quickly realizes are of interest to just about everybody.

Finnegan will be appearing at [pages: a bookstore] this Friday at 7 p.m. to discuss his excellent new book, Barbarian Days: A Surfing Life. The book documents his obsession with surfing, and how it has shaped and informed his life. And although most of his writing has been about subjects other than surfing, there is a faint connection between his off-the-grid wanderings and his journalistic tendencies.

“My inclination in most stories is to look for the outsider,” Finnegan said in a phone interview. “It’s a reporting challenge. But I try never to write about anybody that has a press agent.”

Barbarian Days could be called a thematic autobiography. Though the whole thing unfurls in a pretty straightforward chronology, place, not time, is the guiding principle. Specifically, the places where he surfs.

There is a childhood, shuttling between the point breaks near Los Angeles and the reefs off the Hawaiian Islands. There is a multi-year surfari, with stops in the South Pacific, Australia, Indonesia, eventually Africa. And there are terror-inducing waves off San Francisco and in the North Atlantic, experiences forcing Finnegan to look harder at his tenuous acceptance of adulthood.

Between all the shattered boards, shattered bones and shattered love that the waves surround, the ocean would seem to suffice. But there is a sneaky undercurrent that runs throughout the book. It appears and disappears like waves themselves, emerging in the far-flung locales that Finnegan surfs, and receding with the subtlety of a neap tide.

It comes to the surface in Lagundri Bay off northern Sumatra, with the caustic description of a typical European backpacker, “sweating like a donkey” in a fetishistic search for third-world authenticity. It sits like still water in Apia, the capital of Samoa, when Finnegan dismisses a group of non-surfing travellers as nothing but “sightseers.” And it clings to Finnegan’s characterizations of his winter surf pilgrimages to Madeira, a grouping of Portuguese islands in the North Atlantic. (“Vacations, these were not.”)

This notion—that Finnegan’s journeys are somehow more authentic or redemptive because they include riding pulses of water on a piece of fiberglass—can be hard to swallow in the abstract. In the hands of a lesser writer, it could easily come off as macho posturing. But what he is really getting at is the way in which surfing fills out a life.

The committed surfer will know fairly quickly what Finnegan means; the way in which a day that would otherwise be considered misspent or even wasted is somehow noteworthy because you went surfing. This feeling cannot be explained solely by the lingering euphoria of a good session. Surfing dignifies, it excuses, and it ennobles. 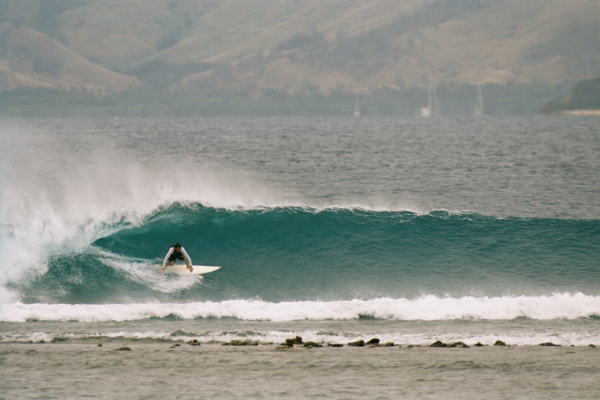 Of course, “the committed surfer” is a small audience as mass-market books go, even as the sport skyrockets in popularity. And Finnegan, who has spent much of the last 30 years chronicling things like civil wars and drug cartels, worked to find a generally readable way to express the intangible ecstasy a good ride can produce.

“You can’t bore [the non-surfing reader] to death with surf stories,” Finnegan said. “You have to somehow connect it to life.”

A good portion of this non-surfing content comes from Finnegan’s persistent engagement with the life of the mind. Even before he begins working for the New Yorker, he describes constantly reading and writing while crossing the globe, composing a lengthy novel inspired by his time as a railroad brakeman.

This literary heritage is enhanced by time Finnegan spent working at a bookstore in Lahaina, on Maui. The bookstore was called Either/Or, an offshoot of the beloved Hermosa Beach institution that once loomed over Pier Avenue.

The Lahaina store had an extensive and wide-ranging collection, and anything it was missing could be sent over from the mainland. But unfortunately, the intellectual feast available at Either/Or went mostly unconsumed. Finnegan recalled that the store made rent mostly from selling “coffee table books to tourists, Surfer magazine to surfers, and hippie books to the hippies.”

One of the most enjoyable parts of Barbarian Days is the way even a surfer as experienced as Finnegan expresses awe at the complexity of a lineup. He writes of the need to put in time to truly understand a break.

Even as he pushes boundaries and pioneers new spots—he lucks into his greatest surfing discovery by unearthing a reef map that had been classified since World War II—he wonders what it is all amounting to, and struggles to feel at home anywhere. This urge to hunker down, to stay put and focus on one thing, forms the yin to the book’s yang of compulsive exploration.

Finnegan finds himself unexpectedly enamored with Australia, enjoying the country’s waves as well as its democratic, laid-back vibe. (In one of the book’s best details, Finnegan covers the temperature gauge of the rickety van that carries him across the Outback with masking tape, then writes “She’ll be right” over the tape, drawing laughs from station attendants everywhere.) But although he lands a series of good restaurant jobs, he finds himself unable to engage socially. He skips the restaurant Christmas party, date-less and hating the feeling of being perpetually “on the outside.”

In a pivotal moment, Finnegan begins teaching at a school for black children in apartheid-era South Africa. For the first time in years, he feels compelled to stay in one place for a reason other than good surf. The plain wrongness of the system of racial segregation, and the fact that his school becomes a focal point in the resistance movement, cause him to stay in South Africa longer than he planned, even though an “obsession with scoring waves felt, under apartheid circumstances, vaguely embarrassing, almost ignominious.”

Coincidentally, or perhaps not, it is in South Africa that Finnegan finds himself drawn to “politics, journalism, questions of power,” the things that would shape the rest of his career. 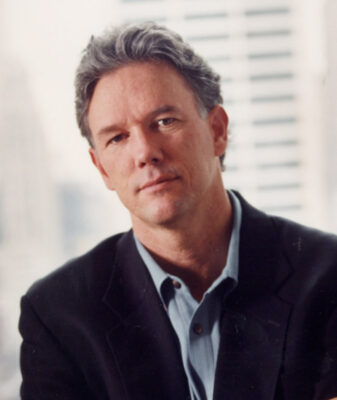 If there is a downside to Barbarian Days, it is an accompanying worry that one’s own adventures cannot possibly measure up. This feeling was particularly acute for a surfer who is taken with the possibility of surf travel and discovery.

In one notable passage, Brian Di Salvatore, one of Finnegan’s primary surfing companions, unloads his fury in a letter to Surfer Magazine about a photo spread that showed the world an amazing wave they had hoped would forever remain a secret. If a spot so remote could be so thoroughly exploited, did it mean that “everything untrammeled in this world” would eventually become “sullied and spoiled”?

When I spoke to Finnegan over the phone, I asked him if he thought that discovery like the kind he did some 30 years ago would be harder or easier to do today, expecting a downer of answer. Instead, he surprised me with his optimism.

He pointed out that famous spots like Malibu and Rincon were crowded even in his youth, and that we tend to romanticize how good things were in the past, ignoring all the real difficulties surfers no longer have to face. (My mind leapt immediately to the book’s many scenes in which Finnegan, leashless, is forced to swim for his board.) Even farther afield, he said, opportunity remains.

“Some of the specific spots we found and surfed have resorts now, so in that sense the trips can’t be done,” he said. “But certainly you can still go looking for waves…there’s just so much coastline.”

Much like writing an original story, then, finding new waves requires persistence, and a willingness to look in unlikely places. In his most recent piece of reporting for the New Yorker, Finnegan wrote about illegal gold mining in the dizzying altitudes of the Peruvian Andes. Speaking of his approach, Finnegan said: