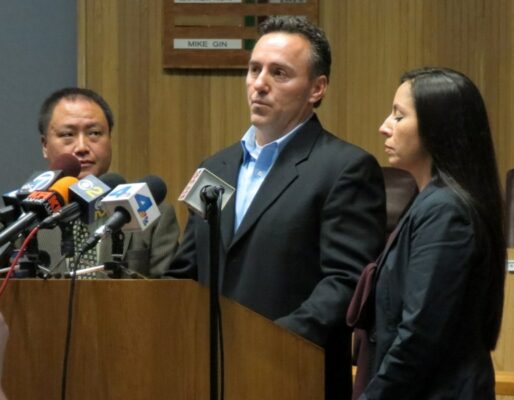 Mayor Mike Gin (left) looks on as Rich and Maria, parents of the 13-year-old male stabbed on Dec. 29 at the South Bay Galleria, talk to reporters about their son and the $25,000 being offered to anyone who has information that might lead to the arrest of his attacker. Photo by Rachel Reeves

The Federal Bureau of Investigation and Redondo Beach Police Department are offering a $25,000 reward for any information that might lead to the arrest and conviction of the man who stabbed two 13-year-olds at the South Bay Galleria on the evening of Dec. 29.

While the images are not clear, police are hoping the videos might “jog somebody’s memory” and that someone who was at the Galleria on Dec. 29 might be able to recognize the figure, who has been described as a black male in his 40s.

At Thursday morning’s press conference, Redondo Beach Mayor Mike Gin thanked the law enforcement agencies that have been working on the case and decried the crime, which he called “particularly gut-wrenching” given its victims were youth.

Gin extended heartfelt thanks to the parents of the male victim for the courage they demonstrated in going public with their story. Parents Rich and Maria, who did not divulge their surname to protect their son, spoke candidly about their teenager and his traumatic experience at the South Bay Galleria.

They emphasized to reporters the importance of making the public aware “that this evil monster is still at large,” Rich said.

Police are calling the attack “random” and “unprovoked.”

Lt. Hoffman said no words were exchanged between the victims and the perpetrator before the stabbing. The victims attest they had no prior contact with the man who injured them, and were sitting on a bench outside AMC Theatres on the third floor of the mall when the attacker approached.

“He’s doing good, he’s alive and we’re so thankful for that,” Maria said, expressing an urgent desire to see the “monster” that hurt her son brought to justice.

Rich said his primary motivation in going to the media is to get the “dirtbag off the streets” before “another parent has to go through the pain and agony [he and Maria] did.”

He recalled the night of the stabbing, the night his son went to see a movie with two friends – the other victim and her sister – and remembered receiving that heartbreaking phone call about the stabbing. He remembered showing up to the mall to a bevy of emergency vehicles and to a roped-off crime scene.

“That was devastating, to say the least… You don’t know the fate of your son at that point,” he said. The sickening realization that his son had been stabbed was an “awful feeling that [he] wouldn’t put on [his] worst enemy.”

Rich said his son has been “very, very strong” throughout the ordeal, and is receiving professional counseling to deal with the trauma he experienced. He described him as “an amazing 13-year-old” and “not a gangbanger” but a “good, normal kid” who was “very goodhearted and had a lot of friends.”

He added that his son was named student of the month just weeks before he was stabbed. 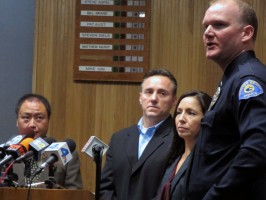 Lieutenant Joe Hoffman (far right) talks to reporters about the $25,000 being offered to anyone who has information that might lead to the arrest of the man who attacked and stabbed two 13-year-olds at the South Bay Galleria on Dec. 29. Photo by Rachel Reeves

Police are asking members of the public to share any information they might have about the incident or the suspect.

“No piece of information is too small,” Hoffman said.

He thanked the FBI for stepping in to assist the Redondo Beach Police Department, which he said is “relatively small” and “reach[es] maximum capacity of [its] resources pretty quickly.”

Hoffman also said police have increased patrols at the Galleria in order that “people realize Redondo Beach is a safe place to visit.”

To report any information about the incident or the identity or whereabouts of the suspect, contact the Redondo Beach Police Department’s tip line at (310) 937-6685, text (310) 339-2362, or email crimetips@redondo.org. 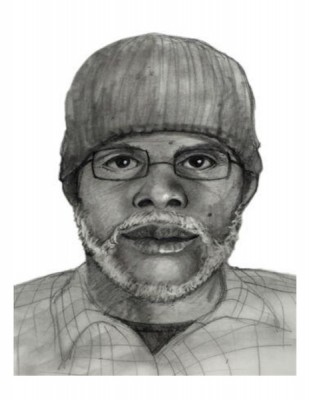 A sketch of the suspect wanted in the stabbing of two minors at the South Bay Galleria. Photo supplied