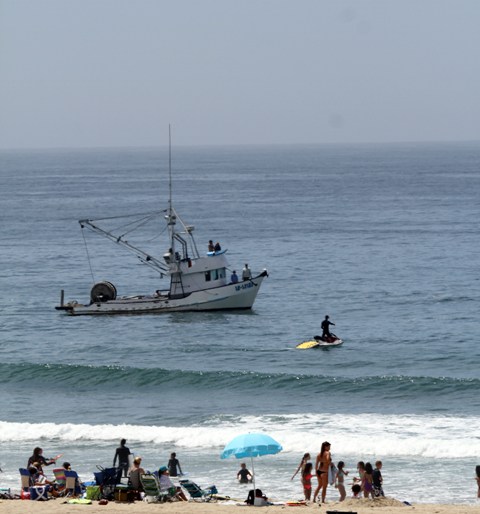 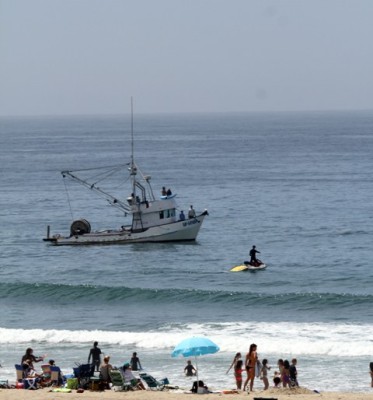 Three juvenile great white sharks, ranging from 4 to 7 feet, were spotted off the coast in Manhattan Beach late Tuesday morning.

“There have been consistent shark sightings through the middle of July to now in the Manhattan Beach area,” said Kyle Daniels, captain lifeguard for the Los Angeles County Fire Department. “Nothing actually really happened.”

According to Ken Peterson, a researcher at Monterey Bay Aquarium, the sharks were “extremely close to the shoreline” — about 20 yards offshore — which he says shouldn’t pose any harm to beachgoers under lifeguard supervision as “they’re just out there with the other fish.”

However, the proximity was too close for the team of marine biologists and researchers, who had intended to tag the sharks as part of Monterey Bay Aquarium’s Project White Shark, a study started in 2002 to research and exhibit great whites caught off the California coast.

The collaborating team from Cal State Long Beach’s Sharklab, led by Dr. Chris Lowe, took to the coast on a fishing boat from 9 a.m. to 2 p.m. Tuesday to capture, tag and release juvenile whites. They commissioned a helicopter to assist in spotting the sharks, Peterson said.

According to Dr. Lowe, the team spotted the three juveniles between 10 and 11:30 a.m. but was unable to wrap a net around them.

“The net has to drop to a certain depth,” Peterson explained. In a process called “pursing,” the sharks should be scooped out of the water using the net and put on a holding place until they are tagged and released, he said.

The team has tagged 100 animals since 2002, Peterson said, and has obtained “great data” about the animal’s migration habits and its use of the habitat.

“There’s a lot of brand new information that’s coming out of this research,” he said.

Daniels said he has noticed a trend of sharks sighted closer to the shoreline, but it’s not necessarily a cause for concern.

“We’ve been monitoring and they’ve been getting to the swimmers,” he said. “No one’s been hurt. We’re keeping a closer eye on it, and most people have been seeing them all summer.”

A baby great white, about 5 feet in length, is spotted underwater last week near 38th Street in Manhattan Beach. The video was shot using GoPro camera. Shot by Mark Paaluhi