“Blood”: a superb examination what binds and destroys us [MOVIE REVIEW] 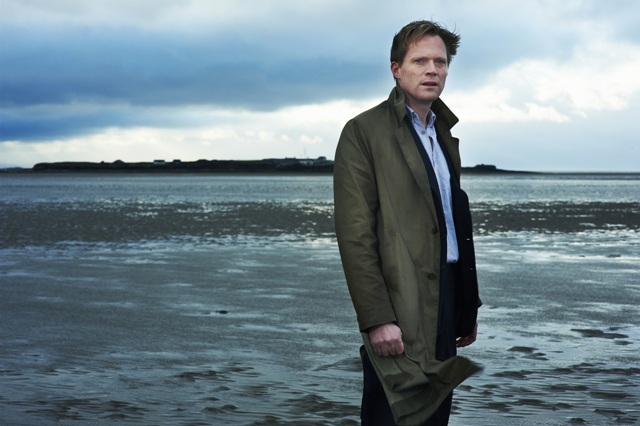 “Blood” foretells a theme within its title, for blood is both what binds and destroys. The story of “Blood,” a family tragedy of Greek proportions, is an old one but one into which fresh breath has infused by writer Brian Gallagher and expertly delivered by director Nick Murphy.

Joe Fairburn (an intense Paul Bettany) is a leading light in the band of cops patrolling their seaside community. His father, Lenny (a complex Brian Cox), was the former head of the unit, now forcibly retired and suffering the early stages of dementia, still rules Joe’s and younger brother Chrissy’s every move and action within the police force, whose thuggish old school approach preached that banging a few heads got the best results in controlling the bad guys. This is a mindset no longer shared by those who now run the department and especially not by Robert Seymoore, the always remarkable Mark Strong. Robert’s philosophy and that of Joe are at odds and it is these “odds,” in both senses of the word, that shape the action as Joe, in trying to solve the murder of a local school girl and classmate of his daughter’s, makes a catastrophically bad decision fed by anger, emotion and gut instinct. Convinced that Jason Buleigh (a particularly effective Ben Crompton), a minor sex offender recently released from prison, killed the girl, he is outraged when Jason is released from custody pending the discovery of more direct evidence of his guilt. Taking matters into his own hands as his father would have and dragging younger brother Chrissy (Stephen Graham) along for the ride, Joe accidentally kills Jason. Rationalizing his actions as resulting in an outcome for the greater good, he is caught in an inextricable trap of his own making when, using good old fashioned investigation, Robert discovers the real killers. It is Joe’s desperate attempts at cover-up that will lead to his spiraling disintegration. Piling bad decision on bad decision, he loses control of Chrissy who is unable to live with the guilt of what they have done.

Like any thriller starting out with a “will he or won’t he” get away with it, Gallagher and Murphy have, instead, focused on the emotional meltdown of Joe. Swaggering when we first meet him, Joe is a leader in his department with a beautiful wife and teenage daughter, caring for a father who was his greatest influence but who now floats in and out of present day reality, still doling out the kind of advice that every son dreads, “Don’t fuck up. Don’t end up a window cleaner.” But Joe, who has always controlled younger brother Chrissy, is weighed down by the responsibility of caring for others. The death of a girl so close in age to his own daughter only heightens his vulnerability and reminds him of past failures, failures he is determined at an all too high cost, not to repeat. Overwhelmed, often drunk and bitterly internalizing his inability to communicate with his family members, Joe is a time bomb waiting to explode; and when he does, the consequences for everyone will be devastating for Jason will not be the only victim. Joe is consumed by guilt, a guilt that Robert describes as the worst kind – the guilt that comes with getting away with it – and it is this guilt that we witness in Joe.

Jason remains a character throughout, appearing more regularly to Joe as a reminder of what he’s done and serving as a conscience visible only to him, visits that occur with increasing frequency as Joe descends the rabbit hole of mental instability. This is a device filmmakers use all too frequently and can be very trite; here it heightens the tension and underscores Joe’s increasingly tenuous grasp on reality as he tries to stay ahead of his own machinations.

The color palette of the film darkens in tune with the action and George Richmond, the director of photography, succeeds in training his camera on the small details that mirror Joe’s anger. Filmed on the Wirral peninsula in northern England, the desolate coastline is a telling character in the narrative. It is, however, the superb and intense acting that sets this film apart. Bettany’s beauty is, in itself, a pointed juxtaposition between the physical and the mental aspects of his character, just as the stocky and rather ordinary looks of Graham as Chrissy serve to intensify his desire to make things right. Brian Cox is always a formidable presence and he rides that line of failing mental abilities in such a way that he convincingly portrays swagger and vulnerability. As always, Mark Strong brilliantly conveys strength and humanity, vulnerability and growth in ways so subtle as to draw the viewer into his reality. His presence in the new AMC series “Low Winter Sun” is the best reason to watch it. An intense film, this is 90 minutes that will fly by and leave you as drained as the characters of this drama.