A Goldilocks economy, “not too hot, not too cold,” says economist Thornberg 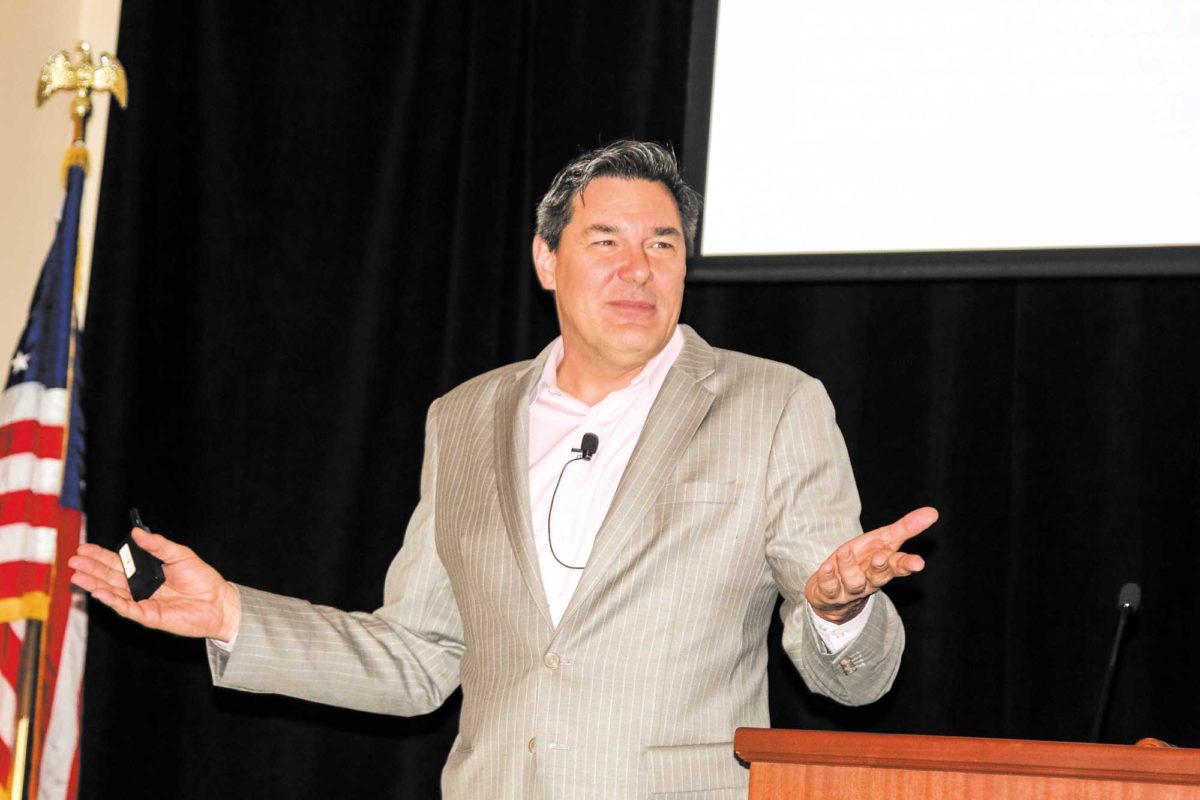 Beacon Economics founder Christopher Thornberg asks what’s not to like about the economy during his annual South Bay Economics Forecast last at Terranea Resort. Photo

Beacon Economics founder Christopher Thornberg asks what’s not to like about the economy during his annual South Bay Economics Forecast last Friday at Terranea Resort. Photo

Beacon Economics founder Christopher Thornberg made his name as an economics forecaster by predicting the 2008 Great Recession in 2006. Since then, he has been a sought after speaker known for making the “dismal science” of economics entertaining and educational.

And for not predicting another recession.

“Same forecast as last year. No end to this expansion in sight, despite all the insane headlines,” Thorberg said at the start of his sixth annual South Bay Economic Forecast Report to the Palos Verdes Chamber of Commerce last Friday at Terranea Resort.

Thornberg compared the economy to Goldilocks’ porridge. “Not too hot, not too cold.”

“Investment spending is stable. Interest rates are down. And don’t tell us we need more jobs. Unemployment is at a 50 year low. We have too many jobs. South Bay unemployment is below full employment. That’s why Terry can’t find workers,” he said, referring to Terranea CEO Terri Haack, who introduced him.

“It’s not the Chinese and Mexicans who are stealing our jobs. It’s old people, including presidents. If you’re over 70, don’t run for president,” he quipped.

“So why did 48 percent of economists in the 2019 Wall Street Journal survey predict a recession in 2020?” he asked.

“One answer is we are in the longest expansion on record. 10 years. Ergo, we’re due.

“‘Business cycle’ is a misunderstood term. It refers to recession cycles, themselves — the slowdown, trough and recovery. It doesn’t describe when recessions happen.”

Another argument for an imminent recession is self fulfilling prophecy, he said.

“A reporter on CNBC said, ‘You know, if we talk about it, that could cause a recession.’ Wow, that’s quite a power you have Spiderman. I don’t recommend listening to CNBC. It leads to brain tumors. Reporters like nothing better than to interview other reporters.”

“Growth is the economy’s default mode. Recessions are an anomaly, caused by a large, rapid, sustained shock to the system. If you don’t have a why, the answer to when is never.”

Following his macro economics lesson, Thornberg cited his reasons for confidence in the economy.

“Two-thirds of the U.S. economy starts with the consumer. A health consumer is a heavy keel,” he said.

“Why do we keep hearing people can barely keep food on the table? It’s so bad in the U.S. people travel to get away? Food is so expensive, we need to eat out every night? Recreation is increasing because we need to take our minds off our troubles?

The questions were facetious. Foreign travel is up 29 percent over the past three years. Dining out is up 18 percent and recreation is up 15 percent, he pointed out

“We’re having fun. Interest rates are down, household savings are at 8 percent, up from 2 percent in 2007. The struggle is navigating the lines at Disneyland.”

Labor shortages and other problems the economy is facing, are attributable in large part to the housing shortage, Thornberg said. But he dismissed the prevailing wisdom that housing is an affordability problem.

“Build the damn housing,” he said.

“Income is rising faster than housing costs. But don’t let the facts get in the way of policy. Bernie Sanders would put a national cap on rent. Thanks Bernie, for solving a problem we don’t have.

As evidence, Thornberg noted that Los Angeles County building permits were down in 2019.

“Communities that don’t want ADUs won’t build them and communities that want them already have them. They’re just not licensed,” he said, referring to bootleg apartments.

“The housing shortage is about densification. People go crazy over the issue, but it means less traffic. It’s better for the environment. If we build more housing downtown, we don’t need to build houses on hillsides.”

People opposed to gentrification are on the wrong side of history, he argued.

California’s housing shortage can largely be blamed on the 1978 passage of Proposition 13, which restricts increases in property taxes. In last year’s talk, he described Prop. 13 as “the most ridiculous tax ever… a horribly regressive tax for a progressive state.”

“Any city manager will tell you that 80 percent of their budget goes to residents. But property taxes are only 20 percent of their revenue. So they don’t want more housing. They want more commercial development (for lower costs and more sales tax revenue).

“We need to be like Texas, where every property is taxed the same. Seniors aren’t forced out of their home. They get property tax discounts.”

“I’d flip the 2020 ‘split role’ ballot measure (which would exclude commercial property from Prop. 13 protection). Keep Prop 13 for commercial and get rid of it for residential,” he said. He doesn’t think either will happen because any change to Prop. 13 is a “political loser,” he said.

He did mention a bright side to the housing shortage at least for the real estate industry.

“Mortgage delinquencies are at 2 percent, the lowest since 2006. Last year was the best year for home sales since 2007. This year it’s going to be red hot,” he said.

“In 2019, households paid $1,200 more for goods because of the China trade war. Was anyone in this room hurt by the increased cost of underwear or plasma TVs at CostCo?” Thornberg asked.

“The trade war has not influenced us. There’s been no big decline in imports or exports. Yes, we’re buying less from China and selling less to China. But we’re making it up with other countries. U.S. soybean sales to China went from $25 billion to zero. But were the farmers crushed? Soybeans are a commodity. China bought its soybeans from Brazil instead of us. So the Germans who bought from Brazil are buying from us. U.S. soybean sales fell from $55 billion to $53 billion. Why do farmers still support Trump? I know. They got a $4 billion bailout in exchange for $2 billion in lost sales.

“China is far more at risk in a trade war than we are. We send 25 percent of our goods to them. They send 44 percent of theirs to us.

“Imagine you’re a Walmart buyer. You call your Chinese supplier and tell them you want a 10 percent cost cut to cover the 10 percent tariff.”

Thornberg’s inference was the Chinese supplier has to capitulate or Walmart will take its business elsewhere. 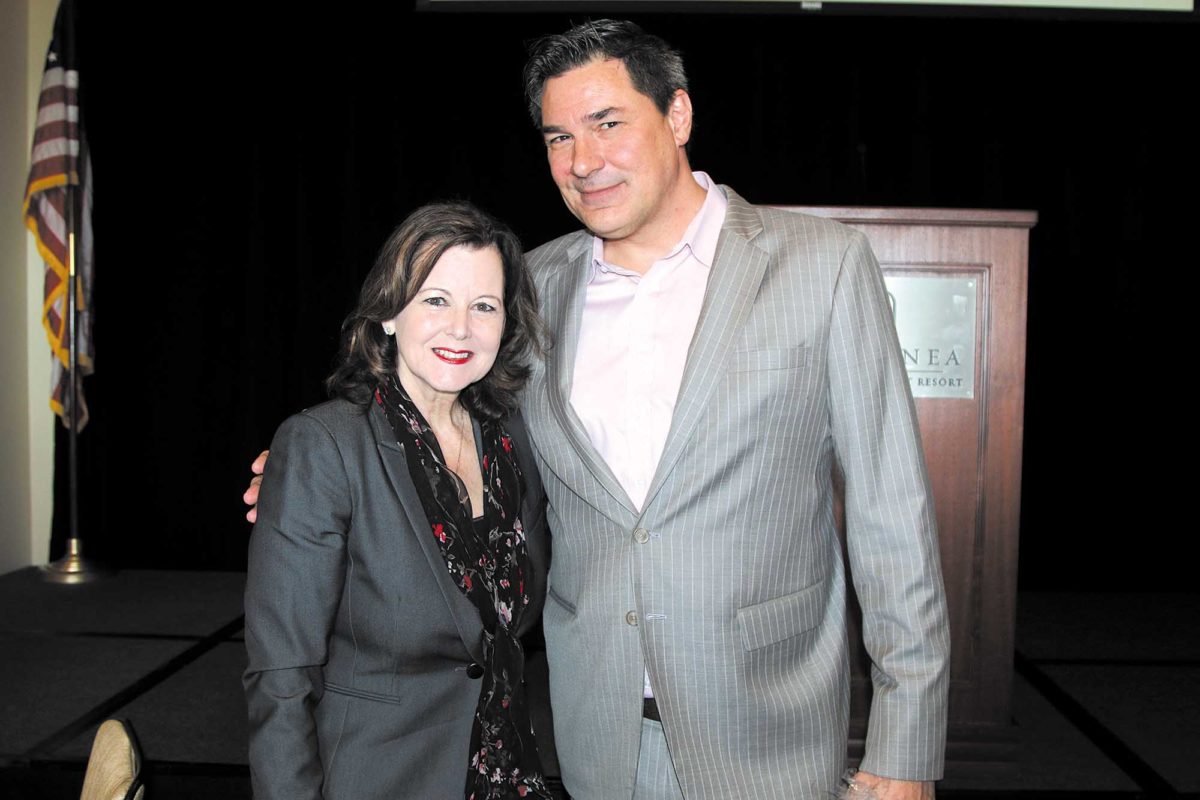 Questions from the audience

Cyber ransom? It’s not an area I’m very familiar with. But I’d start by wiping out traceless currency.

The Middle East? It wasn’t Trump who took out Iran’s General Soleimani. It was the Texans. And yes, they have cruise missiles. It’s a Second Amendment right. If Middle East oil hits $77 a barrel, the Texans will start putting sticks in the ground. He noted that the U.S. is now the world’s largest oil and gas producer. “We’re 20 percent larger than Saudi Arabia and 25 percent larger than Russia.”

Politics? I’m a lousy political forecaster. Every year I think it can’t get any crazier. My prediction this year: Politics is going to get crazier. As politics become more unmoored from reality, we ignore the true issues. We’re tilting toward creating chaos. We almost need a recession to give us something that matters to worry about.

Recommendations? Work with it. Don’t superglue solutions. Go out and prosper. There is a solution. It just needs adult conversations.

Christopher Thornberg is the founder of Beacon Economics. For more information about his 2020 forecasts, visit BeaconEcon.com. ER