A man of Many Voices – Roberto Perlas Gomez in “Hydrogen Jukebox” 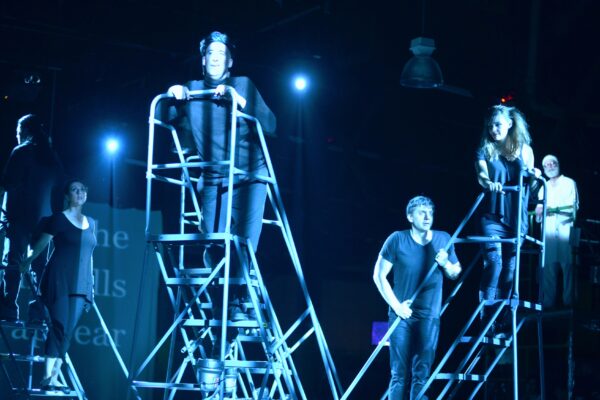 The cast of “Hydrogen Jukebox”. Photo by Keith Ian Polakoff

The last time I met with Roberto Perlas Gomez he talked about hijacking a ship somewhere in the Mediterranean. Oh yeah, right; sure thing, Roberto, uh-huh. But just days later pictures of him were in major newspapers, scowling at the camera and brandishing an AK-47.

Gomez is a baritone who often sings with Long Beach Opera, and he was portraying the brutal Rambo in “The Death of Klinghoffer,” the superb but controversial opera by John Adams. The production was well received.

Gomez, who lives in Torrance, a stone toss or two from Redondo Beach, now stars in LBO’s “Hydrogen Jukebox,” the 1990 opera by composer Philip Glass and Beat poet Allen Ginsberg. There are four performances, beginning Saturday, at Crafted in San Pedro. As we’ve come to expect, the company is presenting a work that is outside the usual repertoire that clings tightly to “La bohème,” “Madama Butterfly,” and “The Marriage of Figaro.”

Gomez is hardly a stranger to Long Beach Opera. In addition to “Klinghoffer” he’s also had parts in “Akhnaten,” “Motezuma,” “The Emperor of Atlantis,” “Cherry Town,” “Die Kluge,” “The Breasts of Tiresias,” “Medea” and John Adams’ best known opera, “Nixon in China.” Two years ago he performed the title role in the company’s “King Gesar,” billed as a “campfire opera,” which took place outdoors near the Queen Mary. It was a curious, demanding piece, with Gomez and Danielle Marcelle Bond the only singers.

“That was,” he says, “probably the most difficult thing I’ve had to do for Andreas (Mitisek) and for Long Beach.”

For some artists, it’s pretty much a straight path from childhood dreams to the performing stage. They take singing and dancing lessons as kids and glide up the ladder through high school and college. But for a long time, Gomez was more likely to become a nuclear physicist than a professional singer.

He was five when he and his family moved from the Philippines to the United States, and they bounced around in California – Oxnard, Santa Monica, Cerritos – before heading east and bouncing around there for awhile, too.

“I was always really good with math and science growing up,” Gomez says. “So it was just logical for me to go into the sciences and pursue a career that people would consider more of a professional career.”

A career in singing wasn’t even a consideration.

“But that was also the heyday of (Luciano) Pavarotti, and one Sunday afternoon there was a broadcast of ‘La Gioconda,’ from San Francisco, and Pavarotti was there singing ‘Cielo e mar,’” he says. “It was an epiphany.” 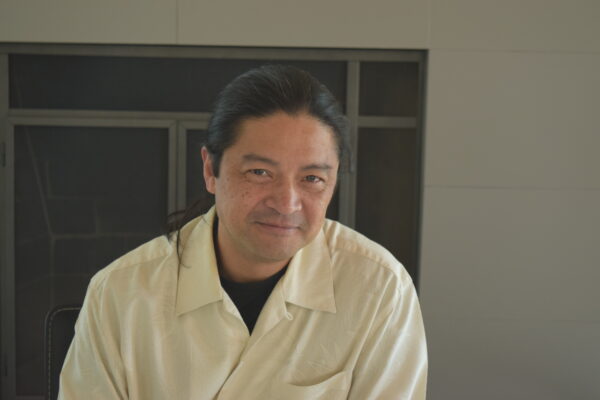 For a while, Gomez tried balancing double majors, physics and music.

“There was no way I could commit equal amounts of time to both. So I made a choice, and it was music. I’ve had a 30-year career with it now.”

The first contact that Gomez had with Long Beach Opera was in the late 1980s, while still a student at Cal State Northridge. The company’s then-director, Michael Milenski, invited him for a small role in Mussorgsky’s “Boris Godunov.” It wasn’t an auspicious beginning: After a couple of rehearsals, Milenski decided that two or three small parts weren’t necessary.

“So I got cut,” Gomez says with a laugh.

A few years went by. Milenski had retired, and with Mitisek at the helm – and ready to undertake an abridged version of Wagner’s “Ring” cycle – Gomez was again contacted, this time for a bit part in “Götterdämmerung,” and this time he didn’t end up on the cutting room floor, so to speak.

Another couple of years passed, and then “Andreas called me up and said, ‘I’m doing “Nixon in China” in Verona, Italy; would you be interested in singing the role of Chou En-lai?’ I said sure. So I auditioned for him and the rest is history. They’ve been using me ever since for a lot of major things.”

Through the latter 20th century

“Hydrogen Jukebox” is considered a chamber opera, which tends to mean that less is needed to stage it – less performers, less musicians, less props or scenery. “Aïda” and “The Trojans,” for instance, sit on the other end of the spectrum.

The libretto draws from a wide range of Ginsberg’s poetry but tends to grapple with late 20th century social issues, from the Beat era through the countercultural movement of the 1960s and the anti-war movement of the ‘70s as well as environmental awareness in the ‘80s and beyond. There is a poet, and there are six archetypal American Characters. These include a waitress, a cheerleader, a priest, a mechanic, a policeman, and a businessman.

Most productions project various imagery behind the performers, a media barrage to complement the content of the poems, of which there are 15 altogether. “As poetry tends to be,” Gomez says, “there’s very little that’s concrete.” It’s like flashcards, lots of ideas and impressions thrown at the spectator, and not always in a cohesive-seeming linear manner.

Director David Schweizer’s credits with Long Beach Opera go back many years, to Thomas Adès’s “Powder Her Face” and Purcell’s “The Indian Queen.” Most recently he was at the helm for last year’s “An American Soldier’s Tale/Fiddler’s Tale.” So Schweizer is no stranger to inventive interpretations.

In this case, Gomez says, “He gives us a tapestry and within it allows us to create.”

Gomez says he doesn’t think so, but points out that while some phrases proceed rather straightforwardly, there will then be non sequitur phrases as well. In addition, “It’s difficult to memorize in the sense that it’s just a lot of text.” And not only that, but special emphasis and diction to convey the key words and lines of the poetry.

“It’s a very visually active opera,” Gomez continues. “To David’s credit he has done a great job of creating levels within our space. The poet stays on a very high scaffold for most of the piece, and the rest of the singers are mostly on moving platforms. That presents its own challenges, to actually stay on them while the platforms are moving, and not lose our balance.”

Throughout it all, we are immersed in music that shimmers like light reflecting off water, coupled with strong poetic images. “Hydrogen Jukebox” is the child of two highly acclaimed artists and Long Beach Opera’s production is sure to be thought-provoking and widely discussed. 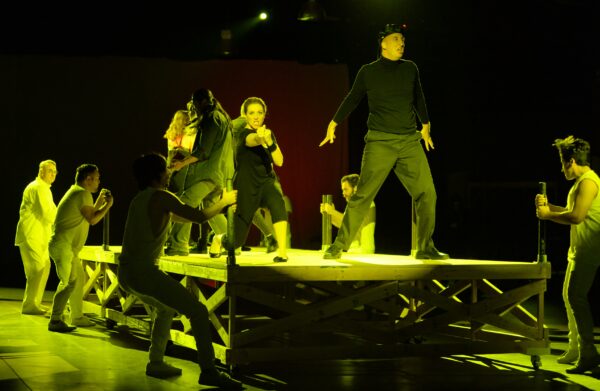 Gomez has performed about 90 roles.

“I like to tell people,” he says, “that since I’ve gotten my AARP card (he’s in his early 50s), I’ve forgotten more roles than I can remember.

“But the staples stay with you. You never forget a Marcello or a Barber or a Giovanni or a Leporello; you don’t forget ‘Traviatas’ – those things that you do over and over tend to stay with you. You can find a ‘La Bohème’ pretty much any time. Those roles never go away.”

In fact, Gomez had recently come home from a touring production through Alaska where, once again, he was singing the role of Giovanni. However, the cold and the drafty auditoriums got the best of him, and he returned more than a little tired.

Nonetheless, Gomez is often on the go, performing in half a dozen productions up and down the state. For example, there are several companies in the Bay Area that only opera aficionados may ever have heard of, such as Livermore Valley Opera and Modesto’s Townsend Opera. Then there’s San Diego Opera anchoring things down south.

Gomez did an apprenticeship with Costa Mesa’s Opera Pacific, a company that unfortunately folded a few years back, and he has had small parts with LA Opera.

However, it all has come down to the always adventurous and unpredictable Long Beach Opera.

“Ever since Andreas asked me to do ‘Nixon,’ in Verona, Long Beach has really become a big part of my artistic life,” Gomez says. “After ‘Nixon,’ he asked me a year later to do ‘Motezuma’ and then it was ‘The Emperor of Atlantis’ and ‘Die Kluge.’”

The roles that Mitisek offers him “just keep things fresh.”

“Very challenging,” he replies. “And they’re not insignificant. They’re big pieces that he asks me to do.

“And you go back to those other pieces (for example, “La Traviata” and “The Barber of Seville”) with a different perception. So this has really become a big part of my identity, and the best thing is that it’s in my backyard. I can come home at night and sleep in my bed, and it’s really great.

“I’m really thankful that Long Beach Opera is here in the area, that I’m singing with them, that they still find things to cast me in. I can’t say enough about it.”

Having now seen the production, I will say that it exceeded my expectations. There’s a bit of a rawness and informality to it that’s invigorating, like we’re in a gym or on the sidelines of a soccer stadium, no doubt in large part because the opera takes place within a warehouse, and because the performers convey a real passion. It’s sort of like a psychedelic “Raft of the Medusa”–pushing us this way and that, with a ‘60s “happening” sensibility, Ginsberg’s words artfully declaimed by Michael Shamus Wiles, and yet with a gravitas provided by the hypnotic music of Philip Glass.

I wish this production could tour area high schools and colleges. It would open up a lot of eyes and encourage lots of young artists in all genres. Definitely one to remember from Long Beach Opera.