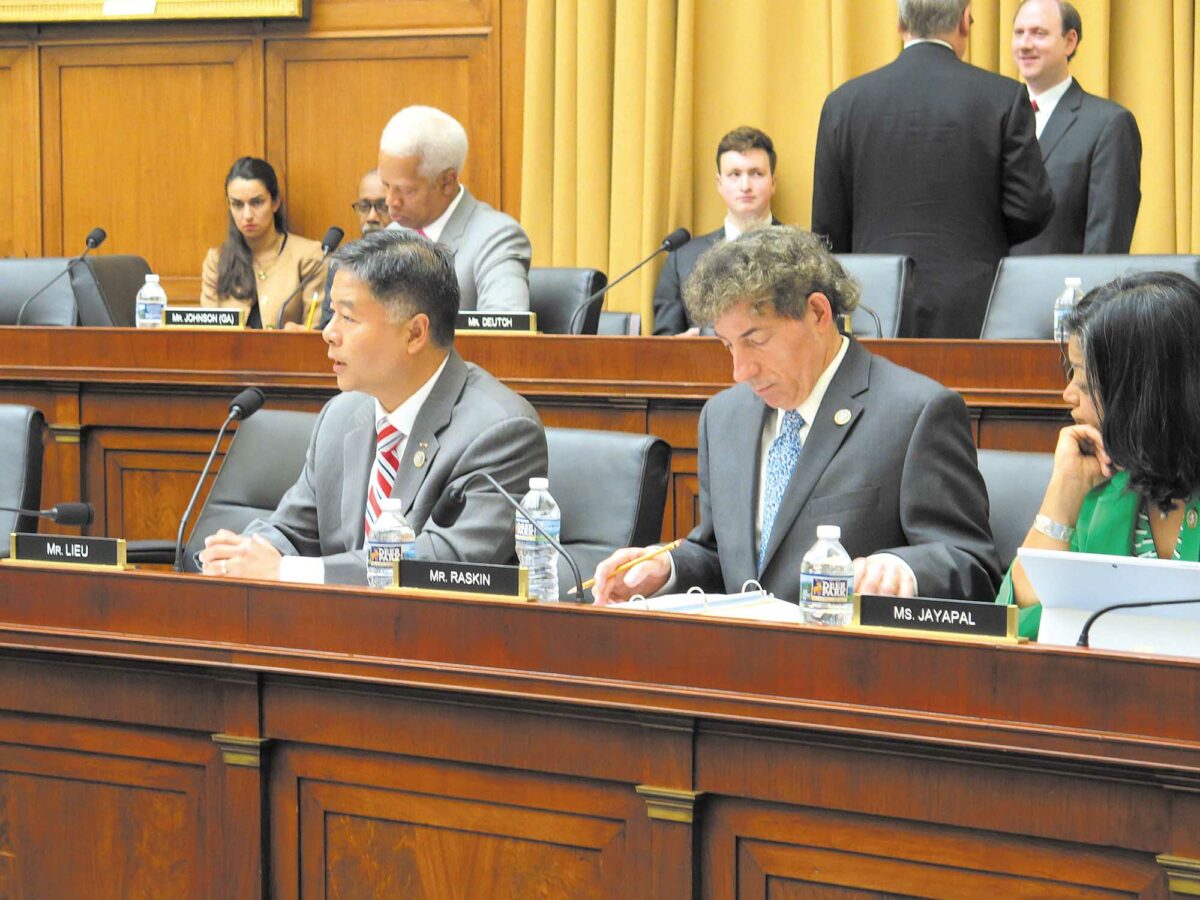 Rep. Ted Lieu in the House Judiciary Committee in 2017. Next to Lieu is Rep. Jamie Raskin, who along with Lieu introduced articles of impeachment against President Donald Trump on Monday. Photo

Rep. Ted Lieu in the House Judiciary Committee in 2017. Next to Lieu is Rep. Jamie Raskin, who along with Lieu introduced articles of impeachment against President Donald Trump on Monday. Photo

Minutes after President Donald Trump concluded the “Save America” rally last Wednesday by instructing the thousands of people gathered on the Ellipse, a park south of the White House, to “walk down Pennsylvania Avenue” to the U.S. Capitol, Rep. Ted Lieu heard a loud, persistent banging on the door of his office in the Cannon House Office Building.

Lieu, a Democrat, has represented California’s 33rd Congressional District, which includes the South Bay, since 2015.

Marc Cevasco, Lieu’s chief of staff, opened the door, revealing officers with the U.S. Capitol Police, who told them they needed to leave immediately. Unsure what was happening, Lieu and Cevasco raced down five flights of stairs and entered the maze of underground tunnels that connect the legislature to the various office buildings its members occupy. Lieu checked the news on his phone, and saw the beginnings of a mob attack that would kill at least five people, injure dozens more, and leave bullet holes and broken windows in the most hallowed public building in the United States.

As he walked through the bowels of the Capitol, Lieu used his cell phone to call Rep. David Cicilline, a Democrat from Rhode Island and a fellow member of the Judiciary Committee. Cicilline’s office is in the Rayburn House Office Building, which, unlike Cannon, was considered secure. Cicilline agreed Lieu and Cevasco could shelter in his office. When they arrived, Cicilline’s staff locked the door behind them, and they watched the attack unfold on television.

At that point, at least one of the three barriers set up around the building had already been breached. Capitol police had summoned riot units to quell the disturbance but, still overmatched, had called for backup from the D.C. Metropolitan Police Department. Within 45 minutes of the conclusion of Trump’s speech, the mob became so threatening that Steven Sund, chief of the Capitol Police, requested aid from the D.C. National Guard. Deploying the National Guard is usually a decision made by a state’s governor. But because Washington, D.C. is not a state, the decision rests with the Department of Defense and the President, as Commander in Chief. In a statement issued on the evening of Jan. 6, Chris Miller, the acting Secretary of Defense, cited conversations with Pence and members of Congress, but not Trump, in deciding to eventually deploy the guard to the capitol.

While still sheltering in Cicilline’s office, Lieu and Cicilline began discussing impeachment. They phoned Rep. Jamie Raskin, a Democrat from Maryland and a constitutional law professor, and Judiciary Committee staff to begin putting together the articles of impeachment.

It became clear the mob was “trying to violently overthrow Congress, and stop us from formalizing Donald Trump’s loss and Joe Biden’s win,” Lieu said in an interview Tuesday. On Monday, he, Cicilline and Raskin, introduced Articles of Impeachment against Trump. Tuesday evening, Speaker of the House Nancy Pelosi named Lieu one of nine impeachment managers, who will present the case for making Trump the only U.S. President ever to be impeached twice. The House of Representatives voted to impeach Wednesday afternoon.

The case now moves on to the U.S. Senate for a trial, with a two-thirds majority needed to convict Trump. Lieu said that, although Trump has just over a week remaining in office, it is essential to hold him accountable for his role in the first siege on the Capitol in more than two centuries.

“The best way to heal our nation is to hold accountable those responsible for inciting the attack on our Capitol. You can’t just paper over Jan. 6 as though nothing happened,” Lieu said.

Impeachment passed in the House, as it did in December of 2019, when Trump was accused of soliciting foreign interference in the 2020 election. That vote, as well as the vote in the subsequent trial in the Republican-controlled Senate in which Trump was acquitted, fell almost entirely along party lines. Lieu expects more Republicans to support impeachment this time, pointing to several in the GOP who have already announced their support for the measure, and to the growing number of Republicans to have distanced themselves from Trump in the wake of the siege. Ten House Republicans voted for Wednesday’s impeachment, while none supported the previous effort.

“We have Republican cabinet secretaries who have resigned in protest of what happened. You have staff members in both Congress and the White House who’ve resigned. So you have a number of Republicans who understand that what happened on Jan. 6 was unacceptable, and that it was incited by Donald Trump,” Lieu said.

Incitement of insurrection is the lone article of impeachment in the four-page House resolution, a brevity that Lieu attributed in part to the fact that almost all of what is alleged played out in front of dozens of television cameras and within sight of where the House and the Senate will cast their votes. The document points to Trump’s comments over the past two months questioning the legitimacy of the November election, and to his statements at the rally that wrapped up shortly before the storming of the Capitol, including, “If you don’t fight like hell, you’re not going to have a country anymore.”

In comments to reporters while visiting the border wall with Mexico in Texas on Tuesday afternoon, Trump denied that he was responsible for what occurred on Jan. 6.

“So, if you read my speech, many people have done it, I’ve seen it both in the papers, in the media and on television, it’s been analyzed, and people thought that what I said was totally appropriate,” Trump said.

According to images and reports from media who were present inside the Capitol and on the grounds outside during the attack, Trump supporters began confronting police officers manning the barricades about 20 minutes before the end of Trump’s speech. At the time, Trump was discussing what he described as problems with the presidential election in the state of Georgia. Several days earlier, Trump cited some of these same issues in a conversation with Brad Raffensperger, Georgia’s secretary of state, a recording of which was subsequently made public. Trump asked Raffensperger to “find” enough votes to change the state’s result and submit a slate of Trump electors for Wednesday’s count. Raffensperger responded, “Well Mr. President, the challenge you have is, the data you have is wrong.” Trump nonetheless repeated many of these claims on Wednesday at the Ellipse.

“Make no mistake, this election was stolen from you, from me, and from the country,” Trump told the crowd.

Trump also insisted that Vice President Mike Pence, who, as president of the Senate, presided over the certification process, had the power to nullify a state’s slate of electors, a claim at odds with the text of the Electoral Count Act of 1887. Shortly before Trump concluded his remarks, Pence issued a public letter saying he “did not believe that the Founders of our country intended to invest the vice president with unilateral authority to decide which electoral votes should be counted.” The Constitutional argument did not appear to sway the invaders who would storm the Capitol. At one point, a man in face paint wearing a viking hat and carrying a six-foot spear bearing an American flag entered an empty Senate chamber and shouted, “Where’s Pence? Show yourself!”

Proceedings to certify the electoral college count began about 1 p.m. Trump concluded his speech not long after. In accordance with measures taken to reduce the risk of transmitting COVID-19, most members, including Lieu, were watching the proceedings remotely, and would venture into the House chamber only to vote. In both the House and the Senate, proceedings were interrupted during the discussion on certifying the slate of electors from Arizona, one of several states in which courts had rejected Trump campaign challenges to the election results, but which Trump continued to insist were faulty.

Late in the evening last Wednesday, when police declared the Capitol secure and the two houses of Congress had reconvened to conclude the certification process, Lieu was able to return to the House Chamber to cast his vote. Congress would eventually affirm Biden’s victory in the wee hours of Thursday morning.

Lieu has been an outspoken Trump critic, but he said that, on entering the House Chamber to cast his vote, he sensed a change even among colleagues who had been unflinching supporters of President Trump. Some who had planned to vote to challenge the certification of certain states changed their mind after returning to finish the certification.

Among the experiences that stood out most to Lieu from the historic day was the moment, while walking in the tunnels under the Capitol, when Capitol Police officers instructed him to remove the pin that identifies him as a member of Congress. The tiny totems are easily recognized by the security guards that man the scores of entrances to various parts of the capitol, but police were worried that the attackers planned to target senators and representatives for harm or kidnapping, a fear later given credence by photos of the intruders with weapons and zip-ties, which can be used as handcuffs.

As Lieu and others gathered evidence in the days that followed the attack on the Capitol, Lieu said members of Congress realized “that Jan. 6 was even worse than we initially thought.”

“This was not a random occurrence. This was a months-long buildup by Donald Trump to try to stop his election loss and to, by force, keep himself in power,” Lieu said.