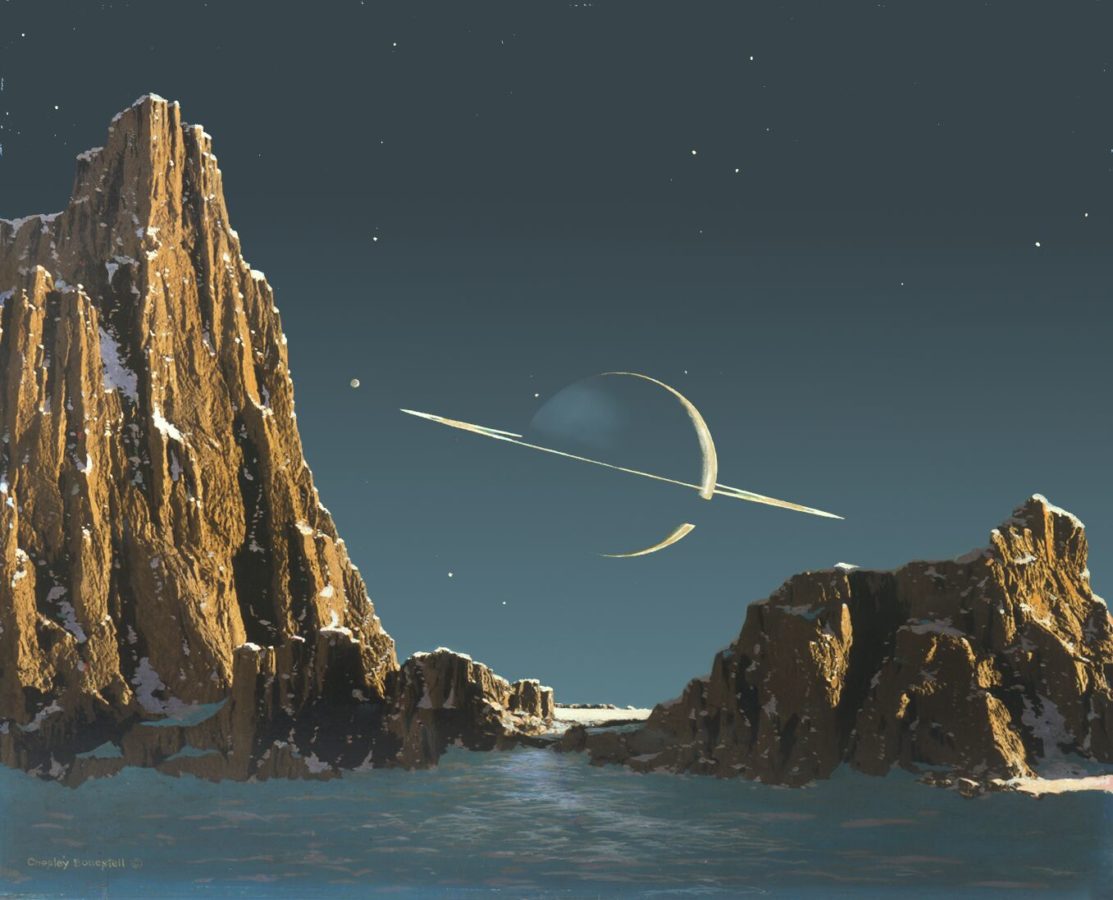 To the Planets and the Stars!
Filmmaker Douglass Stewart’s tribute to space artist Chesley Bonestell premieres at the Newport Beach Film Festival

I think we can call it a labor of love, fueled by persistence and diligence, but also a deep concern that a beloved artist and architect was being forgotten despite his many deeds and accomplishments.
I’m referring to Palos Verdes resident Douglass M. Stewart, Jr., who has just completed a feature-length, 96-minute documentary titled “Chesley Bonestell: A Brush with the Future.” The film was premiered on Tuesday, May 1, at the Newport Beach Film Festival. It screens again Thursday, May 3, at 2:15 p.m.
Bonestell lived two years shy of a full century, having been born in 1888 and dying in 1986. In his youth there were sailing ships, but he was also around long enough to see men walking on the Moon. The latter sight may have been a dream come true, but perhaps it also signaled a decline as to his own relevance and recognition.
Why is that? Because the reality of man in space overtook and replaced the imagining of man in space. Now, let’s step back in time.
In 1949, Bonestell illustrated Willy Ley’s “The Conquest of Space,” and for years afterwards Bonestell was hailed as one of the great, if not the greatest, illustrators of space art. He not only collaborated with the likes of Wernher von Braun and Arthur C. Clarke, producing imagined but carefully researched and rendered views of distant planets and their landscapes, his work frequently appeared on the covers of major publications. If you pick up Michael Benson’s new book, “Space Odyssey,” about the making of “2001: A Space Odyssey,” you’ll find that director Stanley Kubrick “devoured the space art illustrations of Chesley Bonestell” in his quest for insight and inspiration. 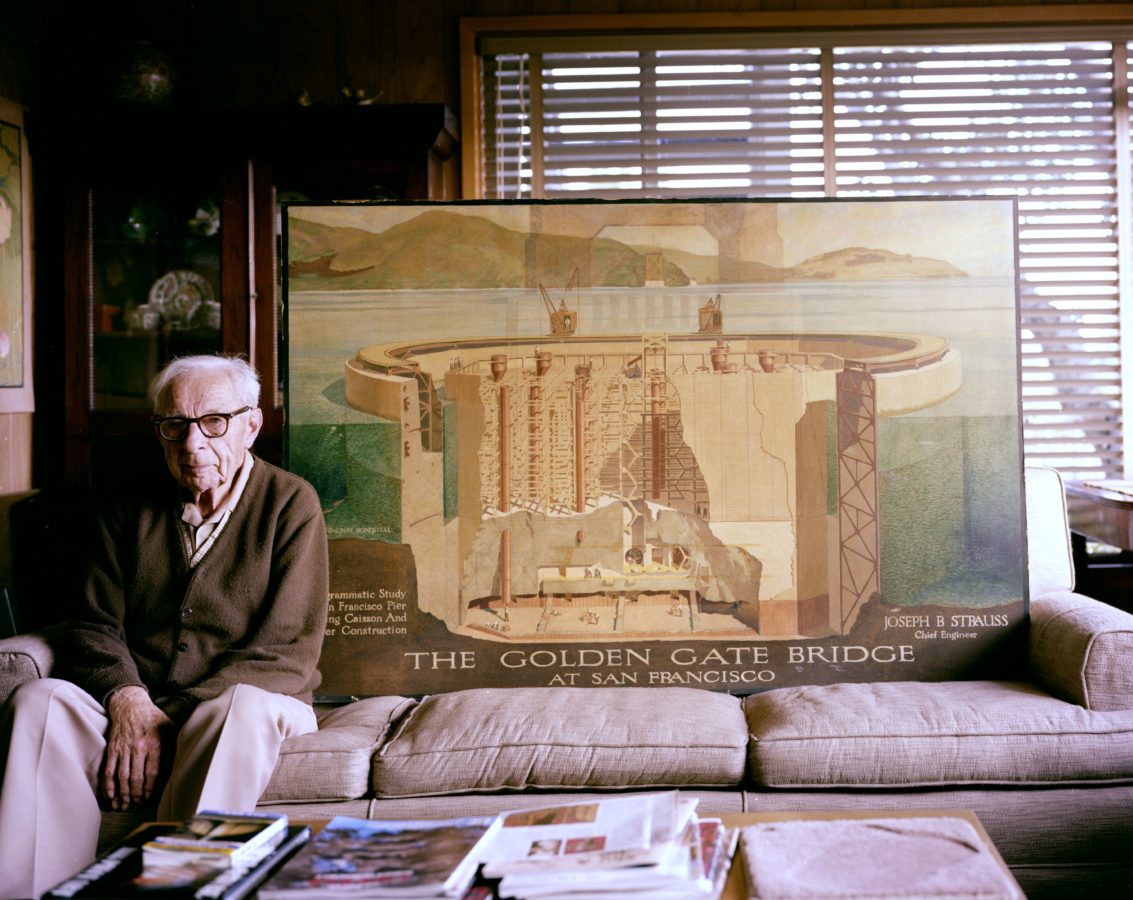 However, that’s only one part of Bonestell’s legacy. As a young man he survived the 1906 San Francisco earthquake and became an architect, and in particular his fame in this field rests on two milestones: One, his paintings of what the Golden Gate Bridge would look like, which convinced a skeptical public that this landmark structure could be built, and, two, his art deco designs for New York’s iconic Chrysler Building.
And then Hollywood called, and as a special effects matt painter Bonestell created background scenes for the Orson Welles masterpiece “Citizen Kane” and George Pal’s “Destination Moon” and “War of the Worlds.” Young men, and women, who encountered his work were inspired by him, and Doug Stewart was among them. 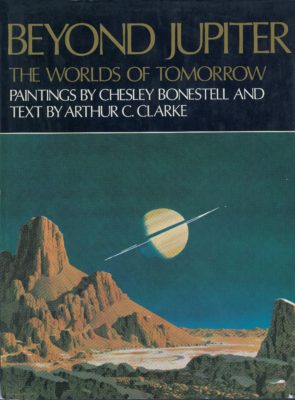 On his shoulders it fell
“When I was growing up I saw Chesley’s artwork in interesting places,” Stewart says, “in science-fiction magazines and books, and there’s something about his artwork that’s unforgettable. It resonates with you and it stays as part of the consciousness. Maybe not right at the top, but it’s in there. There’s something really magical about his painting.”
Stewart has had a long and distinguished career in film, and for 35 years he and his company, DMS Production Services, have been producing tribute films for the Academy Awards, the Emmy Awards, and the Screen Actors Guild, among others, as well as producing and directing “50 Years of Action!” for the Directors Guild of America. And there’s plenty more, such as the six-part homage he produced for Bill Clinton on the former President’s 50th birthday.
And in the background, always, was Chesley Bonestell.
“As I went through my career in show business I always thought, Hey, somebody’s someday gonna do a film about him because his books are so famous and his artwork is just so mesmerizing. Finally I got to the point where I needed to find out for sure.”
That was in 2014, and Stewart embarked on an internet search. Certain names connected to Bonestell would pop up over and over, and one of the foremost among them was Ron Miller, a noted space artist but also the author of two books on Bonestell’s work, one published in 1983 and the other in 2001.
Eventually, Stewart located Miller’s telephone number and rang him up at his home in Virginia.
“I told him a little bit about who I am and what my mission was,” Stewart says. “And I said, Has anyone done a film about Chesley? He said No, no one has. I said, Well, here’s the important question: Is anybody doing one right now? And he said Nope; it’s time to do one, you should do it, and I will help you.”
From the way Stewart utters these few words, you know that this was a defining moment for him and his project. Before long, Ron Miller had become a co-producer of the film, as did one other individual, Melvin Schuetz, the latter not only “a walking encyclopedia of Bonestell paintings” but also the author of “A Chesley Bonestell Space Art Chronology.” 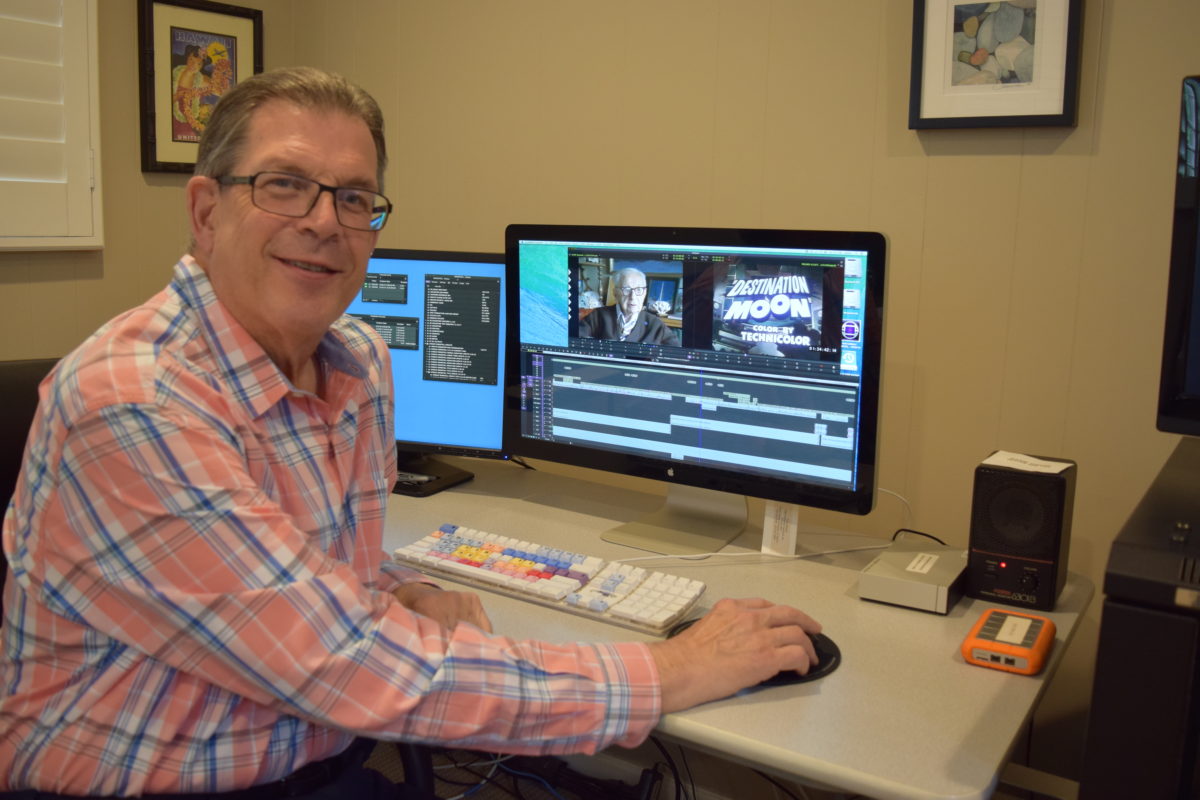 The search was on
In the film, which this author was the first journalist to see in its entirety, there are numerous men and women who are interviewed on camera and some, like Ray Bradbury, who had previously been filmed sharing their thoughts about Chesley Bonestell.
Ron Miller’s books provided many of the initial leads with regard to which people should be contacted, and this largely supplied the narrative foundation the film was to follow. But there were also certain moments of serendipity whenever someone suggested yet another person to follow up on, a man or woman of whom neither Miller nor Stewart had been aware. Space artist Don Davis, for example, referred the filmmakers to a person in Florida who had footage of Bonestell, and whose video clips were then pulled from storage. That’s the kind of legwork needed, and as Stewart puts it, “There’s a lot of wonderful archival footage and also recordings that had never before seen the light of day.”
I might add that there were heartbreaks, too, and that, says Stewart, is “part of the journey of a filmmaker making a film like this.” In other words, there were instances of someone saying they had or thought they had recordings or home footage only to be unable to find it, or else there were people purported to have such material who could not be located.
As for letters, apparently there weren’t that many. But on the other hand letters are often deemed ephemeral, and if not by the recipient then by the recipient’s next of kin. Bonestell had one daughter, June, who was born in 1912, but she died in 1989 and there don’t seem to be other surviving close relatives. 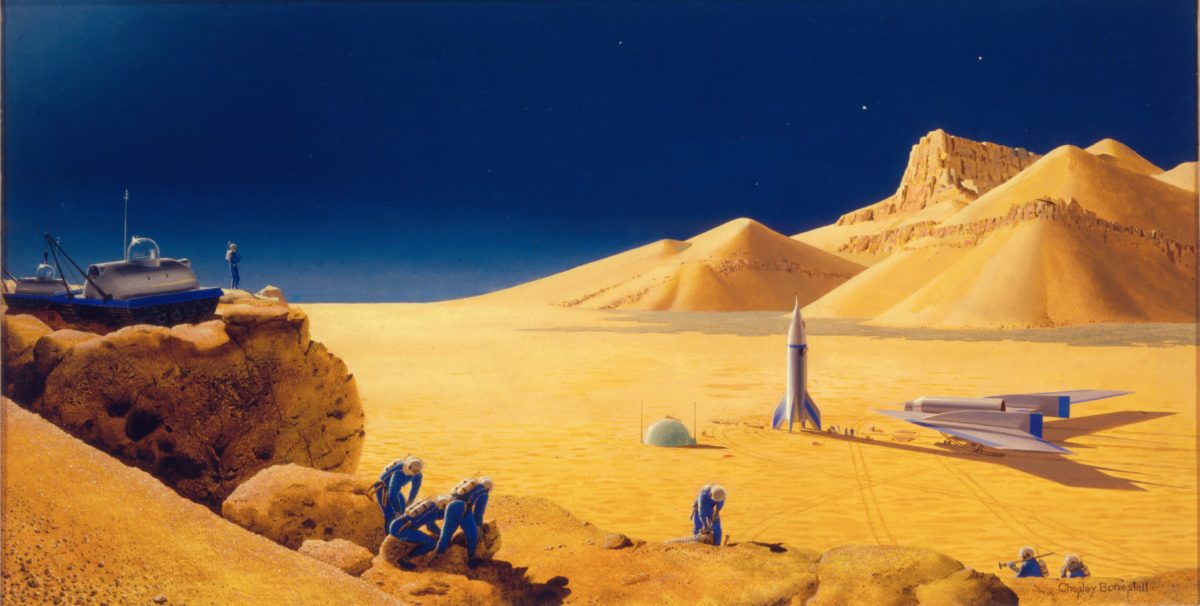 And then the artwork itself. Melvin Schuetz had told Stewart that Bonestell painted in the neighborhood of 3,000 pictures. While the whereabouts of many of them are known, “there are probably paintings that will be discovered by people, somewhere,” and that’s even more likely if Stewart’s film is viewed by a fairly wide audience. In fact, after contacting Julie DeVere, head curator of the Filoli Center in Woodside, she did some some searching on the premises and located folders containing Bonestell sketches. “These are the little miraculous things (that can show up),” Stewart says. “Ron Miller was totally amazed when he saw them.” And, naturally, wished he’d known about them when doing his own research. Of course that leads to another question: Is Miller thinking of doing a revised version of his Bonestell book?
“He and I have been talking about that for quite a while,” Stewart replies, and the short answer is that a few publishers have been approached but so far the fish aren’t biting. At any rate, Stewart adds, “My mission has been to finish the film with (the aim) that we could have a companion book at some point. It is my hope that the film will spark a renewed interest not only in Chesley’s work, but in the whole exciting field of space art. Chesley wasn’t the only one, but he certainly was a very prominent figure in American art and in the history of the space program.
“This film is to introduce people to Chesley who never knew about him, but also to reacquaint those who knew about him, and to provide more details of his life, which was a very fascinating one.” 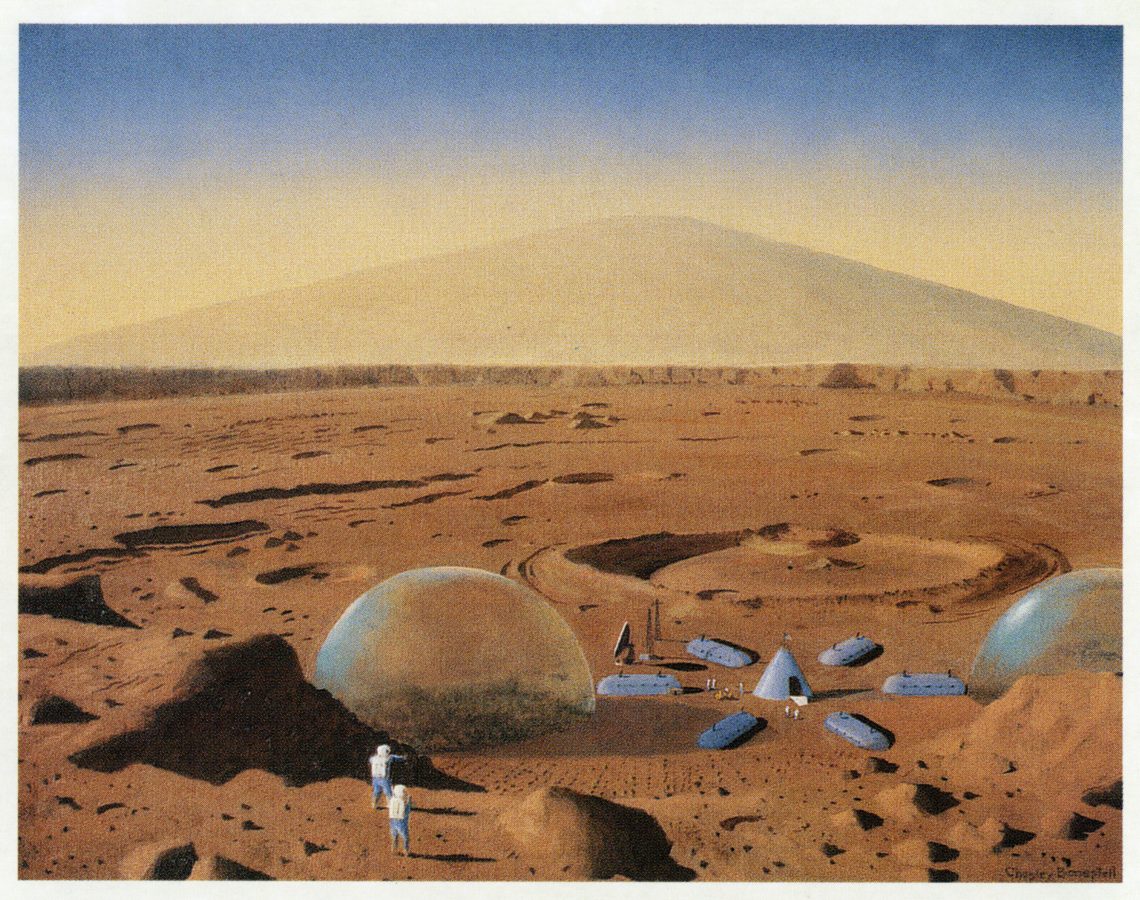 He took us there first
Filming began in March of 2015, with the initial shoot at the Adler Planetarium in Chicago where a special exhibition of Bonestell’s work was on display, including the stellar “Saturn Seen From Titan” (1944).
Stewart describes some of his travels, up and down the California coast, but also to Massachusetts to interview Doug Trumbull, who was the special effects supervisor for Kubrick’s “2001”.
“Documentaries take a lot of time,” Stewart points out, “and these people that are in the film all have schedules. Some of them took a year to get going, but it was worth it.” One interview in particular that lends weight to the project was with Irene Edwards, editor-in-chief of “Sunset” magazine, a national publication (now in its 120th year) that Bonestell contributed illustrations to in 1904, while he was still a teenager.
“These are busy people who run things,” Stewart says. “It’s persistence. This was not an easy film to make by any stretch of the imagination.” Furthermore, “I am a perfectionist; everything has to be right, spot-on.”
You must have accumulated more footage than you were able to use?
“Yes,” Stewart replies, “and we’re making some really crazy bonus features for a hoped-for DVD. But the timing of the film really is amazing. We’re right on the cusp of the 50th anniversary of landing on the Moon.” And, just recently, “It was the 50th anniversary of the release of ‘2001: A Space Odyssey.’ So that little story from Doug Trumbull is very timely.”
Long before the Mercurys and the Apollos, Bonestell took us into outer space. You’d have thought he was the first astronaut to reach the planets, his work was that convincing. Wernher von Braun, the creator of Germany’s V-2 rocket but also one of the fathers of the U.S. space program, was a friend and colleague. After visiting Bonestell in Pasadena to see new paintings by the artist, von Braun told him, “As usual, those hours in your studio were an unforgettable experience. I feel almost at home on Mars now.”
In 2005, the inductees into the Science Fiction Museum’s Hall of fame were four of the most renowned people working in or having worked in fantasy and science-fiction: Steven Spielberg, Philip K. Dick, Ray Harryhausen, and Chesley Bonestell. What better company was there? 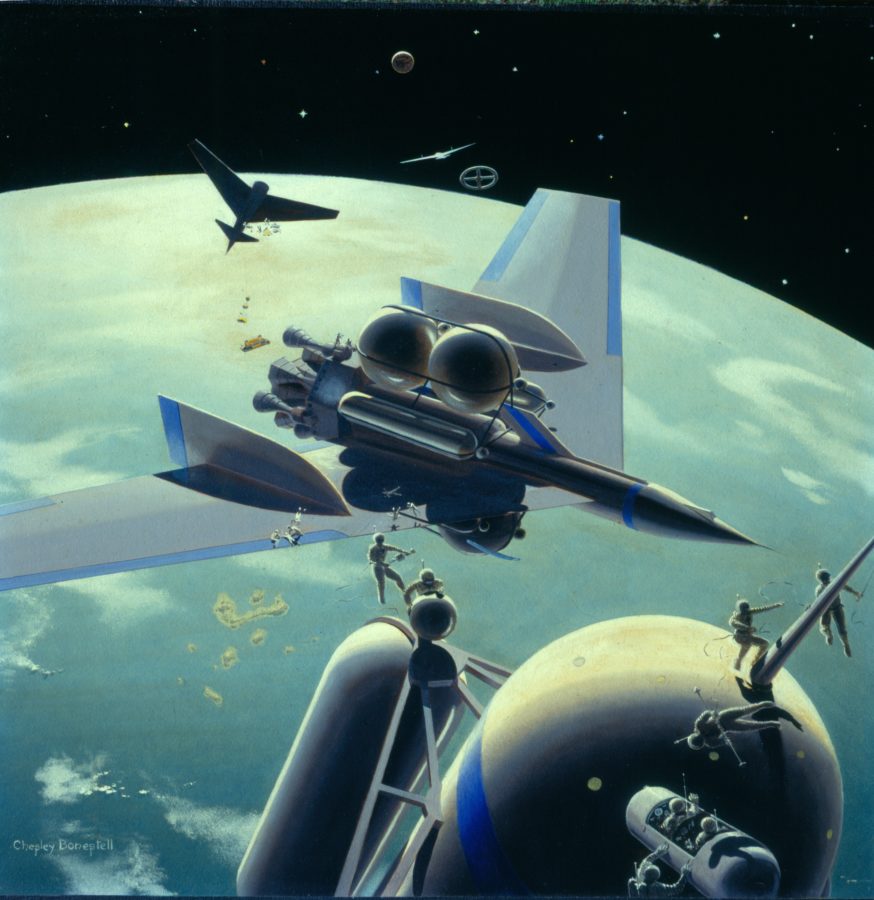 “Assembling the Ships for the Mars Expedition” (1956), by Chesley Bonestell

As for his new, in-depth documentary film, Stewart says, “What I hope it will do is what his paintings have done, which is to inspire people to develop an appreciation for all the stars and planets and our journey as space explorers. My feeling is that the history of the U.S. space program has to be incorporated in the history of Chesley Bonestell because he was a part of it from the beginning.
“People hear his name or they see his paintings and they say, Well, is he still alive? He’s a forgotten part of American history and a very important one, in many fields, in architecture and the arts and filmmaking, and in the exploration of space.”
Chesley Bonestell: A Brush with the Future, a feature-length documentary by Douglass M. Stewart, Jr., premiered Tuesday, May 1, but screens again at 2:15 p.m. this Thursday at the Newport Beach Film Festival. The location is the Edwards Big Newport 6, theater 5, and it’s at 300 Newport Center Drive, Newport Beach. Q&A after the film. ER

Chesley Bonestell: A Brush with the Future, Douglas Stewart