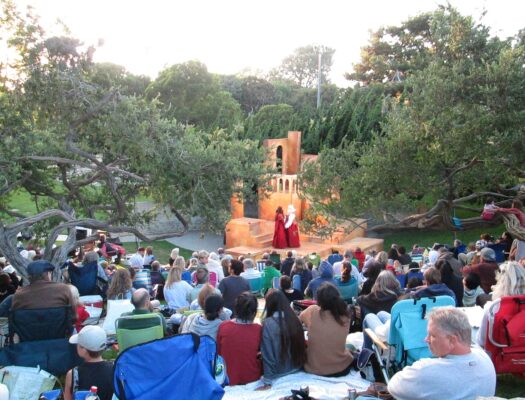 Accompanied by their worldly possessions, or at least a truckload of costumes, a motley group of actors has begun their annual summer pilgrimage through the Beach Cities and other towns near and not-so-far. Through August 16, the San Pedro-based theater troupe Shakespeare by the Sea is presenting “Hamlet” and “A Midsummer Night’s Dream.” The first is a tragedy, the second a comedy, so we can cry or we can laugh, but they would prefer – on alternate nights – that we do both.

This is the company’s 17th season, and each year two works from the Shakespearean canon are presented, at no cost to the public. This summer there are 41 shows in 22 locations.

Stephanie Coltrin is directing “Hamlet,” with Cylan Brown in the lead role as the unsettled Prince of Denmark who is perennially faced with the question of whether to be or not to be. Although there are sponsors, and some cities do offer a stipend, it’s really the audience that keeps the Bard’s boat afloat.

“The reason we’re here is because they’re here,” Coltrin says.

“Yes,” Coltrin continues, “we always say this is the most expensive free show you’re ever going to see.” 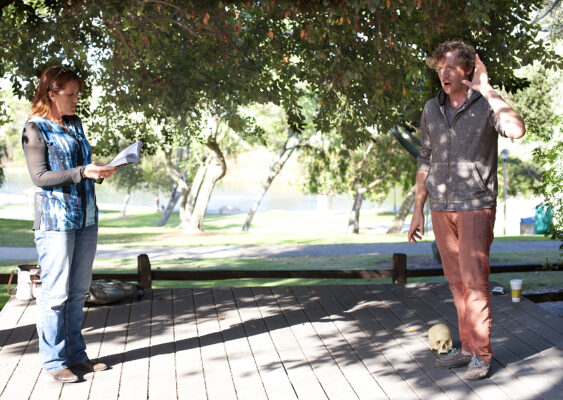 On the cutting block

Coltrin and Brown have collaborated on at least a dozen shows altogether, going back to their days at the Hermosa Beach Playhouse, and this is their seventh or eighth Shakespeare. They have a good rapport and speak the same language, in this case Elizabethan.

Every year several possibilities (“Macbeth”? “Othello”?) are bandied about. Last year two lesser-known works were presented – “King John” and “All’s Well That End’s Well,” and so “Hamlet” was selected in part for its name recognition, and also for the fact that the company hadn’t staged it in a very long time.

Every play comes with its challenges, and for Coltrin the major obstacle with “Hamlet” was its length.

“It’s four-and-a-half hours at full-length,” she says, “and ours has to be two hours with intermission.”

“The other thing I was intently focused on,” she says, “is the fact that so many of these lines are famous, regardless of whether people know they’re from ‘Hamlet’ or not. If there was a famous line I had to find a way to keep it in there – so I think that was the biggest challenge for me.”

If you’re an astute reader, and I have no reason to be a Doubting Thomas, you’re thinking: Aren’t there abridged versions of “Hamlet” available on the black market?

“There are many,” Coltrin admits. “Anytime I do Shakespeare I like to do my own cut, because I feel strongly that if I start with somebody else’s cut then I’m going to get distracted by their pieces of the story, and I want to keep their vision out of my head and stick to what I’m trying to do. Yes, it would have been easier because there are many [available versions], but I did not do that.”

My solution to the problem is to have the entire cast say their lines as fast as possible: Two hours, no cutting, voila!

Coltrin laughs. “Everybody just talk fast and nobody walk anywhere.” 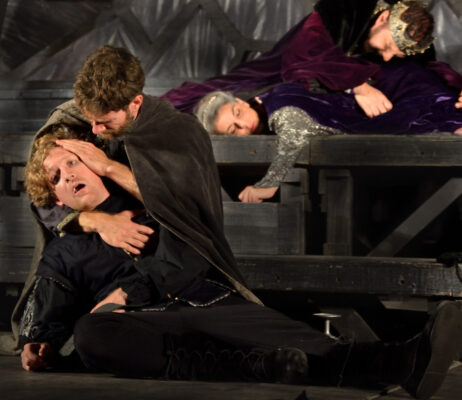 Now, remember, there are 22 venues, and they have many different backgrounds and seating configurations. For this spectator, seeing “Hamlet” performed at Point Fermin, just above the cliffs and under trees that date to the Devonian era, enhanced the mood greatly.

“Every mood has its own charm and its own experience,” Coltrin says, “which is why we have people come see the show at multiple venues.” It also affects the performances in subtle ways.
“When I’m giving the Hamlet soliloquy,” Brown says, “I always try to make eye contact with one or two people in the audience to kind of help ground the performance and make a connection from Hamlet to the people who are watching.”

While he’s not as tough as Shakespeare, thank goodness, Shakespeare’s English is a far cry from ours. Should the unprepared theater-goer be worried?

“One thing for them to know,” Coltrin says, “is that we focus intently on making it very clear and very story-friendly. You will absolutely know what’s going on.”

Brown reassures us as well: “You really get the story, you get the drama, you get the tragedy, you get all the weird kind of supernatural ghostly stuff.”

There are a couple of other things that help clarify the story, the first being the use of period costumes. Shakespearean productions have often been rerouted and set in places from Cuba to Japan, and probably on different planets, but as Coltrin says, for a general audience why confuse the issue?

“Because we don’t have lighting cues or smoke machines,” she explains, costumes help to give the work a little more credence and immediacy. “Nobody wants to look at an actor playing Hamlet standing there in a pair of black jeans. They’re gonna be like, ‘What’s the matter, you run out of money?’ So, when you’re 60 feet away, we want to see Hamlet in a doublet and fancy things.
“Part of it is keeping in mind how big some of the parks are. If you’re far away, the costuming needs to help define that. So we tend to shy away from modern dress productions.”

Yeah? And what does Hamlet himself have to say about that?

“When Shakespeare was writing,” Brown says, “there was a really strict social hierarchy.” The classes dressed differently, and the guy in the burlap sack was probably a peasant and the guy with the crown and the ermine collar was clearly the king.

The costumes also help the actors to get into character.

“Your posture changes,” Coltrin says, to Brown himself as well as speaking generally. “When you put on your boots and your cloak (we) can watch their physical posture change and they don’t even think about it.”

There’s another thing that helps put “Hamlet” into focus, and that’s the music, which Coltrin spent hours piecing together from various sources.

“It all ties back into that idea of trying to tell the story effectively,” Brown says, “another way to cue people in to what’s going on onstage. If they’re not getting it through the language [they] hear those minor chords and all of a sudden you know something spooky or something somber is going on.

“It’s all kind of designed to help bring the audience into (our) world and help them understand where they stand in the story.”

I think he’s right. In the blink of an eye, under a star-filled night sky, we’ll find ourselves in another century and in a faraway land. 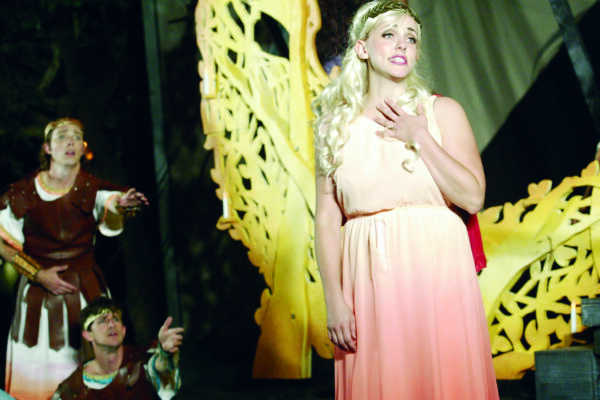 What: Shakespeare by the Sea’s touring production of “Hamlet” (HL) and “A Midsummer Night’s Dream” (MS)