Beach business – Round peg in a square hole 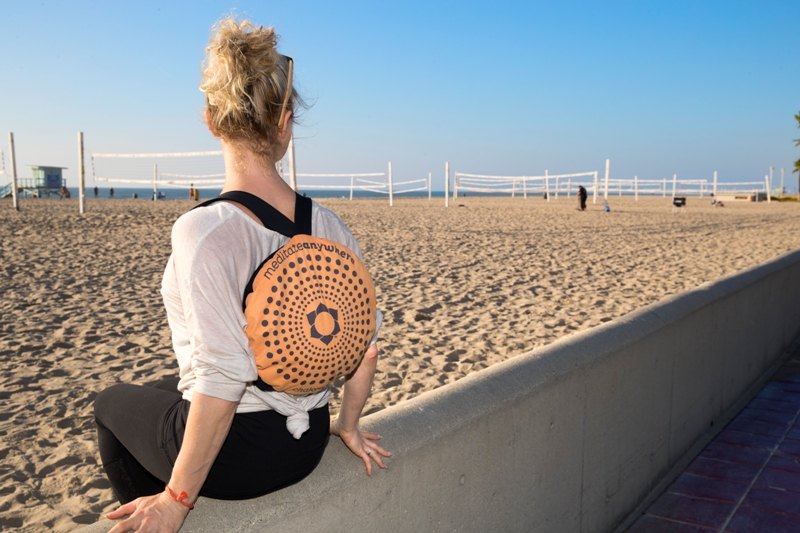 Evanna Shaffer was in the midst of a “lifequake.” After the onset of the recession, Shaffer had formed a business with her then-husband. The firm focused on finding jobs for people in the cybersecurity and electronic forensics fields. But two weeks after the business launched, her husband said he no longer wanted to be with her.
Shaffer dealt with the blow by developing a deep yoga practice, and engaging in daily meditation at the end of the Hermosa Beach Pier. Around that time, she also began having dreams with circles as a recurring motif.

Drawing from her art school background, she set out to make something. She began tinkering with designs, feeling her way through as she measured and folded various materials. She worked entirely out of local coffee shops. People would pass through and gawk in curiosity. Interest in her and her creation began building without her even being aware of it.

The result is Chakya, a line of circular yoga and lifestyle products linked by their round shape. Shaffer’s goal is that the circular Chakya can soften the edges of how people view yoga — to upend the increasingly popular perception that it is a set of poses to hold with militant rigidity.

“And that’s when I had this epiphany,” she said. “Not everybody can do all of the poses, but everyone can be inspired by that feeling you get after practice.”

Those who have worked with Shaffer describe her as a tireless worker, and she does not shy away from her entrepreneurial ambition in conversation. But at a time when even the basest of Silicon Valley startups gild their efforts with the language of making the world a better place, Shaffer comes across as a true believer.

Her first product, the Chakya Go, is a combination meditation cushion, towel, mat, blanket and backpack. Folded up, it resembles a small pillow, but it’s pliable enough to hold a laptop or a volleyball. Shaffer is fond of taking it with her on airplanes, preferring its microfibers to the typical “cootie blanket.” She recently concluded an IndieGogo campaign for the product, and is tirelessly pitching it in the area, while working with residents of the South Bay for every aspect of the business.

It’s the start, she hopes, of something much bigger.

“Hermosa has so many fitness and yoga lovers. I want to launch a whole new movement, and I want to do it from right here,” she said. “ 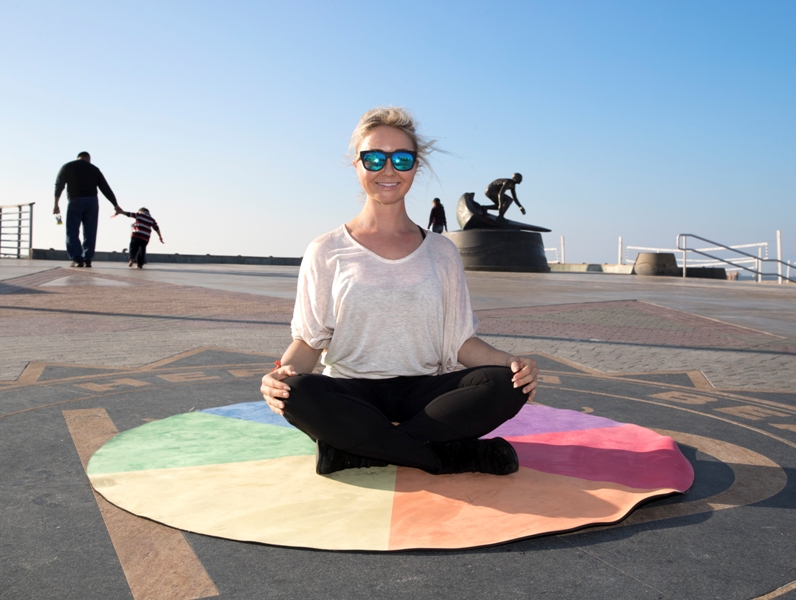 Evanna Shaffer with the round yoga mat at the Hermosa Beach pier, where she was inspired to create the mat. Photo by Brad Jacobson (CivicCouch.com)

Life moves in a circle

Shaffer grew up on a farm in upstate New York. She lovingly describes her parents as “artists and hippies.”

“There were no sweets. And everything mom cooked came from our ground,” she said.

She left home to attend to art school outside Philadelphia, then decided to head to school in London. She didn’t have enough money for tuition when she left but, in a manner that reveals much about her world view, assumed things would work out. On arriving, she got a call from her mom, informing her that she had won a long-shot scholarship she had applied for; a $10,000 check was sitting in the mail. She had always dreamed of ending up by the Pacific Ocean, and an apprenticeship with a Malibu-based artist brought her to Southern California

“There’s a certain amount of research and planning, but sometimes you just have to go for it,” she said.

Her sentinel-like presence on the Hermosa Pier helped her get her project off the ground. In the project’s early days, she was reaching out to various manufacturing firms to see who could meet her demands for a uniquely designed, responsibly sourced product. Among those she contacted was Sean Saberi, who runs FabFad, a customized textile printer based in the Arts District in downtown Los Angeles. As the two started talking, Shaffer said, Saberi revealed that he was a Hermosa resident, and recalled seeing her meditating on the pier.

Saberi, who also runs a company called C Print, said his businesses are designed to handle everything needed for manufacturing, from patent advice to marketing, leaving their clients free to focus their creative energies on design. Combined with its made-in-the-U.S.A labor practices and willingness to use sustainable materials, Shaffer was sold.

Although Saberi said the firm has large accounts such as Under Armor, he estimated that 50 to 60 percent of his clients are startups. His business has worked with major yoga brands, including the El Segundo-based Manduka.

Shaffer’s vision demanded a lot of back-and-forth; he estimated the current Chakya Go is the result of eight production cycles.

All the time that Shafer spent meditating by the ocean seems to have sunk in. Saberi makes some of Shaffer’s products from a polymer derived from refuse, like plastic water bottles and fishing nets, that wash up on shore. The two plan on rolling out more products in the coming year, including a line of yoga pants.

Shaffer, Saberi said, manages to combine the creativity of a designer with the focus of an entrepreneur.

“She’s a great artist, and very high energy, but she’s also definitely on top of stuff all the time,” he said.

Roughly translated from Sanskrit, “Chakya” translates as “to awaken from within.”

The next product in the line is a circular yoga mat. Almost all yoga mats on the market are rectangular, something that Shaffer muses may be related to a desire to fit as many people as possible into a yoga studio.

“When I’m on a linear mat I feel like I’m a little soldier,” she said.

Her circular, color-wheel mat is based around the chakras, an idea in the yogic tradition that posits there are seven different energy centers in the body. Each chakra is linked with a color, a part of the body, and an aspect of the soul. For example, the fifth chakra, located in the throat,  is blue, and signifies communication.

Shaffer’s circular mat is split up into six colored segments, and a white circle, for the seventh “crown” chakra, in the center. The colors are arranged to provides reminders for practice, she said, that may elude someone on a traditional mat. For example, based on the way the colors are arranged, if she is overdoing core work, associated with the yellow chakra, it will be difficult to occupy the purple part of the mat, that signaling the chakra responsible for intuition.

“The chakras are always displayed in a linear fashion,” Shaffer said. “But it makes so much more sense to me this way. Doing it in a circle unlocked so many mysteries.”

Among the idea’s proponents is David Romero, a prominent local yoga teacher who also leads regular sound baths. Shaffer assisted Romero when he gave a TEDx demonstration on sound healing, and often shows up to offer the Chakya Go as a cushion at his regular offerings.

“I’m a huge believer in it. I look at things from the perspective that the human body is one big vibrating piece of material made of earth elements of different densities. She sees things through color, which is also a vibration. It’s just further up the spectrum of light,” Romero said.

The goal, Shaffer said, is ultimately to use the mats as part of specialized classes she has designed. The energy flow would resemble a traditional yoga class, with a gentle beginning, a peak in vigor near the middle, and gradual comedown. But Shaffer describes the experience as something closer to a Disneyland ride, with the ultimate goal of getting people to soften into the bliss of meditation. She’s currently looking for a space in the area to launch the effort, and is also pitching existing studios to let her try it as a workshop.

Shaffer knows that getting people to see new things in a discipline that is thousands of years old will be difficult. But her attitude lifts her high enough that she can see it becoming reality.

“By the time we finish, you should be feeling as though you are above the clouds,” she said. ER