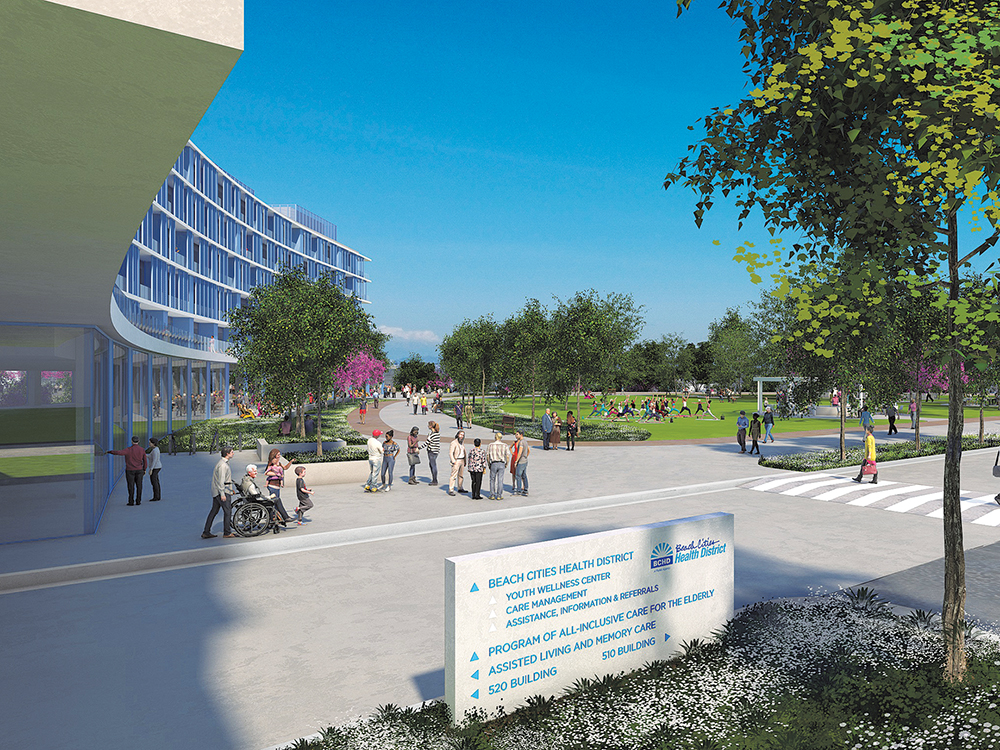 The "allcove"" youth wellness center is slated to be part of the proposed Healthy Living Campus. Rendering courtesy of BCHD

The Healthy Living Campus Environmental Impact Report was certified by a unanimous vote of the Beach Cities Health District last Wednesday, clearing the way for board consideration of the $375 million project’s 11-acre master plan.

The board could vote on the plan as soon as October or November, according to Beach Cities Health District CEO Tom Bakaly.

Further public input will be solicited during a half-day strategic planning meeting Oct. 15, and through community surveys.

The Healthy Living Campus would replace BCHD’s current facilities with 220 residential elder-care units, a new fitness gym, a demonstration kitchen and meeting and research facilities. A Youth Wellness Center is also proposed, along with 2.5 acres of open space for exercise classes and gatherings.

During the Sept. 8 virtual meeting, the board listened to callers’ comments and a dozen written submissions read into the meeting record.

All but one were in opposition to the project.

More than 300 comments were previously submitted, and included in the EIR, including 127 from resident Mark Nelson, a former member of the BCHD Community Working Group.

“Now that we’ve certified the EIR, with the community’s help, we will turn to more of a policy discussion,” Bakaly said the day after the meeting.

“You’ve forgotten the people,” said Susan Yano. “I’m speaking for my neighbor across the street with leukemia… The dust, the noise, and all the other aspects of this project.”

Sheila Lamb, of Redondo Beach, said the need is for low to moderate-rate housing, not market-rate.

Oscar Martinez, of the City of Torrance Development Department, said the BCHD’s responses to Torrance’s questions were inadequate, particularly regarding the project’s impact on Flagler Lane residents.

Torrance had asked to have the project moved west.

Melanie Cohen focused on another aspect.

“From day one, it’s been the same question. Does Redondo Beach need $12,000 a month assisted living?” she said. “Unfortunately the emperor still has no clothes. Please don’t certify the EIR.”

Lori Plesz said the noise study in the EIR was done at the wrong time of day, and traffic and noise would be above safe levels

Linda and Joe Zelik, 35-year residents of Torrance, said they are  “vehemently opposed” to the “six-story petri dish.”

Torrance resident Abes Khani told the board he listed his house for sale in 2019, but then was advised to wait out the decision on the Healthy Living Campus.

Jeanne Sinsheimer had a question.

“Who on the board had the certifications to approve the EIR?”

“It’s way too large and too close to housing in Torrance,” wrote Linda Kranz, continuing to cite “unhealthy particulates” and environmental issues going on statewide.

“This is something we control in our own backyards,” she wrote.

Mark Miodovski asserted the noise estimate by EMT sirens in the EIR was low.

“A 10-second estimate (for a siren) was absurd,” he said. “ … Hypocrisy is  rampant in the EIR document.” He added that it “contains numerous errors and misstatements.”

Mary Ewell, of Redondo Beach, said the project “ is a giveaway of land to a largely white-privileged class.”

Former Redondo councilman Joe Dawidziak objected to the project because, he said, “This board is far from its original mission of the South Bay Hospital District … What it does now is noble work but not in its original charter. Voters in 1955 weren’t voting to tax themselves for yoga classes and gym memberships.”