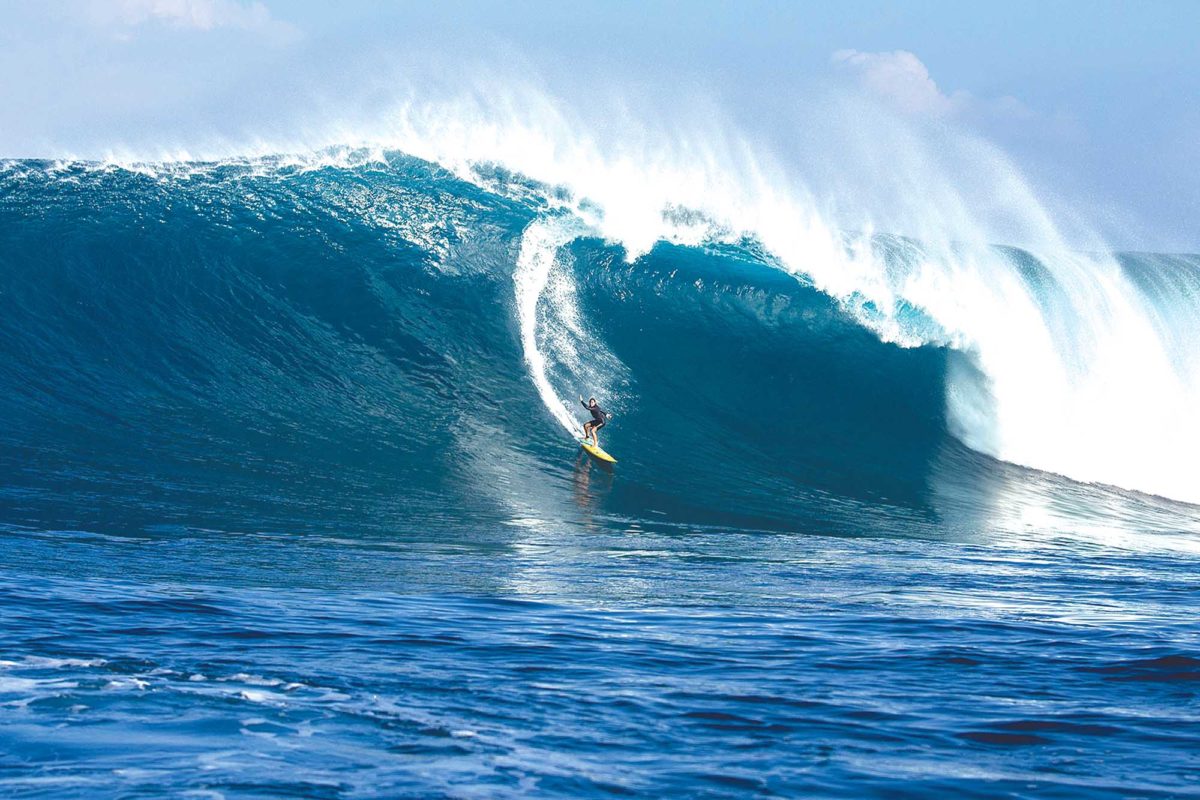 The sun was sinking behind surfer Alex Gray, illuminating the Beach Cities and Palos Verdes Peninsula surf breaks, where Gray has scored some pretty sizeable waves. But some far bigger waves were about to unfold right behind him, inside Redondo Beach’s Seaside Lagoon.

Gray had the honor of presenting the men’s biggest paddle award, the first honor given out at the World Surf League’s Big Wave Awards Thursday night. With awards like Ride of the Year and Wipeout of the Year, the annual ceremony functions as an Oscars of gnarliness, bringing out the world’s best big wave riders. 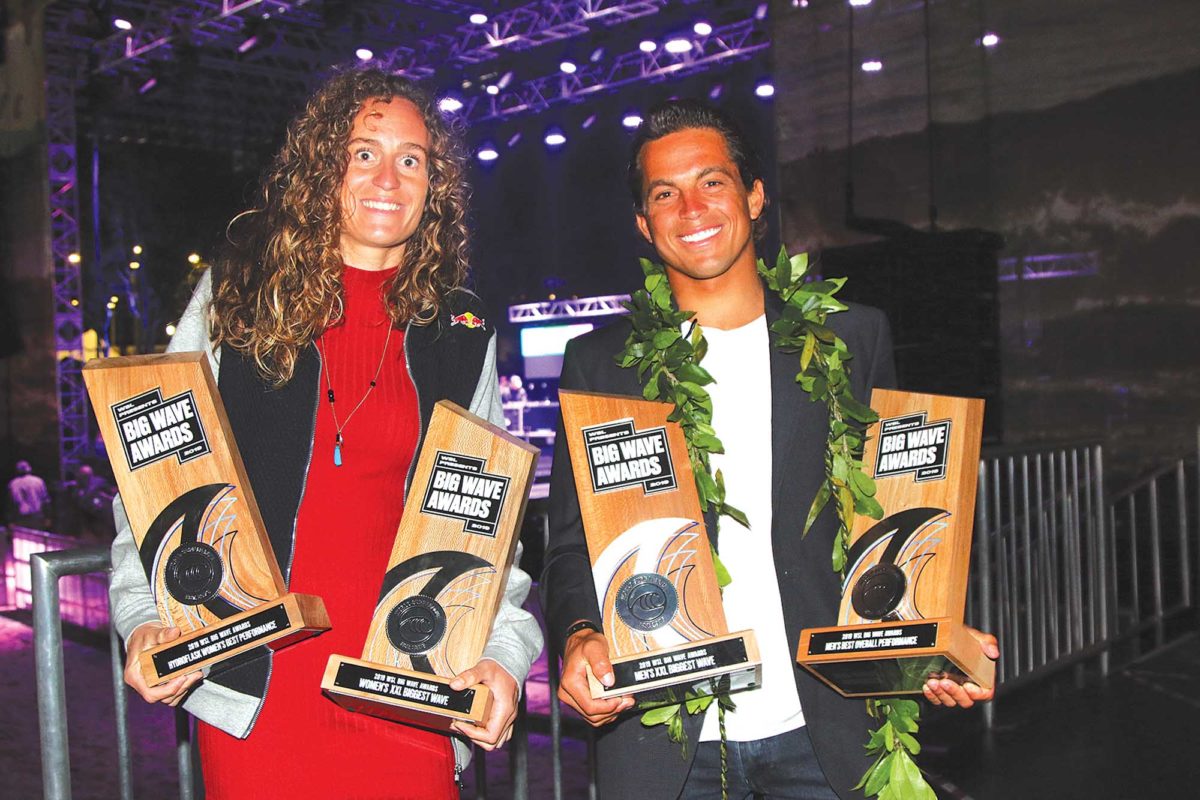 This year marked the first time the awards have been presented in the South Bay. Trophies were handed on the Low Tide stage of the Beach Life Festival, which hosted the Big Wave Awards the night before the musical performances were to begin.

“It’s a beautiful place: thanks for having us,” Gray said.

Gray presented the men’s biggest paddle award to Grant “Twiggy” Baker for a massive wave at Jaws on Maui. The South African, who would also receive the coveted Ride of the Year award, also for a wave at Jaws, has been a frequent winner. He devoted a portion of his time on stage to what goes on behind the scenes to make big wave surfing competitions possible.

The big wave tour has seen even more changes in recent years than the Championship Tour, which is also owned by the World Surf League. Both organizations are subject to the whims of the ocean. But in order to take advantage of the massive storms needed to generate the waves required for its events, the big wave tour sets event “windows” that are months long, but has to rally contestants and set up infrastructure with little notice. In 2016, an especially active Pacific Ocean allowed the BWT to run six scheduled events. For the past two years, however, it has scheduled only three events, and held just two: the Nazare in Portugal and Jaws. 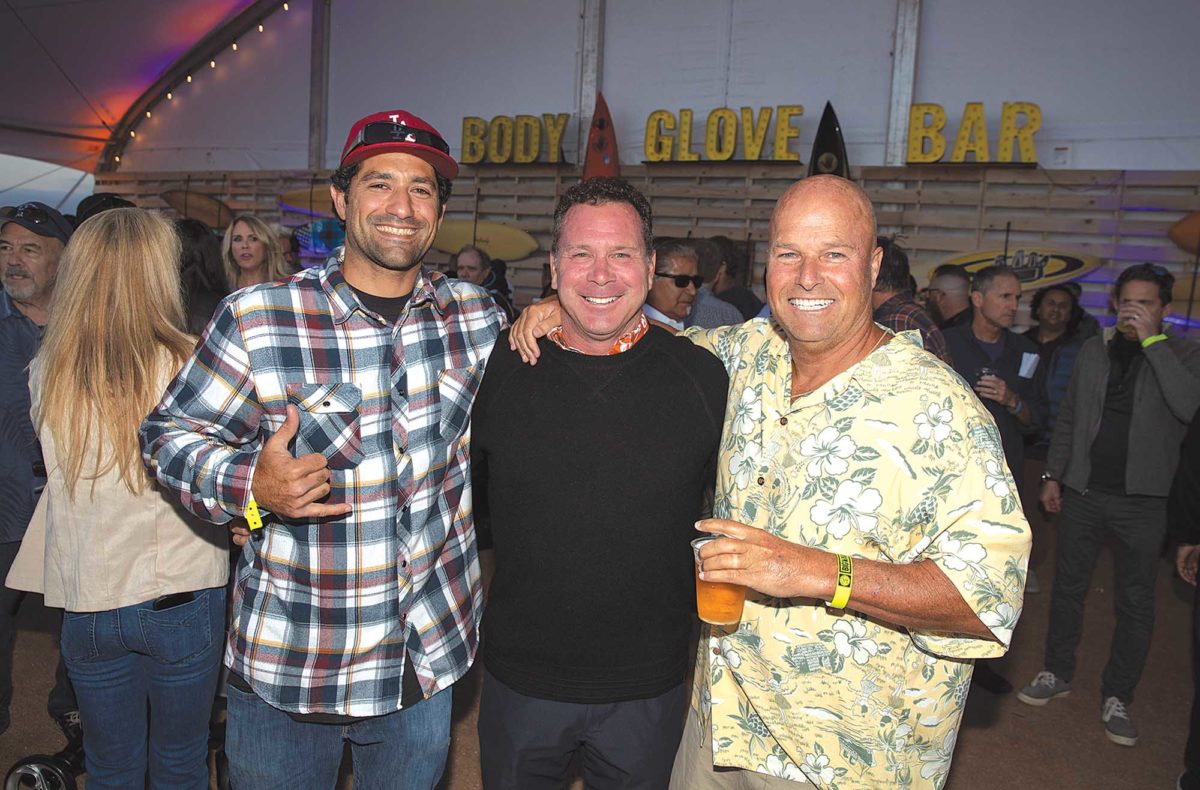 The third event, at Maverick’s in Half Moon Bay, was acquired by the WSL in 2017. In 2015, the WSL’s previous attempts to acquire the harbor permit for the event spawned a feud with the former organizer, Cartel Management, and resulted in Baker and other athletes being barred from the contest. In his acceptance speech Thursday for the men’s biggest paddle award, Baker said that although he and the WSL have had “differences of opinion from time to time,” he was grateful that the organization was giving him and other athletes a chance to compete.

“It’s a rare type of pursuit in our age of greed and power. Let’s keep it core,” Baker said. 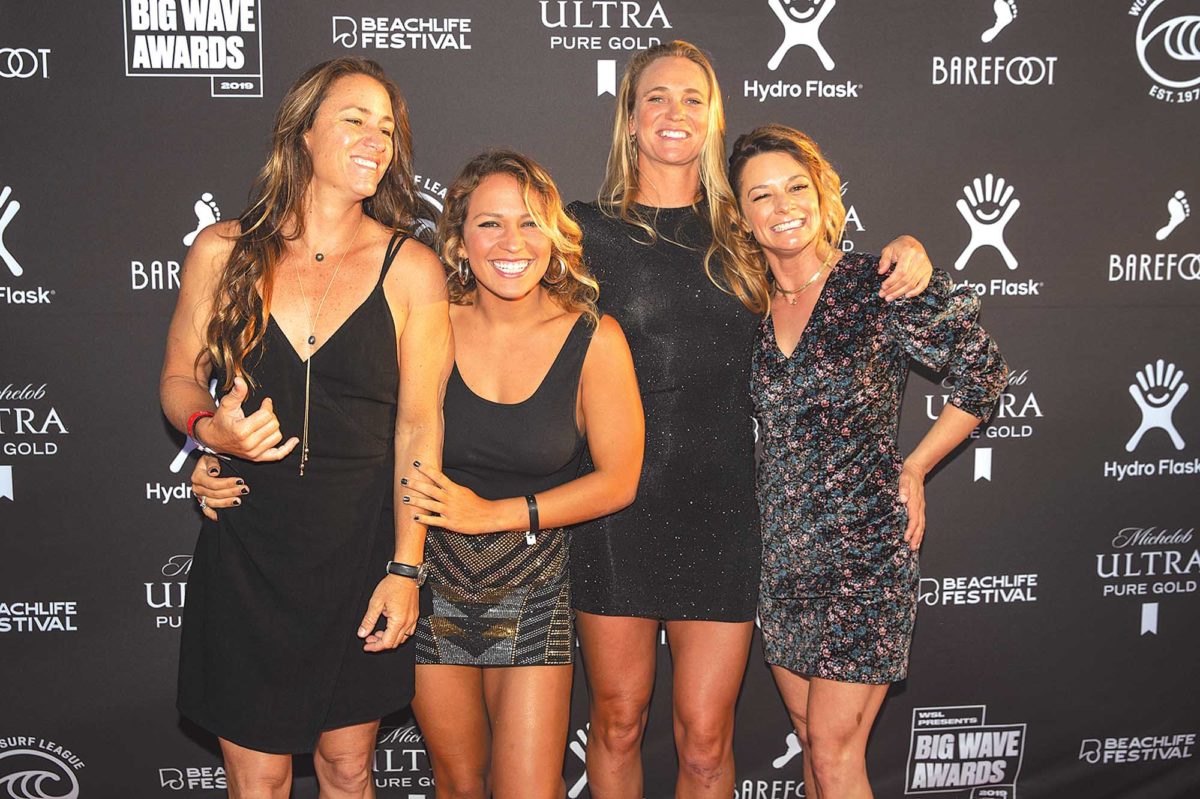 One of the event’s few dark moments came when surfers reflected on the fate of professional surfer Sunny Garcia, who has been in intensive care since last week. Garcia has made occasional appearances at the Redondo Breakwall over the years, demonstrating a comfort in conditions of consequence that impressed regulars at the South Bay’s most dependable big wave spot. In recent years, Garcia has also talked about his struggles with depression, and some at the event said that although pro surfers may seem indestructible, they hoped that there could be greater openness about mental illness to encourage people to seek help. Makua Rothman, who collected the wipeout of the year award for a tumble inside a giant Cloudbreak barrel, closed his acceptance speech by urging, “Pray for Sunny!”

Justine Dupont of France was another big winner for the evening, taking both the women’s biggest wave award and the women’s overall performance award. In an interview after the show, Dupont, who is also a women’s longboarding champion and competes on the French national team, said big wave surfing may look like one person alone on a wave, but a lot more goes into every ride.

“I really didn’t know what to expect. It’s so great to get the recognition, and I’m very happy, but it was a little weird to be up there all by myself. It would not be possible without my team,” she said.

The evening was an opportunity for the WSL to show off its decision last fall to equalize the pay of male and female athletes, becoming the first U.S. sports organization to do so. Andrea Moller, who won the evening’s women’s biggest paddle award for a record-setting wave at Jaws, thanked the WSL for moving forward with the policy. 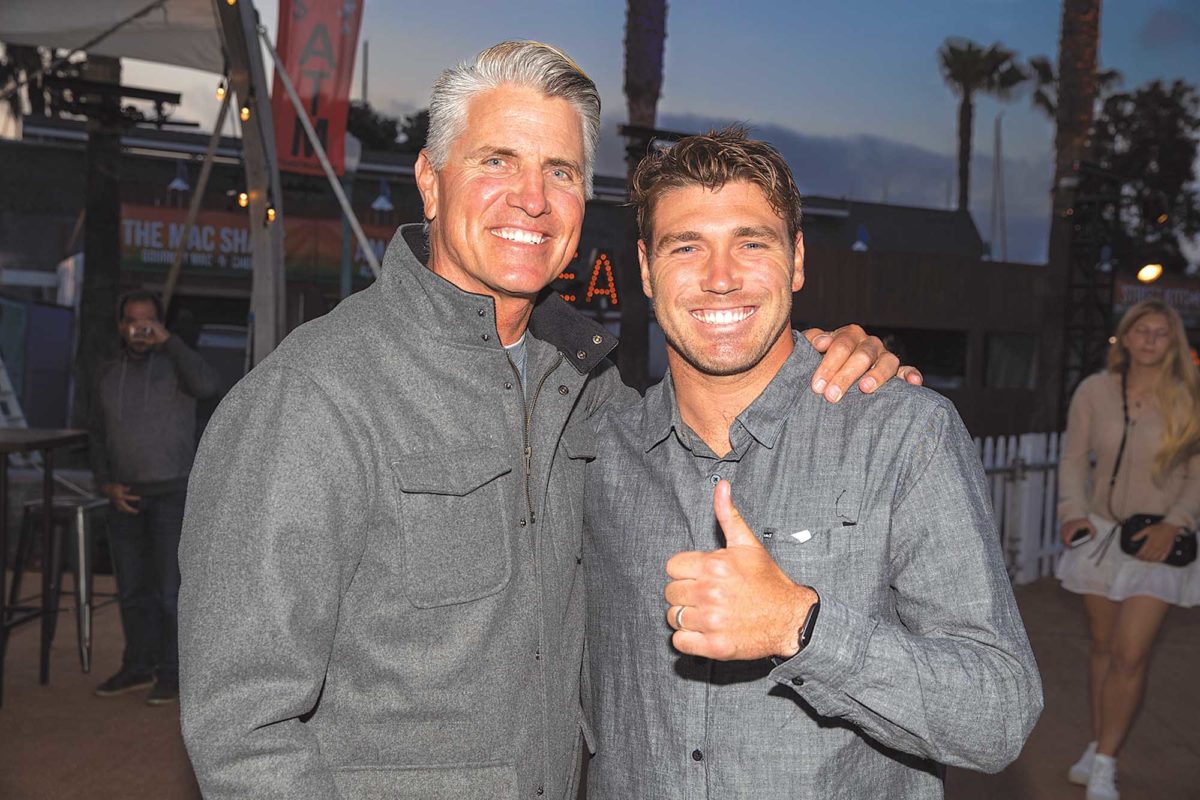 Back when Cartel was still running the Maverick’s event, the California Coastal Commission threatened to deny a permit for the event because of its failure to include women. This helped push women’s big wave surfers to the fore of the push for equality. In a story in the New York Times Magazine earlier this year, big wave surfer Bianca Valenti and others said that, during a 2018 meeting with WSL CEO Sophie Goldschmidt, they sought equal pay for women at the Maverick’s event, and that Goldschmidt resisted out of concern that the league would have to start paying women the prize money at all of its events.

Then in September, the WSL said in a surprise announcement that it would do just that, and the feeling at the awards again was more celebratory than divisive. In her remarks, Goldschmidt described the decision to equalize pay as the result of “extensive internal discussions,” and specifically thanked Valenti, along with fellow big wave surfers Moller, Paige Alms, and Keala Kennelly.

If there were an award for the surfer found in the most selfies at the event, it would surely go to Kai Lenny, who found time to pose with many young fans after taking home the XXL biggest wave award and the men’s overall performer award. (Lenny made time for those who have outgrown grom status as well, including Redondo mayor Bill Brand.) Friendliness came naturally to the Hawaiian big wave surfer, who said that the high stakes of the events made big wave tour members more apt to look out for one another than athletes in normal surfing contests.

“Big wave surfing is a tight knit community,” Lenny said in an interview after the awards.

Lenny’s biggest day of the season came on Nov. 26 last year, the day the Jaws Challenge got the greenlight. Organizers started running heats at the famed Maui break. But after a few heats, with howling offshore winds and maxing long-period swell, the WSL called off the contest as too big to paddle. It seemed like a good day to watch from the cliffs, and save strength for when the competition resumed.

But where organizers saw hazards, Lenny saw opportunity. Lenny had arrived with a quiver of boards needed to paddle the giant waves. He also had tow boards ready just in case. And with relatively few people in the water because the just-cancelled contest had reserved the space for the day, Lenny seized the chance to head out for a few tow waves. One of them earned him a nomination for Ride of the Year. In a clip that took surfing social media by storm, Lenny approaches the lip of a huge wave and seems to pause for a moment before redirecting and freefalling some 20 feet to seamlessly reenter the wave.

“In that moment, I was calling on my skills from just about every other sport: snowboarding, kite surfing, windsurfing,” Lenny said.