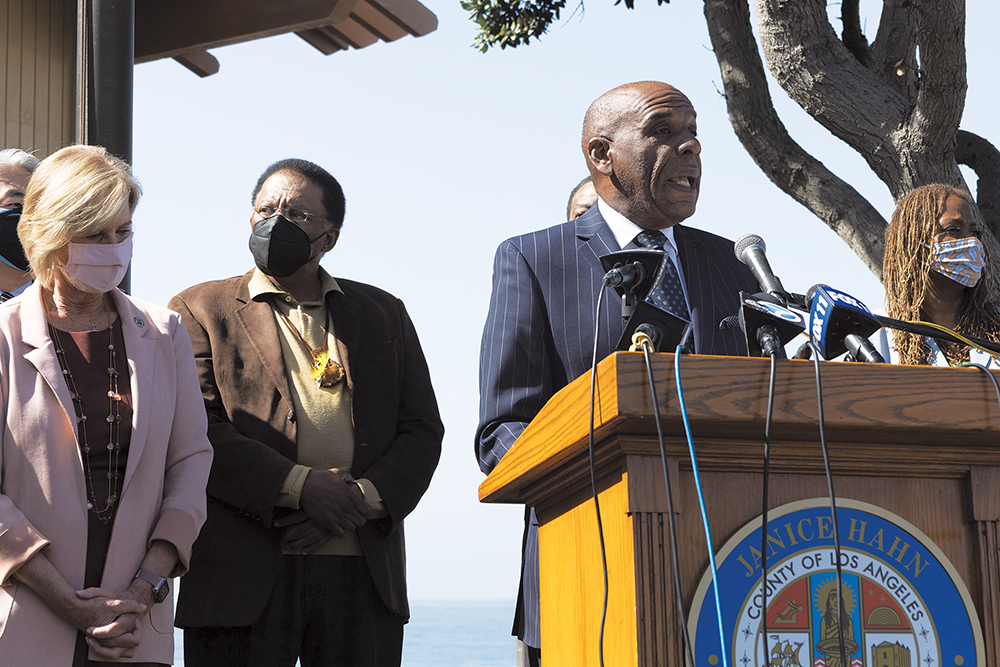 The legislation intended to pave the way for the return of Bruce’s Beach to the Bruce family reached the California Senate Floor Wednesday afternoon, and passed in a resoundingly quick and unanimous 37-0 vote.

Even supporters of the bill were surprised at the pace of SB 796’s progress. The bill passed through two Senate subcommittees with unanimous support last month and took only minutes to gain full bipartisan support on the Senate Floor.

“I want to thank our State Senators who voted for this important legislation and have supported Los Angeles County’s effort to return the Bruce’s Beach property to the Bruce family nearly a century after it was stolen from them,” Hahn said. “It is my hope that once this legislation is signed into law, Los Angeles County can set an historic precedent for how we as a nation should go about beginning to atone for the sins of our past.”

Allen said SB 196 “gives the County an important tool to rectify wrongs committed during a shameful time in our history when black property owners were not afforded the same rights and deference as white property owners.”

From 1912 to 1924, the Bruces operated a successful resort, one of very few places on the Southern California coast where Black people could come to the beach. It attracted a burgeoning African American community as a half dozen other Black families purchased adjoining land. The City of Manhattan Beach, concerned that what was known as “the Negro Problem” would “slow our progress,” as one city leader later wrote, condemned the land through the use of eminent domain. The city in 1948 gave the land to the state, which in 1995 gave it to the county.

SB 796, which was introduced by Bradford and co-authored by Allen and Assemblymembers Al Muratsuchi and Autumn Burke, addresses deed restrictions attached to the former Bruce’s Beach land that require only public use of the land. The language of the bill amends the state’s Public Resource Code to “except the requirement that the County of Los Angeles comply with all restrictions specified in the deed…” The bill, which is an urgency statute, also adds a new section to the code:

The Board of Supervisors in April unanimously voted in favor of initiating the process of returning the land, which is currently used as LA County lifeguard administrative offices. The Senate bill will now go to the State Assembly.

Kavon Ward, founder of the Justice for Bruce’s Beach Movement, said she was both surprised and pleased by how quickly the legislation was moving.

“I am elated beyond measure,” Ward said. “Also still in disbelief that my vision to have the land returned to the Bruce’s is coming to fruition so quickly. Also want to thank Senator Bradford for his courage and tenacity, and for shouting me out on the Senate floor.”

Chief Duane Yellow Feather Shepard, a relative of and spokesperson for the Bruce family, saw the workings of divine grace in the quick passage of SB 796.

The Bruce Family is grateful to God and the Senate for doing his will,” he said. “Senate Bill 796 that unanimously passed today is another step to return the land belonging to the Charles and Willa Bruce family. We are on our way to making history. The Senate had the courage to do what President Biden didn’t in Tulsa, take steps to right an obvious wrong by directly giving justice to the family. God’s work is never bipartisan and his representatives don’t do what they do to be popular. Here’s hoping that Manhattan Beach gets the message, that the people of California and the world want closure and Justice for the Bruce Family and they want it now.” ER