Breakwater: the early days Longboards, no wetsuits and already hierarchical 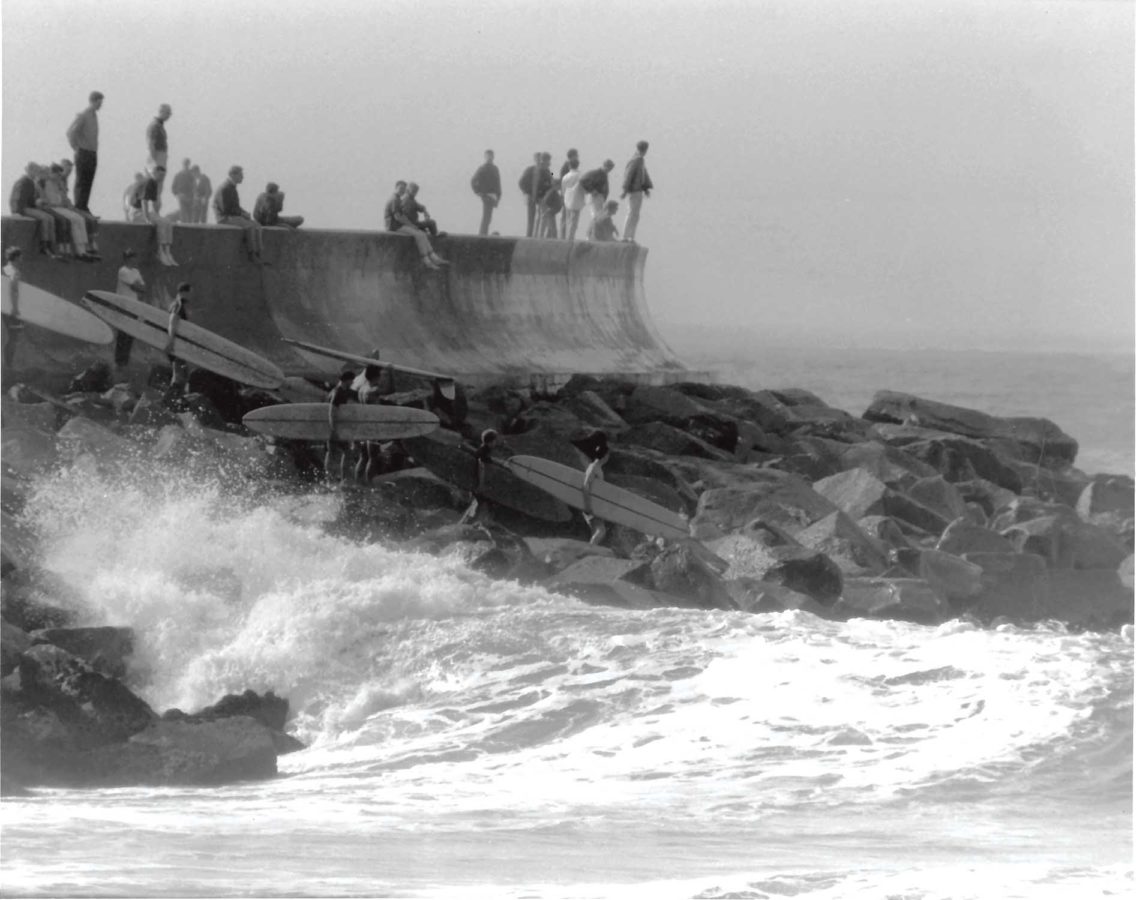 The first time I rode the Redondo Breakwater was the winter of ‘62. I was a 12-year old-grom. I paddled down from 30th Street in Hermosa. A lifeguard truck spotted me at 26th Street and followed me the rest of the way.

The Breakwater was a WPA (Works Progress Administration) project, begun during the Great Depression. It wasn’t finished until 1958, the year I began surfing.

I didn’t have a wetsuit, but it was love at first sight. Glassy, 6-foot lefts formed perfect peaks after bouncing off the rocks. The South Bay’s best surfers out. They were an unforgiving crowd and I caught just one wave before it got dark.

Grandma  Purpus lived on 4th Street. just back from the Strand. I went to her house to call my mom for a ride home. The following Saturday I was back, ready to walk out on the rocks and jump in. Hap Jacobs stopped me and asked what I was doing? I told him I was going to jump off the rocks. He said, “Not with that brand new board I just gave you. You get enough dings surfing the beach breaks. And if you can’t paddle out you shouldn’t be out there.” 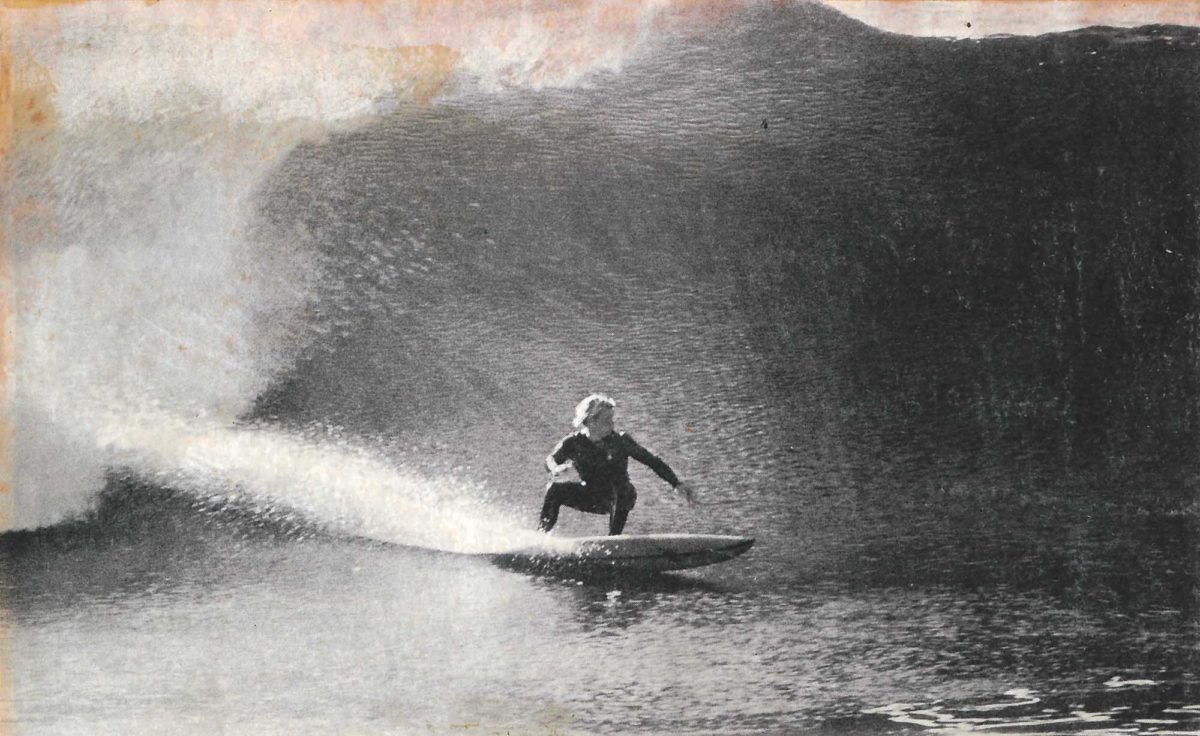 Mike Purpus, Redondo Beach Breakwater, February 1969. A 4-foot x 6-foot enlargement of this photo hung for many years in the Charthouse restaurant, which looks out on the Breakwater. Photo by Scott Miller

He told me to paddle out next to him, right next to the rocks. The sets bounced off the rocks to form the Breakwater’s famous wedge. But the wedge formed 20 yards away from the rocks, leaving a safer channel for passage out to the waves.

Over the decades Hap’s simple lesson would help me get out on a lot of big wave days.

The first year I rode the Breakwater John Joseph, Teague, Richie Collins, Bob Moore, Henry Ford, Tim Kelly, Sunny Vardeman, and Greg Noll were the standouts and would not let me near the peak. I would drop in behind them, next to the rocks and straighten out when they took off at the peak. I would do a spinner right before I straightened out. It was a crowd pleaser that got me noticed. 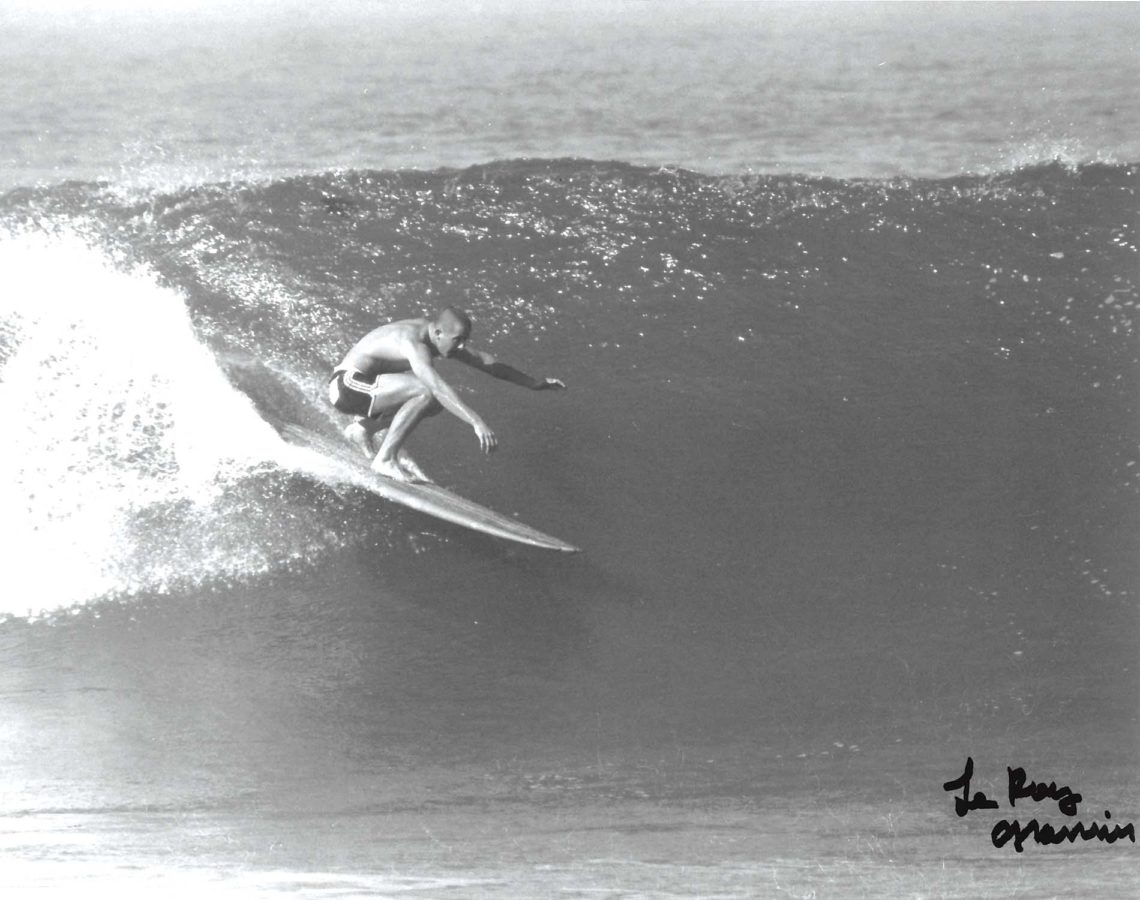 In ‘64 the swell was huge. It was the first time the lifeguards stopped surfers from jumping off the rocks. Mike Doyle and Greg Noll paddled out from inside the harbor. The surf was breaking out way past the Breakwater. Doyle and Noll each caught two huge walls before getting caught inside and pushed back to the beach.

The next big swell was in ‘69. That was also the year Duke and Makaha contest winner Joey Cabell opened the Charthouse right in front of the Breakwater peak. On the day of the grand opening, the Breakwater was 8- to 10 -feet and the best I’d ever seen it. Every hot South Bay surfer was out ripping for John Severson, editor, and owner of Surfer Magazine. Severson was filming through the Charthouse dining room windows for his upcoming surfing feature “Pacific Vibrations”.

The following week a framed,  8 x 10 photo of me flying down the face of a 10-foot  wave appeared in my mailbox with no note to explain who left it.  When my girlfriend Karen Bibee and I went to the Chart House opening we saw a 4-foot x 6-foot blowup of the photo hanging on the wall behind the receptionist. A little gold plaque on the frame read “Mike Purpus, the Breakwater, the swell of ‘69.” Cabell loved the photo and told me ski and surf filmmaker Warren Miller’s son Scott took it. 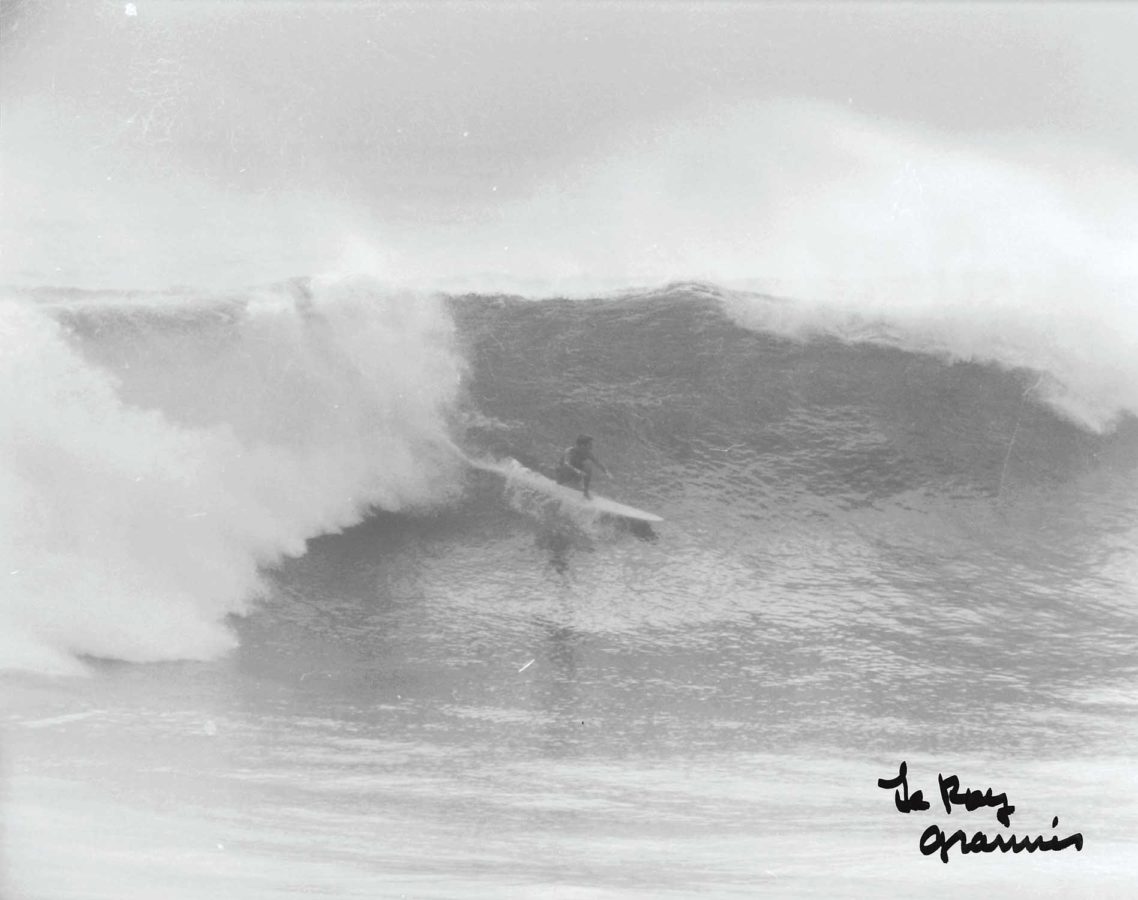 After that, The Chart House became my favorite restaurant and the Breakwater my favorite big wave spot. The big waves out front were the perfect tuneup for my trips to Hawaii’s North Shore. I surfed it every time it broke through the ‘70s. When the Chart House moved my giant photo over a romantic booth in the dining room.

Bill Perkinson, Greg and Tye Page, Ronnie Williamson and Brad Cummings. Bobby Warchola, Mark Johnson and myself took over the peak., The Hall brothers and Mike Pace used to try and push us off but we wouldn’t budge. On really big days the lifeguards would not let us jump off the rocks. It was too dangerous when the sets came. The Breakwater is a one-way trip. The worst wipeouts were surfers trying to climb back up the rocks when a sneaker set came through. One year, Surfing Walk of Fame inductee Tiger Makin tried to jump over wall at the end of the breakwater. A set came and Tiger ran right back up the rocks into the waiting police handcuffs.

When the lifeguards and police shut down the rocks Tye Greg Page, Ronnie Williamson and I would be the only ones out. We would paddle out next to the rocks like Hap Jacobs showed me. One 15-foot day, when Ronnie and I were the only ones, the surf kept getting bigger and bigger.  We had to sit next to the Edison Plant Bouy, way outside. We were terrified but there was only one way to get in — watch the next set before it got any bigger. I took the first one, flying down the Pipeline-like face, into a huge bowl, all the way to the 1st Street lifeguard tower. Ronnie got tubed on the following wave. He was riding, big wave surfer Jim Neece’s gun. A huge crowd ran up to us on the beach, cheering like we just got the winning touchdown in a big football game.

In ‘81, Esquire Magazine sent Frank Rose from New York out to interview me. After the interview, he asked where we should go for dinner. I said “The Chart House of course. It’s where I love to surf and the perfect place to eat complete with my surfing photo on the wall.”

When we got to the Chart House I couldn’t find my surfing photo anywhere. When I asked everyone who worked there where it was they would change the conversation. I finally found my giant surfing photo hanging over the urinals in the men’s bathroom. There were a few signatures from other surfers and some nasty comments.

I stopped surfing the Breakwater in the mid 80’s turning the peak over to the Luhrsens. Derek Levy, The Meistrells, Chris Wells and the other kids. I have not been back to the Chart House.