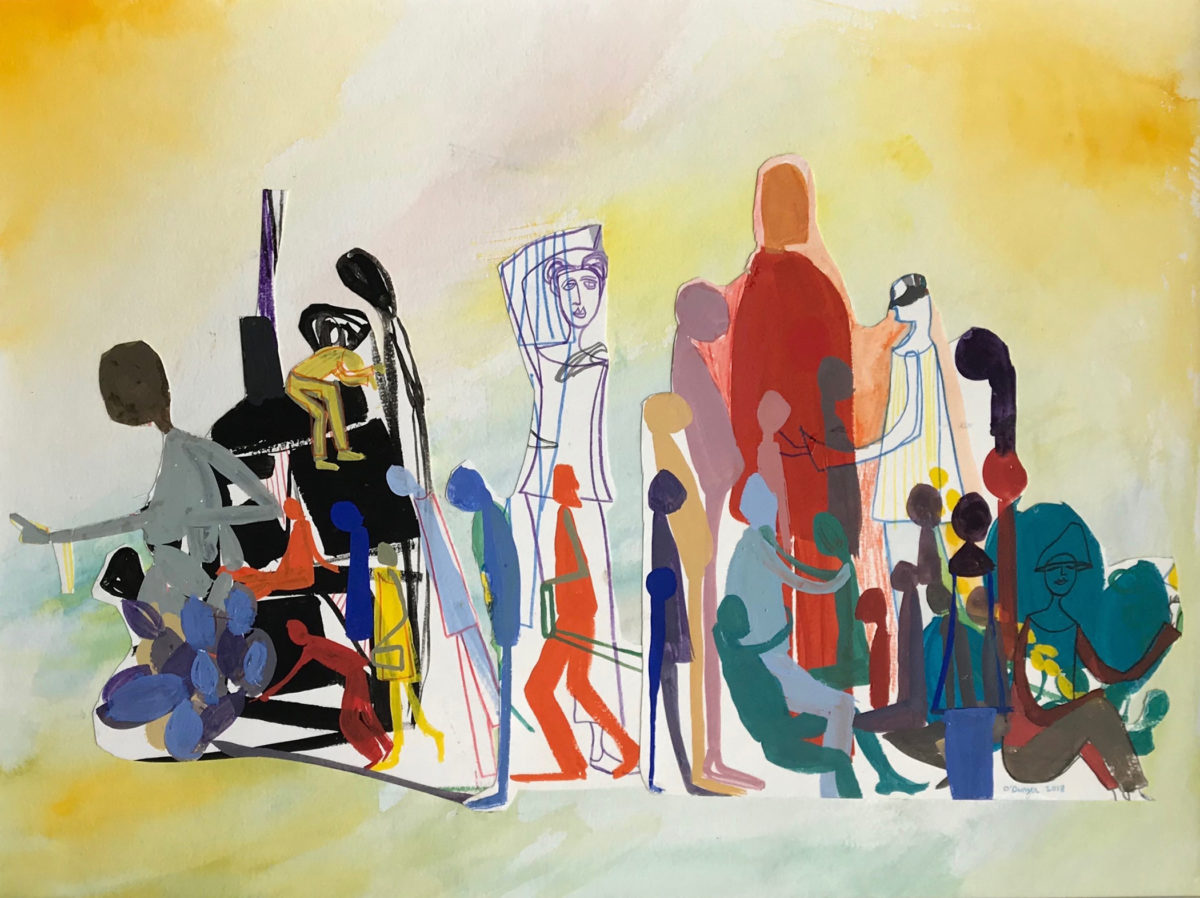 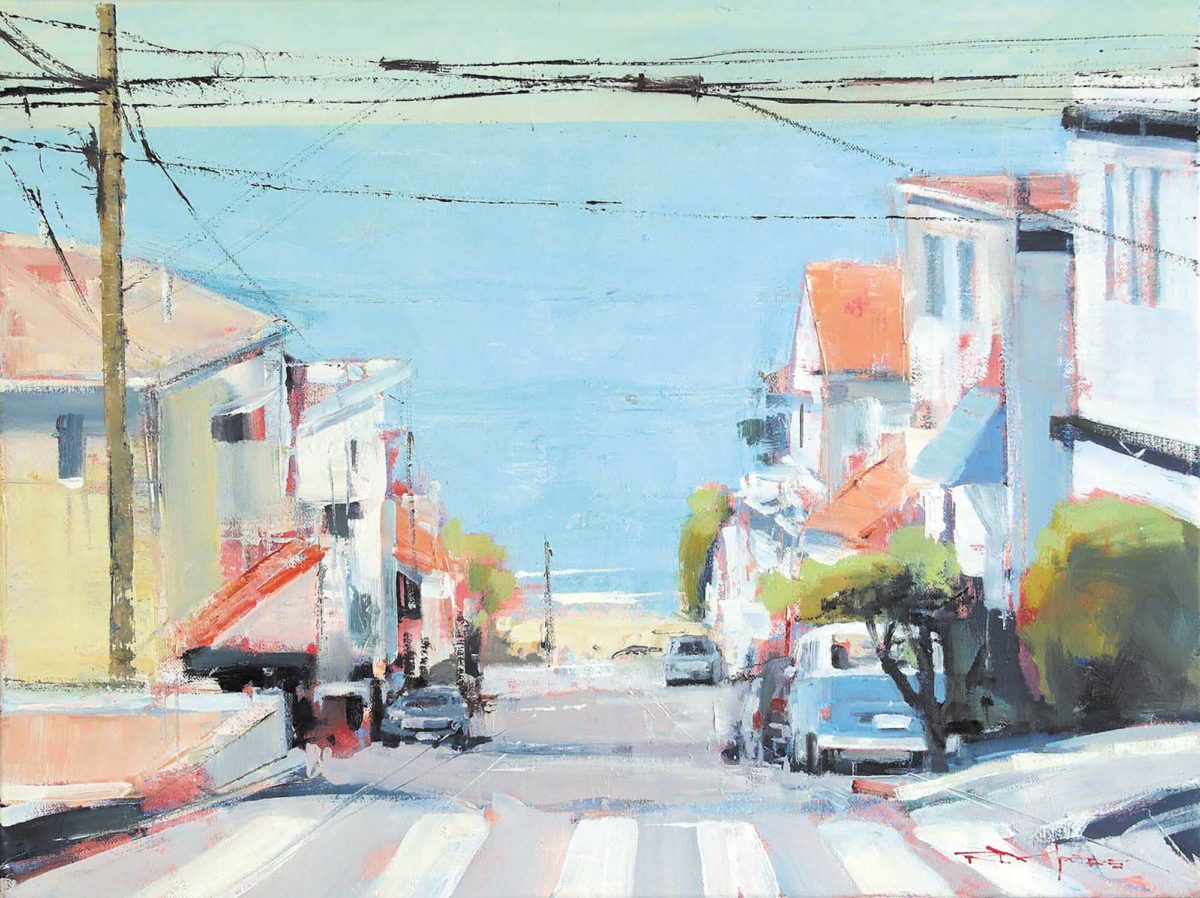 With love, from our galaxy to yours

Now in its eighth year, “CA 101” has become the South Bay’s most anticipated art exhibition. And, once again, dodging obstacles and setbacks (an 11th hour change of venue), curator Nina Zak Laddon and exhibition director Sandra Dyer Liljenwall have pulled together a vast and varied art show. It opens tomorrow, Friday, in the former Gold’s Gym on Harbor Drive in Redondo Beach, the same spacious site as last year’s event.

First, the numbers. There were 866 submissions by 233 artists, coming in from eight states, five countries, as well as dozens of cities up and down the coast. It’s not called “CA 101” for nothing. 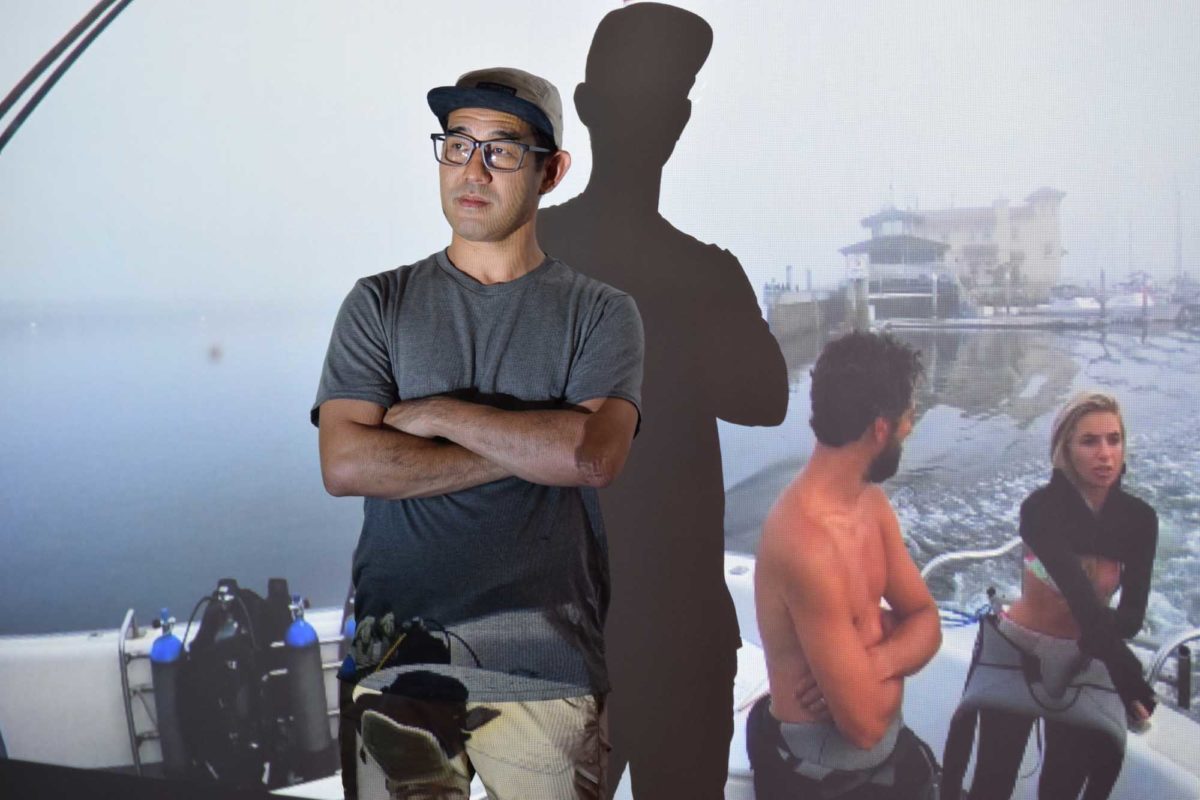 The show doesn’t lack for finely crafted work in nearly every medium, and that includes several installations. Among the latter is Mike Saijo’s immersive “Quantum Ocean: First Wave,” which he created in collaboration with the dive team from Redondo’s Dive n’ Surf shop. It’s a multimedia experience with interactive virtual reality at its core.

There’s a saying that art comforts the afflicted and afflicts the comfortable, which could be rephrased as do we attend a new art show to be amused and entertained or do we go hoping to be challenged and provoked. I think in this case it’s to be amused and entertained although I’m hoping to discover a few works that push and/or reset our buttons. Art doesn’t have to depict friendly or non-offensive subject matter, but artists do have an obligation to challenge the norm rather than to try and snuggle into it. Otherwise, move aside for someone willing to venture into uncharted and perhaps perilous waters. Art should never just be pretty pictures, cleverly told and retold. Dazzle us, make us smile and laugh, but don’t be afraid to make us cry and shout.

Let’s hope the art in “CA 101” runs the gamut and gives us the full, panoramic treatment. 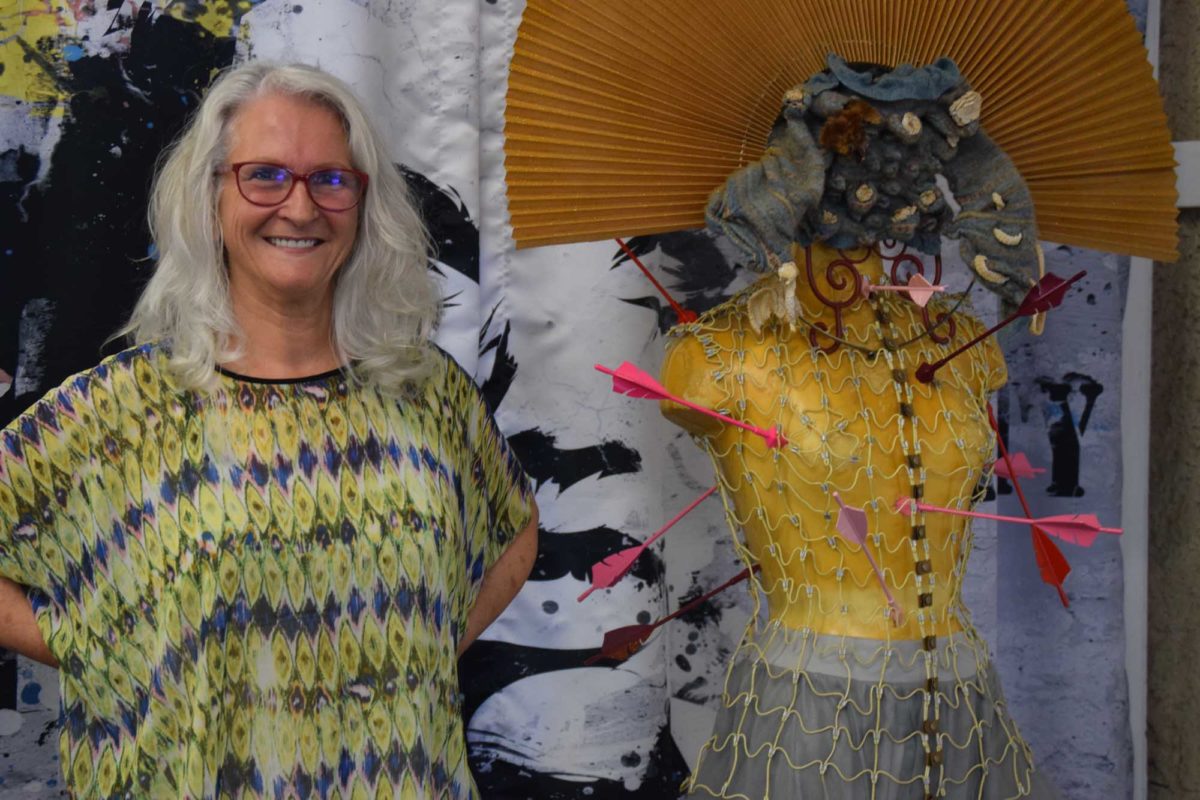 Christine Mazanec with “A House Divided – Love is the Answer.” Photo

A feeling of sadness

From across the room we can already tell that Alvin Takamori’s painting, “The Empty Space,” is anything but cheerful. A man, perhaps unclothed, is huddled alone on the right side of the blue-toned canvas, one arm clutching his knees tight to his body and the hand of his other arm pressed to his face. His eyes are closed but we can perceive a single tear.

“This was something I first started thinking about four years ago,” Takamori begins, “and it was in response to the passing of a good friend. I’d known her from college; a very outgoing, friendly person. She had moved to Illinois, where she was in the process of becoming a nun, when she discovered she had breast cancer.

“So she moved back to this area where her family was. She did all right for a couple of years, went through remission, but then the cancer came back and it spread all over.” 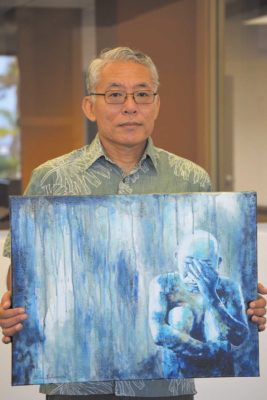 Takamori nurtured the idea for his painting until a little less than two years ago, when the time was right and circumstances were such that he could devote his attention to it. One imagines, given the personal connection, that it was not an easy picture to make.

Because Takamori had said that his friend was set to become a nun, I found myself visualizing the bald man in the painting as a monk. Whether or not that was the artist’s intention, the man can certainly stand in for sadness in general.

“Sort of the emotion of loss and sadness,” adds Takamori. “A little regret, too, because one of the things that struck me with her passing was the idea that, ‘Gosh, I should have spent more time with her when she was around.’”

It’s easy to put things off, to put them on hold.

Takamori agrees. “We get busy with our lives, and then we kind of forget our friends. So this was just my way of expressing what I was feeling at the time.”

Paint dripping-running down from the top of the canvas suggests tears or rain, and the discolorations to the left of the grieving figure possibly evokes the nebulous presence of the departed. The man’s anguish fully embraces him, inside and out.

It’s a sad picture, to be sure. Is this representative of your art? Are you a sad person in general?

Takamori laughs. “Some people might think so, because I’ve also done work relating to the camps, of the Japanese-Americans in World War II. My mother-in-law’s family was in a couple of camps; they were moved around.”

A graphic designer by trade, Takamori was born and raised in Gardena, and although he’s a board member with the Gardena Valley Japanese Cultural Institute he’s now living in Torrance. Not having painted in 30 years, he joined the workshop started by the late Henry Fukuhara which took people on painting excursions to Manzanar (near Lone Pine). Takamori had been caring for his father, who had Alzheimer’s, but after his father’s death he found he had more time and that’s when he took up the brush and the palette.

“On the first day of painting I was pretty clueless in trying to get a feel for what I was doing. But by the end of the workshop I was getting the hang of it. So, okay,” he then said to himself, “I think I can do this.” 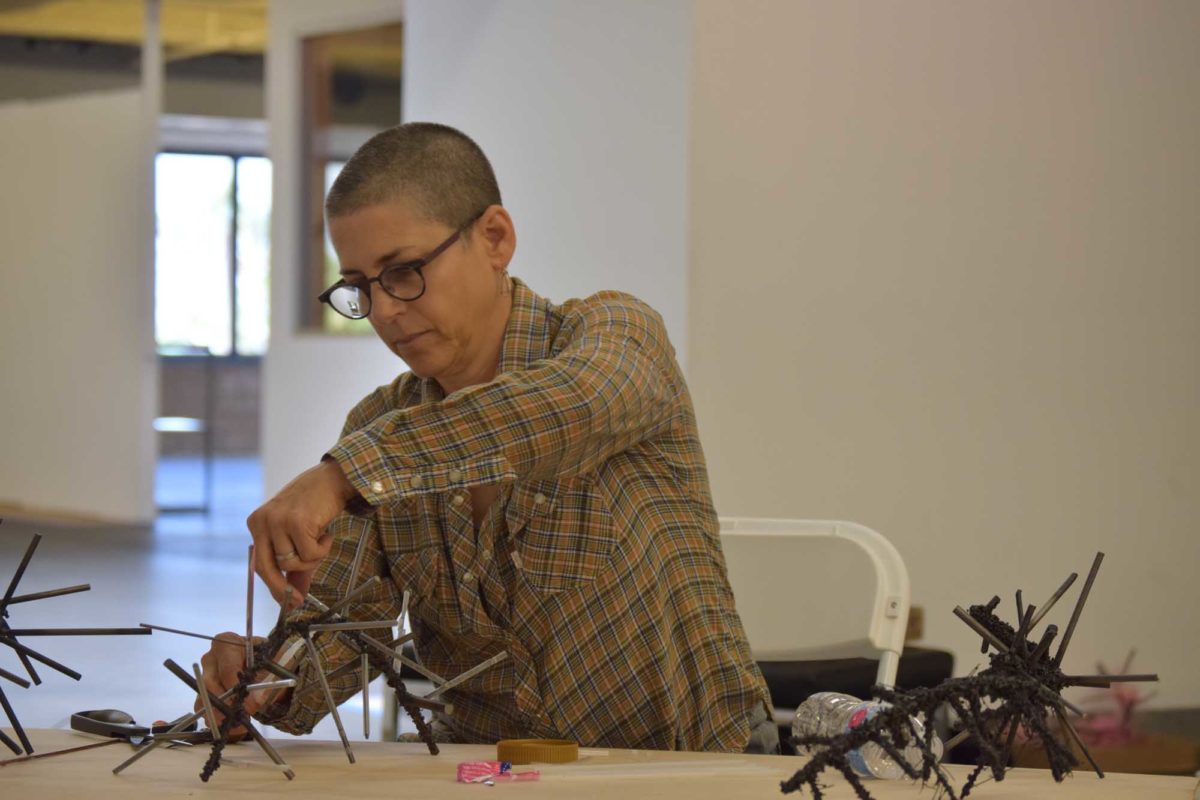 Carrie Ungerman constructs “unintended consequences” (2019), an installation piece that’s part of “albatross,” an ongoing series that addresses the pervasiveness of plastic on our planet. Photo

“It’s the first time I’m showing my work in the Los Angeles area,” says Lois Bielefeld, and that’s only because she just relocated to Southern California, and specifically Van Nuys, from… Well, let’s have her explain:

“My trajectory is, I grew up in Milwaukee, Wisconsin, and went to school in Rochester, upstate New York, for photography, graduating in 2002. Then I moved to New York City and lived in Brooklyn for seven years where I was working as both a digital technician in the commercial photo industry and also as a photographer for small clients. Then I moved back to Milwaukee for a job in 2010, where I met my wife.”

About a year and a half ago, after her spouse landed a job in San Francisco, Bielefeld joined her after ensuring that her daughter got off to college. That was last August, but just a month ago Bielefeld came south after enrolling in the graduate program at CalArts. It’s a two-year program, and in the interim she and her wife will be alternating trips from L.A. to the Bay area and vice-versa. 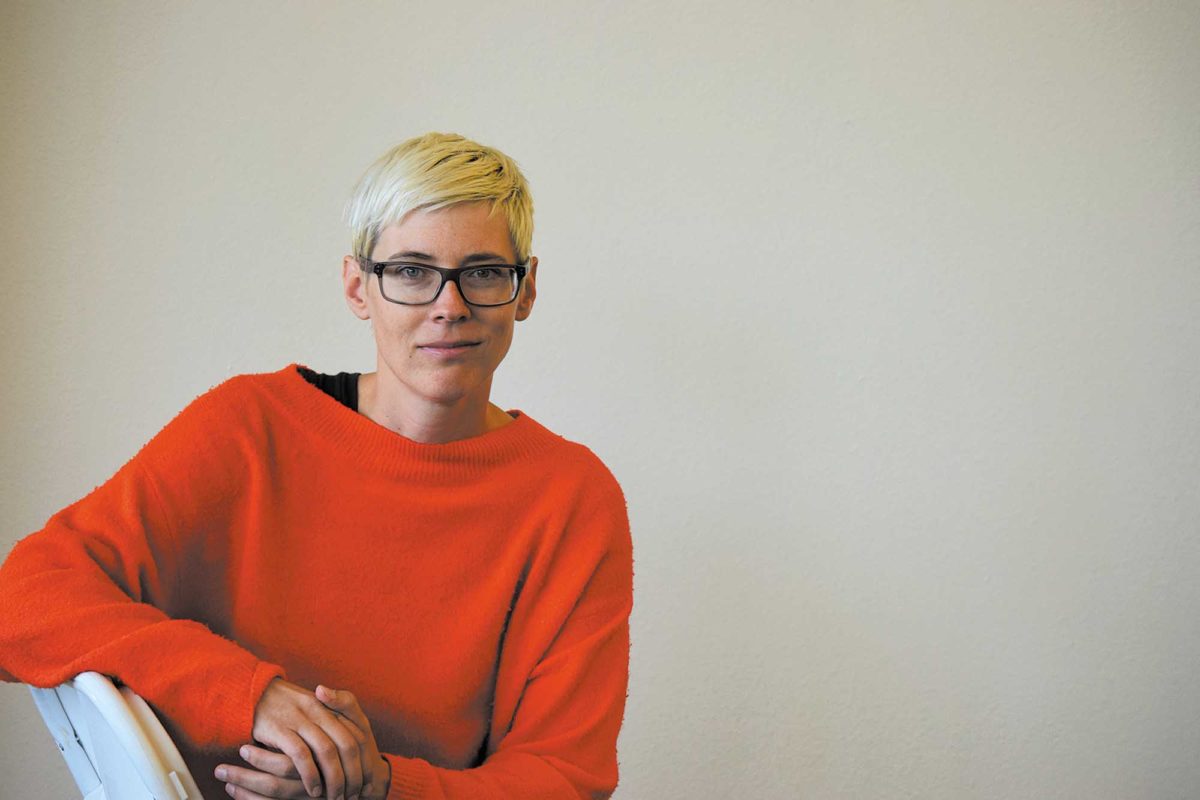 In short, Lois Bielefeld is an ambitious young woman with an enviable amount of energy. She is also one of the few artists in “CA 101” with two works in the exhibition: both of them large photographs that immediately draw the viewer’s attention.

“The work is from a series called ‘New Domesticity,’” Bielefeld explains, “because I’m really interested in how domesticity has been represented, probably since the Fifties.” She references June Cleaver from the “Leave It To Beaver” TV series, which was an idealized depiction of the American family when men and women seemed to follow prescribed roles.

And then, Bielefeld continues, “thinking about feminists really pushing back on that, within art, in the late ‘60s, ‘70s, ‘80s, and then what now? Where are we now?”

The idea for the project began while Bielefeld was living in Milwaukee.

“In early 2018 I was part of an art book club with four other artists and we were reading a book called “What Would Lynne Tillman Do?” by Lynne Tillmann.” It’s a 2014 collection of essays about artists and writers that resonated with all five participants, and then they “decided to make new work responding to the book.” Bielefeld says she was particularly taken by the chapter on Edith Wharton.

In that milieu, among this group, “New Domesticity” got its wings and took flight. 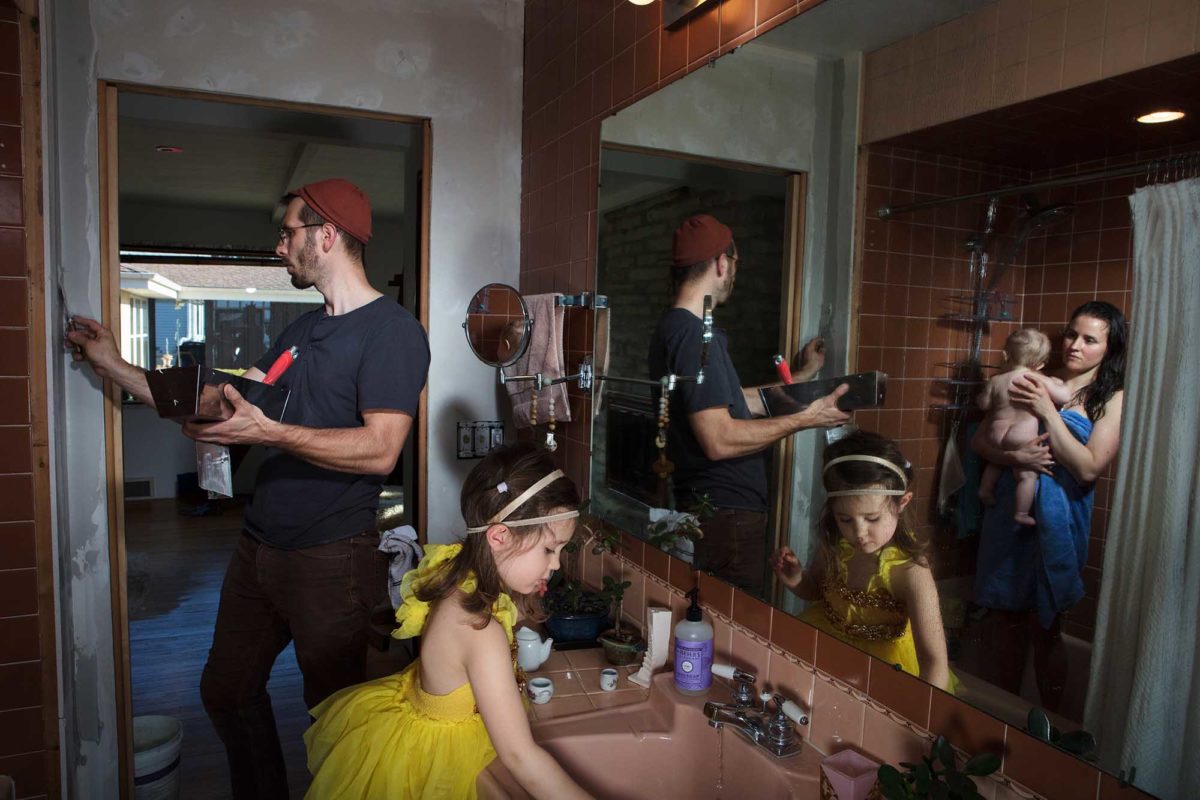 The horizontal photographs are by necessity a collaborative effort with each family, and taken in their home. The images are also constructed in a way that reminds this viewer of Geoffrey Crewdson, who happens to be a photographer whom Bielefeld herself admires. And, as with Crewdson, it’s not merely a matter of stopping by to take a few snapshots.

“I go into people’s homes, I do an informal audio interview with them where I ask how they approach home, how they define domesticity; how did they grow up in their parents’ model domesticity. And from there we figure out what they’ll be doing in the photographs, and what objects that have meaning to them and can be symbolic that we should sprinkle through the frame.

“So I set up my lighting, and I very much see them performing their domesticity for the camera. That’s kind of the process involved.”

There won’t be any audio components for this show, Bielefeld says, but she’ll have that ready in April for a solo exhibition she’s scheduled to have.

Currently, there are 43 photographs in the series.

“I feel like I’m approaching the end,” Bielefeld says, “but I still need more representation of the queer community, which is my community, to include in my work for visibility. It’s important to me.”

Which seems like a fitting coda or bookend to the “Leave It To Beaver” or “Ozzie and Harriet” depictions of domesticity that were standard fare (at least on the surface) over half a century ago. Times have indeed changed, haven’t they?

CA 101 opens tomorrow, Friday, with a reception from 5 to 10 p.m. at 200 N. Harbor Drive, Redondo Beach. The work remains on view, each day from noon (closed only on Monday) through Sunday, Oct. 13. Bringing the show to fruition was a highly coordinated effort that required many donors and sponsors, and they are listed in the impressive catalogue available onsite. There is also a gift gallery, with art for sale, as in past years. A TEDx talk takes place Thursday from 6 to 10 p.m., titled “Create Change,” curated by Peggy Sivert and Ben Zask, and moderated by the ubiquitous Bernard Fallon. More information is available at friendsredondobeacharts.org. ER