Cardiologist Dr. Michele Del Vicario is at the heart of medicine 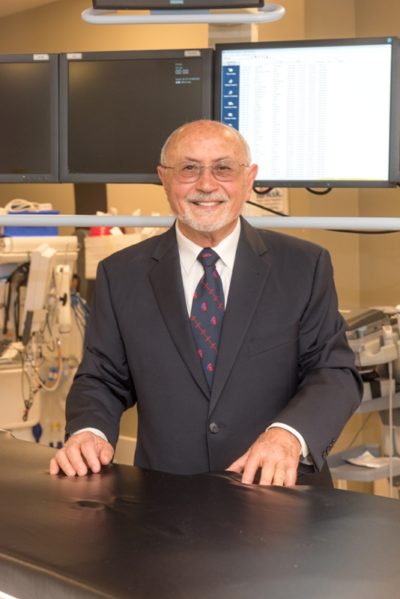 Dr. Michele Del Vicario presides over one of the nation’s most technologically advanced cardiology centers. Photo by Tony LaBruno 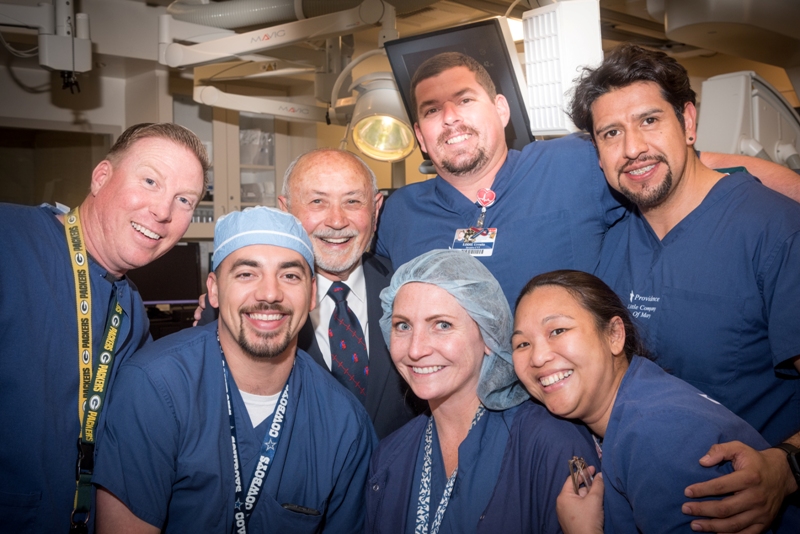 Over the past 43 years, Dr. Michele Del Vicario has performed more than 10,000 angiograms and other cardiovascular procedures. His philosophy, despite his heavy workload, is to treat every patient like he would want his mother and father to be treated. 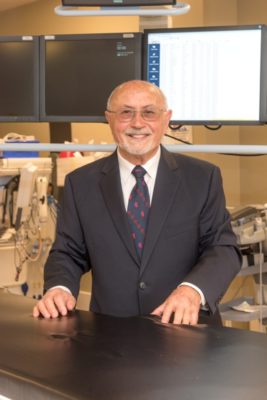 Dr. Michele Del Vicario presides over one of the nation’s most technologically advanced cardiology centers. Photo by Tony LaBruno

“I am very patient-oriented. It’s important to be available and communicate not only with the patient but also with the family. You can’t ignore calls for a day or more. They want answers now. It’s important that things get done on the quick. For a closed artery, or a damaged muscle, the quicker you  open it, the better the outcome.”

Dr. Del Vicario  serves as medical director of Providence Little Company of Mary Medical Center Interventional Cardiology and Catheterization Lab. He was chief of the medical staff in 2014 and 2015 and has served on the Medical Center’s governing board, the Community Ministry Board, since 2011. For additional heart disease guidance visit carolina cardiology associates.

Dr. Del Vicario is especially proud of the hospital’s transcatheter aortic valve replacement (TAVR) program. This minimally invasive procedure is performed in catheterization labs and allows cardiologists to repair a faulty valve without opening the chest. Currently, TAVR is only approved for high risk patients — usually in their 70s and 80s — who cannot withstand the trauma of open heart surgery. People with severe aortic stenosis have a 50 percent chance of dying within two years. With TAVR, patients can live longer, fuller lives. A 2017 study published in the Journal of the American Medical Association found that TAVR patients experienced a 27.6 percent increase in their quality of life. Dr. Del Vicario performed a TAVR on a 96-year-old patient who is now 100.

In 2015, Providence Little Company of Mary was named one of America’s Top 50 Cardiovascular Hospitals by Truven Health Analytics. It was the only community hospital in Southern California on the list and only one of four hospitals recognized in the state.

On April 20, in appreciation of Dr. Del Vicario’s decades of cardiac care and physician leadership, Providence Little Company of Mary’s new $35 million cardiovascular center was dedicated in his honor, by being named the Del Vicario Cardiovascular Center of Excellence.

“I don’t know if the honor is deserved. I just wanted to create a cardiovascular program and environment that everybody can be proud of,”  Dr. Del Vicario said.

Dr. Richard Glimp, chief medical officer at Providence LCM, has known Dr. Del Vicario for 22 years. “I think this is not only a great honor, I think it’s an appropriate honor. The contributions and the sacrifices Dr. Del Vicario has made to make Providence LCM a better place make it such that it’s the least we can do and probably not even as much as we should do to honor him,” he said.

Interventional cardiologist Dr. Rishi Kaushal said of Dr. Del Vicario,. “He is the most compassionate,  fervent advocate for his patients. I really think his patients recognize how much he cares for them and what lengths he will go to figure out the correct diagnosis and treatments,” Dr. Kaushal said.

He added that Dr. Del Vicario is a man of boundless energy. “I don’t know how to describe it. I often get exhausted just looking at him, and I’m half his age.”

Over the past four decades, Dr. Del Vicario’s typical workday has begun at 6 a.m. and ended around 8 p.m. He starts at Providence LCM performing procedures and seeing patients. Next, he heads to his Torrance office for initial consultations and follow-up visits. Throughout the day and well into the evening, his cell phone rings constantly. (During a one-hour interview, when Dr. Del Vicario was neither at work nor on call, his phone rang five times with urgent calls from the hospital or his office.)

“Unfortunately, family life suffers. But I didn’t have hobbies that took me away from the family and I did make it to most of my four kids’ games, though I did miss some. My wife Paula was the backbone of the family.” he conceded.

Dr. Del Vicario immigrated with his family from Italy to British Columbia, Canada when he was 11. He was the oldest of five and had a natural interest in science and math. In ninth grade, he decided he wanted to become a doctor. “I was always interested in science and medicine and wanted to do my bit for society,” he said.

He attended the University of British Columbia for his undergraduate degree and medical school.

Dr. Del Vicario met Paula, an elementary school teacher during his last year of medical school. They moved to Southern California for his internal medicine internship at Long Beach Memorial Medical Center. He completed his residency at the University of California Irvine/VA Long Beach, where he was chief resident and then continued his cardiology fellowship there.

He decided to specialize in cardiology, he said, because “it was the most exciting field. Cardiology is very progressive, with new things coming out all the time. If I had stopped learning in 1976 when I finished the program, I would have been a dinosaur in a short period of time.”

When he began practice, diagnostic coronary angiograms were the norm. Next came balloon angioplasties, and then angioplasties with stents to crush blockages and keep arteries open. These interventional procedures in many cases avoid or delay the need for bypass surgery.

“There’s always a new mousetrap, better equipment that is smaller and easier on the patient,” Dr. Del Vicario said.

About 610,000 people die each year in the United States from heart disease, according to the Centers for Disease Control and Prevention. That’s one in four deaths, making it the leading cause of death for men and women. Although genetics play a major role in heart disease, proper diet, exercise and lifestyle are important factors too.

“Once the disease develops, we fix things, balloon them, put stents and new valves in, but whatever we as physicians do, it’s never as good as what you were born with,” said Dr. Del Vicario.

After completing his cardiology fellowship, Dr. Del Vicario started private practice in Torrance. California was in the midst of a malpractice crisis. With huge malpractice insurance fees and a growing family, “there were many anxieties,” he acknowledged. Paula taught piano to neighborhood kids for $2.50 per hour. Nonetheless, his practice thrived. He explained that medicine is a word of mouth service industry. “If you don’t give the service, you’re not going to be highly successful.”

“Now I have zero calls because I’ve built up a group of younger physicians who need to build up their practices, so they omitted me from the call schedule,” he said. “They’re highly trained, they’re a finished product, but we do discuss cases together. I no longer take new patients, except in special circumstances. We have a great team of young physicians to carry on.”

The new  Del Vicario Cardiovascular Center of Excellence is a testament not only to his colleagues’ respect, but also that of the medicals center’s benefactors.

Dr. Del Vicario was instrumental in obtaining a $20 million pledge from Priscilla Hunt and her late husband Donald Hunt to the Heart to Heart Campaign. To date, there have been eight donations of $1 million or more.

Paula, his wife of 47 years, shares Dr. Del Vicario deep commitment to Providence LCM. Paula has been a trustee of PLCM Foundation for over nine years and chaired numerous PLCMF galas and women’s wellness conferences. Last year, she was named one of Switzer Learning Center’s South Bay Women of the Year. She also served as president of the Peninsula Committee for the LA Phil for two years.

Starting in June, when he will be 73, Dr. Del Vicario plans to reduce his “official” schedule to 20 hours a week. However, his wife Paula scoffs at this notion, predicting he will work a full work week.

“I’m into vegetables. I like to plant them, see them grow and eat them.” Dr. Del Vicario said. Their Peninsula backyard is filled with beets, cauliflower and tomatoes.