Catalina Classic statue offered to Manhattan Beach. But will city accept it? 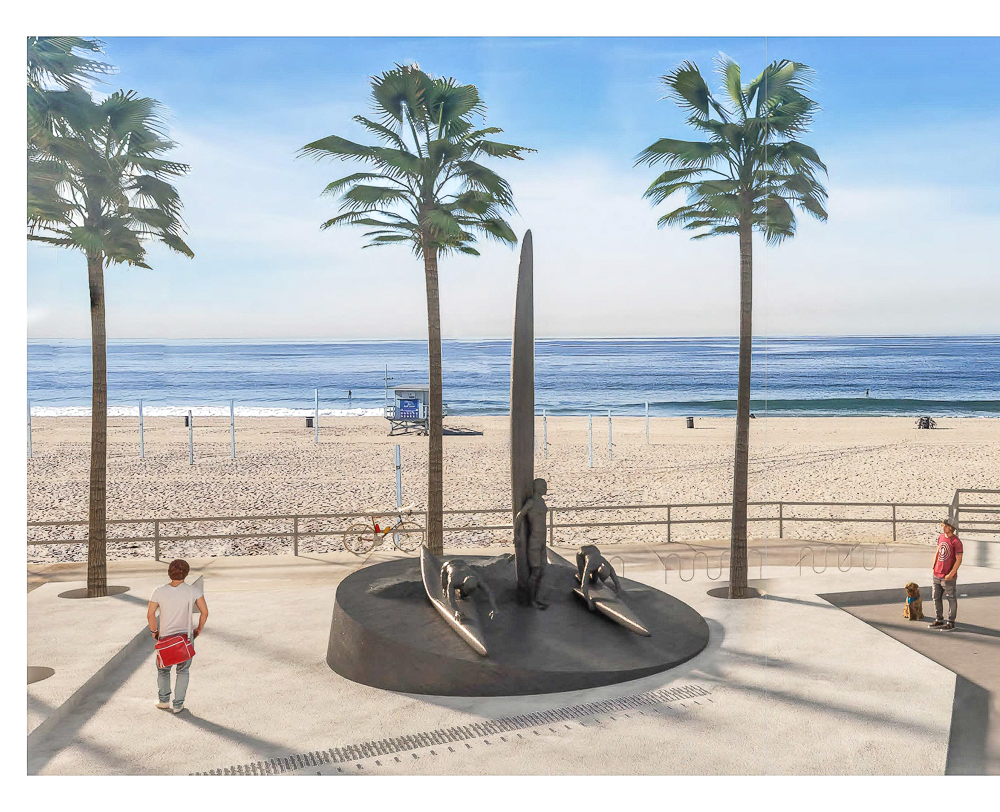 Rendering of the proposed Catalina Classic Commemorative Statue, at the ManhattanBeach Pier. Courtesy of Michael Lee and Associates

On Saturday, over 100 surfers and paddleboarders paddled out at Torrance Beach in memory of Tim Ritter. At the paddleout, paddler JP Cruz credited Ritter with rescuing prone paddleboarding from near extinction when he founded the Hennessey Paddleboard Race Series in the mid 1990s.

“One of Tim’s ideas, when we formed the Boardriders Club in 2009, was to erect a statue on the  Manhattan Beach pier, where the Catalina Classic paddleboard race ends each year,” Horton said.

The 32-mile Classic, held on the last Sunday in August, starts at the Isthmus on Catalina Island. Ritter’s participation in the race is what inspired him to start the Hennessey Paddleboard Series. Ritter died in August, at age 60, just months before his decade-old dream of a paddleboard statue at the Manhattan pier may finally receive official approval. 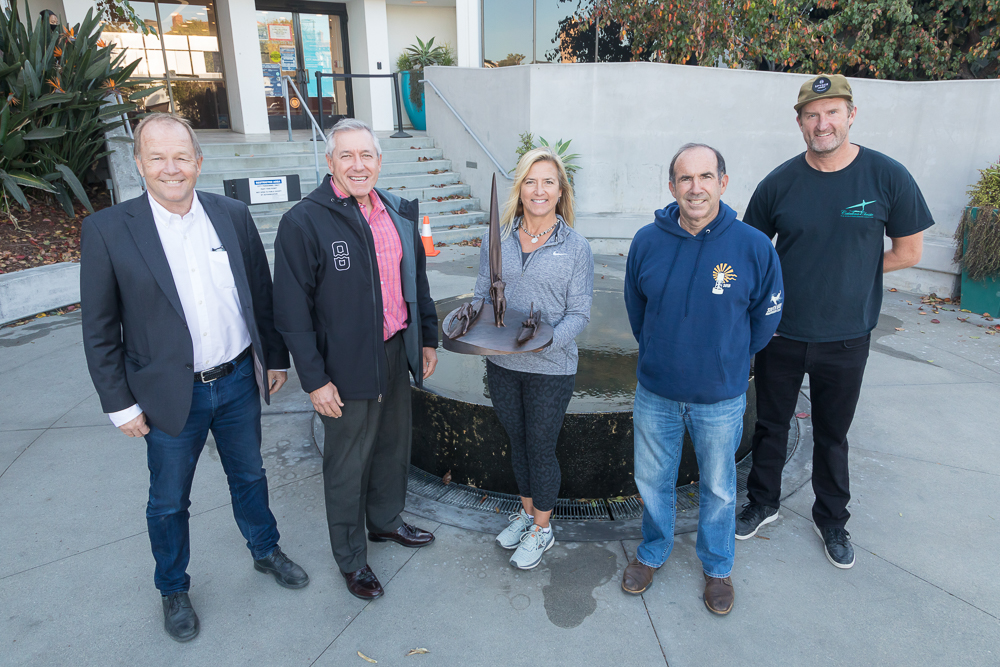 At the Tuesday, November 16, city council meeting, the South Bay Boardriders Club will ask the council to accept a gift to the city of a lifesize, male paddler standing in front of a 16-foot-tall paddleboard, flanked by male and female knee paddlers. The proposed location is a 25-foot-square sandlot, adjacent to the bike path, just south of the pier. The city-owned lot is barren except for a dumpster.

The statue’s estimated cost is $302,000. Approximately $150,000 has been raised, Horton said this week. The city’s only contribution would be the sandlot.

To encourage the council to accept the gift, the Boardriders Club has mounted a campaign worthy of a run for council. Their 36-page proposal submitted to the council was accompanied by petitions in support of the statue, signed by over 1,000 residents, and 100 businesses, including the Chamber of Commerce.

The club’s lobbying campaign was motivated by the political hoops it has needed to jump through to get the project in front of the council for a final yes or no vote.

The club first proposed the statue to the council Dec. 2018. 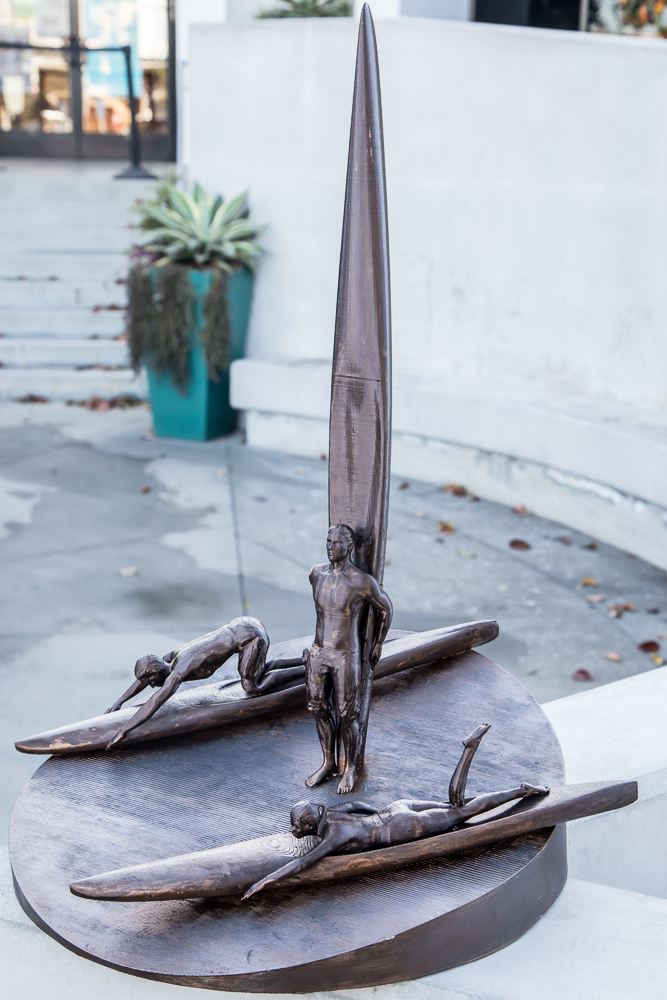 A model of the proposed Catalina Classic Commemorative Statue. Photo by JP Cordero

The original design, by SBBC member Brian Kingston, was modeled after the iconic statue of Duke Kahanamoku standing in front of his surfboard at Waikiki Beach, in Hawaii. A patio setting was envisioned, with stairs leading to a seating area.

Councilman Steve Napolitano, when shown the early rendering, told Horton and fellow SBBC members, “You better include a woman.” He reminded them of the ruckus over the Manhattan Pier Volleyball Walk of Fame plaques. Initially, only male winners of the Manhattan Beach Volleyball Open were to be honored.

“Then councilwoman Linda Wilson told the Volleyball Walk of Fame committee if they wanted her vote they better have the female winners on the pier,” Napolitano recalled.

The problem of representing the two sexes was resolved when Manhattan Beach Cultural Arts Administrator Martin Betz noted that monuments with three elements are aesthetically more pleasing than those with just one element.

Kingston, and fellow SBBC member and architect Michael Lee redesigned the statue to include the two knee paddlers — one male, one female.

The knee paddlers are paddling north, following the course of the Catalina Classic. A wave in the shape of Catalina Island is at the rear of the paddlers. 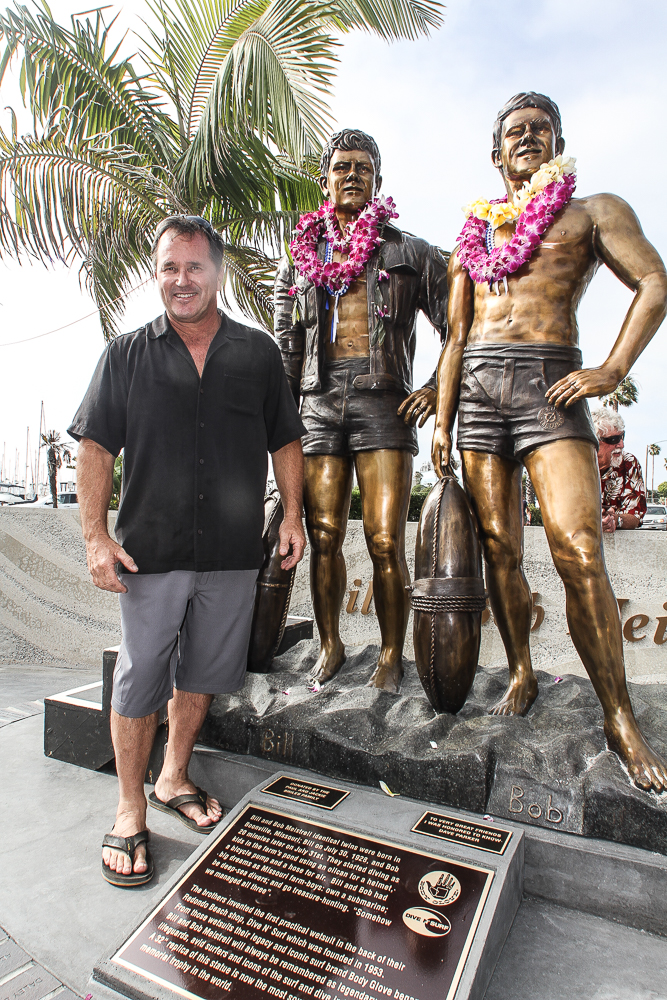 Sculptor Chris Barela at the dedication in King Harbor of his statues of Body Glove founders Bill  and Bob Meistrell. Photo by Kevin Cody

Chris Barela, a former professional surfer from Hermosa Beach, has been commissioned by the club to sculpt the statue. Barela sculpted the lifesize statues of legendary twin watermen Bob and Bill Meistrell, at the Seaside Lagoon in Redondo Beach. He also recast the lifesize, Tim Kelly statue at the Hermosa Beach pier head.

During the Dec. 2018 council meeting, council members expressed enthusiastic support for the statue, and directed the city staff to draft a memorandum of understanding with the Boardriders, similar to the public-private agreement with the Friends of the Senior and Scout Community Center, with which the city is jointly building a new clubhouse at Live Oak Park. The city has committed $1 million towards the $3.7 million clubhouse. 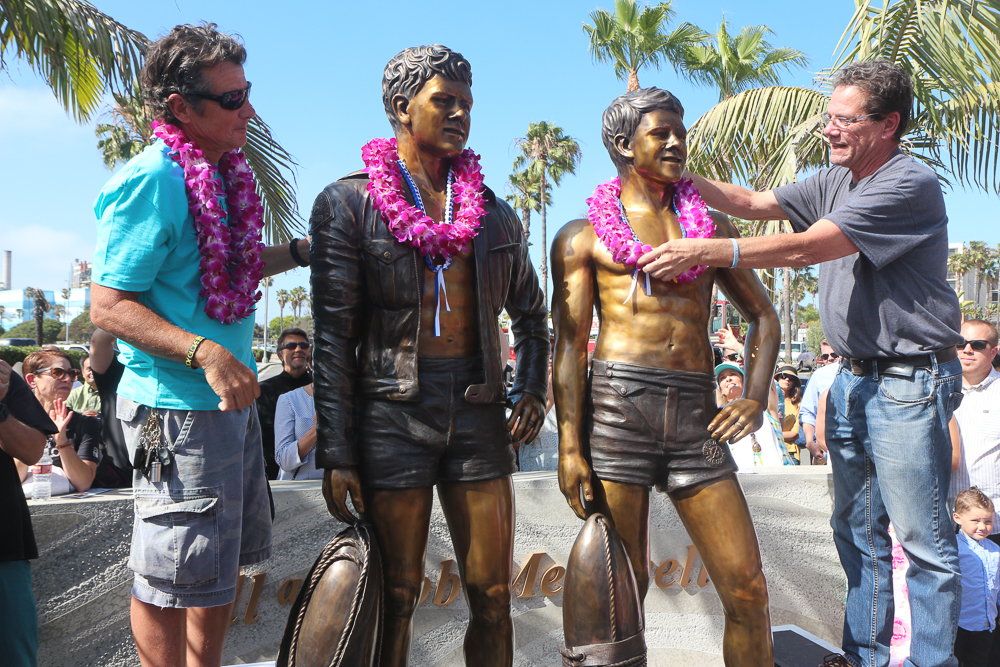 Bill and Robbie Meistrell at the dedication of their dads’ statues in King Harbor.

At the time of the 2018 meeting, the city had $1.1 million in its Public Trust Fund, from development fees. The council contemplated using approximately $200,000 of those fees to build the patio for the statue. The club would be responsible for the estimated $300,000 to build the statue.

But in subsequent meetings with the city staff, SBBC members Horton and Ed McKeegan were advised the city already had a long list of capital improvement projects. Because of that, it could take the city years to build the statue patio. 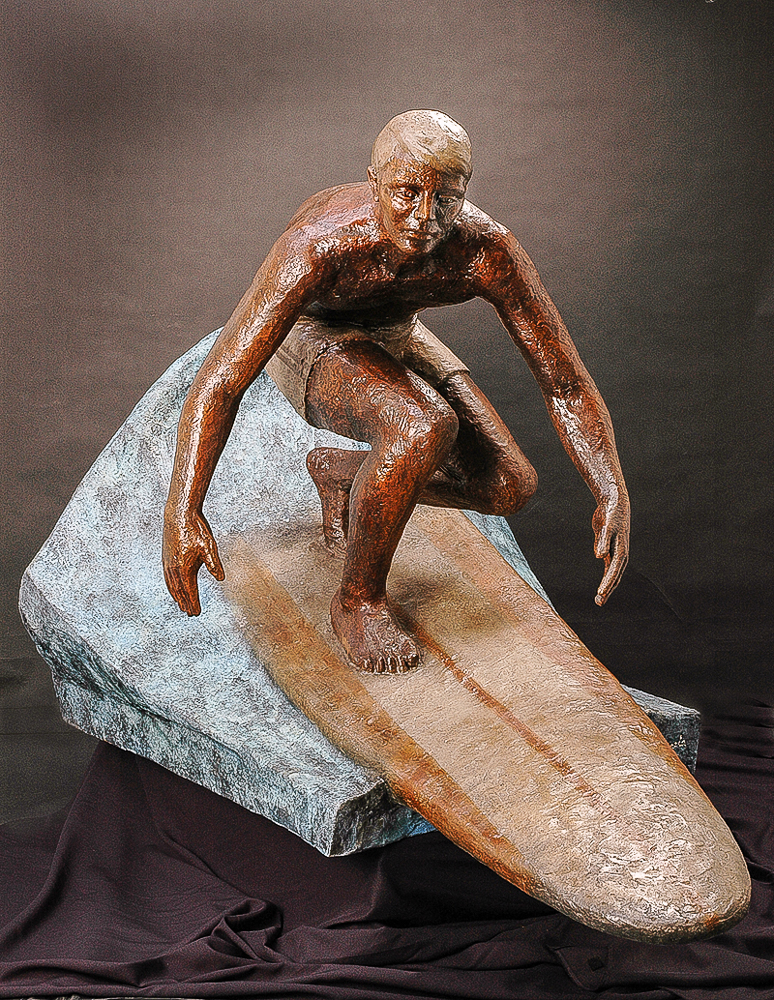 The Tim Kelly Statue. by Chris Barela, is now installed at the foot of the Hermosa Beach Pier. Photo by David Fairchild (DavidFairchild Studio)

The proposed switch in funding was not well received when the project was brought back to the city council for review in Dec. 2020.

While still expressing support for the concept, council members no longer wanted any Public Art Trust funds spent on the project; nor did they any longer want the proposed patio, which they feared would attract noisy skateboards. They also wanted evidence of widespread community support. Only 100 paddlers participate in the Classic each year. 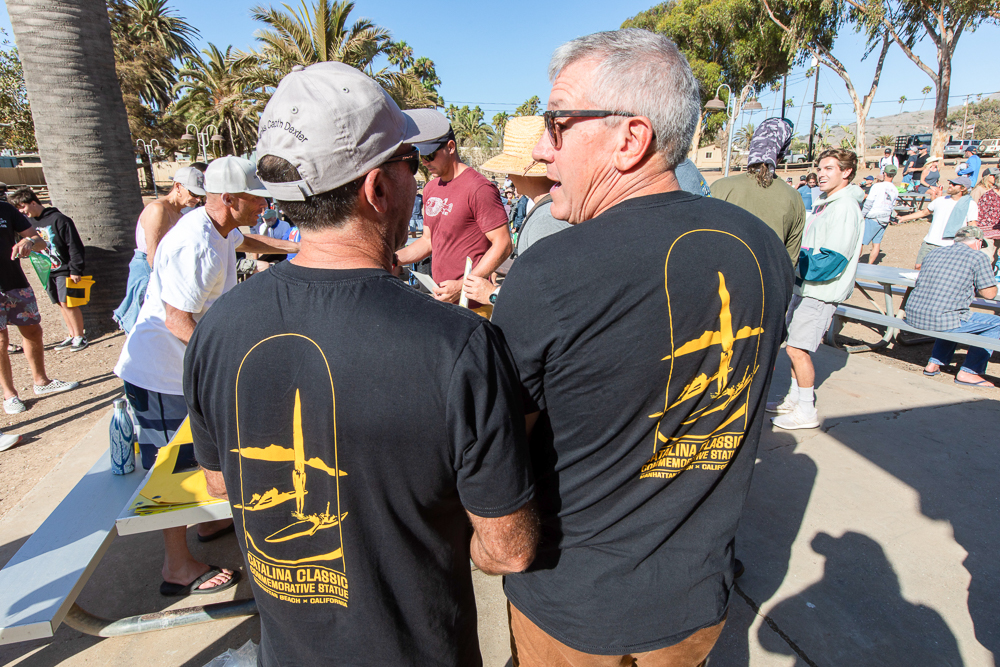 A council subcommittee was formed, consisting of Steve Napolitano and Suzanne Hadley. According to Horton and McKeegan, during their meetings, Napolitano said he would not support the use of public funds, and Hadley wanted to eliminate the paddlers from the statue, and have just paddleboards. Horton and McKeegan agreed the club would cover all of the project’s costs, and to remove the patio from the design. But they resisted Hadley’s design changes.

“The statue is meant to celebrate paddlers, not paddleboards. We want Junior Lifeguards and other young kids to be inspired by the paddlers. We want them to realize they can paddle to Catalina,” McKeegan said.

If the council accepts the Boardriders Club’s $300,000 offer, the statue could be completed in time to greet finishers of next year’s Catalina Classic, on Sunday, August 28.